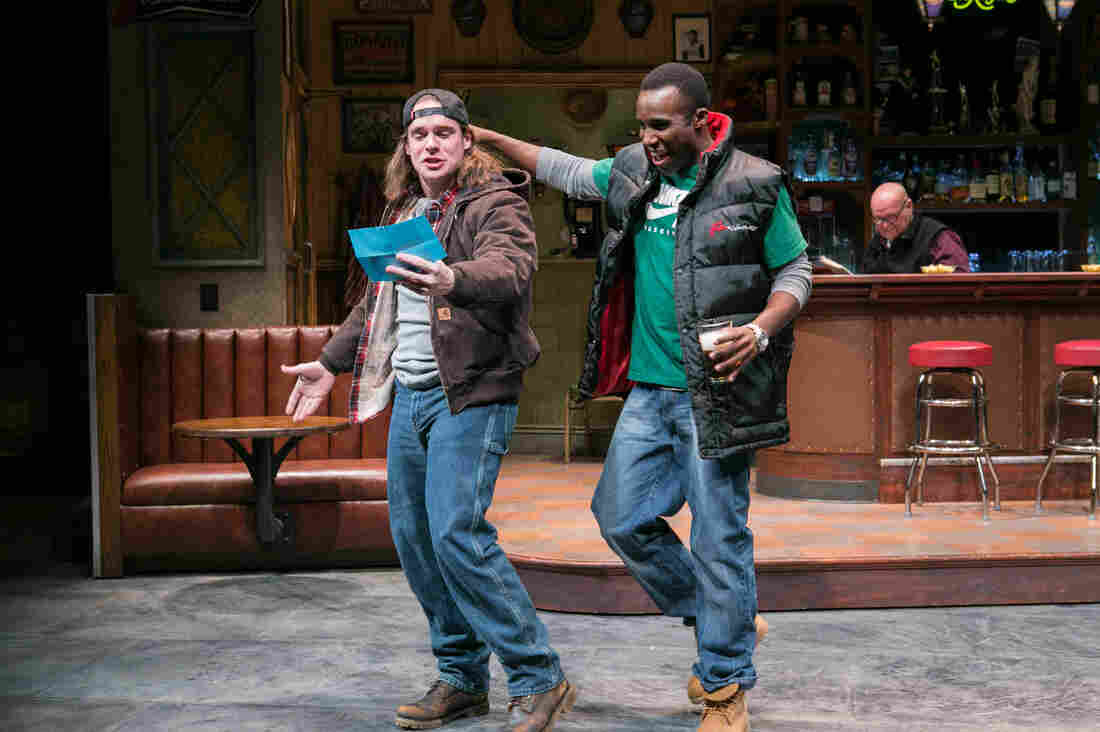 The aptly titled Sweat is all about work — and the fear of losing it. In the new play by Pulitzer Prize-winning writer Lynn Nottage, change is coming for workers at a steel tubing plant. "They've got buttons now that can replace all of us," one character says. Sure enough, the company is about to move production to Mexico and ask longtime union workers to accept lower wages. They refuse, and end up locked out and replaced by immigrant labor.

It's a scenario that has played out many times over decades in cities like Reading, Pa., where Sweat takes place. In 2011, Nottage was commissioned to write a play for "American Revolutions: The United States History Cycle," a series of plays produced by the Oregon Shakespeare Festival. Nottage says she wanted to write about "how poverty and economic stagnation were shifting the American narrative." 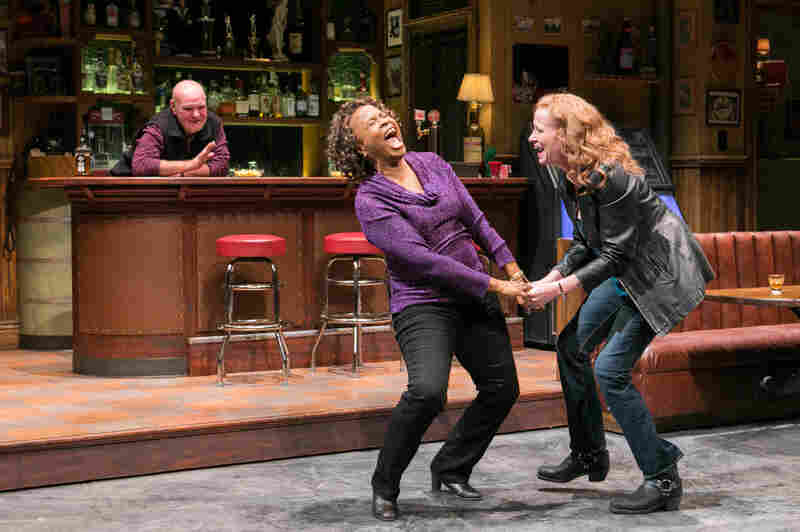 Nottage spent two years getting to know Reading residents as she was writing the characters in Sweat. (Above) Jack Willis as Stan, Kimberly Scott as Cynthia and Johanna Day as Tracey. Colin Hovde/C. Stanley Photography/Arena Stage hide caption 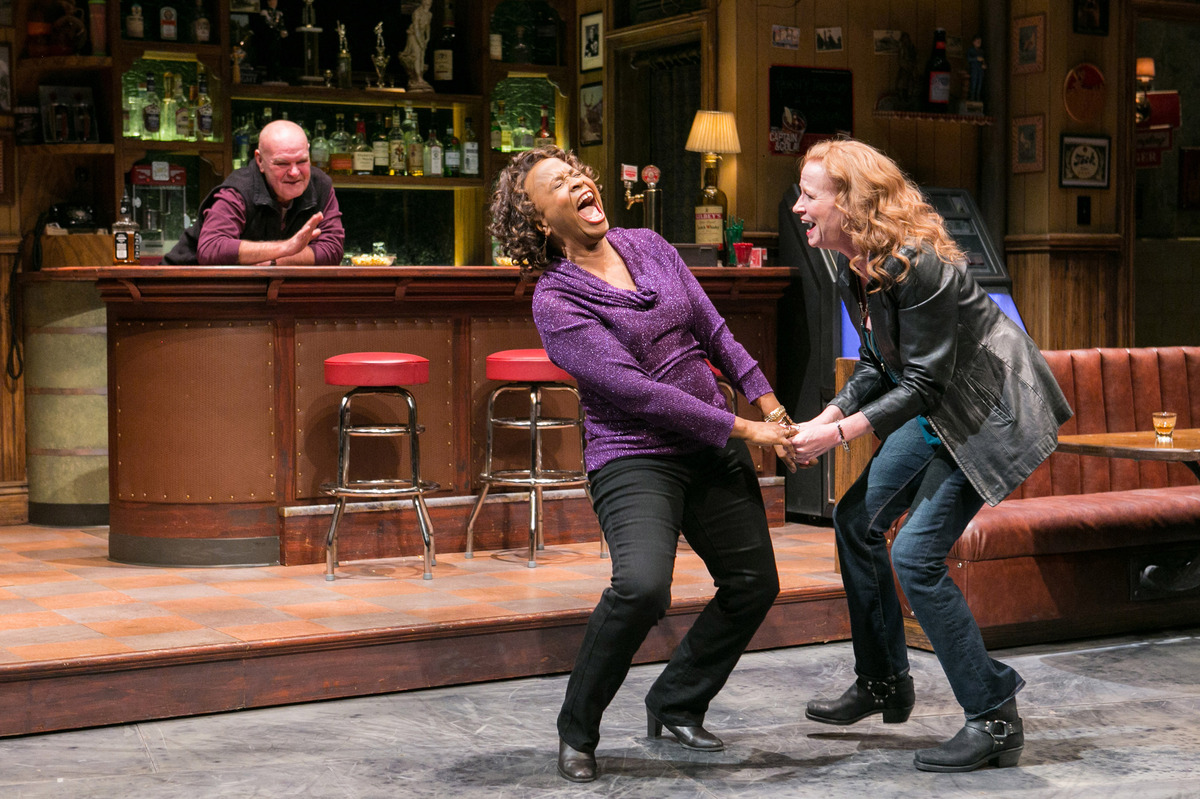 Nottage spent two years getting to know Reading residents as she was writing the characters in Sweat. (Above) Jack Willis as Stan, Kimberly Scott as Cynthia and Johanna Day as Tracey.

At the time, Reading had been named the poorest city in the country by the Census Bureau. Nottage — who's known for deep investigations into her subjects — spent more than two years visiting Reading and getting to know the people there. She says she met families where parents and children alike had factory jobs and union cards.

"Two generations of people had worked in the same factory ..." she explains. "One card was passed from father to son or mother to daughter. That's just the way it functioned. These were very good jobs. People were making livable wages. People had bought homes and had really established roots in a city like Reading because there was work — and there was decent work."

Nottage met factory workers, business leaders, public officials, teachers, social workers and artists. She got to know a local union leader, Dean Showers, who worked at a steel tubing plant for 38 years. Just like in the play, Showers and about 50 other workers have been locked out of their plant for almost five years.

Sweat goes back and forth in time — between 2000 and 2008 — before and after an act of violence we don't see until the end. There aren't really any good guys. Workers gripe about the union, complain about the physical labor, and are hardly a united front. Those who are happy with the status quo are bitter toward those who hope to one day get off the factory floor.

Showers attended a preview of Sweat at Arena Stage in Washington, D.C., and says the characters ring true. He started working in the steel tubing plant when he was 18. He went to college but dropped out. Now he's 62 and locked out of his job.

People always said 'Reading was ...' and no one ever spoke of their city in present tense — they always spoke of it in past tense. And that really broke my heart.

Lynn Nottage, on talking to residents of Reading, Pa.

"I was making really great money for a single, young teenager who didn't know what he wanted to do," Showers says. "Yeah, there's a lot of regret to that. ... The only thing that's good is I can be a better adviser to my daughter. And I've told her, 'Don't make the mistakes that I made.'"

That's tough to do in a town like Reading, where so much pride is tied up in the past. Nottage says whenever she met someone in Reading, she always asked them: How would you describe your city?

"People always said 'Reading was ...' and no one ever spoke of their city in present tense — they always spoke of it in past tense," Nottage says. "And that really broke my heart. ... When I pushed them further people spoke a great deal about feeling invisible: We feel as though our city government doesn't see us. We feel as though the rest of the country doesn't see it."

Nottage says she expected her research in Reading would result in a play about "the resilience of working people." Sweat is not that. Rather, it's a gripping narrative about how people adapt to change — or don't.