Accessibility links
'Black Wings' Is A Devilish Trip Worth Taking Elliott Chaze's classic 1953 noir about an escaped prisoner, a secretive blonde and one last big heist has just been reissued. Critic Michael Schaub says Chaze's writing stands out from the pulp pack.

'Black Wings' Is A Devilish Trip Worth Taking

'Black Wings' Is A Devilish Trip Worth Taking 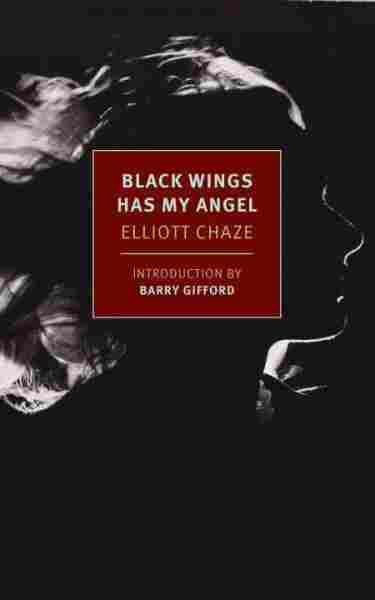 Black Wings Has My Angel

by Elliott Chaze and Barry Gifford

"Twenty-seven may be too young to die," muses Tim Sunblade, the narrator of Elliott Chaze's Black Wings Has My Angel. "But it isn't too young to die like a man." Tim has death on his mind frequently — he's an escaped prisoner determined to do whatever it takes to stay out of jail. He'll kill if he has to, and he'd much rather wind up in a coffin than in a prison cell. This, of course, makes him very, very dangerous.

Tim, as terrifying as he is fascinating, is the unforgettable antihero at the center of Black Wings Has My Angel. Originally published in 1953 by Gold Medal Books — known for their original crime fiction paperbacks with memorably lurid covers — Chaze's novel has been reprinted by New York Review Books Classics, allowing a new generation of readers to discover this underappreciated hard-boiled masterpiece.

The novel opens with Tim relaxing in a hotel room, having just completed a stint as a roughneck on a drilling rig on the Atchafalaya River in Louisiana. He's asked the bellhop to locate him some female companionship for the night, and he's pleasantly surprised when the porter shows up with beautiful Virginia, a blonde with lavender eyes and a sassy attitude.

"God only knew why she bothered to hang around a little fishing village on the Atchafayala when she could be in New Orleans or Memphis or anywhere," thinks Tim, "what with her legs and manners and all." (It just wouldn't be a noir novel without a description of a gorgeous woman's legs.)

Tim and Virginia decide to ditch the small town and go west. It turns out the two have a lot of common, include a love of money. "There's no bad money," Virginia tells Tim. "But, darling, you've got to have drifts of it, lumps of it, and little piles of it only make you sick and petty." Tim has money on his mind, too — he's planning to execute a daring heist, and he doesn't want Virginia in his way. "But I still planned to leave her in the ladies john of some filling station," he explains. "Because you can't kiss your way out of prison and I knew that for sure. For dead sure."

Chaze's gift with words, combined with a plot that moves quickly toward its brutal, startling conclusion, makes 'Black Wings Has My Angel' a trip worth taking for anybody with a taste for the darker side of crime fiction.

But he just can't quit Virginia, and he needs a partner for his heist. So the two make their way to Colorado, first camping by an abandoned mineshaft, then pretending to be a married couple in suburban Denver while Tim plans his ambitious theft. And that's when the fun — so to speak — begins. It doesn't take too long for things to go south and the blood to start spilling. Black Wings Has My Angel is sometimes shockingly violent; there's one torture scene that's almost unbearable to read. Chaze never romanticizes the violence per se, but he doesn't shy away from intensely graphic descriptions.

The novel features everything we've come to love about noir crime fiction. The dialogue is crackling, stylized and often funny. Here's Tim on Virginia: "She was a lousy little tramp. God knows I'm an authority on tramps." And Virginia to Tim: "You move around like a damned tormented tomcat and your eyes aren't right. You're just about perfect. And you're just about horrible."

Chaze's characters are more memorable than you often find in hard-boiled fiction. Tim isn't cartoonishly evil, exactly, though no one would mistake him for good — he's haunted by a man he stabs to death, and he sometimes shows pangs of conscience. Virginia, who's been keeping a secret of her own, is a wild card, unpredictable and impulsive. (This is a pulp fiction novel from 1953, so you can expect some, uh, slightly outdated views on gender equality.)

What makes Black Wings Has My Angel truly great is Chaze's writing, which is simple but elegant. "When a rich man dies it is more complex than when a poor man dies," Tim explains at one point. "A rich man doesn't simply quit living. He quits being rich, too. Of course a poor man quits being poor when he dies, but that is not a thing to lament." Chaze's gift with words, combined with a plot that moves quickly toward its brutal, startling conclusion, makes Black Wings Has My Angel a trip worth taking for anybody with a taste for the darker side of crime fiction.