Accessibility links
How Sarah Palin Paved The Way For Donald Trump Trump's rise can be seen as a natural extension of the kind of politics that Palin embraced after her unsuccessful run for vice president. She endorsed him in the Republican primary this week. 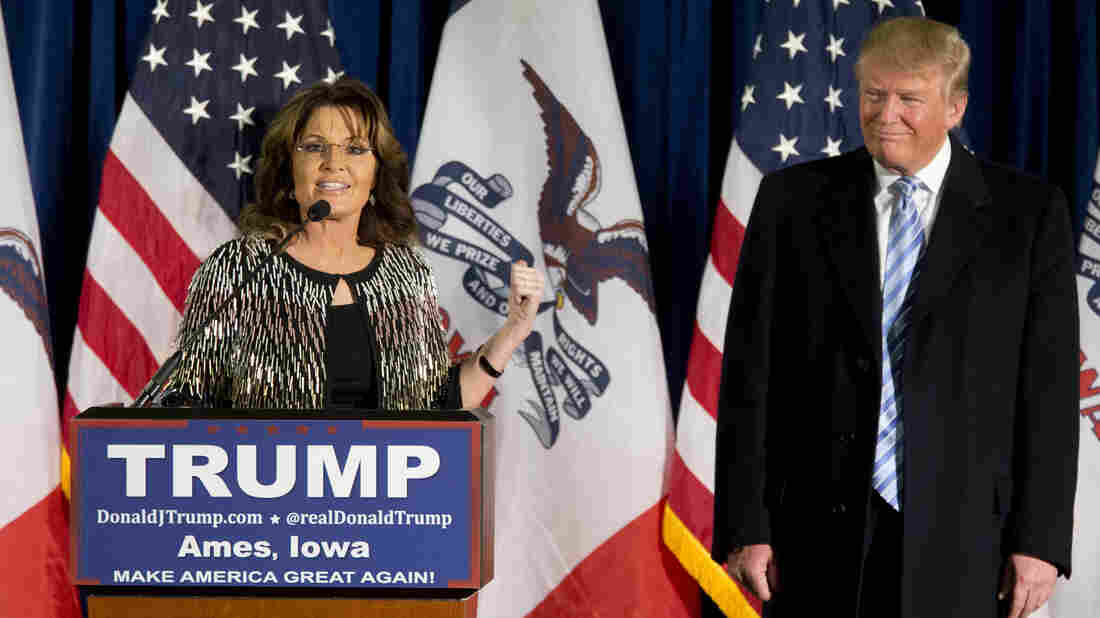 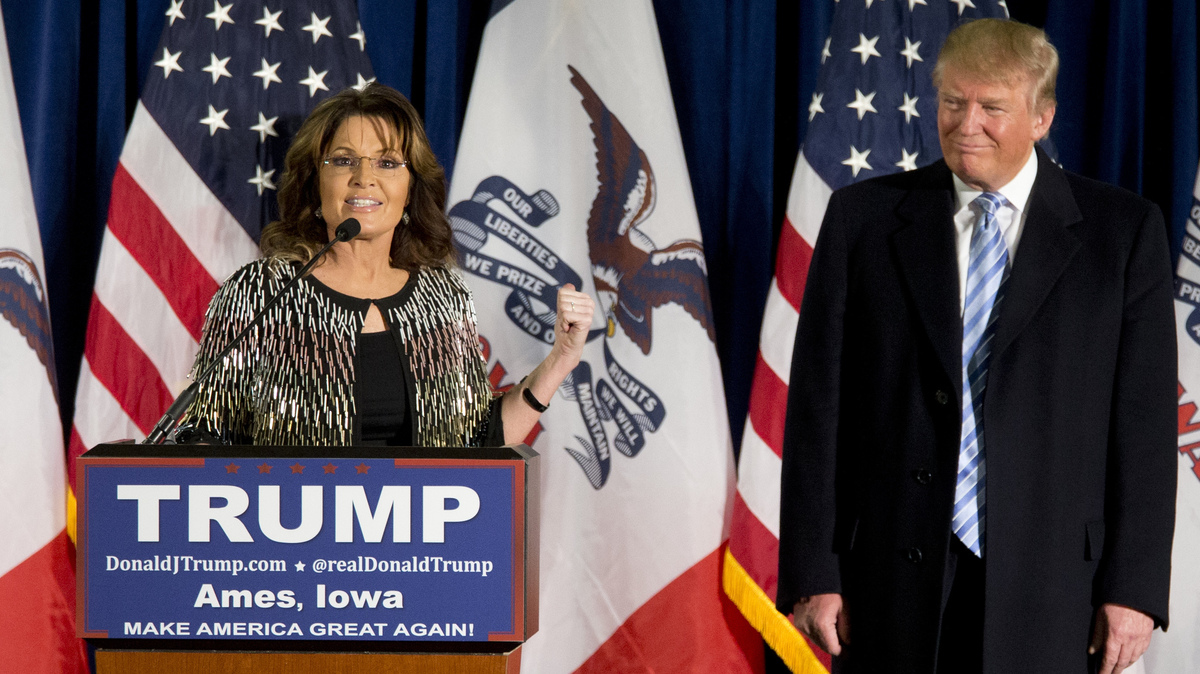 When Sarah Palin endorsed Donald Trump for president this week, it was a surprise move, but one that seemed perfectly logical.

In fact, Donald Trump's rise can be seen as a natural extension of the kind of politics that Palin herself embraced after her unsuccessful run for vice president — combining populism, rage and celebrity.

Eight years ago, Sarah Palin was still unknown to the vast majority of Americans outside of her home state. But when Republican presidential nominee John McCain plucked the Alaska governor from obscurity to be his running mate in 2008, a force of nature in Republican politics was unleashed.

From her very first moments on the national stage, it was clear that Sarah Palin was not your typical politician. Despite a relative lack of experience, she delivered a blockbuster performance in her acceptance speech at the Republican National Convention in September of 2008.

The most famous line from Sarah Palin's speech at the 2008 Republican National Convention.

Some of her best lines were ad-libbed, including her shoutout to hockey moms like herself all across the country.

"I love those hockey moms," she said. "You know they say the difference between a hockey mom and a pit bull? Lipstick." Even her detractors had to admit is was a great moment.

A conservative superstar was born.

The final months of the presidential campaign that year would provide glimpses of the vice presidential candidate's future as a political rabble-rouser who wouldn't shy away from controversy or hardball rhetoric.

She keyed in on Barack Obama's association with Chicago college professor William Ayers, who was a founder of the radical organization the Weather Underground in the 1960s. The group carried out bombings of government buildings as protests against the Vietnam War, which they say were targeted to avoid injury.

On the stump in 2008, Palin said, "Our opponent is someone who sees America, it seems, as being so imperfect that he's palling around with terrorists who would target their own country."

Obama handily defeated the McCain-Palin ticket, but in many ways that gave birth to the Tea Party. And Palin was exactly what the movement needed.

She was the keynote speaker at a National Tea Party Convention in Nashville, Tenn., in early 2010, urging attendees to shake things up.

"The Tea Party is not a top-down operation," she told the crowd. "It's a ground-up call to action that is forcing both parties to change the way they're doing business, and that's beautiful." She was greeted with cheers and chants of "Run Sarah, Run."

Activist William Temple was certainly enamored. "She's the strongest man in the Republican Party," he told NPR that day. "If I can get close enough, I'll give her a kiss."

Meanwhile, Donald Trump watched Palin's rise as she channeled — and fueled — the anger felt by many voters toward Washington. Many of these voters described President Obama as a socialist, a Muslim or not American.

On that last point, Trump was relentless. He repeatedly doubted that Obama was born in the U.S. He questioned documents showing that the president was born in Honolulu, Hawaii.

Trump asserted in a 2011 interview with NBC that Obama "doesn't have a birth certificate or he hasn't shown it. He has what's called a certificate of live birth," and for Trump that wasn't proof enough.

As Trump promoted the so-called "birther" movement, Palin cheered him on, telling Greta Van Susteren on Fox News, "I respect what he's doing in putting his money where his mouth is. He's actually investigating his speculation there on Obama's birth certificate."

Donald Trump posted this video message following his 2011 meeting with Sarah Palin at a New York pizzeria. Trump addressed his use of a knife and fork to eat pizza.

But Palin saw an opportunity for Trump to do more. She urged him to speak out on other topics.

"Right now he's got the spotlight, he's got the megaphone. Now is his opportunity to really force a shift in debate and discussion in this country," she said in that 2010 Fox News interview.

In 2011, Trump and Palin had a very high profile meeting in New York City, creating quite a stir at a time when the 2012 presidential race was just taking shape, and a bus tour that the former Alaska governor was taking along the East Coast raised questioned about her intentions.

They shared lunch — New York-style pizza. Talking to reporters afterward, Trump was asked if he thought Palin should run. He said, "I'd love her to run."

Palin, meanwhile, was asked what she and Trump have in common. She replied, "A love for this country and a desire to see this economy get back on track."

Hearing Palin's speeches over the years and listening to Trump on the campaign trail now, you have two people speaking to the same audience, while hitting the same notes: Obamacare, radical Islamic terrorism, Obama's weak foreign policy, his poor treatment of veterans and, of course, immigration.

Trump shouts at rallies that he'll "bomb the s*** out of ISIS," or that Mexico is sending "rapists" across the border, or that Muslims should be barred from entering the U.S.

And both love to attack what Palin has labeled "the lame-stream media." At his campaign events, Trump points to the press section and calls reporters "dishonest" and "treacherous."

When Palin endorsed Trump in Ames, Iowa, this week and once again grabbed the national spotlight, she gleefully opened her remarks by saying, "Mr. Trump, you're right. Look, back there in the press box. Heads are spinning. Media heads are spinning. This is going to be so much fun!"

The endorsement seemed to come out of nowhere, but on so many levels it also seemed to make so much sense.