Accessibility links
'The Road To Little Dribbling' Is A (Mostly) Pleasant Journey Bill Bryson follows up his classic travelogue Notes From A Small Island 20 years later — older, grayer, and definitely crankier. It's a charming trip, though marred by a little too much grumpiness.

'The Road To Little Dribbling' Is A (Mostly) Pleasant Journey

'The Road To Little Dribbling' Is A (Mostly) Pleasant Journey 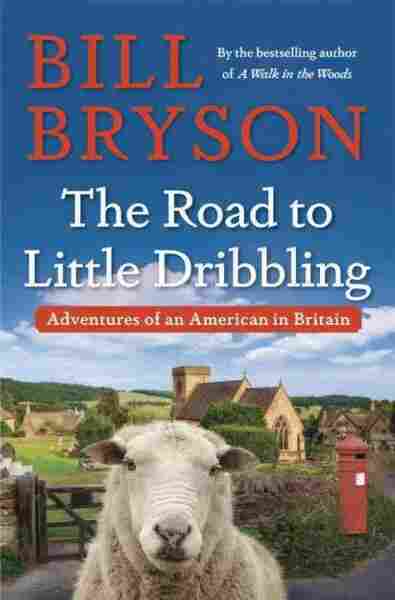 The Road to Little Dribbling

Adventures of an American in Britain

You arrive in England confident. Why shouldn't you be? You speak the language, you've seen Downton Abbey, and as a teenager you nurtured an inexplicable but ardent crush on Tony Blair. It will be like America, but quainter.

It's only after a few months that the strangeness begins to sink in. The way you prepare your tea, it turns out, indicates your exact level of class and education. You discover that Britons think America is a kind of large food court in a mall where everyone possesses heavy artillery and an undying interest in the doings of the royal family. You find that you have been speaking, for months, unacceptably loudly.

Bill Bryson has been chronicling these transatlantic frictions with great wit and flair for decades: In 1995, his Notes From A Small Island explored odd English place names (Chew Magna, Nether Wallop, Helions Bumpstead), the intricacies of aristocratic titles, the wild loveliness of the countryside and the strange English compulsion to put jam on cake. In his sequel, The Road To Little Dribbling, Bryson — who's American — takes a bounding route through the island nation with the encomiastic zest of a tour guide and the gentle classism of a real Englishman.

Britain, Bryson writes, may be "a rainy island adrift on a cold gray sea," but it has "the most superlatively park-like landscapes, the most orderly cities, the handsomest provincial towns, the jauntiest seaside resorts, the stateliest homes, the most dreamily-spired, cathedral-rich, castle-strewn, abbey-bedecked, folly-scattered, green-wooded, winding-laned, sheep-dotted, plumply-hedgerowed, well-tended, sublimely decorated 50,318 square miles the world has ever known."

At its best, The Road To Little Dribbling is a funny and pleasant travelogue. Bryson can capture a place memorably with just a sharp phrase or two, and he is full of the gentle and reassuring variety of humor often deployed by uncles: "Cornwall ... isn't a county at all but a duchy — a distinction the Cornish are very sensitive about. (You could say that it is a touchy duchy.)"

At its best, 'The Road to Little Dribbling' is a funny and pleasant travelogue ... At its worst, it's a long and grumpy Yelp review

At its worst, it's a long and grumpy Yelp review — Bryson may describe the countryside with rapture, but he devotes almost equal time to railing against the incompetencies of various service workers, the ignominies of the Internet age, the traffic, the placement of garbage cans, the scarcity of garbage cans and the misuse of garbage cans.

At one point he pauses in the middle of a rant about celebrity culture ("I hate to sound like an old man, but why are these people famous?") to address the subject of young men with baggy pants and oversize hats: "If you took all the young men in Southern England with those caps and that slouch and collected them all together in one room, you still wouldn't have enough IQ points to make a halfwit."

Little Dribbling's central thesis is this: "In countless small ways the world around us grows gradually [lousier]." If you happen to agree with this glum assessment, you will not find a more wry and winning champion.

At Bryson's House, 'Home' Is Where The History Is

And, to be fair, Bryson's grumpiness is self-aware and self-critical: He shouts at a Marks & Spencer employee who can't tell him where the food hall is, only to discover he is in H&M. Wandering around Dartmouth with a bunch of other people "of about my age and socioeconomic background," he notes: "This, I realized, is my future: a dotage spent mooching around places like Dartmouth, visiting shops and tearooms, and bitching about crowds and costly, inconvenient park-and-ride schemes."

Self-awareness should not absolve him, however. The grumpiness is endearing to a point — yes, traffic is annoying — but it just isn't pleasant to read about someone being mean to a hapless McDonald's server, however charmingly self-deprecating Bryson is in describing it.

On a road trip, Bryson is pleased to find no one cuts him in traffic. It is, he writes, "like the England that used to exist everywhere, in which you considered the needs of others along with your own on the assumption that they would do likewise with you." That fictional former England — all rose gardens and tea with Mr. Tumnus — sounds nice and all, but I prefer the new England, the one that's given up its colonies and started letting women into universities.

Bryson's not always a cheerful travel companion, and he'd probably be embarrassing to take places (you really can't refer to Caitlyn Jenner as "Bruce Jenner in drag") but all the complaints about tourists and litter do make a serious point about the conservation of this lovely little island. The British countryside is "the world's ... most perfect accidental garden," he says. "All Britain has to do now is look after it."

Even if euthanasia for litterers, as he suggests, might be a bit much.