Accessibility links
Chicago Teens And Combat Veterans Join Forces To Process Trauma In parts of Chicago, violence is unavoidable, with effects similar to being in a war zone. The Urban Warriors program connects kids with veterans who may understand what they've been through. 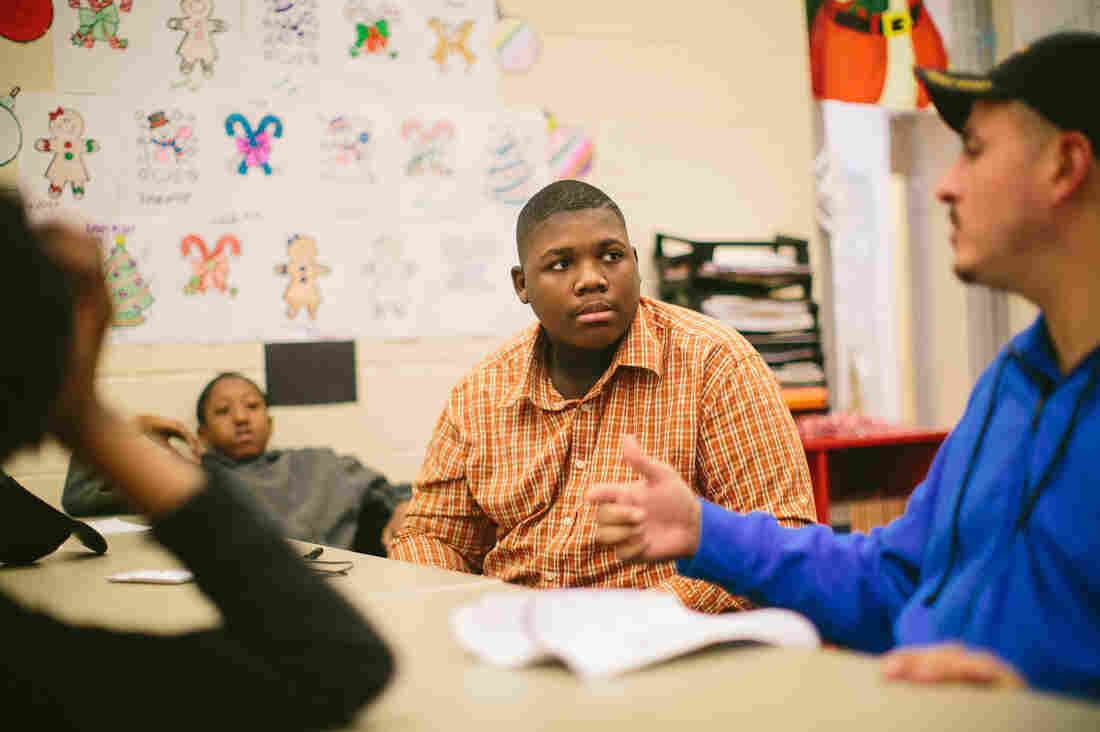 Jim Courtney-Clarks, 15, talks with Army veteran Alberto Bóleros during the Urban Warriors program in December. The Chicago program is designed to bring together veterans and youth who have been exposed to the city's violence. Alyssa Schukar for NPR hide caption

If you took a map of Chicago and put down a tack for each person shot last year, you'd need nearly 3,000 tacks.

Of those, 101 would be clustered in the neighborhood of East Garfield Park. That's where 15-year-old Jim Courtney-Clarks lives.

"To be honest, I really don't like it," Courtney-Clarks says. "Every time you look up somebody else is getting killed, and I never know if it's me or somebody I am really close to."

For kids in some Chicago neighborhoods, walking up and down the same street where there was a beating or a shooting or a body is just part of life — one that isn't always talked about.

That's something the Urban Warriors program is trying to change. The YMCA of Metro Chicago project connects kids like Courtney-Clarks, who live in high-violence neighborhoods, with veterans who have served in Iraq or Afghanistan and who might understand what they're going through.

The program is built on the idea that these kids are experiencing trauma and need to process it, and that witnessing or experiencing violence can affect how they behave at home, react at school, or lead them to commit violence themselves. 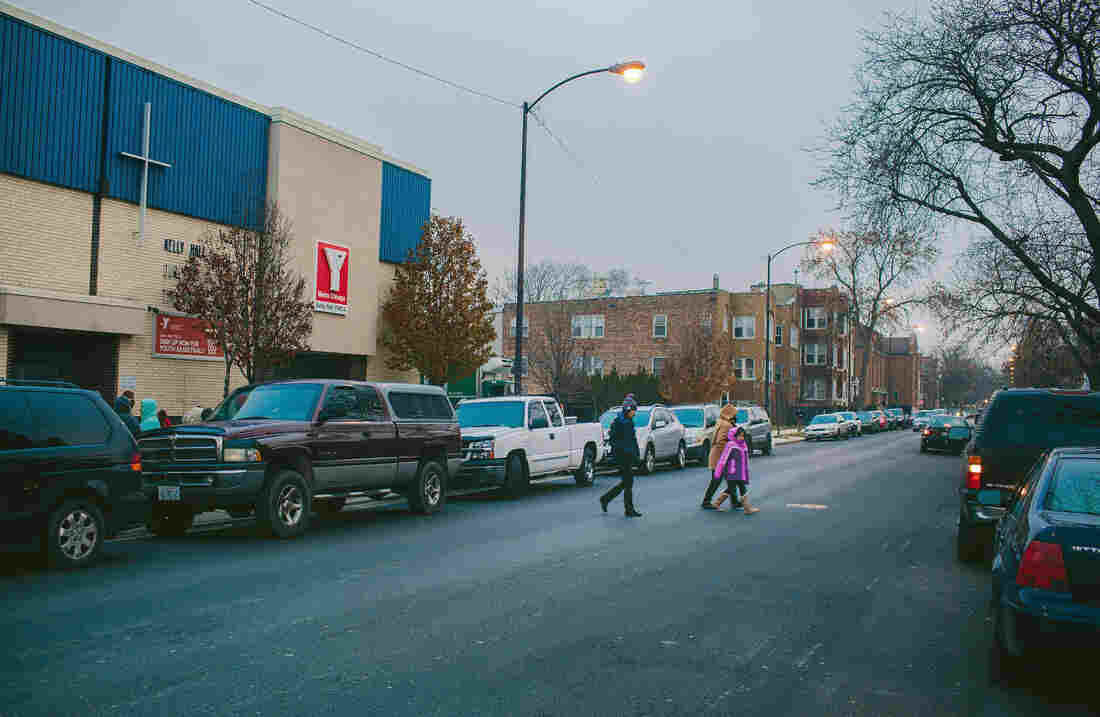 The man behind the program is Eddie Bocanegra. Today he's the co-executive director of youth safety and violence prevention programs at the YMCA. But 20 years ago, he was a 19-year-old gang member serving prison time on felony murder charges.

Bocanegra traces the idea for Urban Warriors back to a conversation he had while he was in prison. It was during a visit from his brother, Gabriel Bocanegra, a decorated Army veteran who had done two tours of duty in Iraq.

Fresh from therapy, Gabriel told his brother stories about struggling with post-traumatic stress disorder — and how he thought Eddie was also dealing with the effects of trauma.

Eddie was skeptical, but his brother pressed him, recalling the violence of their childhood — black eyes, stab wounds, run-ins with the police. The trauma was ongoing, his brother said.

"'Every time that I come and visit you, what you talk to me about is prison assaults, you talk about people who commit suicide. ... You talk about it as if it was just normal,'" Eddie remembers his brother telling him. "And he was explaining to me, 'Like, Eddie, actually this does something to you. And the reason why you're pretty upset most of the time, or you're not sleeping well, is because of what you've been through.'"

Eddie says he was in denial. "I have never been to war," he thought. "This is normal, this is nothing, compared to what I know (my brother has) gone through." 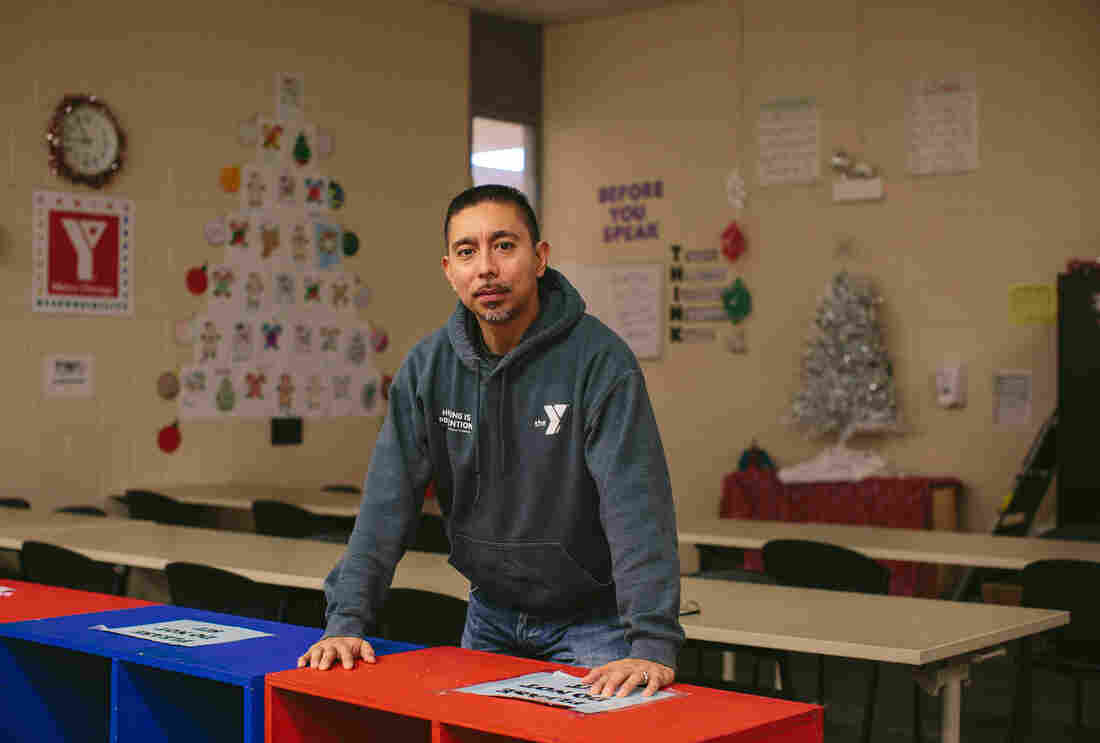 After serving 14 years for a gang-related murder, Eddie Bocanegra graduated from the University of Chicago and created the Urban Warriors program. He is co-executive director of youth safety and violence prevention at the YMCA in Chicago. Alyssa Schukar for NPR hide caption

His brother urged Eddie to see a therapist when he got out of prison. When he was released, he did eventually. He also returned to the Chicago neighborhoods where he was once a gang member and worked for an anti-violence program.

Many of the gang members Bocanegra met had witnessed violence or been victims as kids. He wanted to get to them sooner, using people they respect as mentors. He gave the kids a list of potential role models from the neighborhood; they liked the idea of veterans.

"Kids identify themselves as soldiers, because they live in war zone communities," Bocanegra says. "They make the parallels between, veterans, you know, carry guns, we carry guns. They got ranks, we got ranks. They got their Army uniforms, we got our gang colors. And the list went on and on."

For the past two years, he has put this idea into practice with the Urban Warriors program.

On a Saturday morning late last year at Chicago's Kelly Hall YMCA, seven veterans — a mix of black, white and Latino men, some of whom grew up in the same neighborhoods as the teens — sit in a circle. The dozen or so boys shuffle in one by one. Some are cheerful, some sullen with sweatshirt hoods and baseball caps pulled low. They grab granola bars and take a seat.

Mikhail Dasovich is a 25-year-old Marine Corps veteran helping to lead the session. He joined Urban Warriors after seeing a flier about the program at his therapist's office where he was getting help for PTSD. 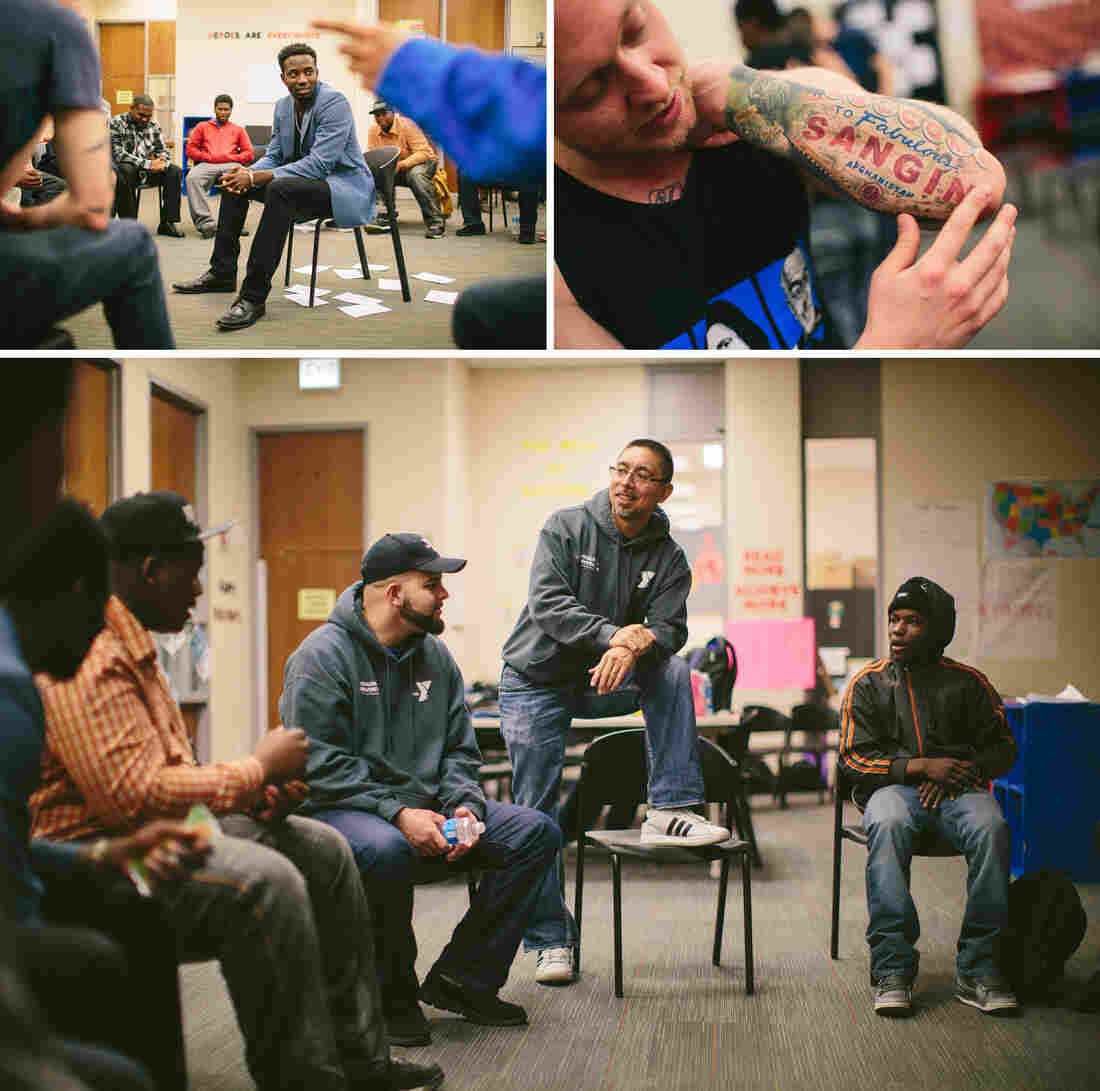 (Top, left) In an exercise designed to open up the conversation between veterans and teenagers, Navy veteran Jamal McPherson waits for others to ask him questions. (Top, right) Veteran Mikhail Dasovich, who served as a Marine in Sangin in Afghanistan, shares his tattoos with participants. (Bottom) Bocanegra speaks at the start of the day's program. Alyssa Schukar for NPR hide caption 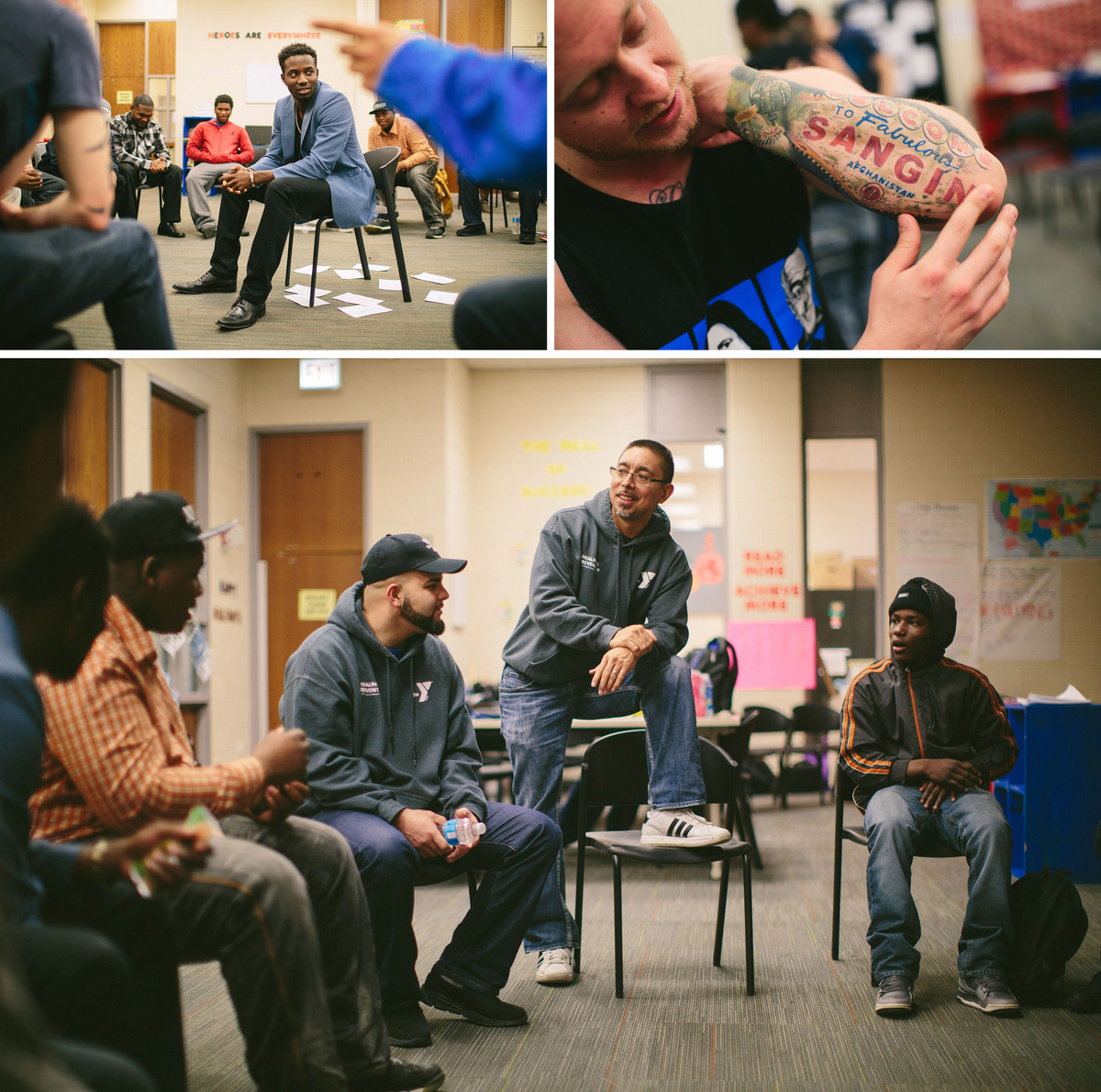 (Top, left) In an exercise designed to open up the conversation between veterans and teenagers, Navy veteran Jamal McPherson waits for others to ask him questions. (Top, right) Veteran Mikhail Dasovich, who served as a Marine in Sangin in Afghanistan, shares his tattoos with participants. (Bottom) Bocanegra speaks at the start of the day's program.

"I was very, very nervous, and all of the youth were looking at me. And everyone's clowning, everyone's joking," he says. "And one of the youth ... he says to me like, 'Hey, you ever seen someone get shot in front of you?' And the whole room went silent, and I was like 'Oh man, like, this quick, huh?'"

Dasovich told the group about watching his platoon sergeant get shot, right in front of him, during the war.

"I went into detail, what seeing my father figure getting tore up by rifle bullets, what that did to me emotionally," Dasovich says.

Immediately, the teen who asked the question then offered up his story.

"Right from my answer [he] goes in to describe how he had to watch his two cousins get gunned down right in front of him." Dasovich says. "And that was something I had never felt before, to have such a young man so effortlessly describe the execution of his family members."

"These kids, before they're 16, have, in essence, really been to combat," he says.

Dasovich says he sees the effects of neighborhood violence on some of the teenagers and recognizes some of the same habits he picked up serving in combat.

"I see the same levels of self-awareness with these kids when we're outside, just seeing how they're looking around," he says. "It piques up right in me, remembering just having to check my sectors, always feeling like I had to check my back when I came home from the war."

Being alert is just a way of life for most of these boys. Fifteen-year-old Noel Melecio brings up a few recent attacks in his neighborhood, Logan Square. He says he thinks the same thing almost happened to him.

"Me and my friend were walking, and I look back and I see there's one group of kids behind me, which is like two or three kids and then across the street I see another group of kids," he says. "I think they're trying to wrap around so they can get in front of us, so I tell my friend, 'Start running.' And we start running and they start chasing us."

Melecio got away, and later shared the story with the vets and kids in the group.

For Urban Warriors that's the idea: The teens talk about what they're going through, the veterans help them figure out how to process it.

But getting them to open up takes time. Over the program's 16 weeks, the veterans build trust through team building, talking and sometimes just playing.

At the recent Saturday session, that included a rowdy race through a makeshift obstacle course of folding chairs and lunch tables. The catch: a blindfolded member on each team and a military-like mandate that no one is left behind. 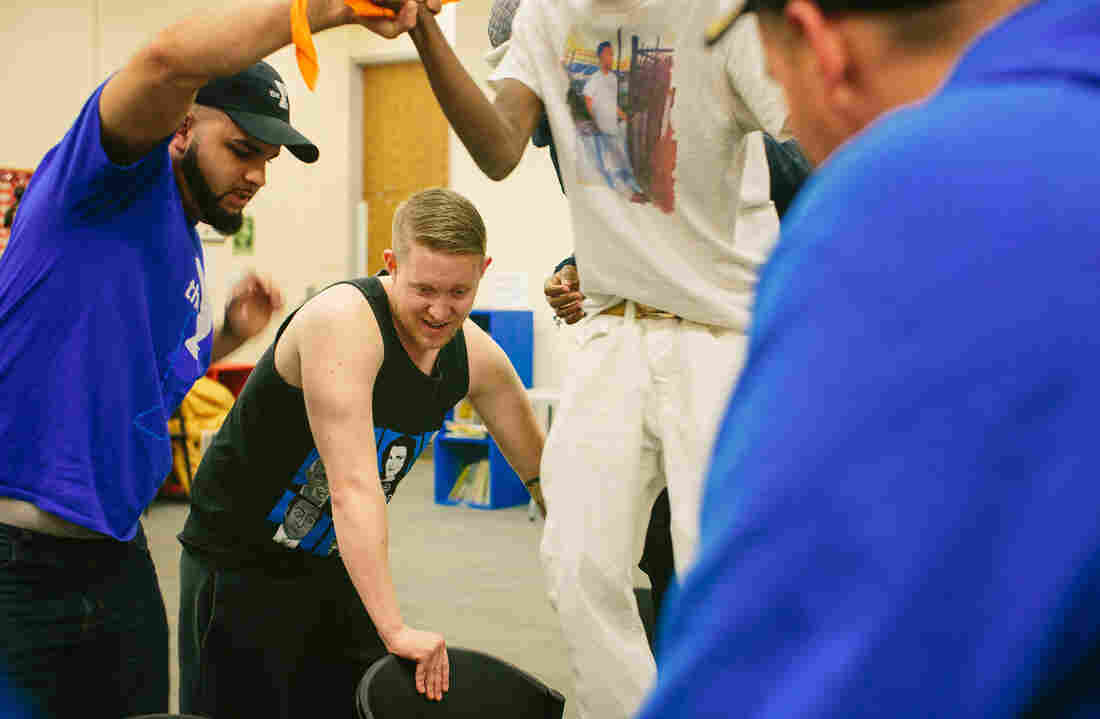 Eventually they break into small groups — three or four kids for each veteran. And that's where they get at the most difficult subjects: suicide, loss, grief. They might have endured the deaths of family or friends, witnessed assaults or other violence.

Melecio says it wasn't easy for him to share at first.

"It was like, all we do is just come here and sit here and just talk about feelings," he says. "I can do that anywhere else."

The program is voluntary and some kids do drop out. Melecio says the veterans are what got him to stay.

"Anywhere else anybody would just tell you, 'Oh, you'll be OK,' or they'll pat you on the back or something. But them, they like get into your feelings and help you sort them out," he says.

But just sticking it out isn't a measure of success. In fact, people around the country are weighing this idea — that neighborhood violence can cause trauma that should be treated. 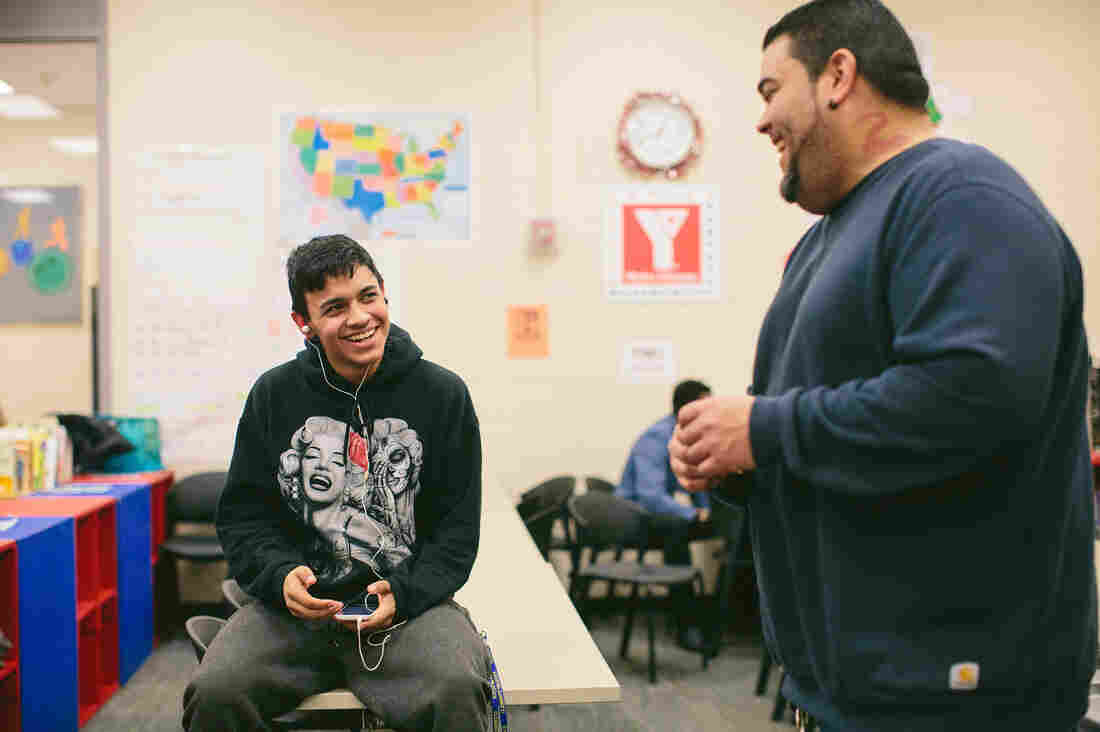 In California, a handful of families sued the Compton school district arguing that trauma is a disability that schools should accommodate. Baltimore is putting workers, citywide, through training to detect and understand trauma in the communities they serve.

The Urban Warriors program raises many questions: How do you know if a kid is coping better? What about the vets? Does mentoring help them deal with PTSD? Researchers from the University of Chicago have begun studying the kids who have completed the program — currently about 80 — in order to start answering those questions.

In the meantime, Jim Courtney-Clarks, the teenager wondering whether he'd be the next shooting victim in his neighborhood, is unequivocal. He says Urban Warriors has changed the way he thinks about his future.

"The past week, I was just thinking about dropping out of school," he says. "Until today. And I see that it's a lot of stuff that I can accomplish if I stay in school, by looking at the veterans. Like I'm not sure if I want to go to college, but I might want to join the police academy or just go to the Navy or something."

For Courtney-Clarks and the veterans of Urban Warriors, that's a start.