Accessibility links
A Conversation With The Creator Of #OscarsSoWhite The hashtag resurfaced this year as a protest against the lack of diversity among Oscar nominees. The woman who started it, April Reign, explains her frustrations — and her hopes for the future. 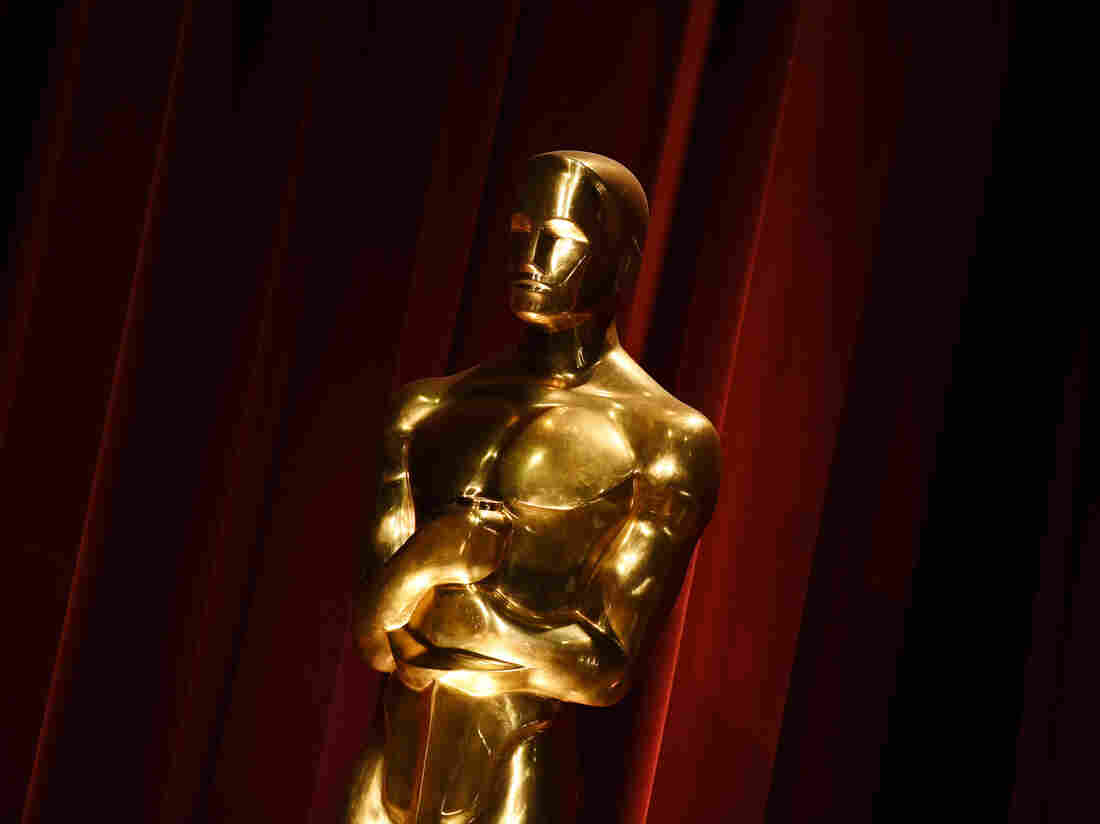 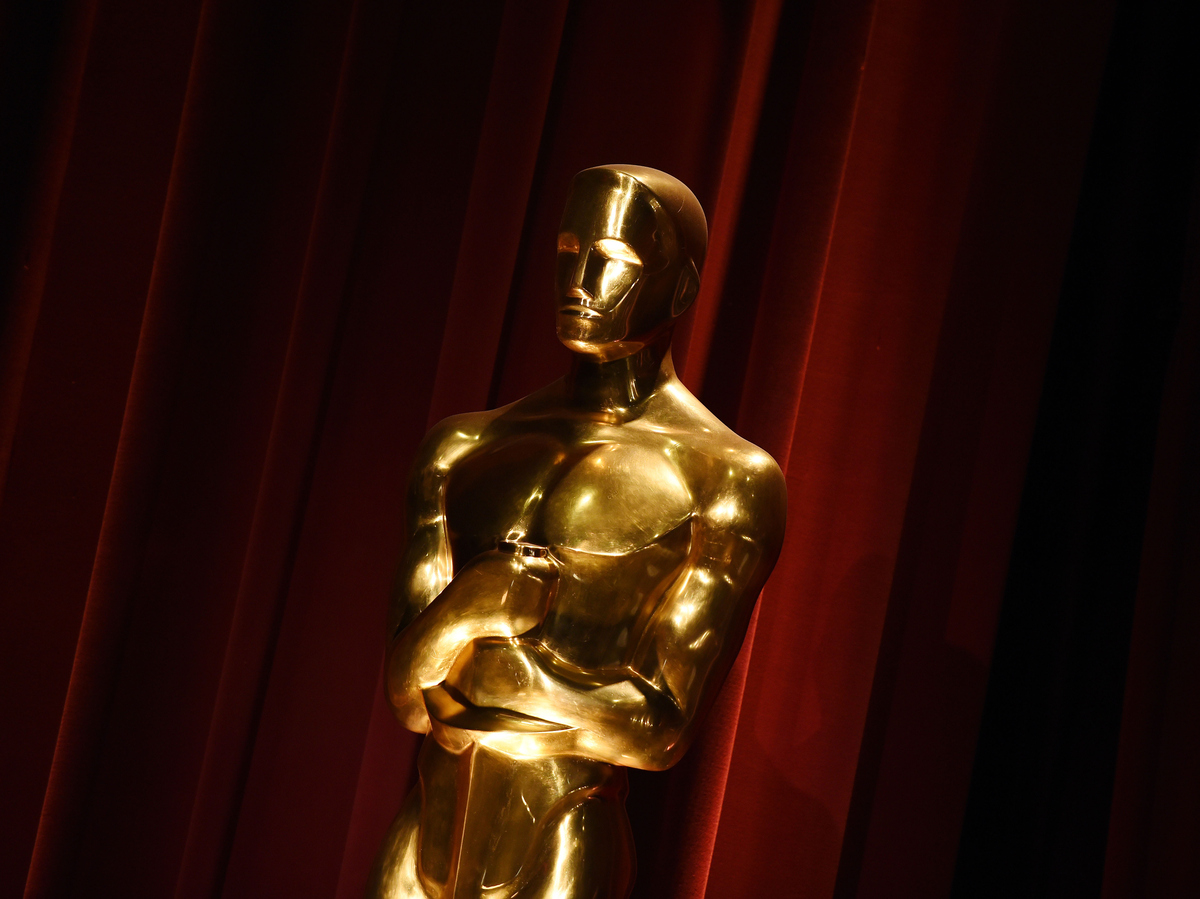 An Oscar statue, on display during the Academy Awards nominations announcement in Beverly Hills, Calif., on Jan. 14.

In recent weeks, as controversy has embroiled the Oscar nominations, one hashtag has surfaced again as a vehicle for those displeased with the lack of diversity among the academy's selections: #OscarsSoWhite.

The hashtag has gathered momentum once more online, even as criticism of the Academy of Motion Picture Arts and Sciences escalated — to the point where, on Friday, the academy announced unprecedented changes to its membership and voting rules. The goal, according to a statement, was to "make the Academy's membership, its governing bodies, and its voting members significantly more diverse."

But #OscarsSoWhite isn't simply a hashtag — it's part of a broader social media movement started in 2015 by April Reign, managing editor of BroadwayBlack.com.

Reign spoke with me about her reaction to the academy's changes and what more still needs to be done to increase diversity in the film industry. The conversation was edited for length and clarity.

What's known as "hashtag activism" has been criticized as not being enough to create change outside of the online space. Did you ever imagine #OscarsSoWhite would become what it is?

There was no way for me to know that a single tweet that I made from my family room in January of 2015 would have the impact that it has. And I'm not sure that anyone ever really knows what hashtag is going to become viral until it does. The very first tweet was "#OscarsSoWhite they asked to touch my hair," and I was just being sort of cheeky and frustrated with what I was watching on the Oscar nominations and it just took off from there.

#OscarsSoWhite they asked to touch my hair. 😒

And so there were a lot of discussions, and we saw last year that Cheryl Boone Issacs, the president of the academy, invited 300 new members to the academy in an attempt to increase its diversity, but then the nominations were announced this year, 2016, and there was no change. In fact, it may have actually gotten worse. And so the hashtag unfortunately was still very relevant and experienced a resurgence. 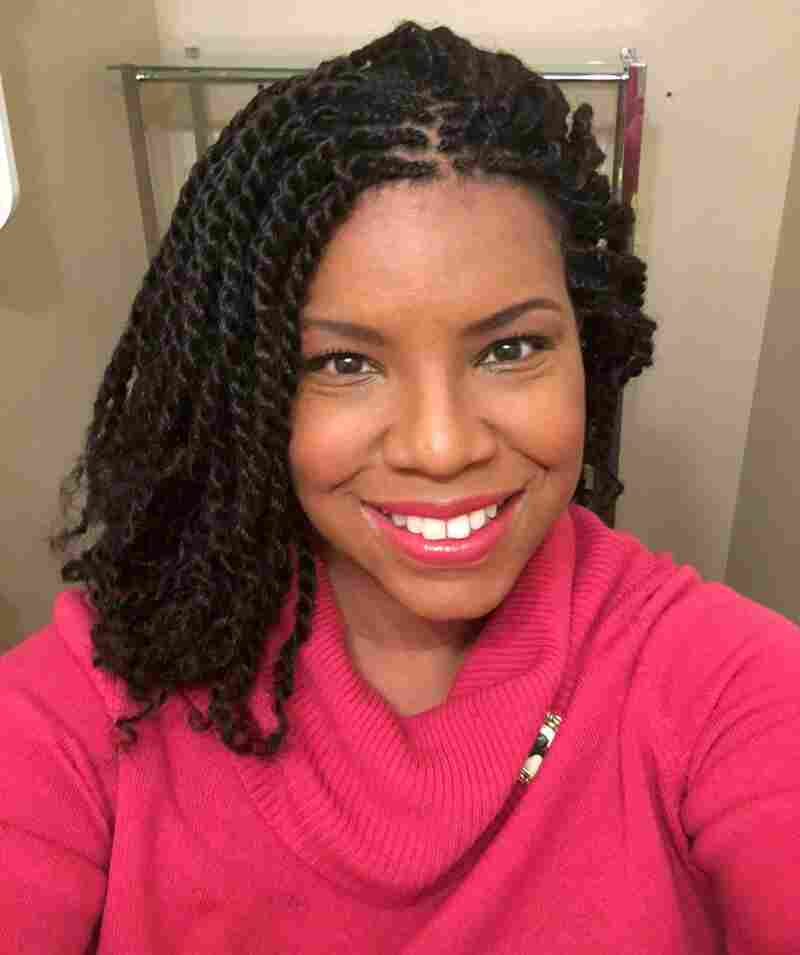 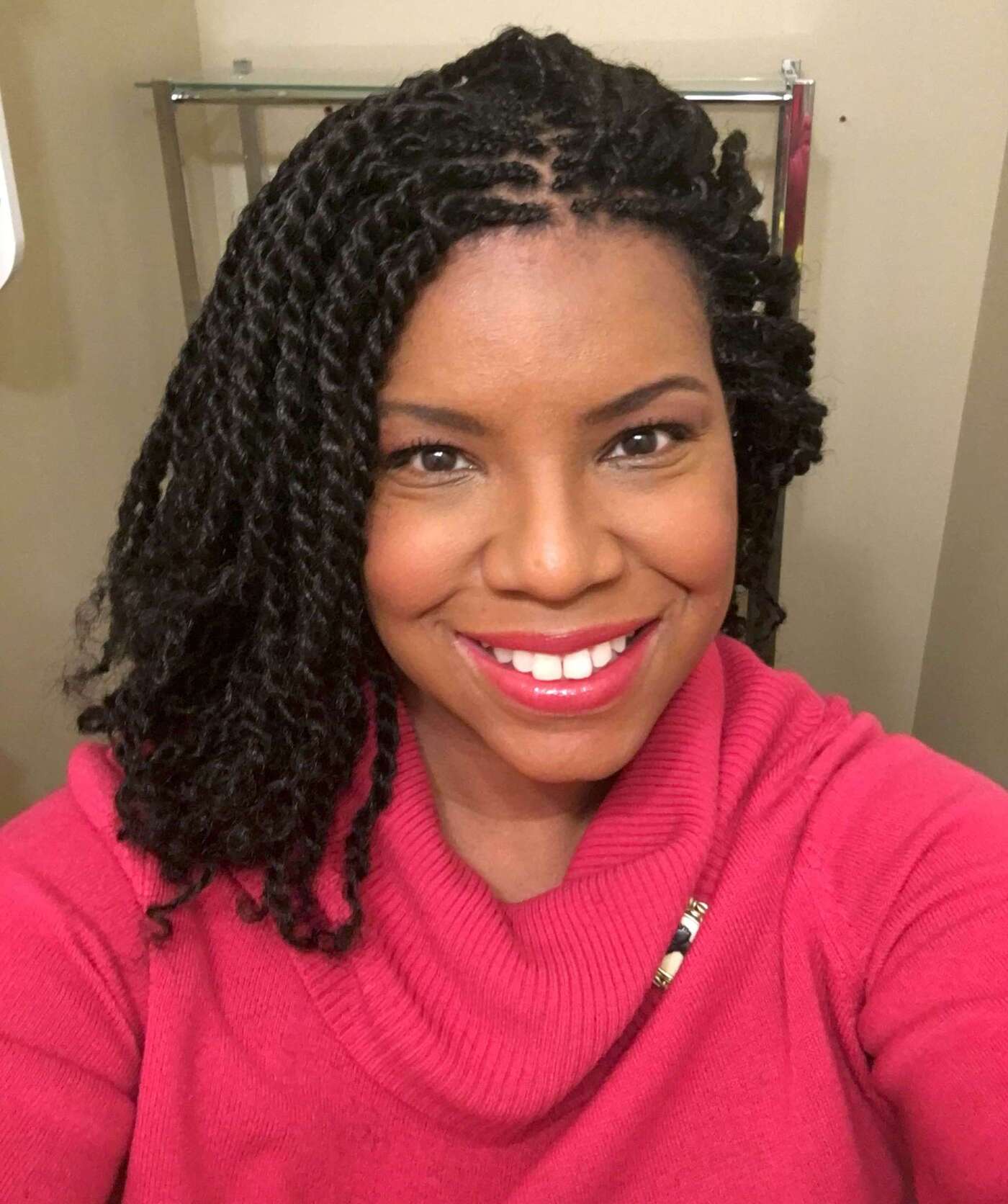 Many creators in the digital space are unable to hold on to ownership of their creations once they go viral. Was that something that worried you at all?

It happened somewhat, and I have to credit other people who are Twitter friends of mine who will take journalists and other organizations to task for saying something like "Twitter created the hashtag" — or something passive like "the hashtag was created by Twitter," or "it just took off" — without saying, well, "Here's the person who actually did it."

There's a real person. It's in my bio. It's not very hard to track down. There were countless articles from last year and this year that named me directly or it's easy enough to figure out who I am. There was also a question about, I'm speaking about the erasure of people of color in marginalized communities in film, and yet I am being erased because they're not actually acknowledging the person who created the hashtag. ...

I appreciated every time someone reached out and said, "Is it you? We want to interview you directly, because you actually started it." But overall, it's not about me. I don't need the credit.

What I want to see acknowledged is a change that everyone, or so many people, were asking for. So, make more diverse films, change the structure of the academy, change the way that votes are cast by academy members. That's what's important when all is said and done. If you remember that I had something to do with that, even better — but it's not imperative.

Was the announcement that the academy made on Friday on par with what you were hoping for? Were they missing anything?

I think it's a really good first step. I am very encouraged by the fact that the vote that the board of governors took was unanimous to make these changes.

Some of the things that they are doing now, I specifically suggested in interviews, so I am gratified that the academy and President Cheryl Boone Isaacs were listening.

Have you heard from Isaacs or anyone on the organization's governing board?

No. I would imagine that if they were going to reach out they would have done if before they decided to make the changes, but again, it's not about me. They were able to make sweeping changes: I mean, to my knowledge, these are the first substantive changes that they've made to the voting structure in the over 80-year history of the academy.

They didn't need to reach out to me. ... I think what they've done will go a long way to increasing the diversity of the academy. I would like to see the academy now put the onus on Hollywood studios to make more diverse and inclusive films, to give the academy something on which they can vote that doesn't look as homogeneous as what we currently have.

On that note, what do you say to people who argue that this energy is being spent on the wrong fight, and that focus should actually be put on encouraging diversity among studio executives, production companies and writers' rooms?

I think that this is an issue that can be addressed on many fronts. There was a need for the academy to be more diverse and for them to represent the people who watch the films that they nominate and that they support.

There's also a need for Hollywood and the studio heads and those who greenlight the films to make substantial changes to their thought processes and perspectives. They need to broaden their perspectives with respect to who can play particular roles and how stories can be told effectively.

I don't know that this is a chicken-and-the-egg issue and that we should have pressured Hollywood before we pressured the academy. I think this is the way that it turned out, I think the changes are a good start, but I think there is more work to be done.

Director Spike Lee and actors Will Smith and Jada Pinkett-Smith have called out the Oscars in recent weeks, saying they won't be attending, which many are calling a boycott. On the other hand, Whoopi Goldberg said on The View that refusing to tune in or not attending is a "slap in the face" to host Chris Rock. What do you make of their stances?

"Boycott" is a word that was sort of thrust into the mix. Spike is saying that he's not actually boycotting, they're just not attending. Jada and Will won't be attending. We engaged in counterprogramming last year. We tweeted Coming to America during the Oscar's presentation and that movie was chosen very deliberately. We will be doing something on an even bigger scale this year. So, if you want to call it a boycott that's fine; that's not really a word I'm comfortable with.

What I'm saying is that if you have issues with the way the academy has been up until yesterday, if you want to see yourself, your perspective or someone else's perspective, something different from the academy, then don't watch on Feb. 28. Turn off your TV, express your concern and your disappointment with your dollars. Not only with your dollars at the movie theater in choosing very thoughtfully which films you will support, but also with your viewership.

I think the changes are a good start, but I think there is more work to be done.

What we know — based in part on the conversations emanating from the #OscarsSoWhite hashtag last year and our live-tweeting during the telecast of something other than the Oscars — [is] that the Oscars show had its lowest ratings of the last six years.

As I say, [what] we'll be doing this year, we're not ready to announce just what yet, but it'll be on an even grander scale because there's still work to be done. I'm very gratified with the announcement that the academy made, because I think the changes they will be making are important. But that doesn't speak to this year. So, we're going to continue with our original plan.

While some actors and filmmakers have come out in support of the call for more diversity, there have also been actors who have faced backlash for their comments about the situation. Actress Charlotte Rampling, who is nominated this year in the best actress category for her role in the film 45 Years, said in an interview on a French radio program that the uproar is "racist against whites." She later released a statement saying she regretted her comments. British actor Michael Caine has also spoken out, saying in an interview with BBC Radio 4 that actors of color should just "be patient." How do you respond to their comments?

I found them very disappointing, because I think that Michael Caine is a fine actor. And to tell people of color they need to be patient when we have been for over 80 years is frustrating. You cannot say that there are not qualified film creatives both in front of and behind the screen — directors and cinematographers and screenwriters, in addition to actors and actresses. I found his comments disappointing, because I think that unfortunately ... he may be expressing what perhaps some of the academy members think, as well. Change is hard, and I would hope that he will see the light and embrace opportunities for everyone, including himself.

You mentioned a "we" when talking about planning for the #OscarsSoWhite counterprogramming during this year's ceremony. Are you talking about your followers or do you have some sort of dedicated team for the logistics?

There's no team; it's just me and people who feel like me. So, it is my followers who retweet what I say, and articles and interviews on the subject. They tell two friends, and they tell two friends, and so on. I definitely could not have done this alone. This happened because there are millions of people around the world who want to see films that are more representative. They spoke out and changed with me, so I am very humbled by the support I've recieved and the support that the hashtag got as well.

I'd like to thank academy President Cheryl Boone Isaacs, because I know that this was not easy for her. She has been speaking out about these issues for a while, and she could not have made these changes alone. The academy is over 6,000 members strong, and she appeared to have been very vigilant in wanting these changes made. Again, while I think there's more that needs to be done, I appreciate her work on this issue, especially in the last couple of months.