Accessibility links
Young Theater Fans Find Their Tribe At The First Ever BroadwayCon For one 14-year-old fan, BroadwayCon was a chance to meet people who understand her theater obsession. "We can share what we love," she says. 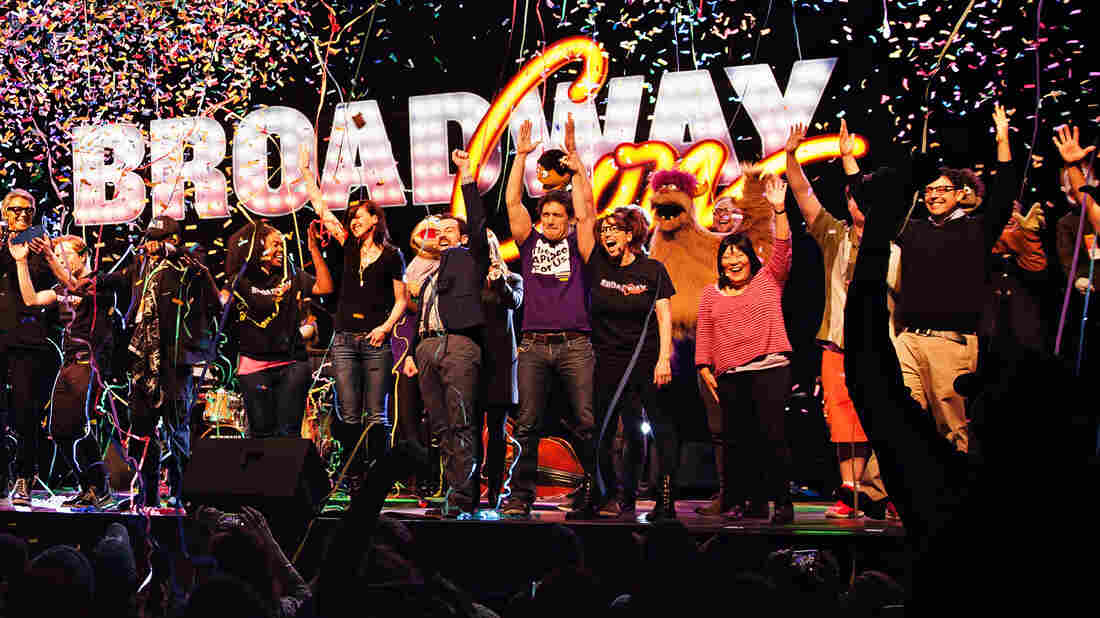 Actors take a bow after performing in BroadwayCon's opening ceremony, which was a kind of mini Broadway musical. Cheri Root/Courtesy of The Honig Company hide caption 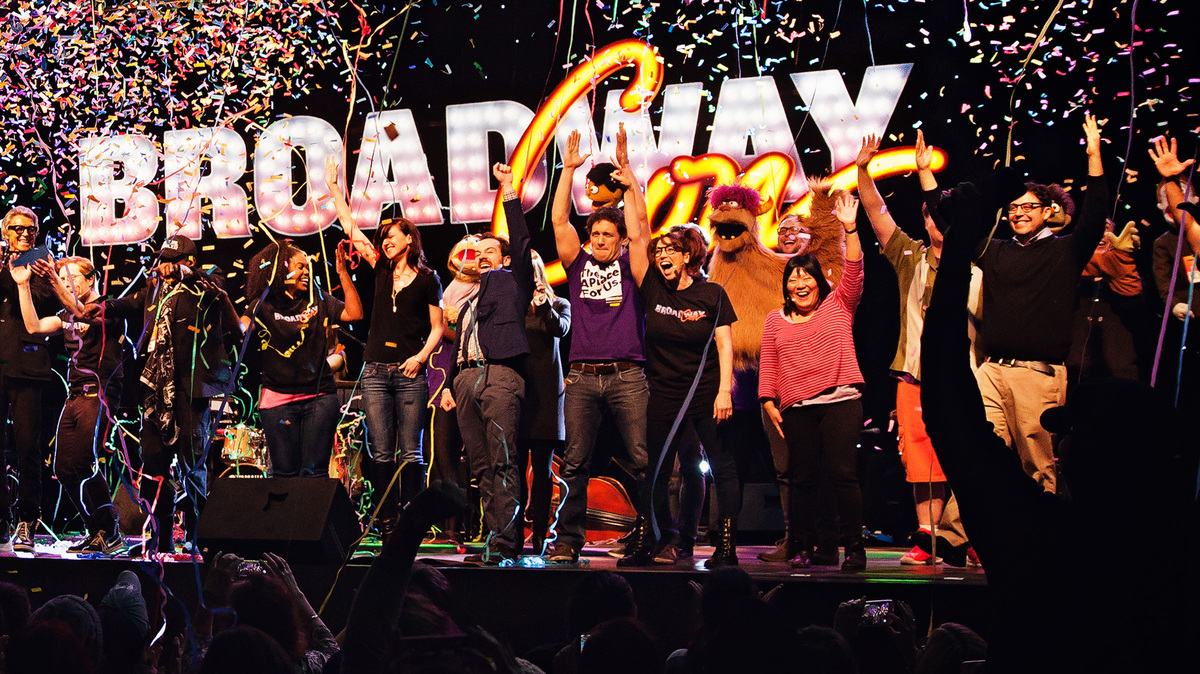 Actors take a bow after performing in BroadwayCon's opening ceremony, which was a kind of mini Broadway musical.

Cheri Root/Courtesy of The Honig Company

I remember being 14 years old and standing out in the cold at the stage door of Pippin, waiting to get actor Ben Vereen's autograph on my Playbill. More than 40 years later, I still have that program, and I thought about it a lot last weekend as I watched crowds of young people — many in elaborate costumes — geeking out over their shared love of theater.

While a blizzard raged outside, about 5,000 hard-core fans packed a hotel in Midtown New York for the first ever BroadwayCon. Like Comic-Con, it was a chance for fans to meet up and an opportunity for the industry to cement its relationship with a younger audience. Many bought a T-shirt that read "There's a place for us." (Ten points if you know which Stephen Sondheim musical that's from.) 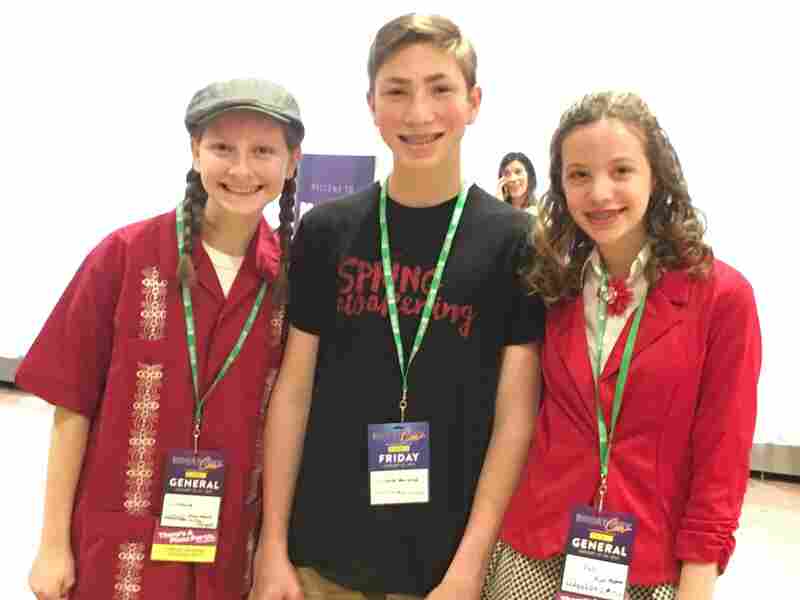 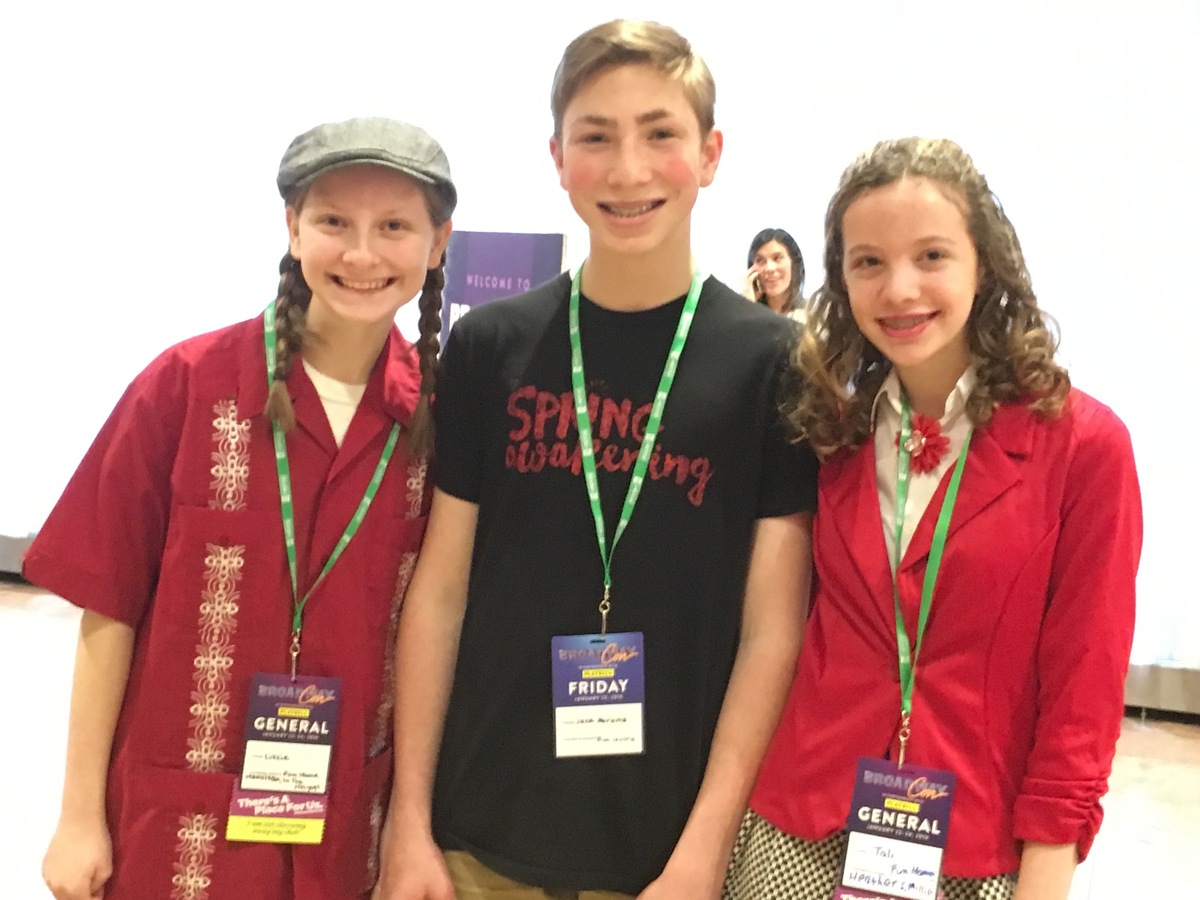 "I think it's a really cool idea to have so many Broadway fans together, and we can share what we love," said Lizzie Mathias, a 14-year-old from Grand Rapids, Mich. Mathias was dressed like her favorite character from In the Heights. She came to BroadwayCon to get together with two friends she met on Instagram: 13-year-old Jack Abrams from Los Angeles and 14-year-old Tali Natter from New York City. I asked Tali what she was hoping to get out of BroadwayCon. "[To] just meet more people like us who understand why we are obsessed," she said. "And meet all the stars and learn more about this thing that we love so much."

Actor Anthony Rapp, one of the original stars of Rent, is co-founder of BroadwayCon. He said, "This is the thing that social media can and should do, I think, is bring people together and not just have them staring at their screens, you know, like a zombie. ... If this can bridge all of those worlds and bring people together and celebrate community, that's exactly what we want to do."

And what brings people together better than sing-alongs? I saw fans singing a tune from the TV show Smash (about the making of a Broadway musical) and two young men with bloody prop razors singing a duet from Sweeney Todd. And then, of course, there are the Hamilfans — hundreds of them — who knew every word of the hit musical Hamilton. That was one of the highlights for Jack.

"We were chosen to sing with all of these other fans up on a stage," he said. "And it was really cool and seeing how so many people do the same thing as us and we're not the only ones."

Jack found his tribe at BroadwayCon — and that may well be a good sign for the future of this living, breathing art form, especially since the average Broadway audience member now is 44 years old. Melissa Anelli, co-founder of the event, broke down the attendance numbers: "We are about 80 percent out of town, close to 80 percent female and half of our attendees were between 18 and 30."

From what I saw, the marketing seemed to have worked on that last demographic. Lizzie loved the event's elaborate opening ceremony, which was kind of a mini Broadway musical. "My favorite part was that they did a parody of the Hamilton song 'The Room Where It Happens' changed to 'The Con Where It Happens,' " she said. " [It] made me so happy!" 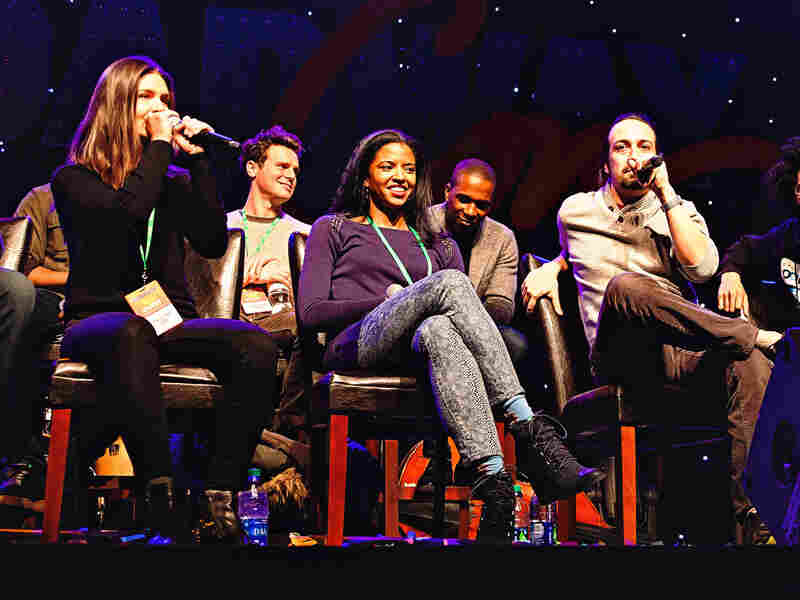 Hamilton creator and star Lin-Manuel Miranda does a freestyle rap about BroadwayCon while co-star Phillippa Soo lays down a beat. Cheri Root/Courtesy of The Honig Company hide caption 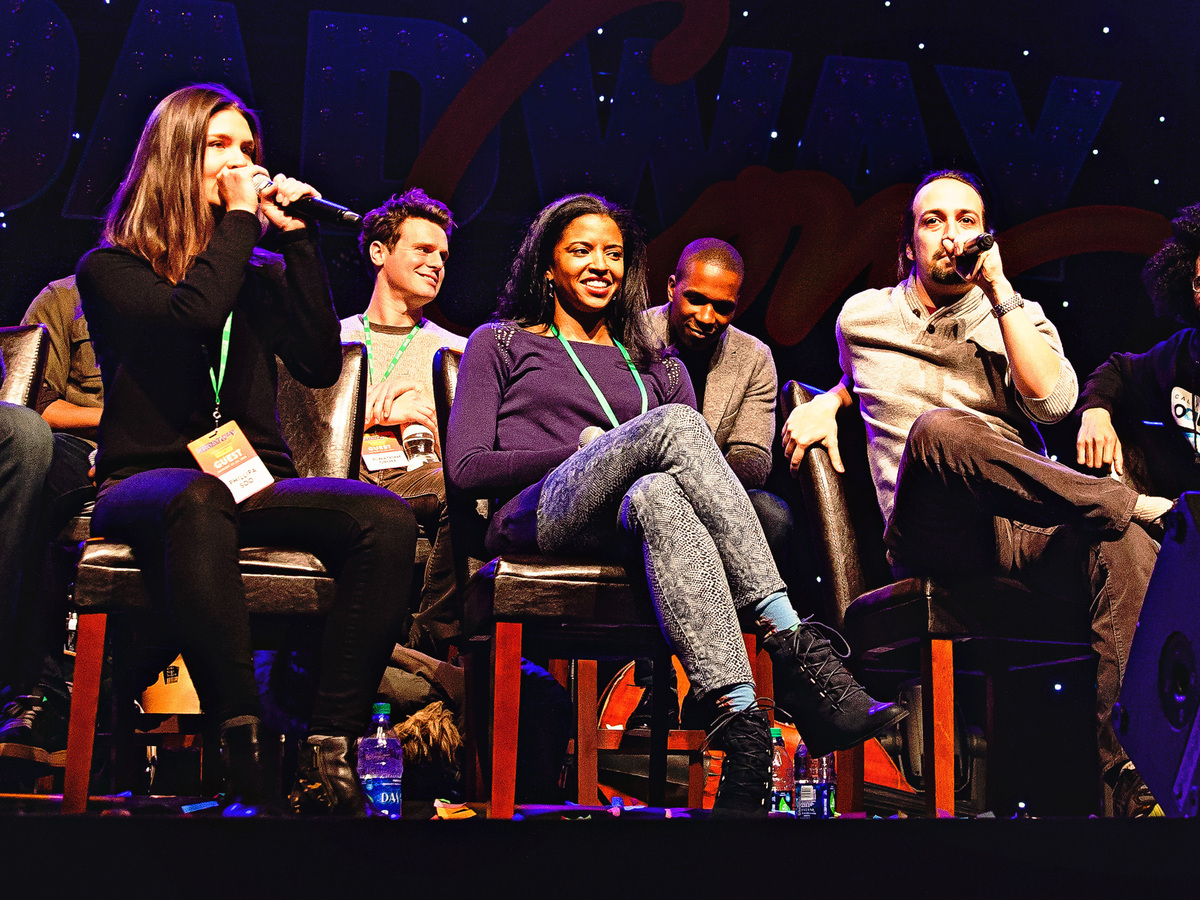 Hamilton creator and star Lin-Manuel Miranda does a freestyle rap about BroadwayCon while co-star Phillippa Soo lays down a beat.

Cheri Root/Courtesy of The Honig Company

She was also happy getting autographs and picking up lots and lots of merch. But clearly the best part was seeing the actors from Broadway shows — especially Hamilton. Lin-Manuel Miranda, the musical's creator and star, even treated the audience to a freestyle rap.

It was all too much for Lizzie, Tali and Jack, who by the end of the day were joined at the hip.

"Lizzie over here was sobbing the entire time," Tali said. "It was just so surreal because we all look up to those people; we watch every YouTube video, every interview. We do everything possible. Like, they were right in front of us. Yeah, it was insane."

And me? Well, I'm really too old for some of this stuff. But I've got to admit my 14-year-old self got a little bit excited when Vereen stepped onstage for the opening ceremony's finale.