Accessibility links
Book Review: 'The Sleep Garden', By Jim Krusoe Jim Krusoe's new novel is hard to summarize. It's about the odd inhabitants of an odd, bunker-like apartment building — but also about life, death, and the importance of stories. 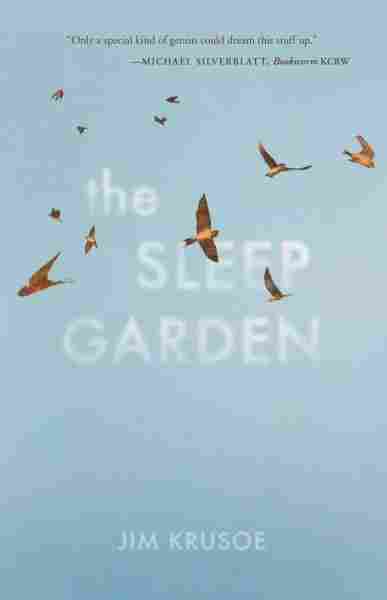 On the edge of a town called St. Nils sits the Burrow. It's a low mound of earth, just like any other burrow, but with a front door and six windowless apartments inside. It's not clear when it was constructed; some speculate it was built as a secret bunker, others think it was put up as an entrance to a tunnel used by drug smugglers. The townspeople can't agree on its origins; they can't even agree on how to pronounce the name of their town.

The mysterious apartment building is the main setting for Jim Krusoe's dreamy, beautiful new novel, The Sleep Garden. The Burrow is occupied by five people, "a lonely, [screwed]-up group of individuals," as one of them puts it. The only thing they have in common is that they're "twilight souls, caught somewhere between dark and light, knowing and unknowing. Neither one thing nor another. A crossbreed race."

If that description sounds vague, it's intentional. Krusoe never spells out exactly who they are and why they're in the Burrow, but that doesn't detract from how original and well-developed the five residents are.

There's Jeffery, an agreeable, unexceptional man still pining for his ex-girlfriend Madeline, "the Earth Mother of the place — kind of Anna Magnani crossed with Bette Midler." Madeline is now involved with Viktor, an intense day trader who thinks of nothing but money. Rounding out the tenants are Raymond, a gentle man obsessed with carving duck decoys, and Heather, a sweet sex line operator unsure of what she wants to do with her life.

The scenes in the Burrow alternate with ones from the outside world. We're introduced to the Captain, a cynical retired ocean liner pilot turned celebrity product endorser, and Junior, a former child actor and current psychopath who might be the Captain's son.

The Sleep Garden isn't a plot-heavy book; Krusoe relies on conversations between the characters — some real, some imagined — to move the novel forward. Inside the Burrow, the residents think and talk about their dreams and ambitions. Jeffery wants to write a television series; Madeline has her heart set on becoming a celebrity chef. Heather imagines writing a children's book about a failed mouse ballerina so kids "can get used to disappointment — because truly, hardly anyone gets to be what he or she wants to be."

'The Sleep Garden' is a difficult book to summarize. Krusoe has never had much use for conventional storytelling, and his new novel is more concerned with themes and ideas than plot.

Meanwhile, on the outside, the Captain finds mysterious holes dug in his yard, while Junior sends increasingly unhinged letters about crossbows to the local newspaper. The two have met before, on the set of Mellow Valley, a legendarily awful '90s television show about a group of pot farmers. (The sections about Mellow Valley are the funniest parts of the novel; the show tried, and failed, to introduce a catchphrase to America: "It's only the Nazis at the window.")

The Sleep Garden is a difficult book to summarize. Krusoe has never had much use for conventional storytelling, and his new novel is more concerned with themes and ideas than plot. But it's never dense or pretentious, and its lack of a conventional plot isn't a drawback in the slightest — the novel is atmospheric and weirdly suspenseful, punctuated with dark humor that still manages to be compassionate.

Krusoe's meditations on life, death, and the importance of stories are as startling as they are fascinating. At one point, Jeffery speculates on why we invent fictions about ourselves, and concludes that it's closer to dependence than self-preservation: "It's stories, Jeffery thinks, that are the heroin ... the addiction that keeps the poor old nag of the human race running around the track again and again — the promise that no matter how confusing things are, no matter how completely messed up and hopeless, even doomed, someday, somehow, everything will eventually make sense."

Even at his darkest, Krusoe is still generous; while The Sleep Garden isn't necessarily a hopeful book, it's one of the most acutely observed novels in recent years. Don't expect a big reveal at the end, an explanation that ties everything together — Krusoe is content to let some of the mysteries the book introduces stay unresolved.

And of course, that's exactly how life works. The five residents of the Burrow are, possibly, more like us than we realize, and maybe we're all "twilight souls," who, as the Captain explains, "reside in a moment that is inseparable from memory, who live in hope that is a kind of hopelessness, a dream identical to their lives, whose lives pass but never change ... caught in a place between a name and no name and without a future."