Accessibility links
After Overpayment Of Benefits, VA Wanted $38,000 Back The VA says it overpaid $24 million to 2,200 incarcerated vets, including Clay Hull. Despite filing required paperwork to forfeit part of his checks while in prison, he was still sent the full amount. 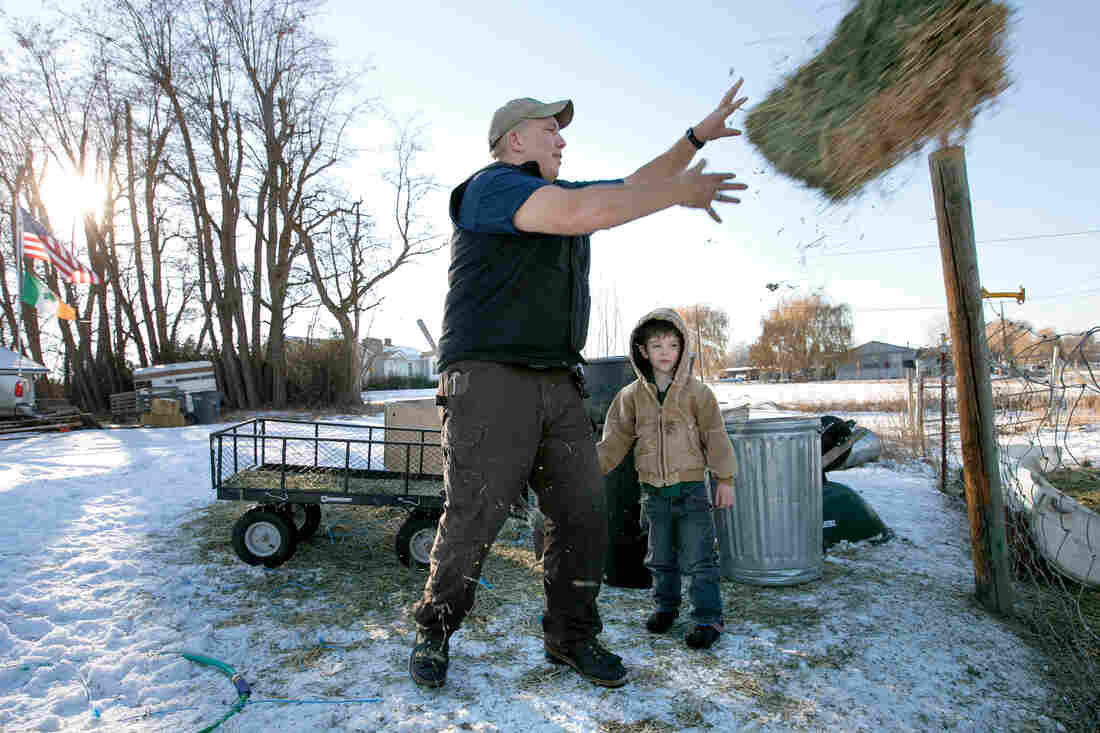 Clay Hull, along with his 4-year-old son William, feeds the cows on his 3-acre farm in Selah, Wash. After Hull was incarcerated for 18 months, the Department of Veterans Affairs sent him a bill for $38,000 in benefits it says he wrongly received. Gordon King for NPR hide caption 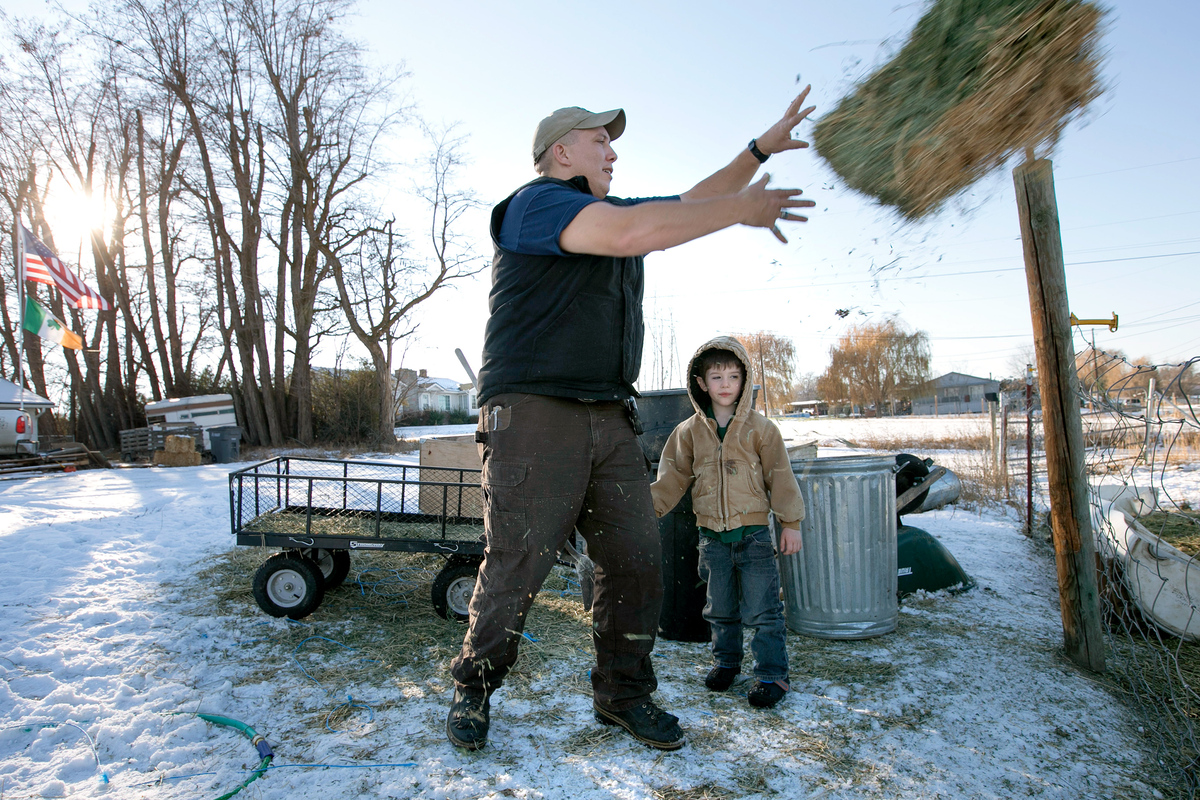 Clay Hull, along with his 4-year-old son William, feeds the cows on his 3-acre farm in Selah, Wash. After Hull was incarcerated for 18 months, the Department of Veterans Affairs sent him a bill for $38,000 in benefits it says he wrongly received.

Clay Hull has a stubborn sense of justice.

After an improvised explosive device blast in Iraq ended his time in the military, he fought the Army and the Department of Veterans Affairs over the amount of compensation they awarded him for his injuries.

"If I'm in the wrong, I'll admit it. But I'm not going to let somebody just push me around, especially the VA," he says.

It was complicated and drawn out, but Hull now gets the maximum the VA pays for disability.

The money pays for his mortgage, support for his young son and feed for the livestock on Hull's 3 acres in south central Washington — 2 1/2 hours from Seattle.

He has a day job as a shipping clerk and then comes home to work on his place. He's currently fixing a fence that runs along his property line.

Four years after he moved in, Hull went to prison on a weapons charge. Hull notified the VA he was in prison.

The VA was supposed to review Hull's disability payments to see if they should be reduced until he got out. But during Hull's entire 18 months in prison, the full VA payments kept coming.

In February 2014, when Hull was settling back into normal life, he received a letter from the VA: The agency wanted all the money back.

"Thirty-eight grand and they were wanting it in a lump sum payment," Hull says. "There was no negotiating with them. They would just shut off all benefits until they were repaid."

Hull couldn't pay. While in prison he had spent the money on his mortgage and child support for his son.

He says he had done his part by filing the right paperwork. Now the VA was threatening him.

"After the stress they caused, I'm sorry to have ever been a vet or served this country," he says. 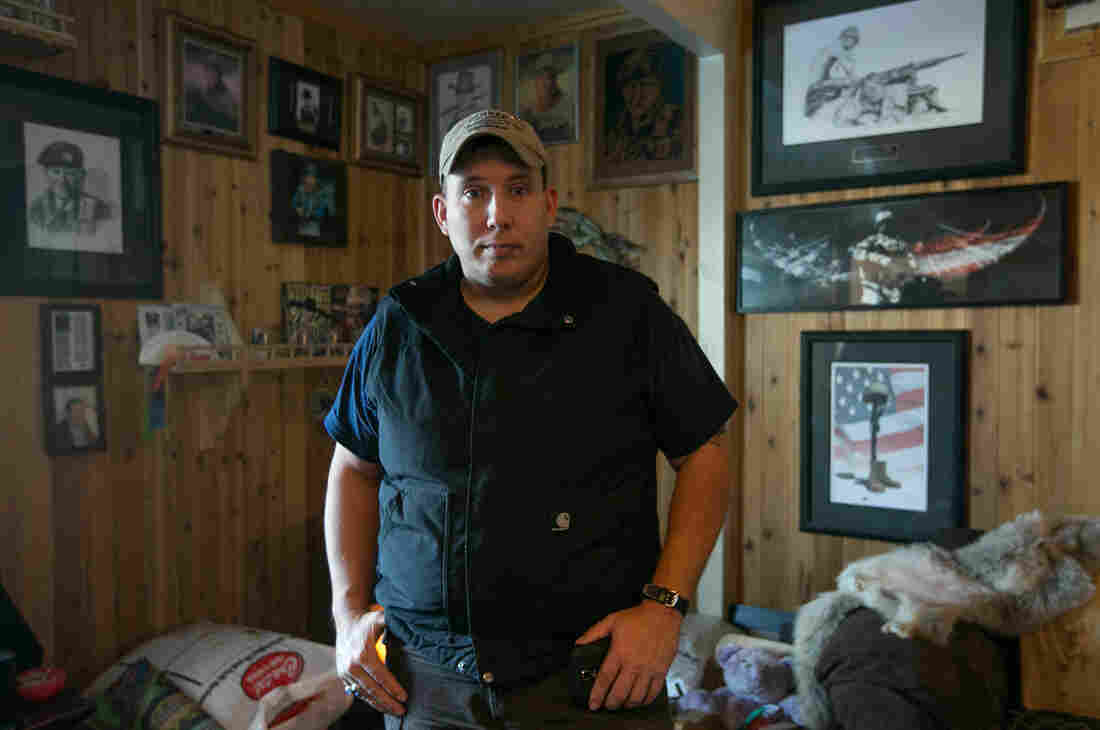 Hull stands in a room of his home decorated with photos of movie star John Wayne. "He was the only hero we had growing up. No one beats the Duke. You never heard about the Duke giving up," Hull says. Gordon King for NPR hide caption 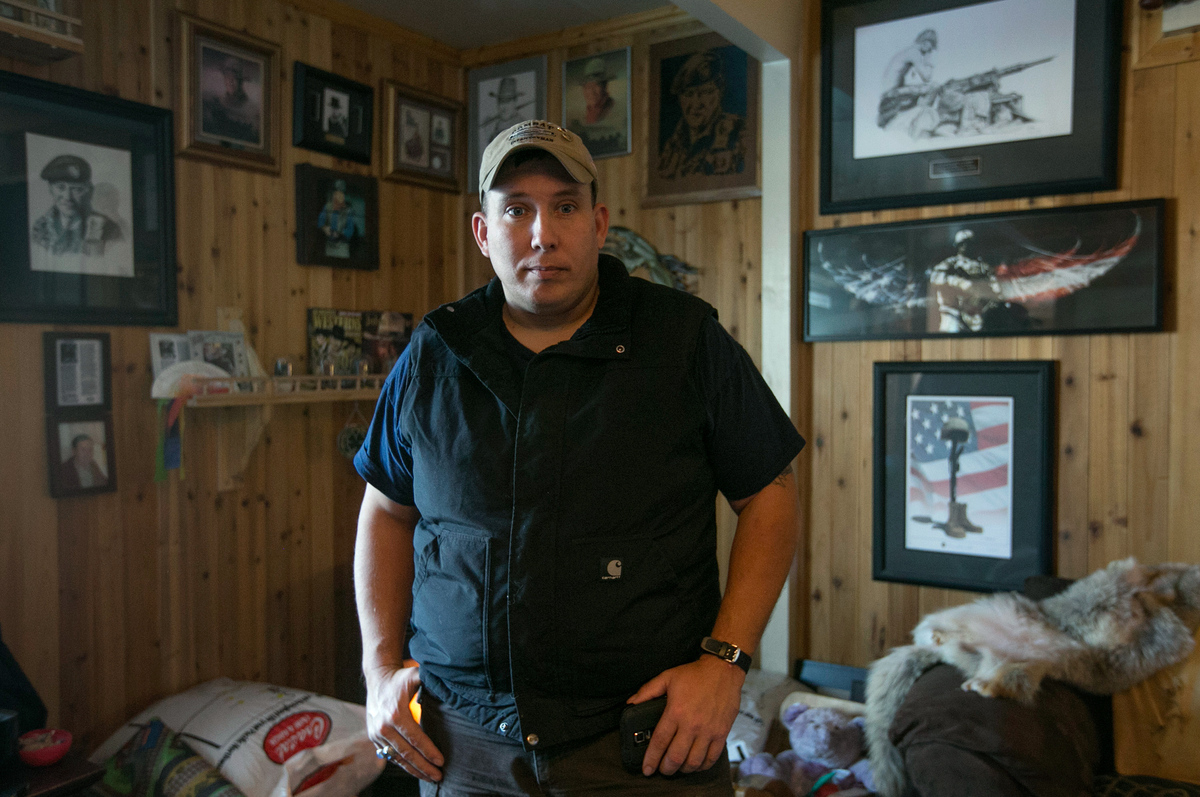 Hull stands in a room of his home decorated with photos of movie star John Wayne. "He was the only hero we had growing up. No one beats the Duke. You never heard about the Duke giving up," Hull says.

Hull took his paperwork to Leo Flor, an attorney and veteran who served eight years in the Army. At the time, Flor worked for the Northwest Justice Project, a publicly funded legal aid program in Washington state.

The first thing he had to do in Hull's case was deal with the threat to cut off his benefits.

He won that round, but getting Hull's benefits restarted was only the beginning.

Flor, who has worked with a lot of vets in this situation, had to prove that Hull's overpayment was the VA's mistake.

In 2015, the Department of Veterans Affairs says it overpaid 2,200 incarcerated vets more than $24 million. Money it then tried to get back.

The VA puts the burden on veterans. Vets are expected to file all the right paperwork — and do it from behind bars.

This story is part of a series by Back at Base reporters who have been exploring issues facing veterans in prison. Read related pieces here:

When Hull was in prison he was obsessive about keeping track of his correspondence with the VA. He made copies of every note he mailed them. In those letters he told them he was in prison and explained why he needed the benefits to support his family. He even kept receipts for money he withdrew to buy the stamps.

"You're always afraid you're going to lose an important piece of paper. And you have duplicates of so many things in so many different areas you end up with a stockpile of paper. I've honestly gone through at least a case of printing paper just making copies of things," he says.

All that paper meant Hull had a chance. And so he appealed.

The VA benefits system is set up to accommodate incarcerated veterans who have financial responsibilities. If it had worked, it's possible Hull would have been granted an exception to pay for his mortgage and his child support.

That request was never addressed, leaving Hull with a debt.

Flor was incredulous. It was as if the VA hadn't read anything he'd sent. On Dec. 23, 2014, Flor sent the entire package of records to the VA again.

Eventually, Hull received a short letter in the mail.

"June 4, 2015 — that's when they sent it," Flor says. "It says, 'This is to inform you that your request for waiver of your compensation pension debt has been approved by the committee on waivers and compensations.' " 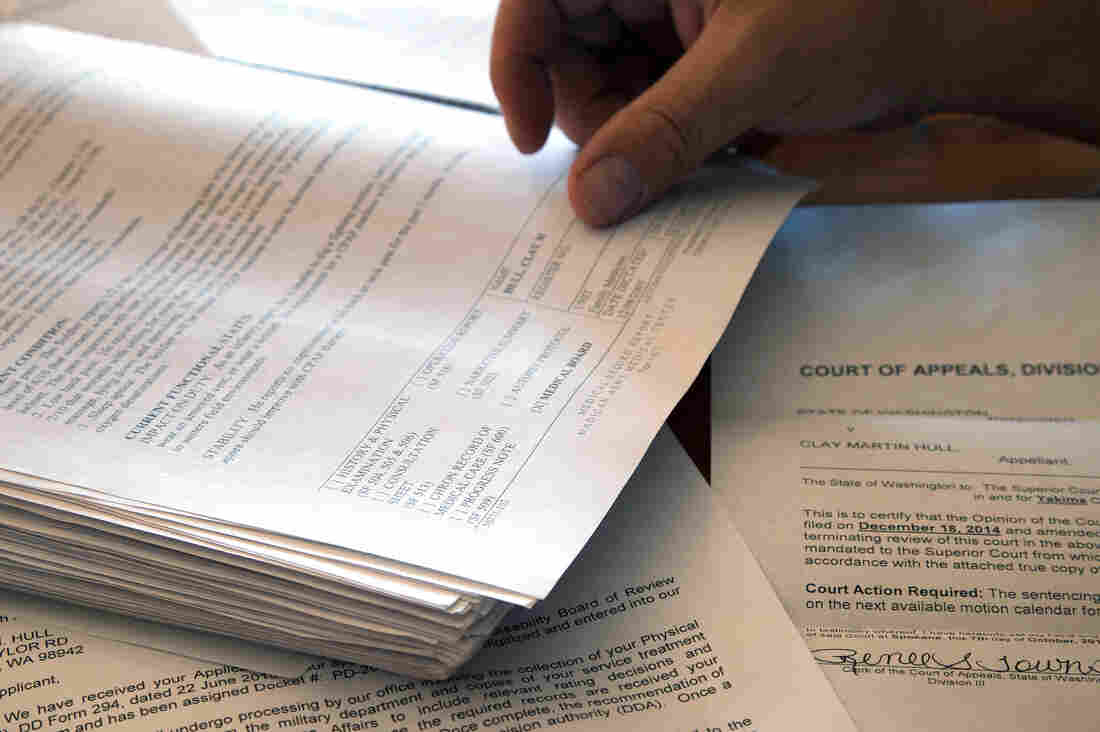 Clay Hull kept meticulous records of the paperwork he sent to the VA. Gordon King for NPR hide caption

The VA says it knows this is an issue.

"Without a doubt, we need to do a better job making sure that doesn't happen," says Dave McLenachen, the VA's acting deputy undersecretary for disability assistance.

"The month after we get the notice, we should be doing it quickly and doing the benefit adjustment to keep any debt as small as possible," says McLenachen. "There's no disagreement here. But given the resources available to us, we get to them as quickly as possible."

That still leaves many veterans like Hull on the hook to prove their case and win, or forfeit their benefits to pay back the debt.

Hull kept his home, but he's still angry over what he views as a betrayal of a promise by the VA.

"I'd worked awful hard, you know this place is paid for with blood money, my blood. Trying to get a future for him," he says, indicating his son, "and these a******* at the VA were gonna wipe that out in one fell swoop, because they didn't open up my mail, didn't read it, or just lost it, or just didn't care, and then thought they had an easy target."

The VA says it's working with the Social Security Administration to help better identify incarcerated veterans who are receiving disability payments.

Hull still has one more battle to fight. He's in court trying to overturn the weapons charge that landed him in prison in the first place.