Accessibility links
Review: Lucinda Williams, 'The Ghosts Of Highway 20' The singer-songwriter's new double-length set is a road album of a sort, as well as a remarkable distillation of Williams' writerly gifts. 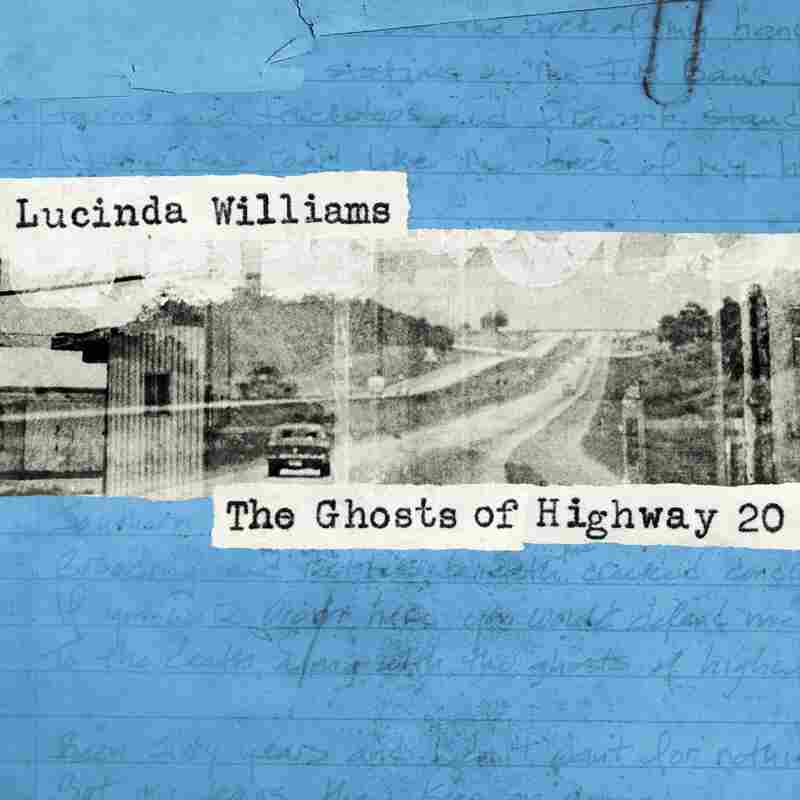 The Ghosts of Highway 20 Courtesy of the artist hide caption

Few roots-leaning songwriters have inspired such intense adoration, or as much emulation, as Lucinda Williams. Since her 1998 masterpiece Car Wheels On A Gravel Road, Williams has served as a template for many Americana hopefuls; if the bristly sensuousness of her songwriting voice is impossible to reproduce, plenty of followers have at least aspired to her leathery alt-country and blues-rock aesthetic and Southern Gothic scene-setting. It's worth noting that there seem to be just as many men as women among her acolytes.

So often, male songwriters are the ones admired for playing the role of the wanderer, free to inscribe their visions on the landscape and cultivate or sever bonds of emotional attachment as they choose. Meanwhile, songwriting women have been defined by supposedly domesticated, softer and — more to the point — lesser concerns, their natural inclination presumed to be that of spinning slight wounds and worries into major melodramas. Through sheer stubbornness and devotion to her craft, Williams has always resisted such binaries, excelling at humid portraiture of people and places, but also cathartic emotional confrontation, all of which she's approached with primal urgency as she strains to exert her will over memories, feelings and fate. Witness the vehemence with which she once vowed to ditch a spirit-sapping lover and scour every town in her path until she recovered her joy.

Williams' new 14-song set, The Ghosts Of Highway 20, is a road album of a sort, as well as a remarkable distillation of her writerly gifts. Traveling an old, familiar byway through the Deep South evidently conjured for her an array of images and impressions. The moony, ominous title track maps the connections between Williams' imagining of the past as a haunted domain and the ferocity of her songwriting voice. Concrete description of muggy days, "sweet coffee milk" and hellfire warnings lights her way into a clear-eyed appraisal of conflicted childhood experiences in the bittersweet reverie "Louisiana Song."

Elsewhere, Williams pivots to obstinacy, as she purges her existential pain through devil-may-care, down-home blues ("Bitter Memory"), fantasizes about challenging the cruelness of death ("If My Love Could Kill") and insists upon romantic perseverance ("Can't Close The Door On Love"). Even at her most whimsical, as in the gentle pop-folk waltz "Place In My Heart," she accentuates the tenacity in her affection. "Even though you take my love for granted," she sings, her drawl dissolving into a brittle vibrato, "I'm pretty strong when I admit it. You might be surprised at what I can manage, so don't you ever forget."

In the lyrics — all her own, with the exception of one co-write with her manager-husband Tom Overby, a cover of Bruce Springsteen's "Factory," and an adaptation of an erotic exchange from Woody Guthrie's posthumous novel House Of Earth — Williams cultivates economy and startling directness, occasionally establishing and repeating a pattern until it passes from self-indulgence into an almost meditative space. Framing her songs is the ornate interplay of two very different guitarists who've contributed to her albums in the past: Bill Frisell, with his spiderwebbed, iridescent guitar figures, and the grittier but no less precise Greg Leisz, who co-produced this collection with Williams and Overby. After the guttural blues growling that pervaded her previous album (Down Where The Spirit Meets The Bone) and some earlier recordings, Williams has circled back to a world-weary affect, a consciously burdened delivery style that emphasizes the emotional labor she's performing in her music. It's no wonder, really, that folks are willing to follow her down Southern back roads and into the visceral depths of desire.