Accessibility links
Gun-Toting Women Give Rise To Firearms Fashion Accessories Texas' open-carry law is now in effect, but many women prefer to keep their weapons concealed. A growing industry is meeting a range of gun fashion needs, from bra holsters to luxury handbags. 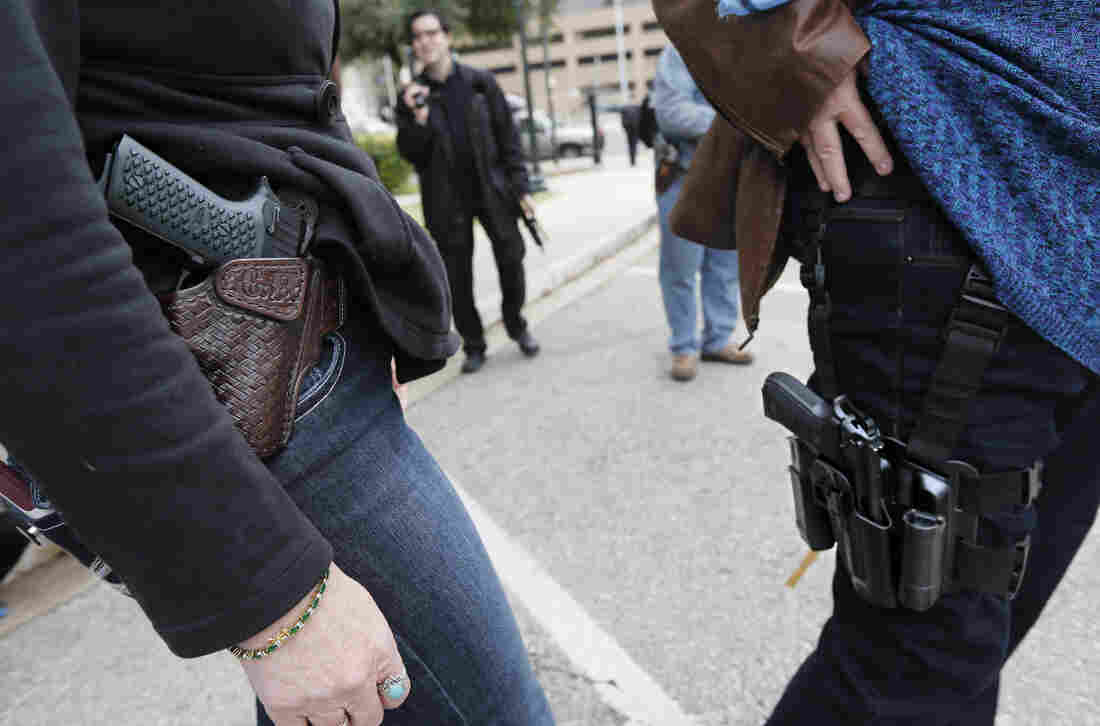 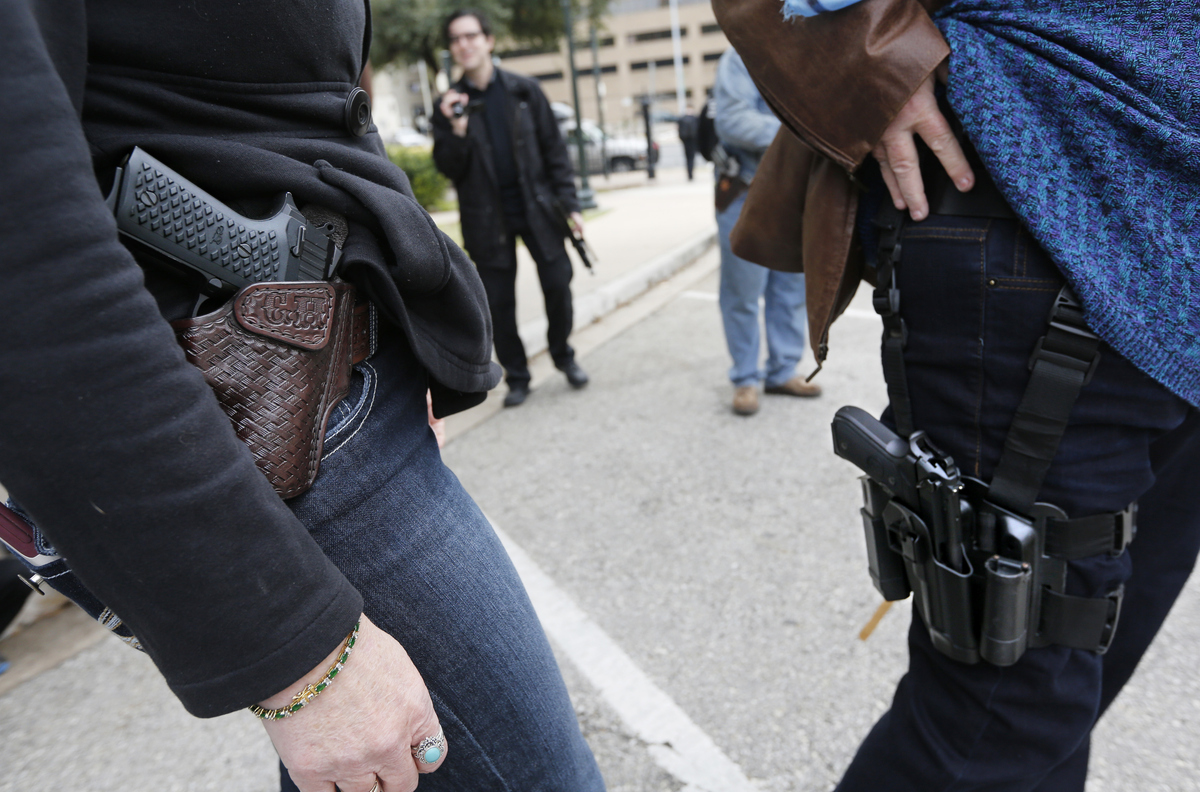 Two women compare handgun holsters during an open-carry rally at the Texas State Capitol in Austin on Jan. 1.

It's stocked with the latest pistols, shotguns and AR-15 military-style rifles. Chuck Payne, the store's manager, says he has sold to a lot more women recently. 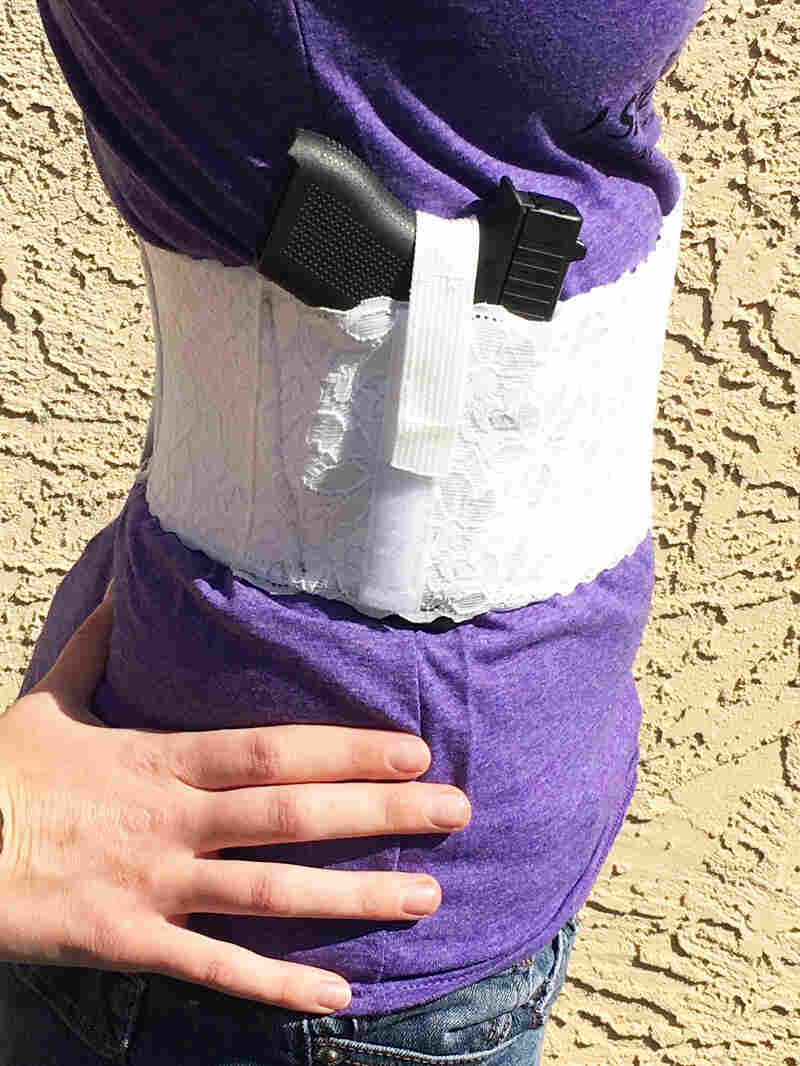 Items like this lace bellyband holster are designed specifically for women's bodies. Courtesy of The Well Armed Woman hide caption 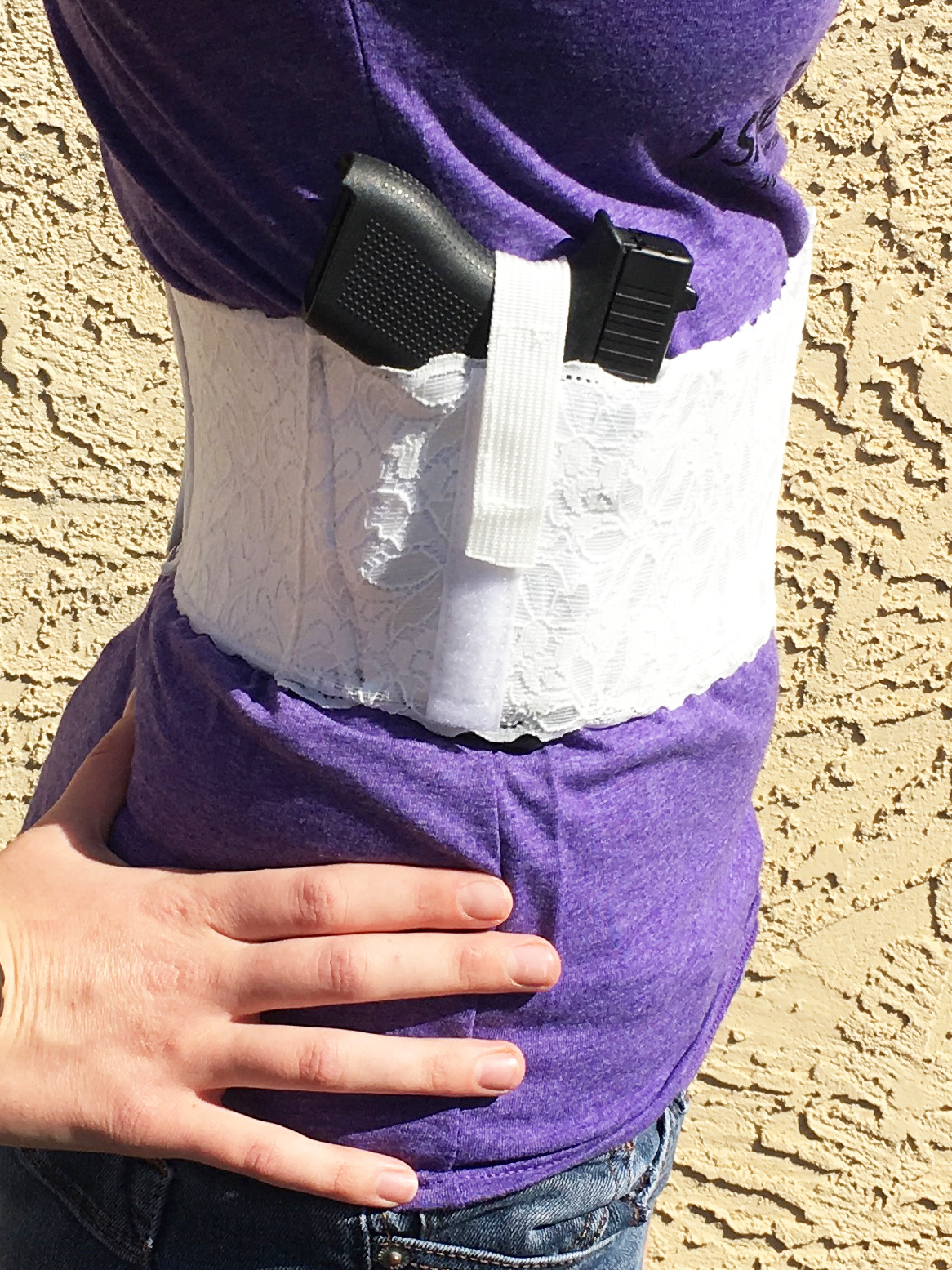 Items like this lace bellyband holster are designed specifically for women's bodies.

Courtesy of The Well Armed Woman

And with that different gun, they often want different accessories. At Ray's, there are purses with hidden pockets, bright pink tool kits with tiny screws for gun maintenance, and fruit punch-colored magazine loaders — so women "don't break off their fingernails and make their fingers sore," Payne explains.

That's when Texas' open-carry law went into effect, meaning that gun owners with concealed-carry licenses in Texas no longer have to hide their guns.

More than 800,000 people in Texas have a license to carry a gun, but many have chosen to keep their guns concealed — including many women. As a result, there's a growing accessory industry to meet their gun fashion needs.

There's no accurate count of female gun owners, but a 2015 report from the National Sporting Goods Association found that 5.4 million women said they went target shooting. That's up 60 percent since 2001.

There are several reasons women don't openly carry. Many of them simply don't want to draw attention to themselves. Then there's the logistics of actually wearing the gun. 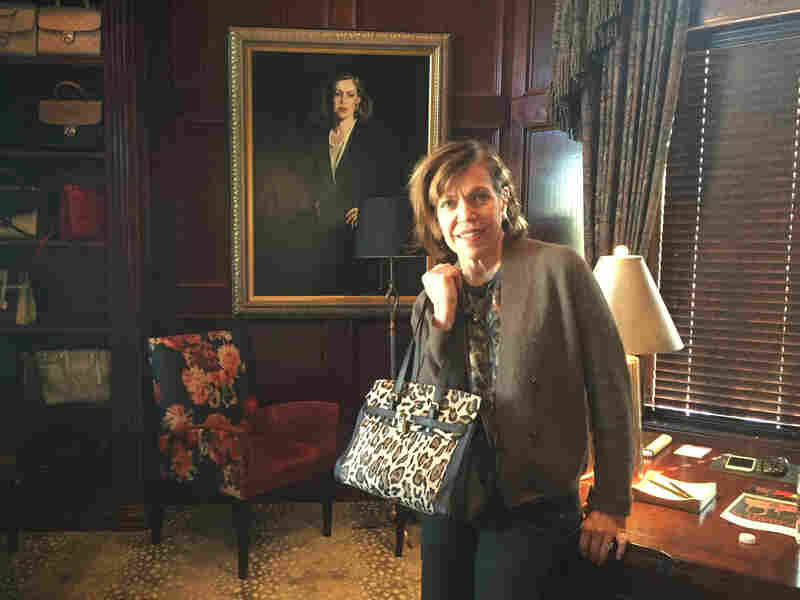 Designer Kate Woolstenhulme of Plano, Texas, created a line of concealed-carry handbags after she couldn't find one that was both safe and fashionable. Lauren Silverman/KERA News hide caption 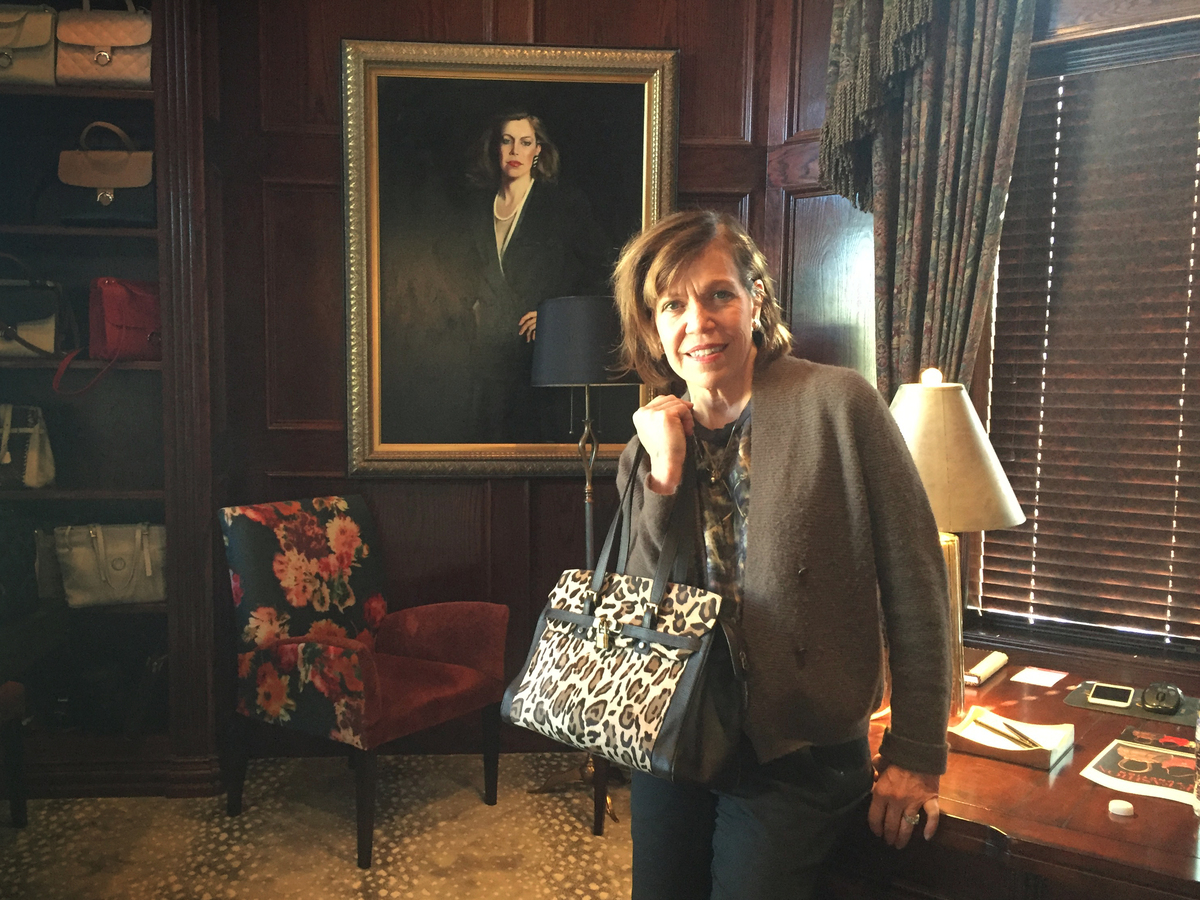 Designer Kate Woolstenhulme of Plano, Texas, created a line of concealed-carry handbags after she couldn't find one that was both safe and fashionable.

"Most concealed- and open-carry holsters are made for men," says Carrie Lightfoot, CEO of The Well-Armed Woman, an online store based in Arizona. She says a woman's body shape and size are important considerations when it comes to open or concealed carry.

"For example, a 32A bust could not conceal a Glock 19 very well — nor would a 42DD or a larger tummy allow for effective cross-draw carry," she says.

Still, the vast majority of women don't openly carry. And that means one of the hottest accessories is the concealed-carry purse, which is Kate Woolstenhulme's business.

In her Plano, Texas, home office, Woolstenhulme unpacks one of her newest designs: a black leather purse with a herringbone embossed pattern. She introduced her first line of concealed-carry bags in 2009, after failing to track down a handbag that was both safe and fashionable for her 9 mm Beretta Nano handgun.

"I was interested in making something that really functioned and yet still making sure that it looked as if that woman had walked into Nordstrom's or Neiman's or Marshalls or whatever they shop at," Woolstenhulme says.

The ostrich and crocodile-skin handbags sell for thousands of dollars. Others are a few hundred. Many of the bags have exterior holster pockets — all of them have locking devices.

The National Sporting Goods Association report found that women who bought a gun in the last year spent on average $870 on firearms and more than $400 on accessories.

Both Woolstenhulme and Lightfoot warn women to choose new holsters and bags wisely — just because it's made in pink doesn't guarantee it was designed for a woman's body.