Accessibility links
Inmate-Run Program Helps Vets Behind Bars Navigate VA Maze For the past decade, a Veteran Service Office operating inside a prison has aided 1,000 incarcerated veterans in receiving more than $15 million in benefits for themselves and their dependents. 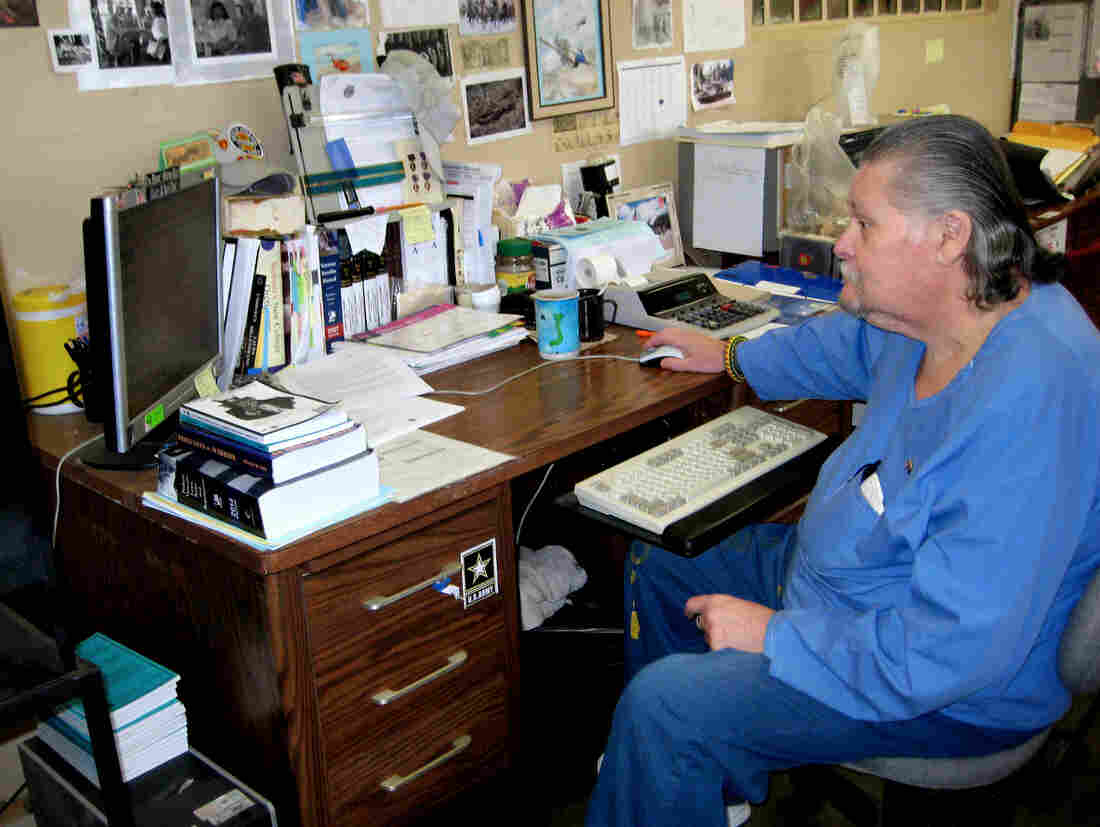 Inmate and Vietnam veteran Ed Munis works on his computer at the Veteran Service Office in California's Soledad Correctional Training Facility, which he helped start more than a decade ago. Krista Almanzan/KAZU hide caption 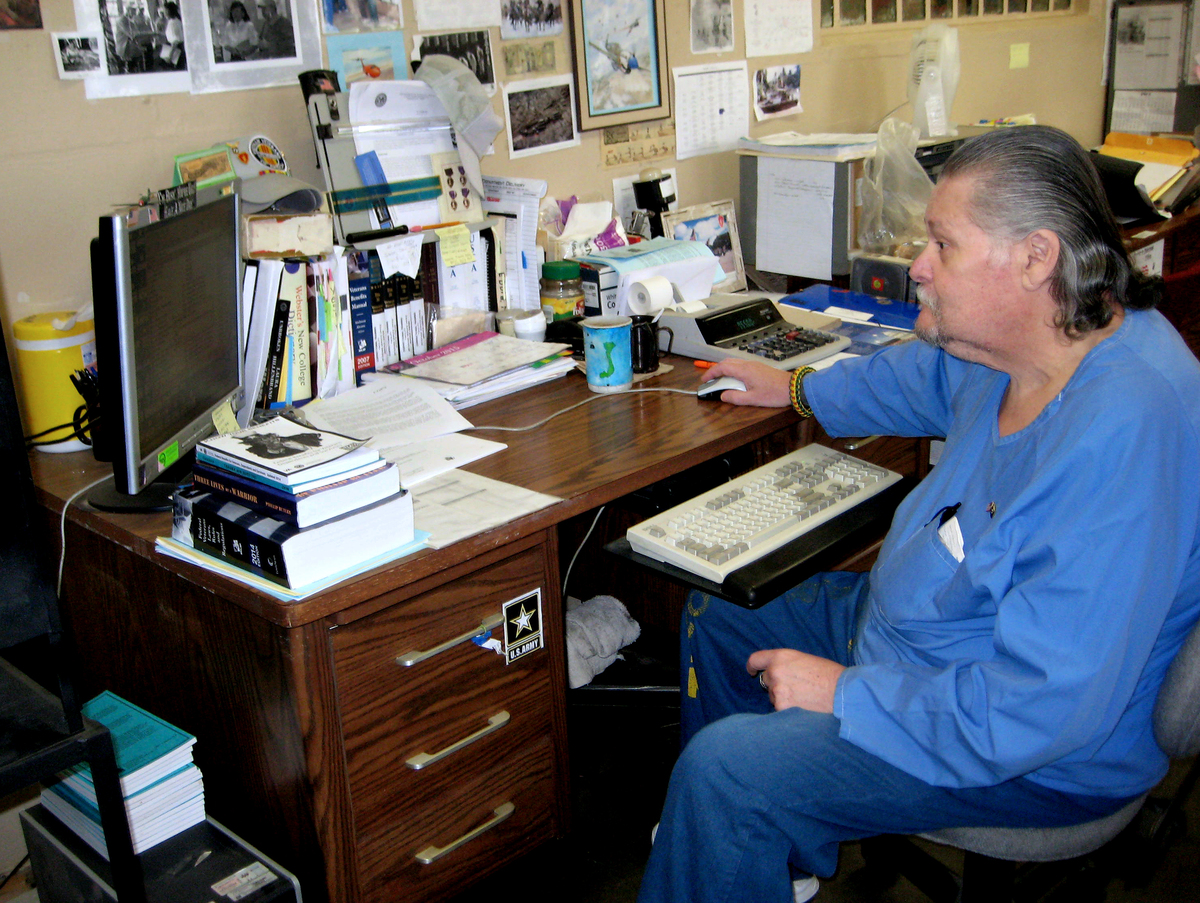 Inmate and Vietnam veteran Ed Munis works on his computer at the Veteran Service Office in California's Soledad Correctional Training Facility, which he helped start more than a decade ago.

Veterans serving time behind bars are still entitled to some — but not all — of the benefits earned through military service. Wednesday, we told you the story of the struggle one former inmate faced trying to inform the Department of Veterans Affairs about his incarceration. Today, we look at a one-of-a kind inmate-run program trying to help other incarcerated veterans work and communicate with the VA to get their benefits.

Jerry Lytle never collected the benefits he earned from service in the Army, and once he was behind bars, he didn't realize he still could.

"In 2004, I met up with another veteran who was getting benefits, and he said, 'You know, you should get your benefits. You're entitled to them,' " Lytle says.

He's serving 32 years to life for murder. Even so, he's still entitled to disability benefits from the Department of Veterans Affairs because he suffers from PTSD and exposure to Agent Orange in Vietnam.

But he's not eligible for the amount he would have received on the outside. At most, Lytle can get just over $100 a month. If he wasn't incarcerated, his monthly payment would be more than $1,000.

When he filed for disability, he says he got the runaround.

"I think because I was in prison, I couldn't deal directly with them. I was dealing with them through the mail, the only process I had," he says. "I really believe that they were really trying to discourage me."

He didn't give up, but it wasn't persistence that finally worked. It was a transfer to the Soledad Correctional Training Facility in California's Salinas Valley, which is home to a unique inmate-run program.

This story is part of a series by Back at Base reporters who have been exploring issues facing veterans in prison. Read related pieces here:

Inside the prison is a Veteran Service Office, where incarcerated vets can get help filing — and fighting for — VA benefits, including disability, education and burial benefits for those who die behind bars.

The office is a large cinder-block room with windows looking out on the prison's main corridor. A black POW/MIA flag hangs on the back wall next to filing cabinets, and there's a bookcase filled with thick federal code books.

Ed Munis, an inmate who helps run the office, says this all started because of fellow Vietnam veteran and inmate Michael "Doc" Piper, who also runs the office.

"I got here in 2003, and right away he found out a little bit about my background and pestered me for a couple of years till we got going," Munis says.

It's a complicated background: Munis is serving 25 years to life for his wife's murder. Before that, he was a lobbyist in Sacramento working on veterans issues.

With the warden's approval, they started the office about 10 years ago. Now, they're not only helping veterans in this prison, they are also working with some incarcerated vets by mail at every prison in California and in 23 other states, where word of their work has spread via newsletters. Munis says most vets didn't know they were still eligible for benefits.

"There's an awful lot of people that are in the VA, as well as general public, that are not too excited about helping out convicted felons, people that are incarcerated," Munis says. "So that's been a struggle. So far, we've prevailed."

On the two computers in their office, they've kept detailed records of their work. Their numbers show over the past decade they've helped about 1,000 incarcerated veterans get more than $15 million in benefits for themselves and their dependents.

Still it's a tough job to do from prison. The computers don't have Internet access and their printer is locked in a cage so staff can review what they print. 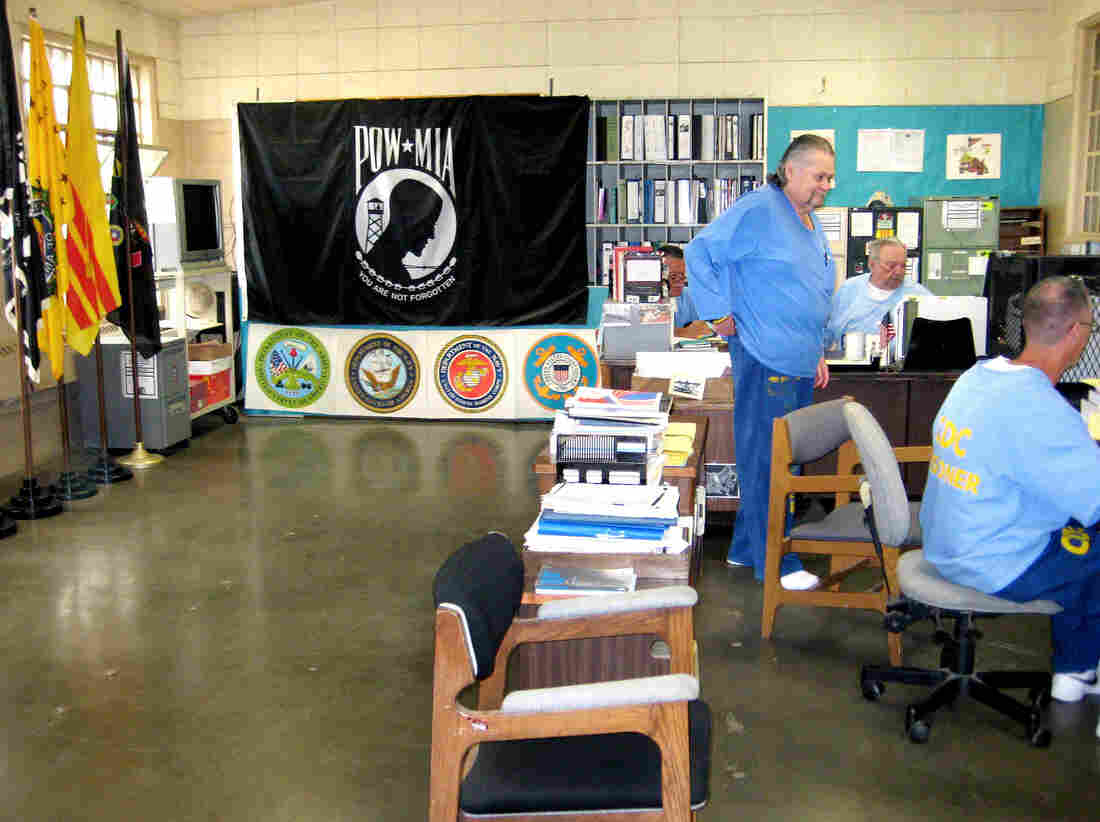 Since the prison Veteran Service Office started more than 10 years ago, it has helped more than 1,000 incarcerated veterans get VA benefits. Krista Almanzan/KAZU hide caption 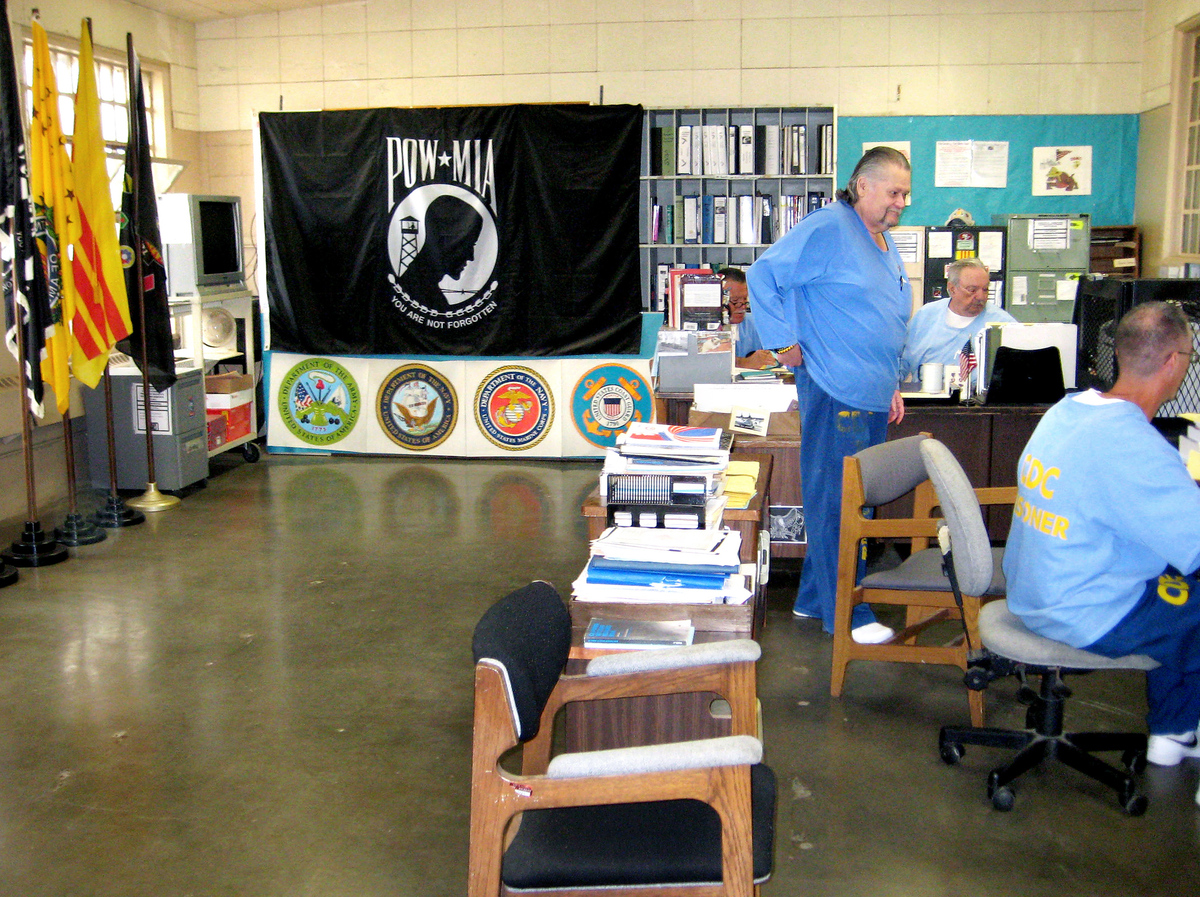 Since the prison Veteran Service Office started more than 10 years ago, it has helped more than 1,000 incarcerated veterans get VA benefits.

They rely on help from Monterey County Veteran Service Officers, who essentially do on the outside what Munis and Piper do on the inside. The VSOs help the prison office by reviewing the inmates' claims and submitting them to the VA.

"And plus we can access and check status on appeals and help them with appeals on the outside," says Monterey County VSO George Dixon.

He says his job is not to judge these veterans for their crimes, but to help them get what they've earned.

"When you look at some of the discharges, combat experience, Vietnam, Gulf War, Persian Gulf, Grenada, Panama," says Dixon. "Those are the individuals that are in there."

It's why his office is working to develop a similar program at the neighboring Salinas Valley State Prison. There they have trained seven inmates to help veterans start the VA paperwork.

"I plan on paroling here. I plan on continuing to do this until they put a tag on my toe and they bury me," he says.

His first chance at parole comes up in a couple of years. If he gets out, he says he'd work to expand this program in prisons up and down the state.