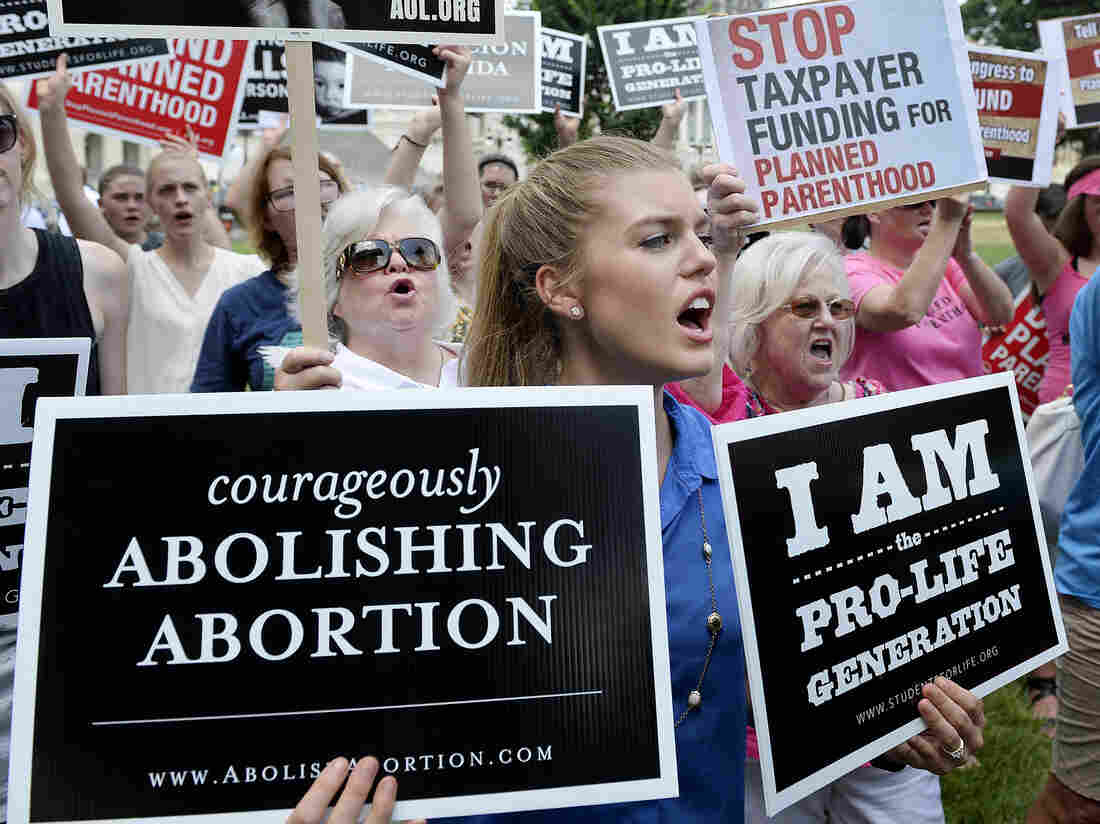 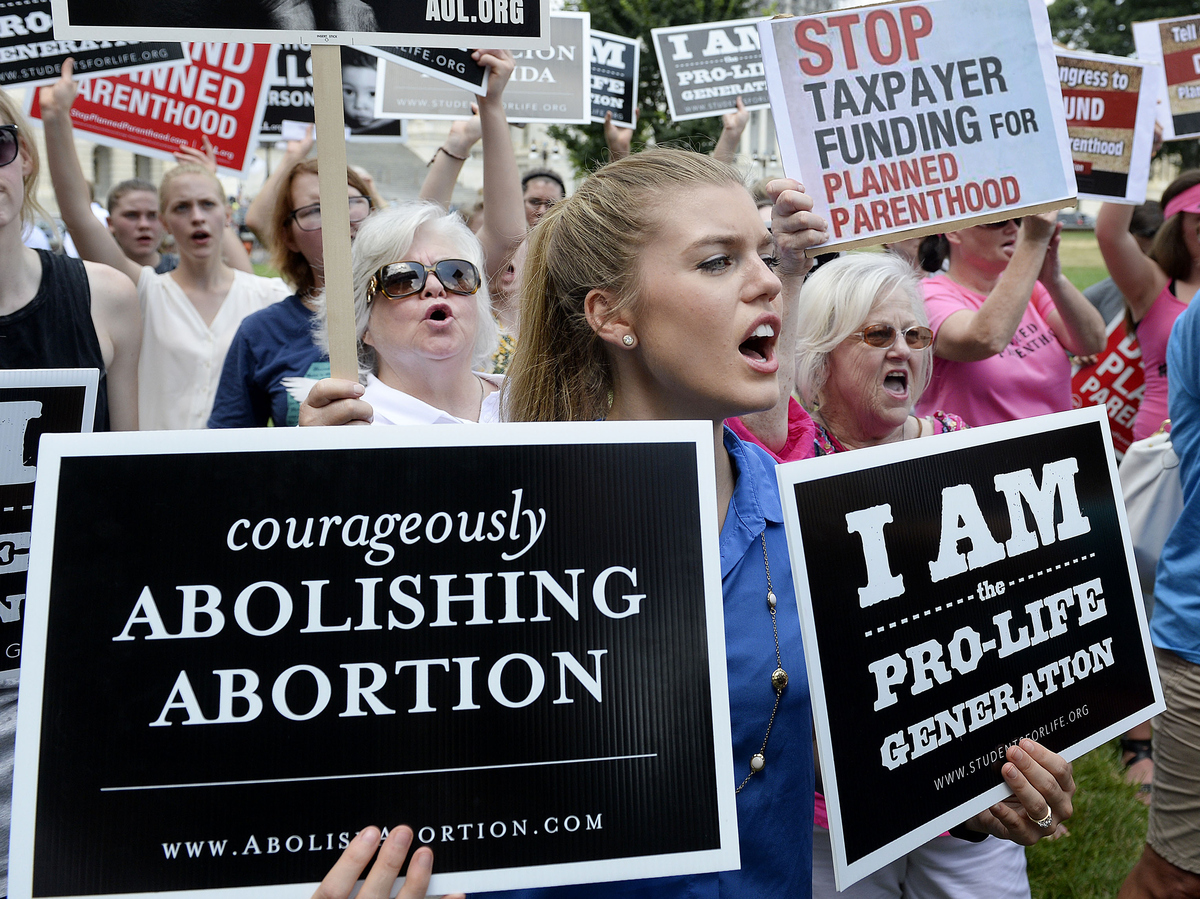 The Planned Parenthood undercover videos helped intensify calls around the country for states to cut the organization's funding.

Once again this week, an investigation into Planned Parenthood's alleged sale of fetal tissue came up empty.

A grand jury in Harris County, Texas, voted to indict in a state investigation of Planned Parenthood. But it didn't indict the reproductive rights organization. In an unexpected turn, the grand jury indicted two anti-abortion activists from the Center for Medical Progress. That is the organization that famously last year released videos that it said depicted Planned Parenthood illegally trying to sell fetal body parts.

The videos served as a major rallying point for Americans opposed to abortion. They fueled a threat to shut down the government as well as a push in several states to cut funding to Planned Parenthood.

They also inspired a wave of investigations. After the videos' release last summer, a number of states quickly decided to look into whether the tissue sale the videos purported to show was happening within their borders.

Here's what happened in each of those cases:

In July 2015, Florida Republican Gov. Rick Scott ordered a state investigation to see whether Planned Parenthood was "selling body parts," Politico Florida reported at the time. On Aug. 5, the agency investigating the clinics released its findings, saying that none of the state's Planned Parenthood sites had been selling tissue or body parts. However, the investigation did find that one clinic out of Florida's 16 wasn't correctly keeping its records of fetal remains. In addition, three were found to have been performing second-trimester abortions while only being licensed to perform abortions in the first trimester, according to Politico. Planned Parenthood disputed this, arguing that the state had changed the rules on how it measured the first trimester, as Reuters reported. Though it briefly looked like the state and Planned Parenthood agreed on the issue, Politico reported, the organization was fined in September 2015.

Republican Gov. Nathan Deal on July 16, 2015, asked the state's Departments of Community Health and Public Health to investigate whether Planned Parenthood was engaging in the "horrific practice" that the CMP's videos claimed to depict. On Aug. 13, the Department of Public Health reported that all five of the clinics had "proper procedures in place for burial or internment of [fetal] remains," as NPR member station WABE reported.

In July 2015, Republican Gov. Mike Pence asked the state Department of Health to investigate the state's Planned Parenthood clinics, to see whether they were engaging in any sale of fetal tissue, local TV station WTHR reported. Weeks later, the department said it had "concluded there was no evidence of this type of activity" at three Planned Parenthood facilities in the state, as the Indianapolis Star reported.

On July 21, 2015, Republican Gov. Sam Brownback asked his state's Board of Healing Arts "to address the issue of sale of tissue and organs from the unborn" at Planned Parenthood facilities, the Topeka Capital-Journal reported. This month, the board said it had "determined no further action would be taken at this time," per the Associated Press.

On July 17, 2015, Republican state Rep. James Lyons sent a letter to Democratic state Attorney General Maura Healey, asking her to launch an investigation into whether Planned Parenthood was participating in fetal tissue sales like those the CMP video purported to show, as the Boston Herald reported. On July 29, Healey responded in a statement that the state's Planned Parenthood sites were "fully compliant with state and federal laws regarding the disposition of fetal tissue" and were not participating in any fetal tissue donation, though it is legal in that state, as the Boston Globe reported.

On July 16, 2015, Republican state Sen. Phil Pavlov asked the state to investigate "to determine whether or not any Michigan-based facilities have participated in the horrifying sale of babies' body parts," MLive reported. In October, the two departments handling the investigations issued a statement, saying that "there is no evidence to date that illegal practices are occurring," MLive reported.

On July 21, 2015, Democratic Attorney General Chris Koster started an investigation, saying that "the questions raised by [CMP's] videos require careful review," local TV station KMBC reported. In September, a release from Koster's office said the investigation turned up no "irregularities involving the transmission, examination, or disposal of the fetal organs and tissue" from abortions at the state's one clinic that performed surgical abortions, as the New York Times reported.

In September 2015, Nevada Republican Attorney General Adam Laxalt sent a letter to Nevada Planned Parenthood facilities. Mentioning the videos, the letter asked the sites about their abortion procedures and also asked if they donate fetal tissue, as the AP reported. In December 2015, his office closed the investigation, saying that the facilities weren't performing surgical abortions and that there also wasn't evidence of tissue donation, according to the AP.

In mid-July 2015, Ohio Republican Attorney General Mike DeWine announced that he was launching an investigation into whether any Planned Parenthood clinics in the state were selling fetal parts, according to Cleveland.com. In December, the state released the investigation, revealing that there was no evidence of any such sales. However, investigators did find that fetal remains were disposed of via incinerators or landfills, which, while not illegal, DeWine claimed "violate[d] Ohio administrative code," as Cleveland.com reported. (An Ohio Planned Parenthood official disputed his claim.)

In July, two Republican state legislators asked the state attorney general to investigate whether Planned Parenthood in Pennsylvania was selling fetal tissue, Philly.com reported. In August, state Health Secretary Karen Murphy responded in a letter that there was no evidence that any Pennsylvania facilities were buying, selling or donating fetal tissue, as The Hill reports.

In July 2015, Republican state Attorney General Marty Jackley instructed the state Health Department to investigate whether fetal tissue sales were occurring at Planned Parenthood, the AP reported. On Aug. 11, 2015, Jackley told the Associated Press that "there are no reports, complaints or inspection records that would demonstrate any evidence (of) illegal activity in South Dakota at this time."

In late July 2015, 34 Republican lawmakers wrote a letter asking Democratic Attorney General Bob Ferguson to investigate whether the state's Planned Parenthood clinics were selling fetal parts, the Seattle Times reported. In November, Ferguson reported that the state had found no evidence that the state's affiliates were selling fetal tissue. Washington is home to one of only two clinics (the other being in California) that Planned Parenthood says currently donate any fetal tissue to researchers.

"The Health and Human Service Commission's inspector general and the attorney general's office have an ongoing investigation into Planned Parenthood's actions," Abbott said. "Nothing about today's announcement in Harris County impacts the state's ongoing investigation."

In addition, the Ohio Senate this week voted to block government funding to Planned Parenthood. CMP's videos factored heavily into the debate over that bill, which will go to Republican Gov. John Kasich, who is firmly anti-abortion and is expected to sign it.

Jennifer Ludden contributed to this report.

This article has been updated to more fully reflect the dispute between Florida and Planned Parenthood on how the first trimester is counted.