Accessibility links
The Last Candidate To Skip The Final Iowa Debate? Ronald Reagan Television debates have been a mainstay in presidential campaigns since 1976. Now, the GOP presidential front-runner is taking a big gamble just days before the Iowa caucuses. 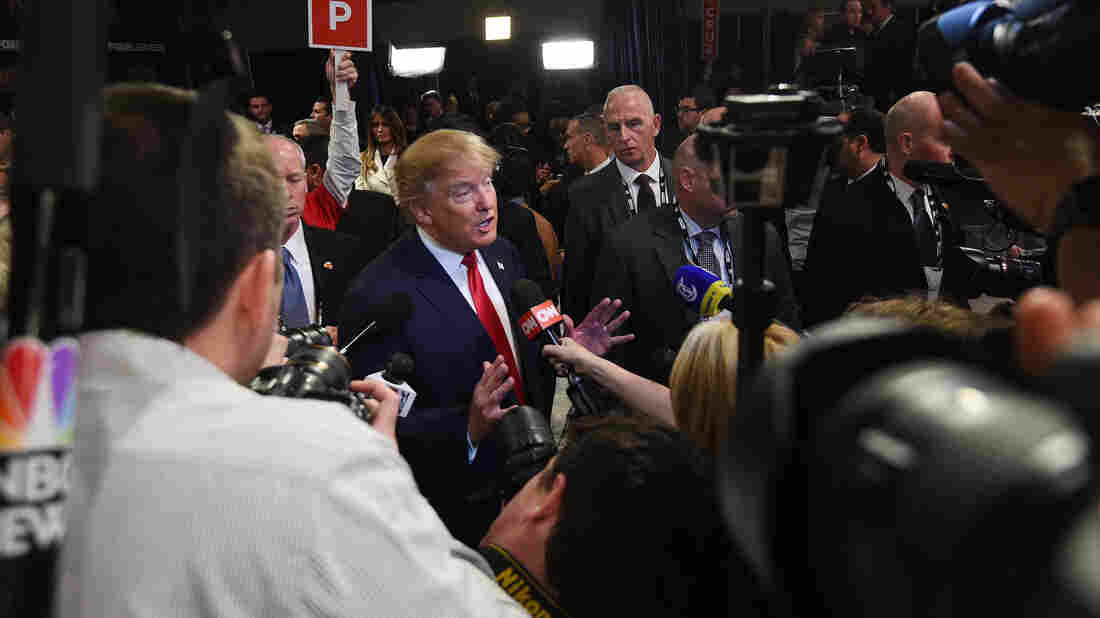 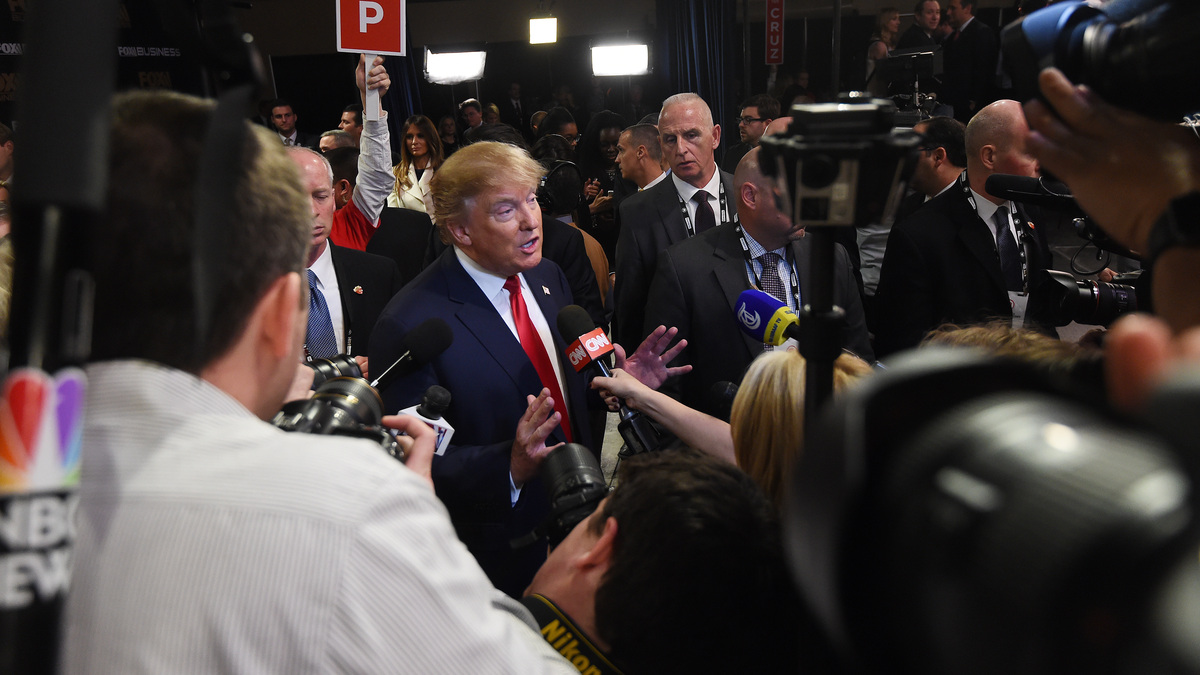 GOP presidential candidate Donald Trump will skip Thursday evening's Fox News debate amid a skirmish with the network over the inclusion of moderator Megyn Kelly.

If Donald Trump keeps his promise not to appear at Thursday night's Fox News debate, it will be the first time in recent history that a top candidate, let alone the front-runner, will skip such a high-profile event so close to Election Day.

But, if anyone can pull off such a stunt and still come out on top, it's probably Trump. He's been breaking all the usual political rules this cycle.

"It's totally unprecedented. Candidates die to be on the stage," said Iowa State University political science professor Steffen Schmidt. "The ones that are at the loser table are dying to be on the main debate. For a candidate to walk away from that is crazy — but crazy like a fox."

And he just might be. Trump will hold a "Special Event to Benefit Veterans Organizations" at Drake University in Des Moines, Iowa, at the same time, daring viewers to watch on competing networks against the Fox News debate.

Late Wednesday night, the flamboyant reality TV star, and billionaire real-estate mogul, showed no signs of backing down. Trump's campaign manager, Corey Lewandowski, reiterated that the network hadn't treated Trump fairly, and the campaign would be having its own counterprogramming.

It's a maneuver that probably only works for someone like Trump — who can command media attention at will and stir reporters into a frenzy with a single tweet. And it's one that would only work in a 24-hour news cycle, social media saturated environment. The perfect storm.

The last time a candidate tried to skip the final debate in Iowa, it didn't work out so well, at least in the short run.

In 1980, Ronald Reagan was the national front-runner and thought skipping the Des Moines Register debate — the first televised GOP presidential debate ever — wouldn't hurt him. But George H.W. Bush had a standout performance; Reagan took heat in the state for his absence, and it was Bush who went on to narrowly win Iowa.

"We blew Iowa, and I take responsibility for that, because I should have insisted on having him in there more," said Charlie Black, a veteran GOP campaign operative who was Reagan's Midwest political director.

It was a mistake Reagan wouldn't make again. And later in New Hampshire, it was Reagan who insisted on having more candidates included in the Nashua Telegraph debate so he wouldn't be facing Bush solo — so much that he eventually funded the debate himself, leading to his memorable, "I paid for this microphone" moment. Reagan won the Granite State, and, of course, the nomination and presidency.

Reagan's initial skip was more a political calculation — and one he likely wouldn't have made in the current media environment. Trump's move is different.

"I guess he feels he's still going to be the center of attention, but actually this reinforces some of the worst parts of his character," said Black, who was also a senior adviser for John McCain's presidential bids. "A lot of people like him, but the people who don't think he's arrogant. It's all about him, and he'd rather fight than participate."

McCain also seriously threatened to skip one of the presidential debates after the 2008 economic collapse. But that also reinforced a narrative about McCain that Barack Obama's campaign was willing to push — that he couldn't handle doing more than one thing at a time, a not-so-subtle dig at McCain's age.

Televised presidential debates didn't begin until 1960 — where the infamous face-off between Democrat John F. Kennedy and Republican Richard Nixon reinforced stereotypes that would define the race. The young, telegenic Kennedy shone on TV compared to a harried, sweating and older Nixon. Kennedy would win the general.

Four years later, though, President Lyndon B. Johnson, who took office after Kennedy was assassinated, was leading in the polls and feared a debate could actually damage him, so he refused to debate Republican nominee Barry Goldwater.

In 1976, Democrat Jimmy Carter and GOP President Gerald Ford would finally meet on the televised debate stage. And, for the most part, they've been a political mainstay each four years. In 1980, Carter wouldn't debate Reagan initially, because independent John Anderson was allowed in. But later, only the two major party candidates would meet.

In both parties' primary debates, sometimes candidates have skipped in the past — or weren't invited, as was the case with some GOP hopefuls this year with such a large field.

In 2011, with GOP primary debates beginning earlier than ever, eventual nominee Mitt Romney skipped the cycle's first debate in South Carolina, but he hadn't officially announced for president yet.

Coming less than a week before Iowa though, Trump's boycott is different, and could also be perceived differently by voters.

"People who are supporting him already, they're not going to move that much. But if you have an individual who may be on the edge of going with him, they might be turned off in a certain extent," predicted University of Arkansas professor Patrick Stewart, who has been studying this cycle's GOP presidential debates.

The decision gives his rivals free shots to attack the absent Trump — depriving him of a chance to defend himself on stage.

"For someone who relies on a very forceful argument, this could be problematic, especially because of the fact he looks like he's running away from the debate," Stewart said. "It opens up the opportunity for other candidates to take potshots at him, and he can't respond. One of his greatest strengths has been his ability to respond quickly."

But Schmidt, the Iowa political science professor, said it won't change much on the ground — because Trump has been rewriting the rules all along.

"Trump combines two things — feeding to people's anger and anxiety, and he also feeds to people's desire for entertainment," Schmidt said. "It's bread and circuses."