Accessibility links
6 Questions Ahead Of The Trump-Fox Split-Screen 'Squirmish' Trump commands the spotlight once again as he ditches a Fox News debate. The other cable news networks — which don't have broadcasting rights to the debate — will probably air the Trump event instead.

6 Questions Ahead Of The Trump-Fox Split-Screen 'Squirmish'

6 Questions Ahead Of The Trump-Fox Split-Screen 'Squirmish' 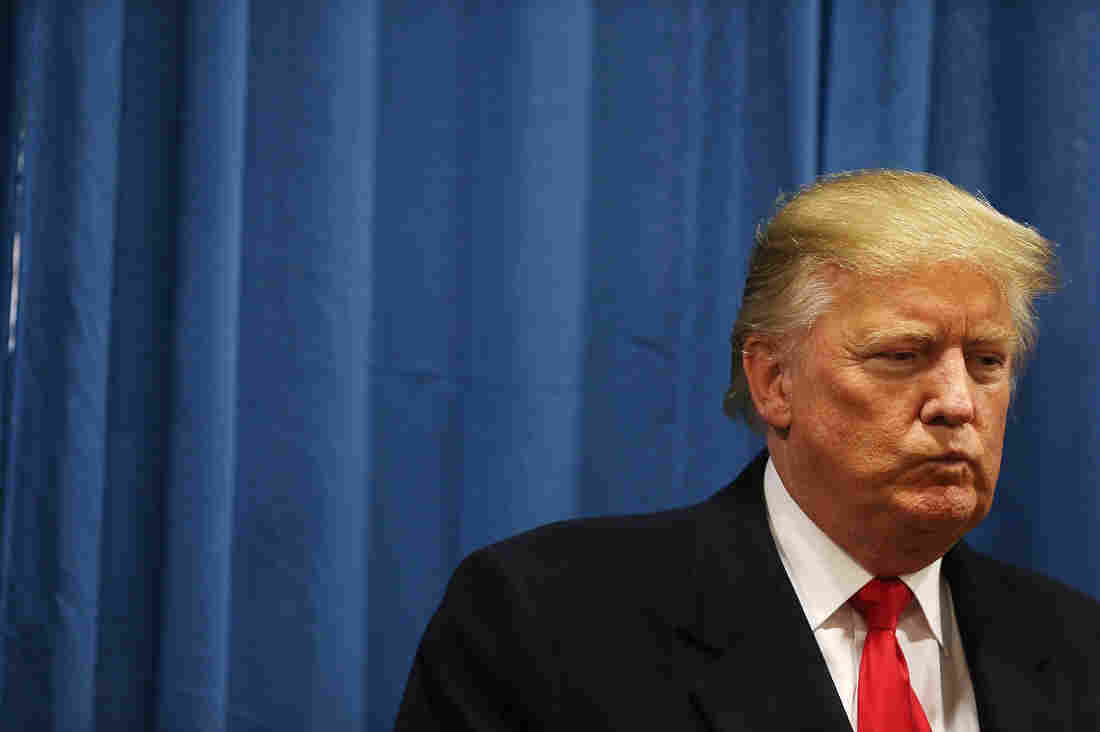 Donald Trump waits to be introduced during a campaign event at the University of Iowa this week. With just days to go before the Iowa caucuses, Trump withdrew from the final GOP debate. Joe Raedle/Getty Images hide caption 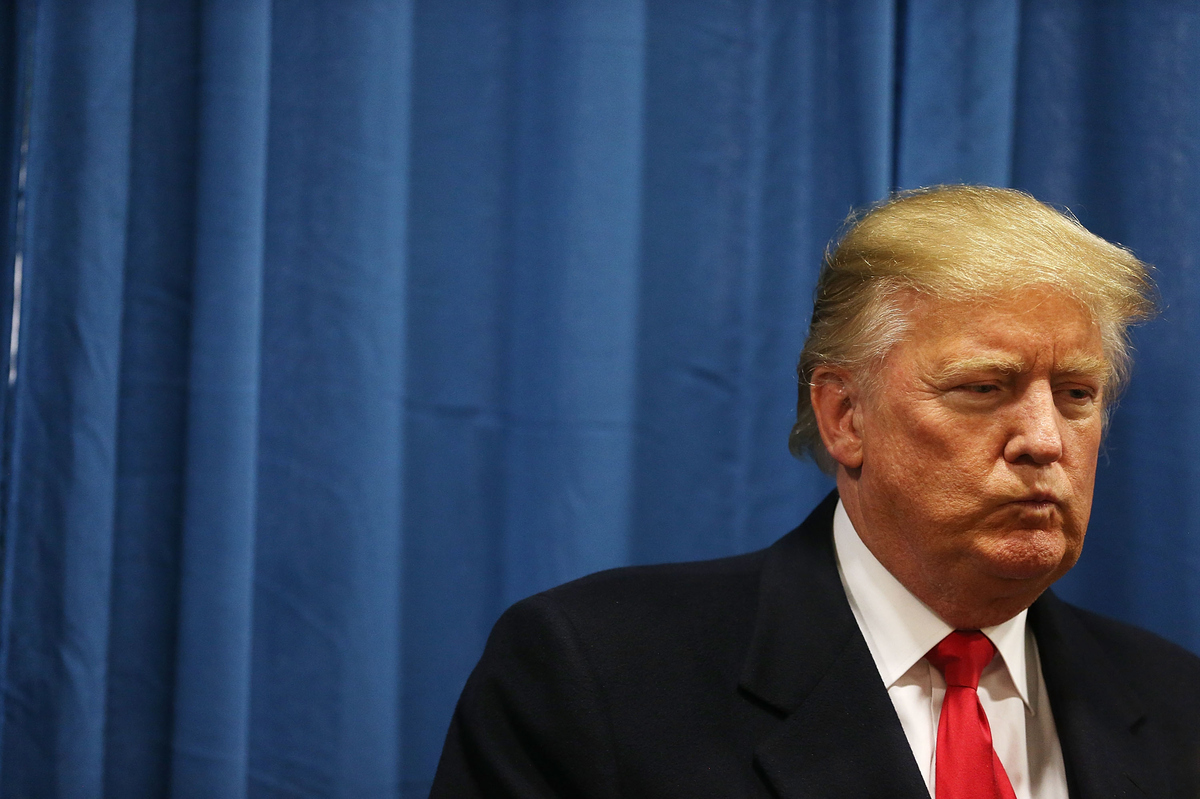 Donald Trump waits to be introduced during a campaign event at the University of Iowa this week. With just days to go before the Iowa caucuses, Trump withdrew from the final GOP debate.

Donald Trump said this week if he went out on Fifth Avenue in New York and shot someone, he probably wouldn't lose any votes.

He chose a pretty big someone — Fox News (whose offices are one block over from Fifth).

Tune in to Thursday night's Republican debate on Fox (9 p.m. EST) in Iowa, the last one before Monday's caucuses, and you'll notice one very big elephant not in the room — Trump. The man who helped Fox to a record 24 million viewers in the first primary debate of this campaign season won't be there.

He pulled out of the debate after getting into (what Trump-endorser Sarah Palin might call) a "squirmish" with Fox over its insistence on keeping anchor Megyn Kelly as a moderator. Trump thought Kelly treated him "unfairly" in the first debate. Fox didn't budge, and then mocked Trump, saying in a statement the network had "learned from a back channel" that Iran's and Russia's leaders were intent on treating Trump "unfairly" if he became president, and that Trump was planning on using "his Twitter followers to see if he should" go to Cabinet meetings.

That was enough for Trump. He bailed, but upped the showmanship. He's holding his own alternative event — at the same time and just 3 miles away — a benefit for veterans. So, while Fox News hosts its debate, every other cable news network — which won't have broadcasting rights to the debate — will probably be airing the Trump event.

No, this is not an "Ambien Dream," as Karl Zahn, a New Hampshire stand-up comic (and Trump supporter) wondered aloud to New Hampshire Public Radio's Josh Rogers this week of Trump's campaign.

This is very much real life. Here are some questions ahead of tonight's Split-Screen "Squirmish":

1. How much does Trump talk about the debate, Fox News and the GOP?

This isn't what the Republican Party wanted when it began sanctioning and limiting debates following the 2012 presidential election. And it certainly didn't expect a blow-up like this with Fox News, of all the networks. The Republican National Committee wanted to control the message and protect its candidates (and brand), but that hasn't worked out so well. Trump, as it turns out, has been a bigger force and commands a louder megaphone than anyone else in the party. Just how much will he use it Thursday night at his veterans event?

2. Who exactly will Trump's event benefit — and how much will be raised?

Charity events like this aren't exactly things that can be slapped together in 24 to 48 hours very efficiently. What will the energy be like? And who exactly will the money be going to? Trump has said maybe it should go to "Wounded Warriors" (the Wounded Warrior Project — the subject of controversy over its spending habits), but the press release just said a "Special Event to Benefit Veterans Organizations."

3. What about the debate — how much will Trump come up?

Trump won't even be at the debate, but he's already the dominant topic. There are two sides to this — the moderators and the candidates. You'd have to guess the moderators would have to say something about Trump's absence. (And no, there won't be an empty lectern, RNC spokesman Sean Spicer said on CNN Wednesday).

And certainly a few candidates would like a free shot at Trump, especially his closest rival, Ted Cruz. The Texas senator even challenged Trump to a debate at a college in western Iowa on Saturday evening. And you know what they say about candidates who are asking for debates. (Hint: It comes as Cruz's poll numbers are slipping in the Hawkeye State.) 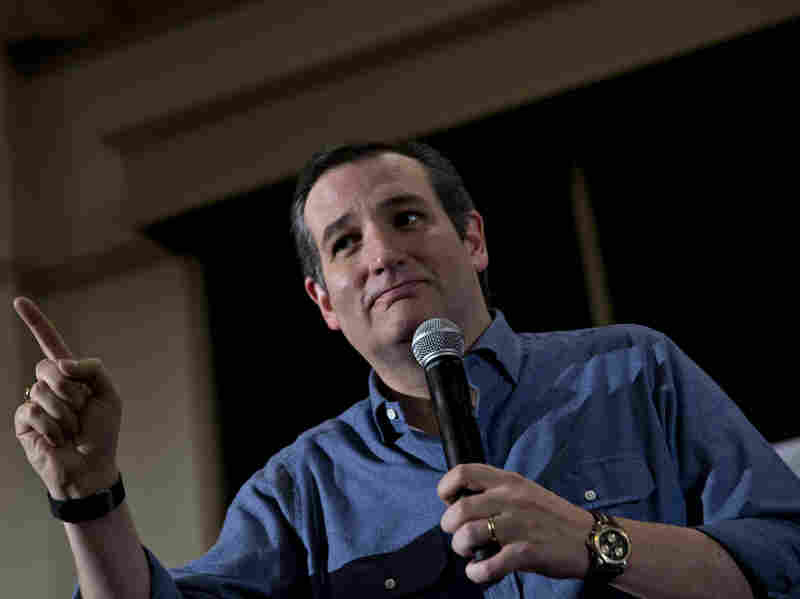 Sen. Ted Cruz, R-Texas, is banking on a win in Iowa. He needs a solid debate, but he was hoping to do it against his chief rival in Iowa, Donald Trump. Bloomberg/Bloomberg via Getty Images hide caption 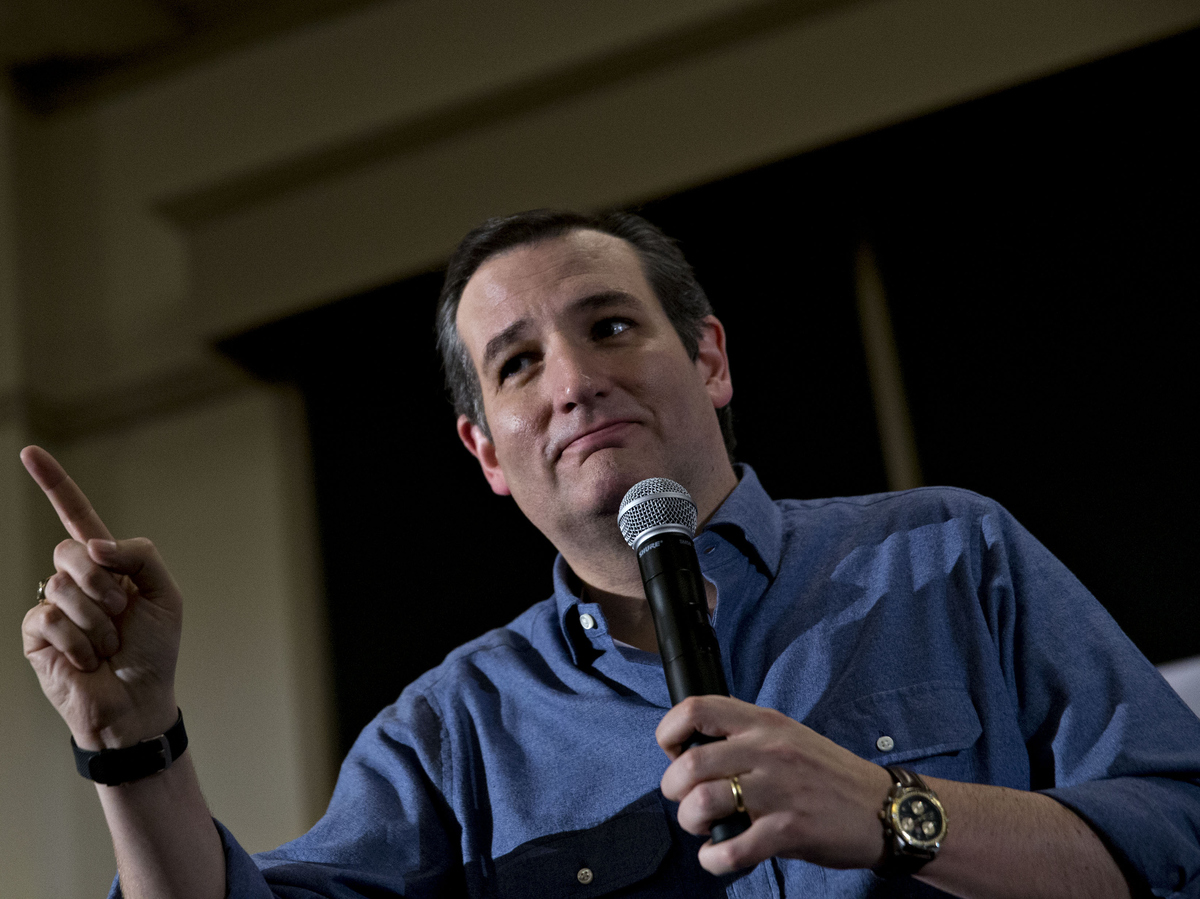 Sen. Ted Cruz, R-Texas, is banking on a win in Iowa. He needs a solid debate, but he was hoping to do it against his chief rival in Iowa, Donald Trump.

4. Who grabs the spotlight instead?

There are still lots of storylines to play out at this debate. Cruz will now be in the center of the stage, and that means he might be the one everyone winds up going after. In earlier debates, Cruz held back. In the last debate, he showed why he was a champion college debater. But who's his foil without Trump on the stage?

Others need to break through, too. Florida Sen. Marco Rubio has quietly remained in third in Iowa and in the top three in New Hampshire, but his path is still hard to see. Rubio has had plenty of differences on these stages with other candidates (Cruz, New Jersey Gov. Chris Christie and former Florida Gov. Jeb Bush, for example). Can he show why Democrats seem to fear a Rubio nomination more than any other candidate?

5. Can a mainstream, traditional, aka "establishment" Republican break through?

This has been an election dominated by the outsiders, thanks to more hard-line conservatives fed up with the system. In years past, the party has gotten that out of its system in Iowa and establishment picks have eventually emerged. This year is pointing in a different direction, but there are still others trying to be viable in that "establishment" lane:

-- Ohio Gov. John Kasich is the latest to have some momentum in New Hampshire. This debate may be in Iowa, but it's being broadcast to a national audience. And you can bet Kasich's target will be some 1,300 miles east. On caucus night, he'll already be in the Granite State, not Iowa.

-- Bush has been on his last legs for a while, but he was more relaxed in the last debate. He has certainly taken on Trump, and he'll likely do so again, even if Trump's not on the stage.

-- Christie had a solid performance in his last debate. He'll probably mix it up again.

6. Is Trump really the "Teflon Don" of this race?

There's some risk for Trump in not going to the debate. He can look presumptuous, entitled and untouchable. Maybe he really is the "Teflon Don" of this race. It's certainly not what a typical front-runner would do. That candidate would play it safe, have a good debate and position himself to win the first two contests.

But that's not Trump's style. He doesn't just play it big. He plays it HUGE. And that's what he's doing again. So, will Iowans feel snubbed? Or more precisely, will Iowans who have been supporting him to big numbers suddenly start to peel off? That's pretty unlikely. He can argue he's not snubbing Iowa; he's snubbing Fox, which in and of itself is pretty remarkable considering the role Fox plays in Republican politics and conservative circles.

Some candidate might figure out a way to use Trump's absence as an opportunity. But the likelihood, again, is Trump will spin this into a win, as the other candidates are forced to participate in a game without the star player whom everyone came to see.