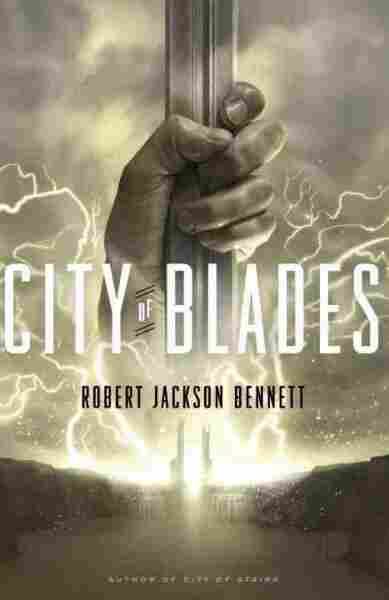 Imagine if you could kill God. Literally just roll right up on him and shoot him in the face.

Now imagine that it's gods, plural. And while putting them down isn't by any means easy, it is possible. You can kill them. All of them. And free the world from their dominion, their miracles, their slavery and oppression. Kill the gods and the world is re-set, sans divinity, sans magic. The playing field, once mountainous with privilege and lack, is now level. Just so long as those gods stay dead.

This is the world of Robert Jackson Bennett's Divine Cities series. The first book, City Of Stairs, came out last year and was a dense readfull of worldbuilding and mythology, long, explain-y passages and expositionbut also had assassinations, an airship battle, and a couple of great characters (Shara, a spy, and Sigrud, her giant one-eyed bodyguard) who kept things jumping even through those sections where Bennett went deep into the bloody, weird and imaginary history of his make-believe world. City Of Stairs worked, primarily, for one big reason: The world Bennett had created was just awesome. You could hear it and feel it and taste it on your tongue, and as a reader, you found yourself invested in what happened next in a way that's rare in all but the best epic fantasy.

City Of Blades is the second book in the cycle, and in it, Bennett does something stupid and brave.

Actually, he does several stupid and brave things, but they all sort of add up to one: He takes the things that people loved about City Of Stairs and changes pretty much all of them. Rather than the decimated capital city of Bulikov, he moves the action to far-flung Voortyashtana, a haunted, tumble-down port city once the home of the god of war and death, now a blasted, isolated ruin under military occupation and torn by ritual murders and guerilla insurgencies.

For those of you who loved Shara and Sigrud, sorry. He lets go of them (though not, it's important to say, completely) and pulls up a supporting character from Stairs to be his new protagonist. Now granted, Turyin Mulaghesh was a pretty solid extra in the first book (a foul-mouthed, ass-kicking, uncompromising soldier in the mold of every cigar-smoking battlefield sergeant ever committed to page or screen), but that's still a ballsy move when the mains from book 1 were so well-liked.

Plus, he bumps the timeline forward by a couple decades, which essentially means that everyone has grown old in the interim. Shara is now the Prime Minister. The Voortyashtan harbor is being dredged in a massive civil engineering project that is led by Sigrud's highly technological daughter, Signe. And his narrator (now General Mulaghesh, uncomfortably retired, but called back to action for that perennial One Last Job) is a middle-aged woman, an angry drunk, a veteran disabled by the loss of one hand and coming to painful terms with all the bodies and blood she's left in her wake.

Kill the gods and what happens next? When men and women are simply left with the world as it is, with no miracles to sustain them, what does the world become?

We meet her in her retirementa lame-duck officer just trying to run out the time on her pension. At Shara's request, she goes to Voortyashtan, under cover, to investigate the disappearance of another officer. There are murders and assassinations, and a dead god of death and war who maybe isn't quite so dead as everyone thinks.

One of Bennett's oddest talents is for building reality through politics, infrastructure and the minutiae of what amount to rather violent city council meetings. He experimented with it (not entirely successfully) in Stairs. Here, he does it better, and links it more subtly and neatly to a single defining question that underpins his stories of soldiers and spies: Kill the gods and what happens next? When men and women are simply left with the world as it is, with no miracles to sustain them, what does the world become?

Unlike Stairs, this book doesn't drag; doesn't bow under the weight of exposition. It feels no less rich, no less realized, but just ... streamlined. Blades is being pitched as both a sequel and a stand-alone volume, and this is one of those rare cases where both of those things are true. And I would actually suggest that Blades is the better entry point into the seriesread this one first and then, if you fall just as hard for the world as I have, go back and read Stairs to get your fill of all the strangeness and wonderment of the world in the days when the gods still walked tall upon it.