Accessibility links
Family Is Tyranny Writ Small In 'Kookooland' Gloria Norris' wrenching, darkly funny memoir of her abusive father has strong parallels to accounts of life in the Soviet Union. How do you respond to tyranny? What would it cost you to rebel? 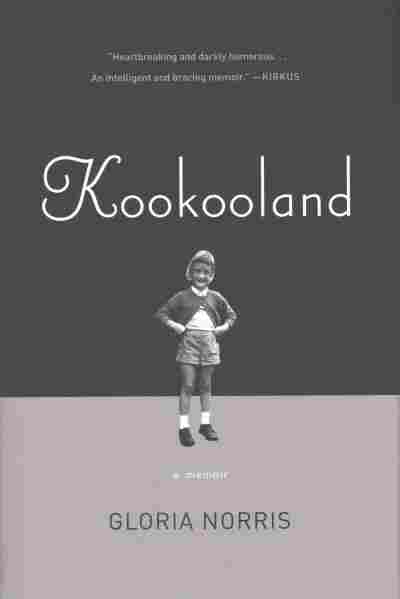 Editor's note: This review contains a word some readers may find offensive

"I'm sorry," was the first thing Gloria Norris' mother said to her father when he came into the hospital room after the baby was born. "I'm sorry it wasn't a boy."

Girls, Gloria soon learns from her father, are weak. Whores, usually. Too weak and untrustworthy to drive, which is why Jimmy doesn't let his wife learn how.

Intimations of horror come early in Kookooland, Gloria Norris' eerie and vivid memoir: a slasher movie Jimmy forces the kids to watch at the drive in, the crust of animal blood in the back of Jimmy's truck, and jokes about killing people that somehow don't feel like jokes — especially after Jimmy's friend Hank murders his ex-wife, Doris. Doris tried to escape, move to Kookooland — what Jimmy calls California. She deserved it, Jimmy says: "A man's wife embarrasses him, she pays the price. Sayonara, baby."

Shirley, Gloria's mother, is terrified of Jimmy. She pleads and placates, trying not to end up like Doris. Witnessing a fight between her parents, Gloria writes: "Then he turned on me. You're always starting something. Always turning your mother against me. His eyes were like two mad hornets. I stood there, stung. Shirley plastered on a smile thick as calamine lotion. Everything's fine, she cooed. Nobody was turned against anybody. Everybody loves everybody in this house. Then she offered to cook Jimmy a steak, nice and bloody."

As in a tyranny, in an abusive family you either find small ways to dissent, or you rebel and perish, or you decide to survive at all costs. It's the calculus of abuse: What it would cost you to disagree out loud?

Kookooland is set in the projects of Manchester, N.H. Norris evokes a world of race tracks and drive-ins, con men, rat hunts at the dump, and the Merrimack, the river that "sliced through Manchester like a wet, oily knife." She longs to get out, to be like Susan, Hank's beautiful daughter who went to school to be a doctor. But after her father murders her mother, Susan is drawn back into the cycle of bloodshed, and ultimately can't escape it. Like a disease, violence is in the blood.

Aristotle says that the family is the basic model for the state: a mini kingdom where father rules, either benevolently or not so much. That's how you can end up living in a reign of terror in a free country. "The king's the king," Jimmy says. "The king's always right — even when he's wrong." The resemblance to memoirs of political repression is strong. Kookooland is reminiscent of books like Eugenia Ginzburg's Journey into the Whirlwind, about her imprisonment in the Soviet Union: "[H]ow relative are all human systems and ideologies," she writes, "and how absolute the tortures which human beings inflict on one another." Jimmy believes America is a police state and "Big Brother [is] breathing down our frickin' necks." And yet, he creates a small police state in his own home.

Whatever you choose — speech or silence, rebellion or submission — the result, of course, is the same: a neverending fear, a lifelong voice in your head. Even if you survive, you don't. "I couldn't beat him," Gloria writes. "He was bigger, stronger, faster, meaner. He could charm a bird off a tree. And if not, he could shoot it off."

Jimmy's absolute psychological power is evident in the way the young Gloria uses her father's words, how his language lodges, unshakably, in her brain. "After all," Gloria explains, "little fights were something husbands and wives had all the time, especially when one thought the other was cheating or when somebody was spending too much dough or when the husband's hamburger was burnt black as a n***** and not all nice and bloody." You can hear in her words her mother's propitiation ("little fights") and her father's vitriol.

As she grows up and breaks free, her words do too: "I tried to carve Jimmy out of my noggin — I mean, brain." She loses the goddamns and dummkopfs and the slurs, moves out, goes to college, and finally finds her own vocabulary of liberation: at the end of Kookooland, the words are gloriously her own — mostly. The past is still there. Even from the grave, Jimmy is a ventriloquist: "Sometimes I can't help it. I still call it KooKooLand."