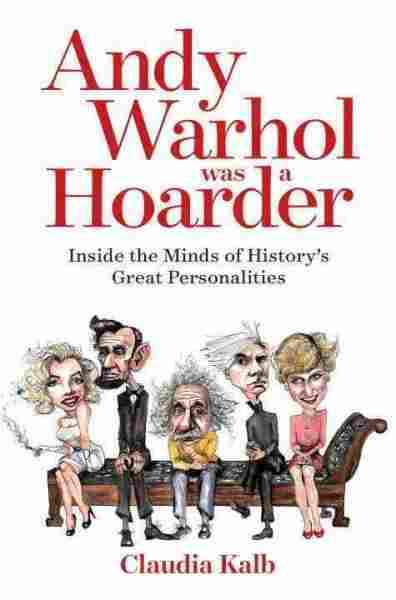 Andy Warhol Was a Hoarder

Inside the Minds of History's Great Personalities

Was Andy Warhol a collector of beautiful and mundane things, or was he a full-blown hoarder? Did Abraham Lincoln suffer from melancholia, or was he clinically depressed? Did Albert Einstein have autism? These are the questions journalist Claudia Kalb seeks to answer in her new book, Andy Warhol Was A Hoarder: Inside The Minds Of History's Great Personalities.

Kalb tells NPR's Rachel Martin how she went about diagnosing the historic figures she talks about in her book.

On what makes her believe Andy Warhol was a hoarder

Warhol had this intense desire to shop and collect. And it started fairly early in his life and as he moved to New York and became a working artist in the city, he would shop daily at everywhere from a five-and-dime store to an upscale boutique. The other big thing about Warhol was his time capsules, where he had about 600 boxes, cardboard boxes, where he put everything into them. He swept stuff off his desk. He put old receipts, he put bills he had not yet paid, he put junk mail, even [an] old pizza crust — threw it into these boxes. ... [He] put dates on them. He anticipated at some point potentially selling them. He thought maybe these would be sort of a collection of artifacts that people would be interested in. After all, it's Warhol.

At the same time, he had such a difficulty getting rid of anything. He said in his journals and in his writings, "I can't throw anything out." And he even said, "I'd love to have a really clean space." But he never could do it.

It was a wonderful task of looking both at biographical material as well as medical journals. So for Darwin, for example, his letters and journals are online. It's an amazing resource. ... You can look at what he was writing, what he was saying, how he was expressing his anxiety and the physical symptoms he suffered.

And then at the same time, looking at the medical literature that has been published. There are hundreds of studies about what ailed Darwin. What was wrong with him? Why did he have these stomach aches, this dizziness, these headaches? ... And then the third component was interviewing current-day mental health experts to talk to them about these conditions and to assess how the symptoms of these particular historical figures lined up with current-day diagnoses.

I think ultimately, while writing it and thinking about it and talking about it, my overarching goal was to lay this all out for people in a way that they could look at it and say, "This looks like my friend, or my family member or a little bit like me." ... My goal, I hope, is that by reading about these people, there'll be some less stigmatization of mental health disorders. We all struggle with all sorts ... of things in our mind[s]. I found this a way to maybe relieve people a little bit — that if they are struggling, they are not alone.