Accessibility links
What Young Republicans Have To Say About Their Party's Candidates As the presidential primaries kick off, Rachel Martin speaks with three young Republicans about what they want from the candidates in this election and for their party in the future. 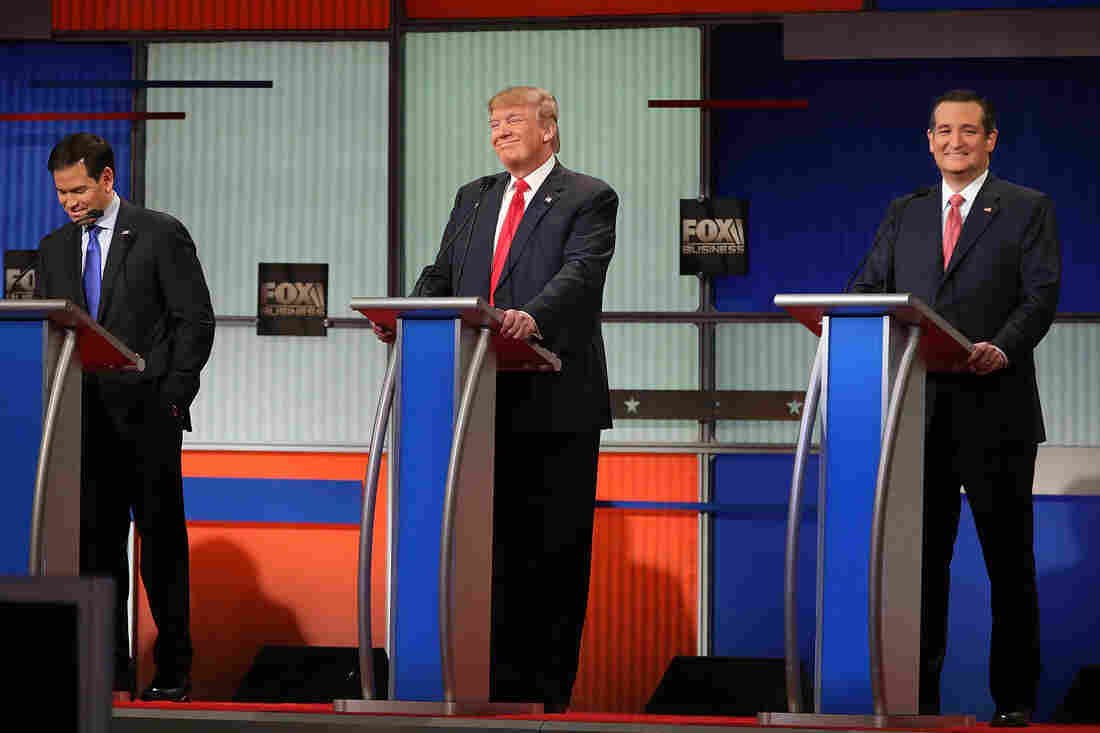 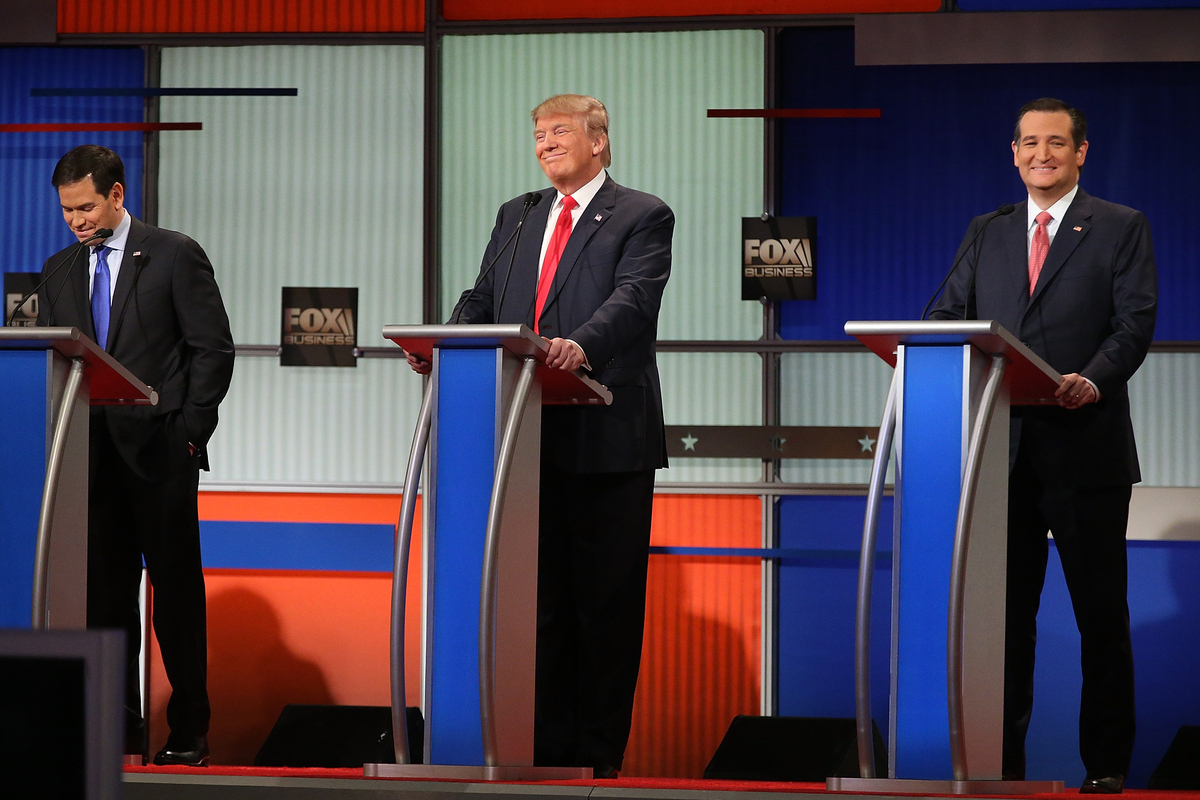 Monday's Iowa caucuses are being billed, as they are every election season, as "a fight for the soul of the Party," both Democratic and Republican.

Yes, it's a worn-out cliché, but especially on the Republican side this year, it's a real battle.

For some insight into the race and the state of the GOP, we've turned to some young Republicans: Chelsi Henry, 27, was the youngest elected woman in the history of Jacksonville, Fla. Will Estrada, 32, works as an advocate for a home-schooling nonprofit in Northern Virginia. And Margaret Hoover, 38, is a political strategist and author whose great-grandfather was President Herbert Hoover.

We started with the man who's grown to dominate the GOP.

Will Estrada: Donald Trump talks a good talk but when you look at where he stands on, there's nothing to base it on. While I like that he's talking a conservative talk, I prefer candidates who have a background in it — there's evidence that you can look back and say they've fought, they've been in the trenches, they're trying to lower our taxes, reduce the size of the federal government rather than just say the right things. But he talks as a conservative and so you have the top two candidates in the polls both making a very strong push for the conservative movement as opposed to the establishment movement.

I actually must say, I'm very optimistic. As a young Republican, I think tomorrow Ted Cruz is gonna win Iowa. I think it's gonna basically deflate Donald Trump and I think this race – my crystal ball is a little foggy but I think it's gonna come down to the two Cubans, Ted Cruz and Marco Rubio, and I think one of them will be our nominee this summer. And as a young, Latino conservative, I'm very, very excited about that.

How Do Voters Really Feel This Election? We Asked

Chelsi Henry: I think that Will made a great point in terms of Mr. Trump is and I think about this all the time, where does he really stand. I mean, he was a Democrat, now he's a Republican – which, that happens, but I think there's been many things that he's flip-flopped on and so I really wanna see someone who's gonna go in, stand to their platform, stand to their promises and most importantly stand to their values and implement those for all Americans. ...

Margaret Hoover: I would say I was optimistic before Donald Trump got in. now that Trump's gotten in, and it is just Trump versus Cruz, the narrative, the tone, the quality of the conversations – we're not talking about policy, we're not talking about how to do the kinds of things that people like Paul Ryan are talking about: how to alleviate poverty, how is the Republican Party, the conservative movement going to make America better, fix sort of this economic stagnation that the middle class have been in for a decade or more? We're not talking about any of the real problems. This has just become a reality TV food fight that frankly, not only is not good for the country, it's really terrible for the Republican Party as well. So quite frankly, I'm hesitant to say, it's quite terrifying as a young Republican.

RM: Why is Donald Trump leading in the polls so dramatically then?

CH: He's the one that's saying, no more political correctness, I'm going to say what's on my mind, I'm a person just like you, I have these really strong feelings, that sometimes, those who are trying to be politically correct don't share. So I think just his style has allowed people to feel like, "Oh my gosh, we can take back control, of the government." But it doesn't address the policy concerns, that myself as a young African-American attorney, activist feels needs to be addressed.

MH: It's more than that though Chelsi ... We talk about and you're talking about the fight for the soul of the Republican Party. This is also the fight for the soul of the conservative movement in many ways because the conservative movement has counted on many of these individuals who are finding affinity with Trump. And you see National Review, the really primary publication of the really modern American conservative movement, coming out against Trump. But many of their readers are angry. Many of FOX News viewers are angry. They support Donald Trump. And what he's tapped into is an economic populism and what I think is really more of a European style xenophobic nationalism that is a very, very strong feeling out there and he's riding that wave.

RM: What do you think about the rhetoric surrounding immigration policies and the influx of Syrian refugees and some of the language and rhetoric that's been used by Ted Cruz and Donald Trump?

WE: As an evangelical Christian, we see in the bible that we're all created equal in the image of God and a lot of the rhetoric that is used in modern American politics detracts from that. We need to be caring for the poor and the vulnerable. ... But having said that it also starts with we've got to protect our citizens, we've got to protect men, women, children here in America. And I'm very concerned, Rachel, and I think a lot of Americans are concerned when we see young men of military age coming over from war-torn countries, who we don't know and we can't verify. I always think, what would happen – that movie Red Dawn that came out in the 80s – what would happen if our country were attacked? Would we be fleeing or would we be fighting for our country?

RM: But Red Dawn is a fictionalized account that stirs up fear and paranoia.

I'd like for us to be a Party that's known for standing what we are for — not what we're against.

WE: It also, though, kind of strikes to the soul of what we've always said in America — that we will fight for our land. And I think a lot of Americans, myself included, are saying we should let the women and children in. But why are letting in people who should be fighting for their own country, frankly.

RM: Margaret, you've done a lot of work as an advocate for same sex marriage, worked to get pro-LGBT republicans elected to Congress. This is obviously still a very divisive issue in the GOP. Who's your candidate if that's an issue that's important to you, how does that weigh into your calculus when looking at the field?

MH: I believe that better government is less government. I also believe in equal opportunity as every American does. But I think that where we come down differently in terms of the political spectrum is, on the right we tend to think that the government's job is to stay out of the way and at the very minimum, enforce a level playing field to make sure that everybody does actually get a fair shot. And LGBT rights and freedoms is one area where government very clearly isn't giving Americans a fair shot because LGBT Americans don't have the same rights, they don't have all the same freedoms. Even post marriage, there are 30 states where you can just be fired for being gay, at cause. Nobody knows this. Republicans especially don't realize this. But there are Republicans who have taken strong positions on LGBT freedom. ...

I thought it was a great moment in one of the first debates where John Kasich came out and said I've been to a gay wedding and I was for traditional marriage but I went to a gay wedding and it reflected that people are open to changing and the Party isn't a Party of bigots. I mean, that has been the false caricature, I think.

RM: Explain what change, if any, you'd like to see in the GOP in the next few years?

WE: I would love to see us talking more about policy. We do a good job about it but we need to do it more. And I think it gets to what Chelsi said of reaching out into minority communities. They want strong families; they're pro-life, many of them in the Latino community. Many of the Islamic-American communities are again of a very strong, civil society and faith. And we need to go out and talk with them, we need to say the conservative, Republican message is one that empowers you — one that will protect you and your faith and your religious freedom and your family and your job and we need to go into these communities and just say you should be a Republican, you should vote with us because of these big policy issues.

CH: One, I think that we should hold true to our values and our principles. I am a Republican because of the values and principles of the Party align with my personal values. Yet, with that, I think that we have to be better messengers to all communities. We have to be better messengers of how our conservative policies will directly affect the lives of people when they're sitting down sat their kitchen table every month to pay bills, how it's going to affect their bottom line. And from that, I think we also have to grow in our diversity. So, my hope's, being optimistic because I happen to be a conservative, is that in 10 years we'll look around and those who are helping make decisions, those who are helping candidates get elected, they will be a diverse group of people who represent the demographics of America.

MH: I'd like for us to be a Party that's known for standing what we are for — not what we're against. And this is I think what Paul Ryan and the speakership is trying to do, is set an agenda of what we're for so the country knows that the Republican Party is for. Nikki Haley is trying to do this too. We are for a stable Middle East, we are for a free-market health care system, we are for social mobility and getting people out of poverty. And people will know how we're for those things. And I think as young Republicans, the principles are there, but we need to adjust them and message them in order to really connect to a new generation.