Accessibility links
In Iowa, Campaign Season Finds Muslims Caught In A Harsh Spotlight Many of Cedar Rapids' Muslims have long roots in the U.S. Yet the political climate there has them feeling out of place. "I just want to live my life without having to explain myself," says one imam. 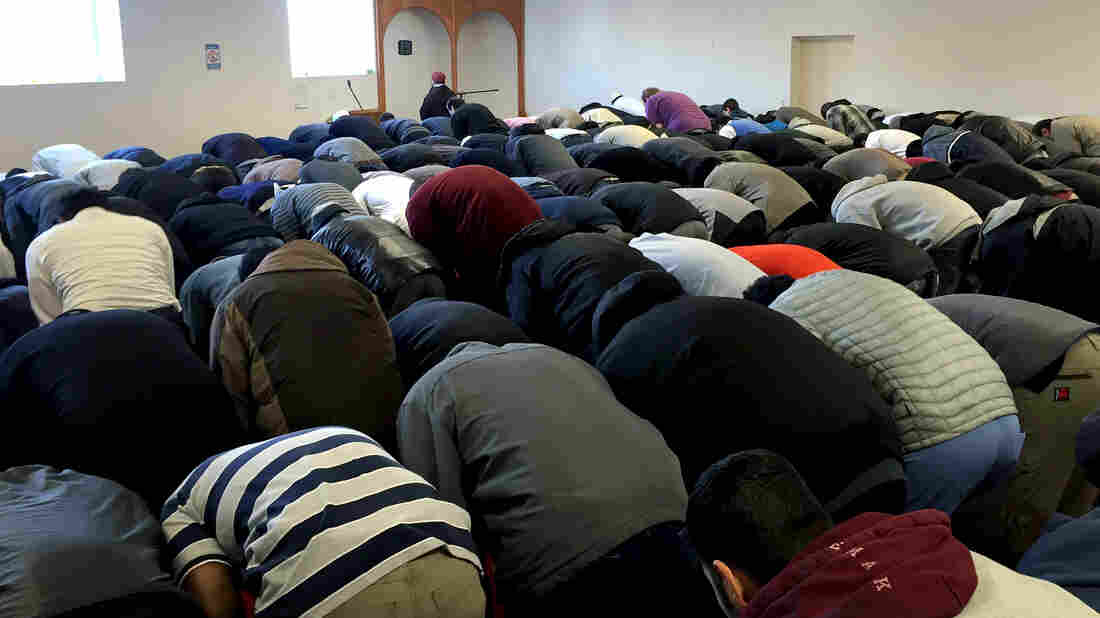 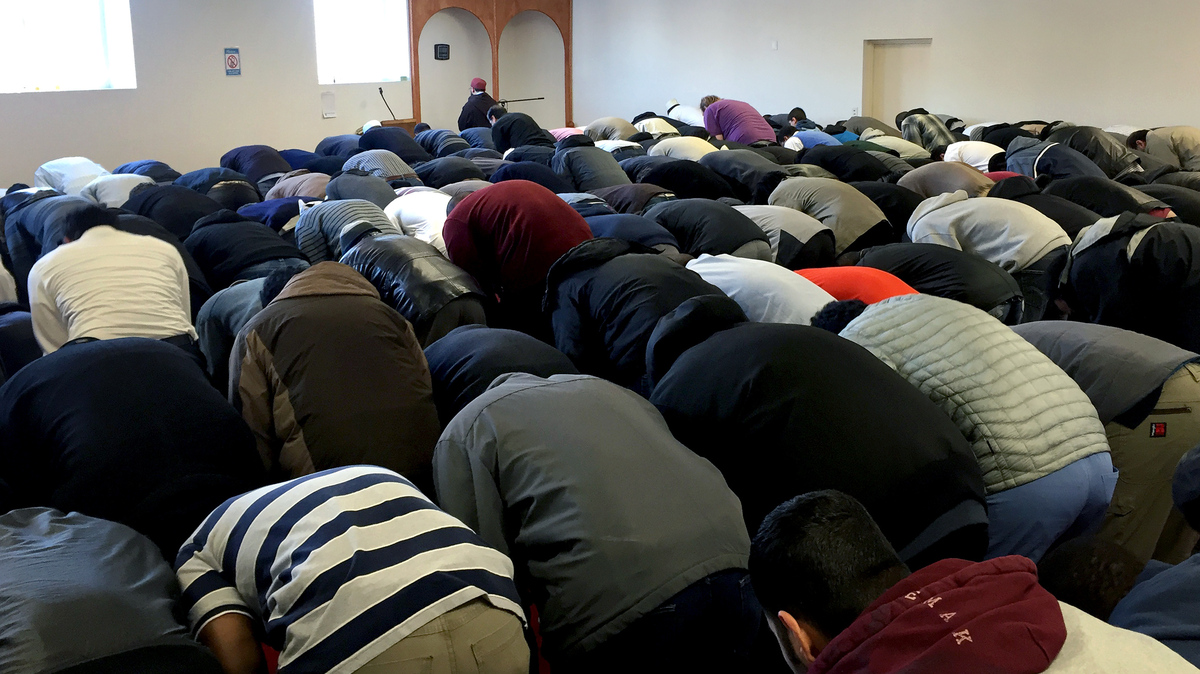 Worshippers bend in prayer at the Islamic Center of Cedar Rapids.

It's noon at the Islamic Center of Cedar Rapids. Dozens of worshippers stream up the front walk, past children from the center's preschool playing in the snow, heading in through doors under a blue-and-white minaret to attend Friday prayers.

Inside, after the call to prayer, the center's imam, 28-year-old Hassan Selim, rises before the congregation to give his sermon.

Amid a political climate in which presidential candidate Donald Trump has said Muslims should be temporarily barred from entering the country, Selim offers some sobering advice to a group who have gathered for worship: 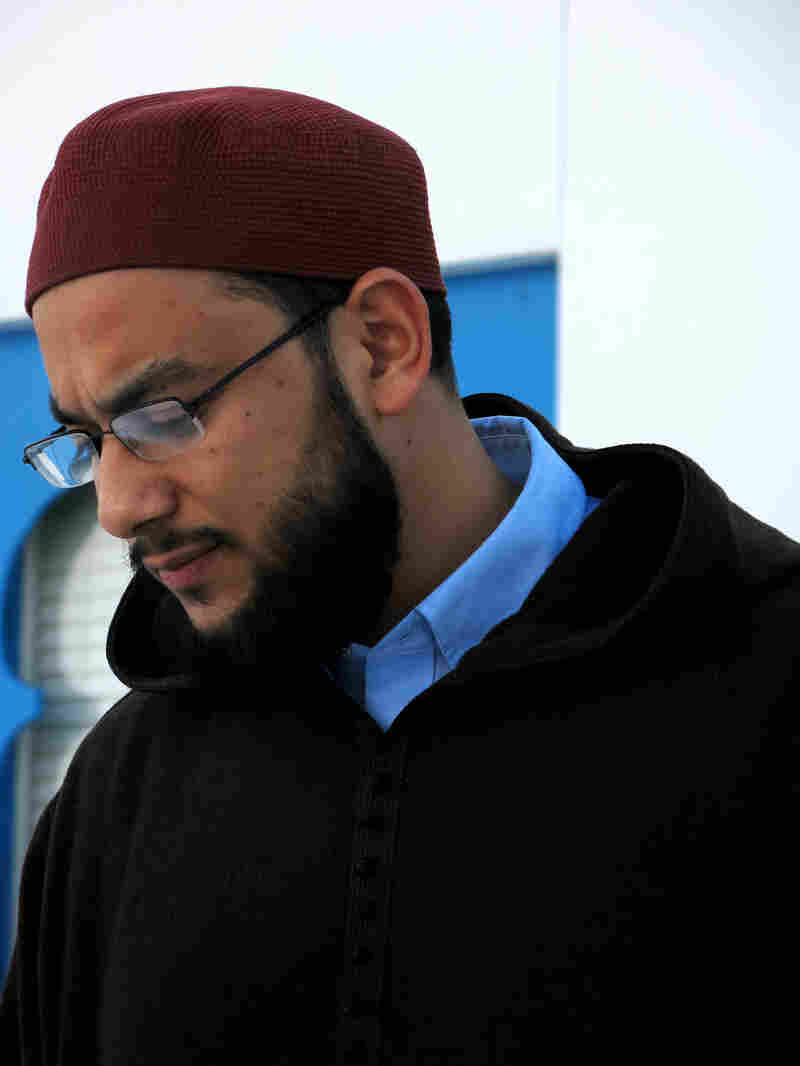 Imam Hassan Selim of the Islamic Center of Cedar Rapids. Though he's originally from Egypt, he's been here for years with his wife, a Cedar Rapids native. Claudine Ebeid/NPR hide caption 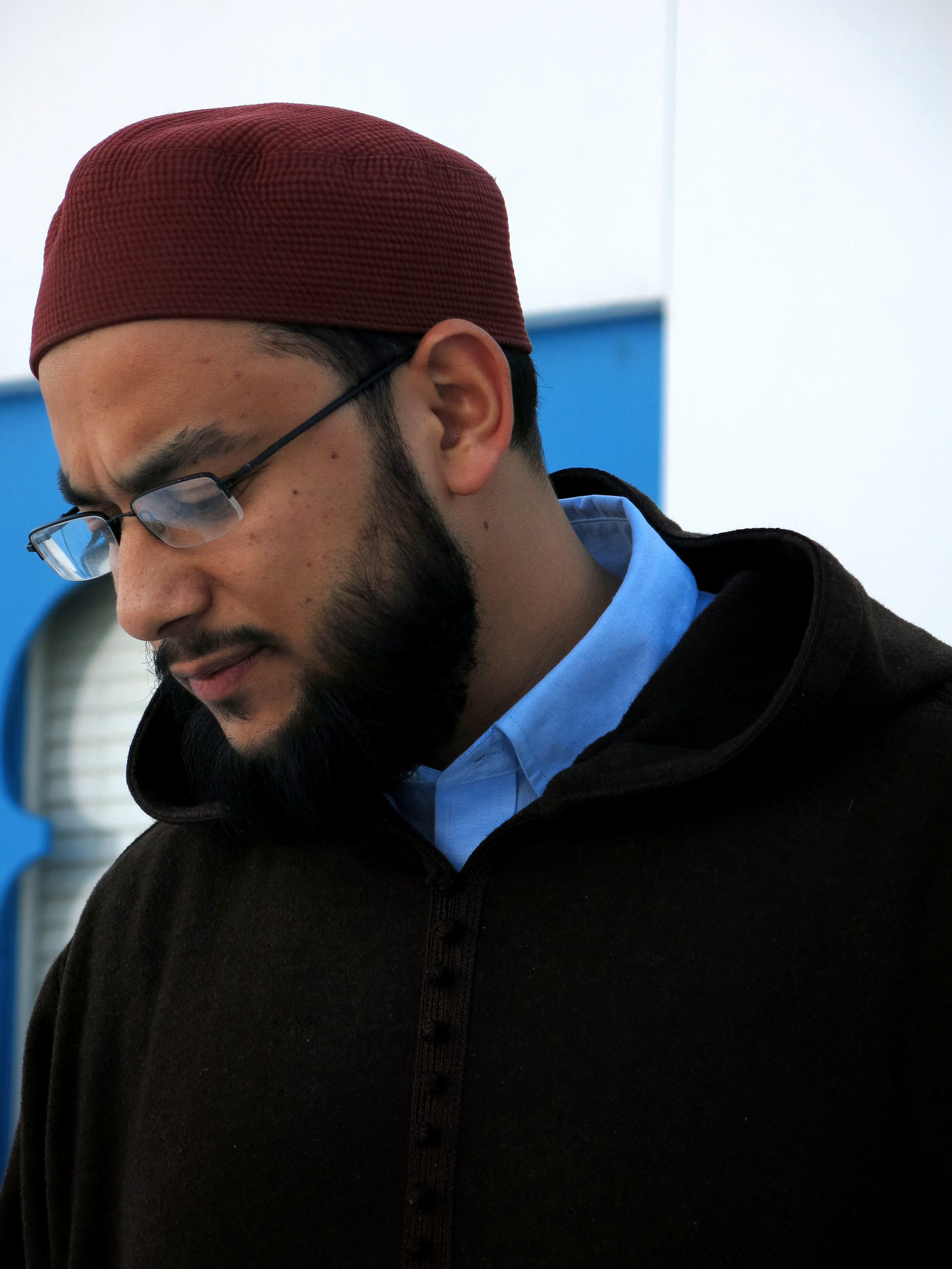 Imam Hassan Selim of the Islamic Center of Cedar Rapids. Though he's originally from Egypt, he's been here for years with his wife, a Cedar Rapids native.

"Now, for us as Muslims, we have to be careful about traveling, especially if we are on a flight," he says. "You raise your hand and you start mumbling and using words in Arabic, people around you don't understand what you're saying. They hear you saying the word 'Allah,' they freak out and they get scared."

Instead, he suggests keeping those prayers internal: "Allah can always hear you," he says.

After prayers, Selim explains why he chose that message: "We've heard things in the past couple weeks about people saying things on airplanes, telling Muslims they don't feel comfortable having them sitting next to them or saying, 'We don't feel safe having this lady with her headscarf in the same airplane.' Things like this are the kind of things I worry about."

The crowd of about 120 people who filled the prayer hall are from diverse backgrounds. They include new immigrants from countries like Somalia and Sudan, but there are many whose roots in Iowa date back to the late 19th century, when their forebears immigrated from Syria and Lebanon.

This is one of the oldest Muslim communities in the U.S. Its original prayer hall, the Mother Mosque of America, built in 1934, is the oldest mosque in the country. It's still used as a cultural center and museum.

Paul Habhab's family are longtime members of the center. His ancestors immigrated from Syria in 1888 — just three years after Donald Trump's grandfather arrived from Germany — and he grew up in Iowa. The idea of Islamophobia isn't new to him. 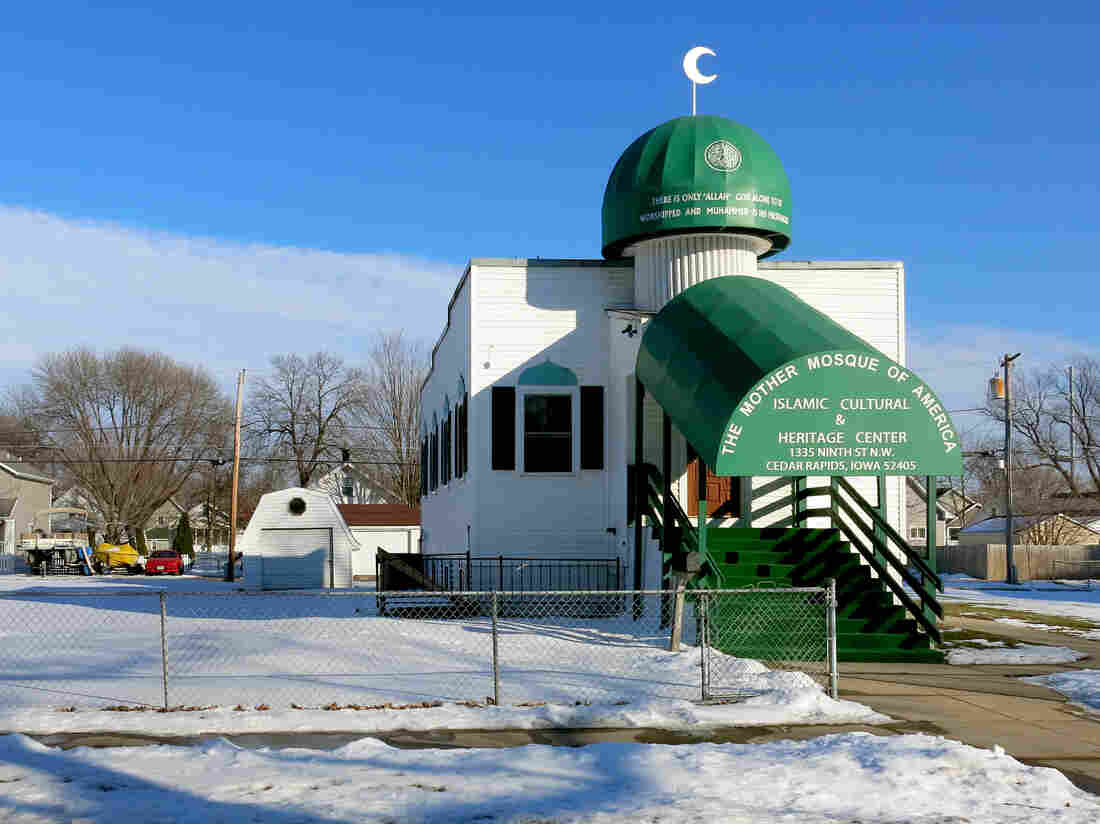 The Mother Mosque of America was built in 1934, making it the oldest standing mosque in the country. Now a historic landmark, these days it serves primarily as a cultural center and museum. Claudine Ebeid/NPR hide caption 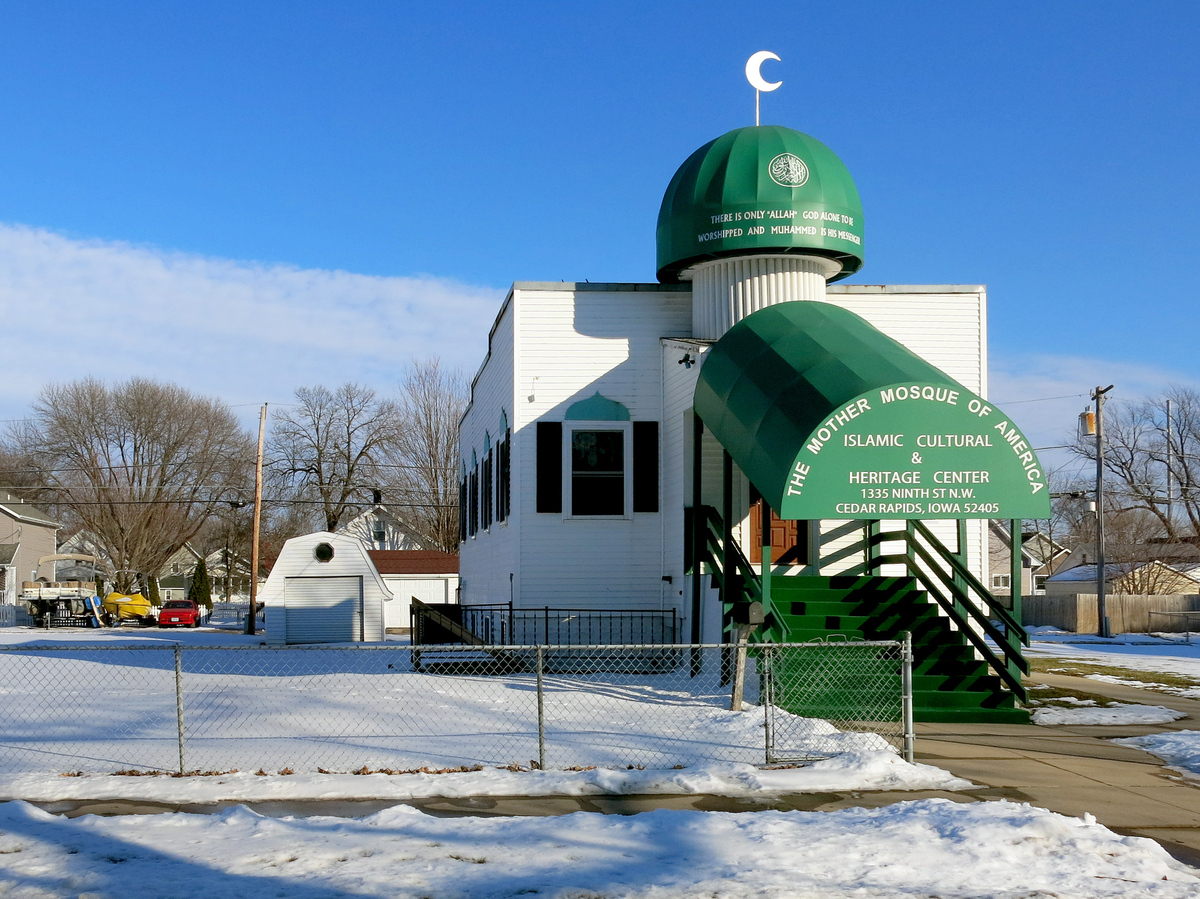 The Mother Mosque of America was built in 1934, making it the oldest standing mosque in the country. Now a historic landmark, these days it serves primarily as a cultural center and museum.

"I remember being called [Moammar] Gadhafi's son and a towelhead as a kid," he says, adding that he thinks this will pass. "It isn't about religion; it's about politics."

But this is something new for Imam Selim. Originally from Egypt, he became a U.S. citizen after moving here with his wife, a native of Cedar Rapids, back in 2012.

"Only in the last two or three months did I start to feel uncomfortable," he says. "I would like to just point at one person ... but it's a narrative. And everyone is picking on this narrative, everyone is using it for their political reasons."

In his office, his desk is covered in letters received recently, from churches offering their support. He reads from one, sent by a church in Iowa.

"At this time of unrest and suspiciousness towards Muslims, by various groups in the U.S., we would like to express our support and friendship to you," he reads.

When Selim's done, he adds: "That's what keeps us going."

These days, Selim spends a lot of his time doing community outreach at churches, universities and libraries. He explains his faith, his concerns, how he lives his life. He says it does have an impact.

"People start saying, 'Oh, OK, so you are just a normal guy who has two daughters and cares about their education and you care about your paycheck and taxes.' "

But, he says, "It's so exhausting, because you do this all the time, you know. You come to a point where you say, 'I just want to live my life without having to explain myself. I want to go out there and have normal conversations with people.' I go to a restaurant with my family, and people are all of a sudden alert because my wife has a headscarf or because I call my child a Muslim name. It's very exhausting for everyone."

He says the current atmosphere makes it difficult to engage his congregation, too.

You come to a point where you say, 'I just want to live my life without having to explain myself.'

"I have to tell these people, 'Go outside and do this and do that and take care of the environment and volunteer in the library and do good work,' " he says. "And they're like, 'But people already look at us as dangerous people, as foreigners, and I don't feel comfortable taking my family to the public library and having everyone looking at us as terrorists.' "

Asked about the current climate for Muslims in the U.S., he shrugs his shoulders and shakes his head.

Then he stops, pausing for 10 seconds before continuing.