Accessibility links
Is Amazon Planning Hundreds Of Bookstores? Analysts Doubt It A mall real estate executive let slip that Amazon plans to build up to 400 walk-in stores. Analysts were skeptical, and now the executive says his comment wasn't intended to represent Amazon's plans. 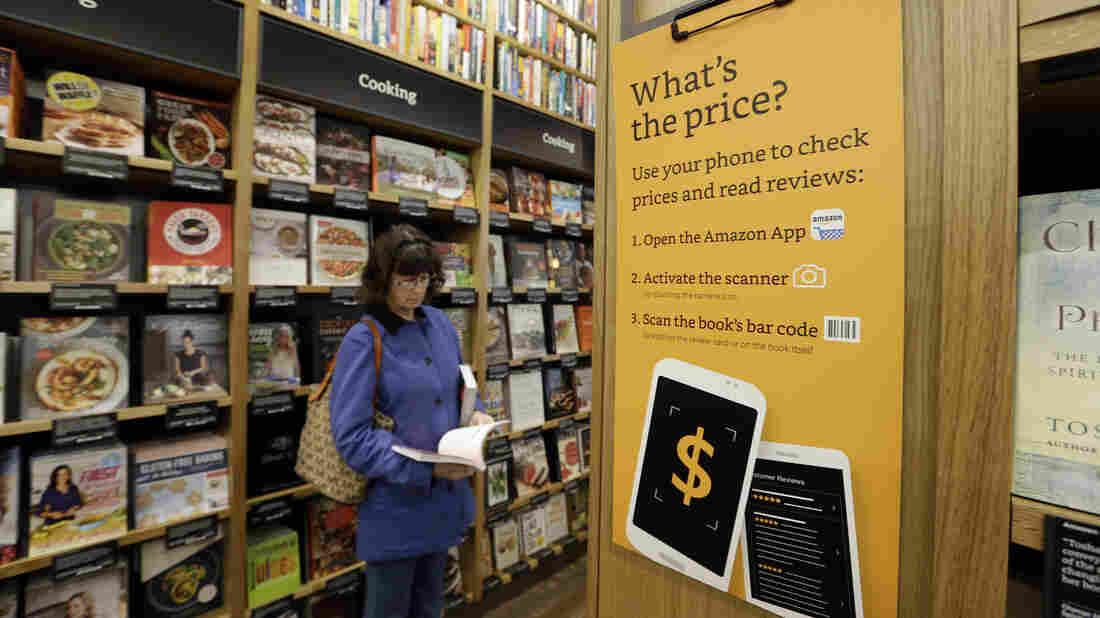 A customer looks at a book at Amazon Books, the first brick-and-mortar retail store for the online retail giant, on Nov. 3 in Seattle. Elaine Thompson/AP hide caption 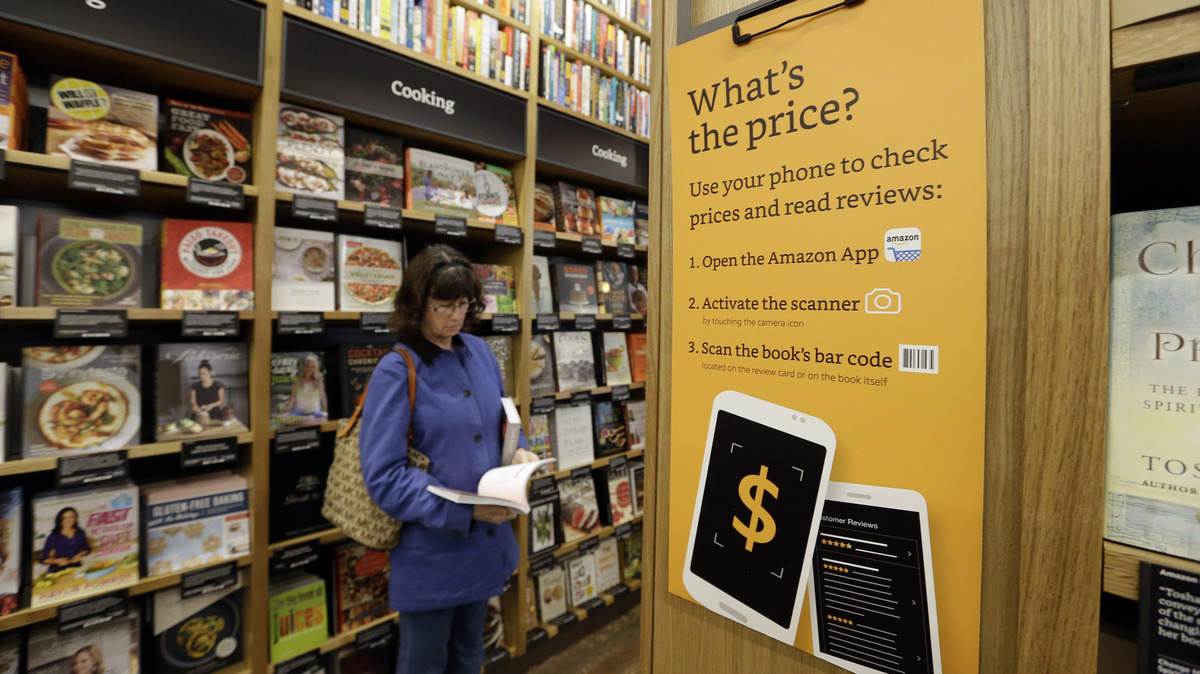 A customer looks at a book at Amazon Books, the first brick-and-mortar retail store for the online retail giant, on Nov. 3 in Seattle.

Last November, Amazon did the unthinkable for an online retailer known for undercutting brick-and-mortar bookstores: It opened a walk-in store in Seattle. Now, there's talk that Amazon plans hundreds of them.

On an investor call Tuesday, Sandeep Mathrani, CEO of mall operator General Growth Properties, said: "You've got Amazon opening bricks and mortar bookstores, and their goal is to open, as I understand, 300 to 400 bookstores."

The point Mathrani was making was that retailers that started off online — like Bonobos and Warby Parker — are now increasingly in the market for physical locations. But his seemingly off-the-cuff comment triggered a report in The Wall Street Journal, and then dozens of other news stories about how Amazon — having killed off some major bookstore chains — is now laying plans to become one itself.

On Wednesday, Mathrani's company issued a statement saying his earlier comment "was not intended to represent Amazon's plans."

Amazon says it doesn't comment on rumor and speculation.

R.J. Hottovy, who follows Amazon as an analyst for Morningstar Research, called Mathrani's original remarks "a bit of a head-scratcher."

Hottovy says investing in storefronts doesn't fit neatly into the narrative Amazon has been selling successfully.

"In 2015, I think a big reason that the stock did so well, is the company really focused its investments on its core parts of the business, whether it be e-commerce, whether it be logistics, whether it be Amazon Web Services. To see them go so far against that would be a surprise," Hottovy says.

John Mutter is editor-in-chief of Shelf Awareness, which publishes news about the industry. He says there's probably a kernel of truth to the rumor about the stores — but just that.

"The basic idea that Amazon is going to open some more stores is accurate, but the number is wildly high," Mutter says.

Insiders like Mutter have long known the online giant plans to open stores, but they put the number at about a dozen over the next few years.

Mutter says it's not far-fetched to think the great online retailer would turn to physical stores. E-book sales have plateaued. They're popular for niche use, but printed books, he says, are experiencing a resurgence.

Outside Amazon's Seattle bookstore, Barbra Clouse says she hasn't gone "to a lot of bookstores lately 'cause there aren't too many of 'em."

She says she was drawn into the store visually: "The eye candy, the displays, and a book that had a cute dog on it."

Amazon's store is different from most other bookstores in that it stocks a limited number of titles. Much of the store is devoted to displaying the Kindle, the Fire and other Amazon devices. And the store encourages browsing and buying online by only showing prices when you scan the title at a kiosk or on a phone.

Mutter, the industry news editor, says Amazon's online store is great for finding a specific book. "But it's not a great place to find new titles, or discover new books that you didn't know about before," he adds.

In other words: Contrary to what people might say, they do like to judge books by their covers.

If Amazon expands its bookstore footprint, it will likely lead to more drama.

"They're not well liked by publishers or by other retailers," Mutter says. He says, it is, after all, king of online retailing.