Accessibility links
Heading Into New Hampshire, GOP 'Front-Runners' Are Anything But Republican establishment choice Jeb Bush was once the candidate to beat. No more: The success of Ted Cruz, Donald Trump and Marco Rubio in the Iowa caucuses puts new pressure on the party mainstream. 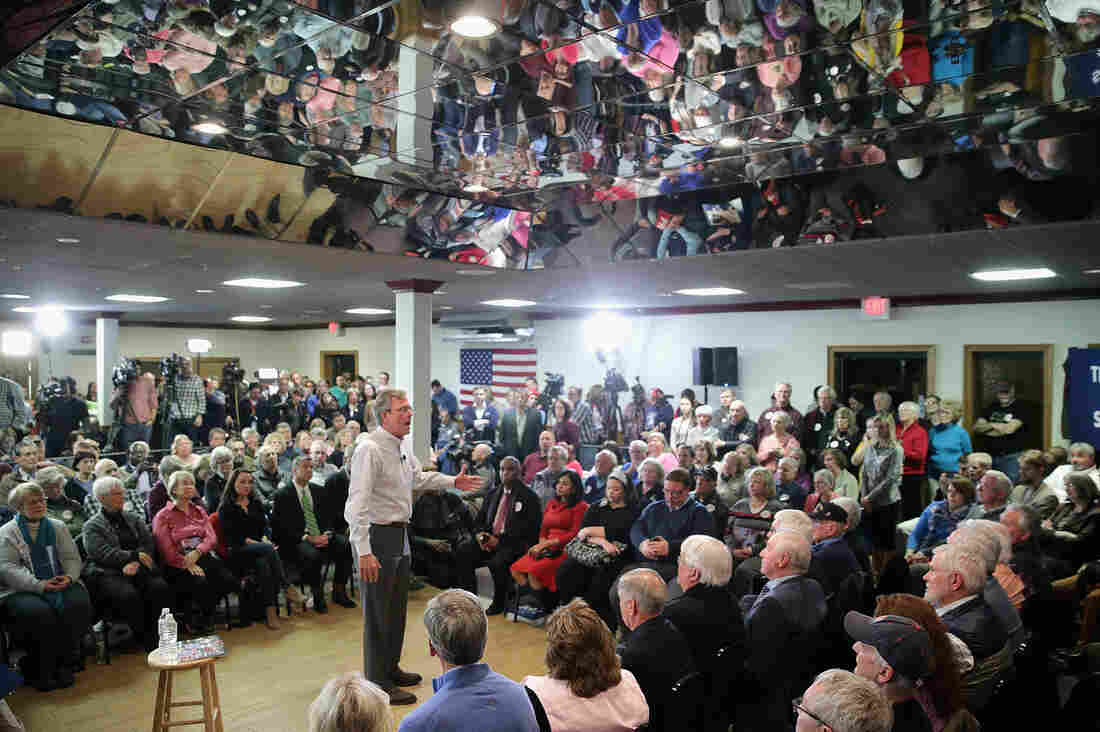 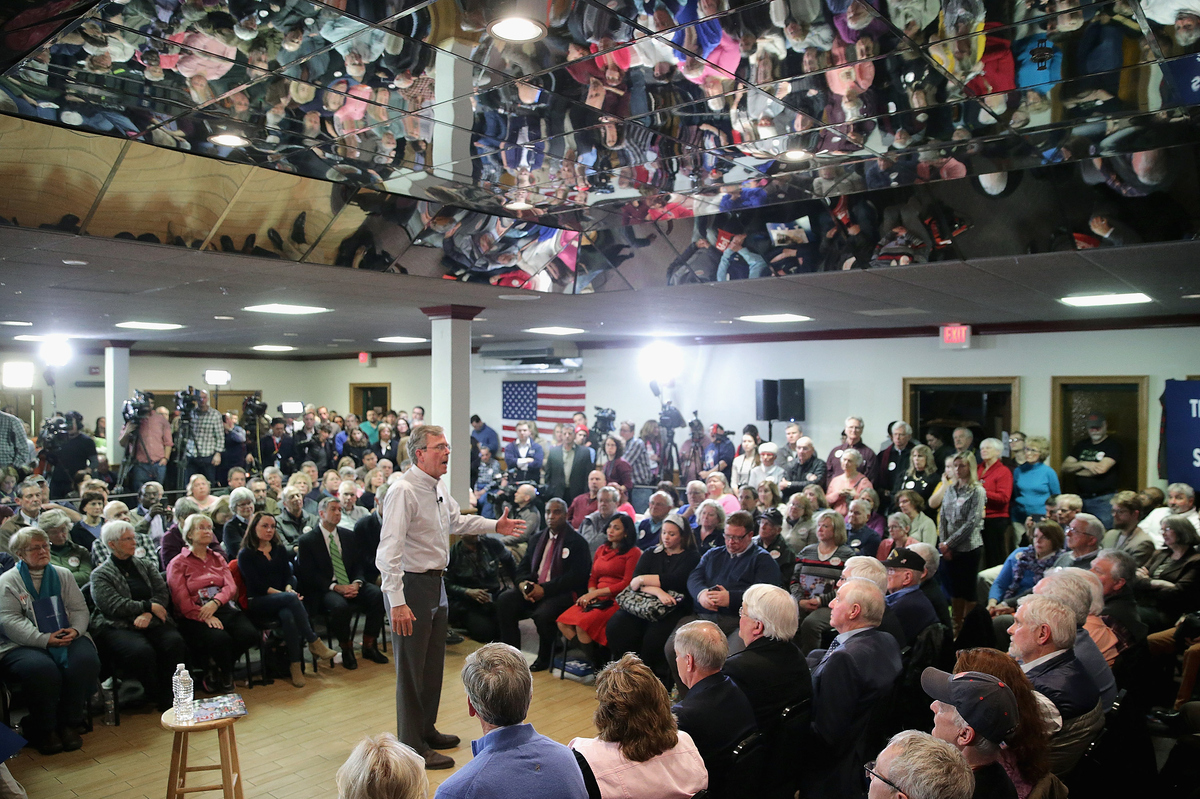 For Republicans who aren't named Ted Cruz or Donald Trump, the goal in New Hampshire's upcoming primary is to finish second — at best.

That's the best outcome the establishment Republican contenders can hope for following this week's Iowa caucuses, where Cruz and Trump topped the field in a tight three-way race with Florida Sen. Marco Rubio.

It's a far cry from the beginning of this campaign cycle, when Jeb Bush was the acknowledged Republican front-runner and had the backing of what was presumed to be a source of power within the GOP, the Republican establishment. Now, the power of the establishment is in question, and when Bush campaigns, he acknowledges membership in that class with some good humor.

It's a matter of pedigree.

"I'm part of the establishment because I am Barbara Bush's son," he said at a recent town hall meeting in Manchester, N.H. "Well, I'm not worried about that."

For Bush, and at least two other GOP contenders, it's also about having been a governor, and about having had to solve problems rather than advance an ideology.

At the gathering at Manchester's Alpine Club, where Bush fielded questions from voters, he also advanced an establishment outlook: Republicans are about governing well — not just expressing anger.

"Here's how we win: We persuade people that the conservative cause will lift them up — that it's not an angry, reactionary philosophy; it's a welcoming, hopeful, optimistic philosophy," he said.

"There is a mainstream, traditional Republican, and even in this Obama era, this Tea Party era, I think it still is some half of the Republican base," Cullen says. "We don't get as much attention, we don't make as much noise as other parts of the Republican coalition, but we do still exist."

Nothing bespeaks "establishment" more than a dynasty. And when Bush spoke at the Alpine Club, among those introducing him was Judd Gregg, a former New Hampshire senator and governor whose father was also governor.

New Hampshire State Senate President Chuck Morse, another Bush supporter, resists the idea of an establishment, but he admits that there are strong connections among long-serving Republicans.

"People like Sen. Gregg and myself — yes, of course," Morse says. "But I honestly believe that just creates relationships which is what I think politics is all about."

Those relationships are fine — until people get angry and say that none of it works and that the people in charge are responsible, a point that Morse concedes.

"You're right about that," Morse says. "I think the one thing that the Republicans have to do at this point is start pointing that arrow at the right person."

And by that, he means President Obama.

For now, though, the archers must point their arrows at one another.

To make a good showing, Bush has to compete for votes with the two sitting governors in the race: John Kasich of Ohio and Chris Christie of New Jersey.

In Iowa, where evangelical Republicans are more numerous, the three governors polled a combined 6.5 percent.

The polls in New Hampshire show all the governors far behind Trump. And many mainstream Republicans, like former state party Chairman Cullen, figure their numbers are self-defeating. 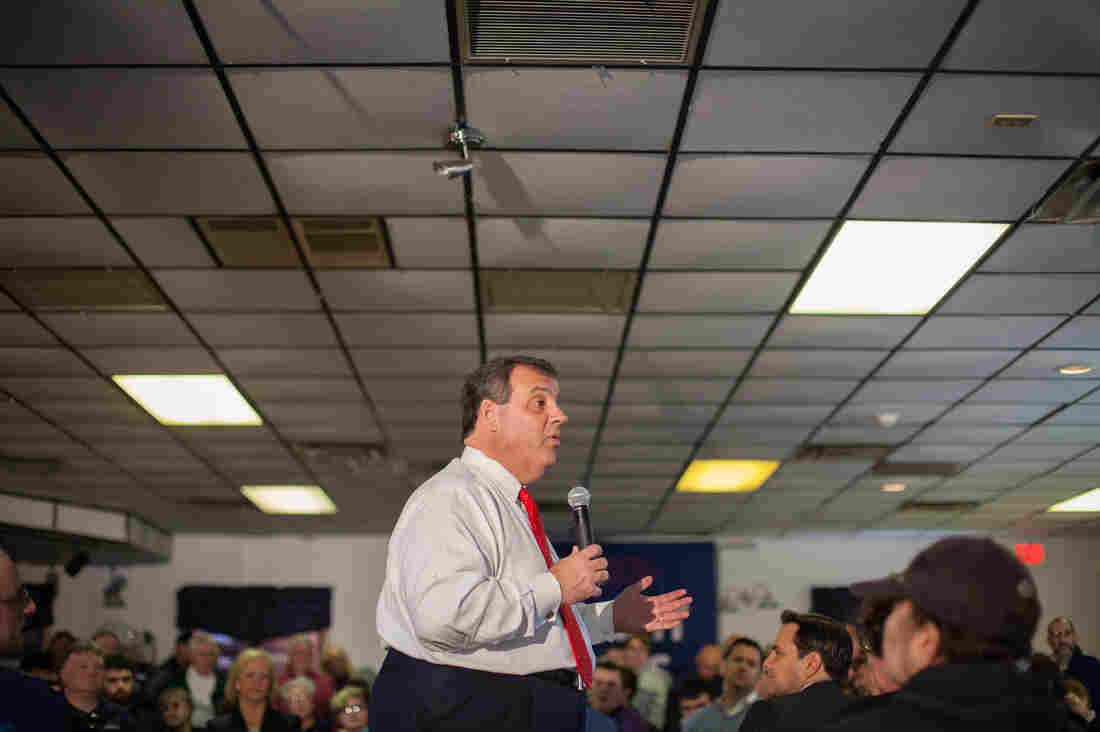 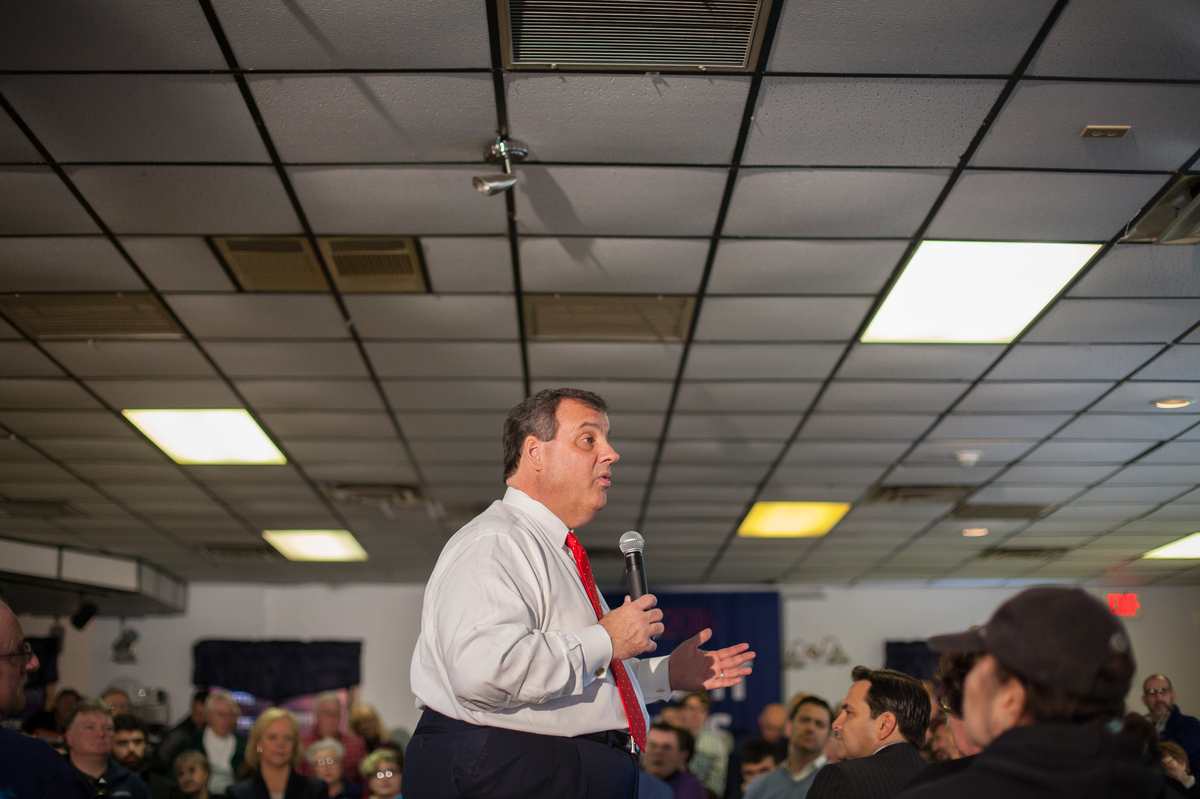 Chris Christie speaks at the Epping American Legion on Tuesday in Epping, N.H.

Come next week, Cullen says, the pressure will be on to consolidate establishment support behind one candidate to stop Trump. "And I think that 'stop Trump' movement will be very strong in the wake of what happens in both Iowa and New Hampshire," he says.

As for the other candidates, Cullen says he and others are concerned that Cruz can't carry swing Republican states.

"To my view, there are only a couple of candidates who make [New Hampshire] and other swing states competitive," Cullen says. "I've got my doubts that Ted Cruz can do that."

He thinks Kasich and Christie could do it — but not Bush. Voters, Cullen says, have already made up their minds about Bush.

The most intriguing candidate of the moment is neither a sitting governor — like these three — nor a political bomb thrower like Trump or Cruz.

Tuesday night, fresh from his third-place finish in Iowa, Rubio packed the town hall in Exeter, N.H. The room was filled with 700 people — and some genuine electricity. People cheered Rubio's arrival. They chanted his name. They laughed at his jokes. They applauded at his applause lines.

"When I am president, if we don't know who you are, and we don't know why you're coming, you are not getting in the United States of America," he said to applause and cheers.

When the Florida senator hit the national political stage six years ago, he was the darling of the newborn Tea Party. He challenged the Republican governor for the Senate nomination and won.

Once in the Senate, though, Rubio worked with Democrats on a plan for immigration reform, a plan he later walked away from. 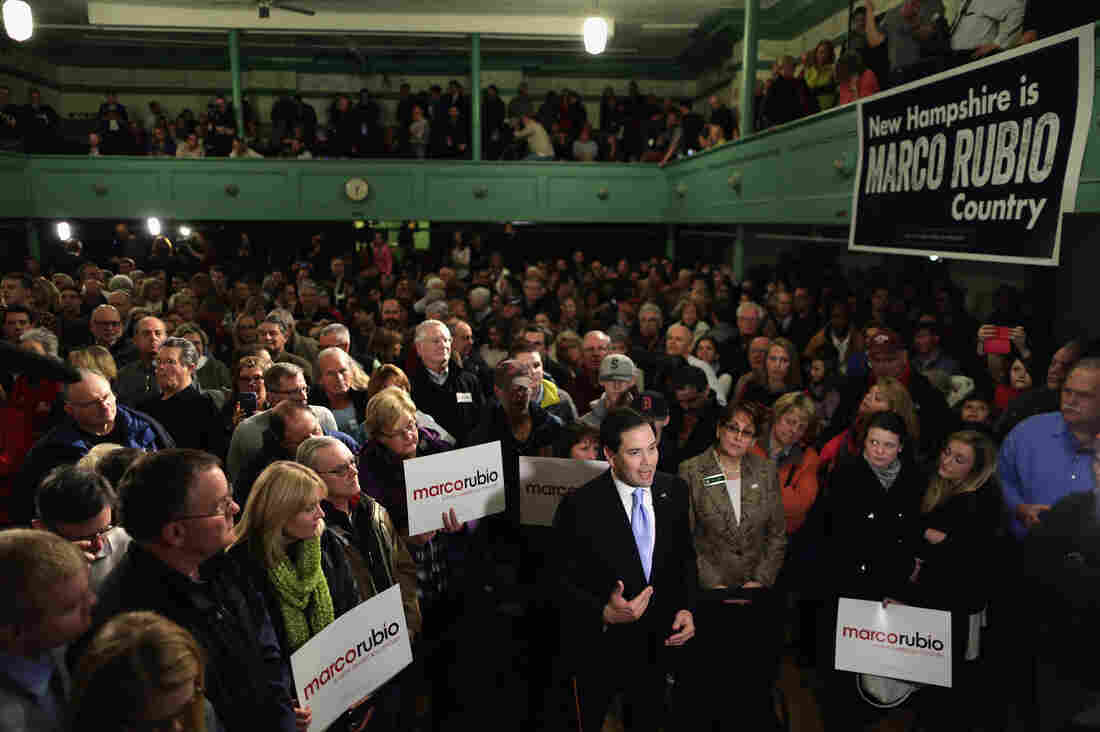 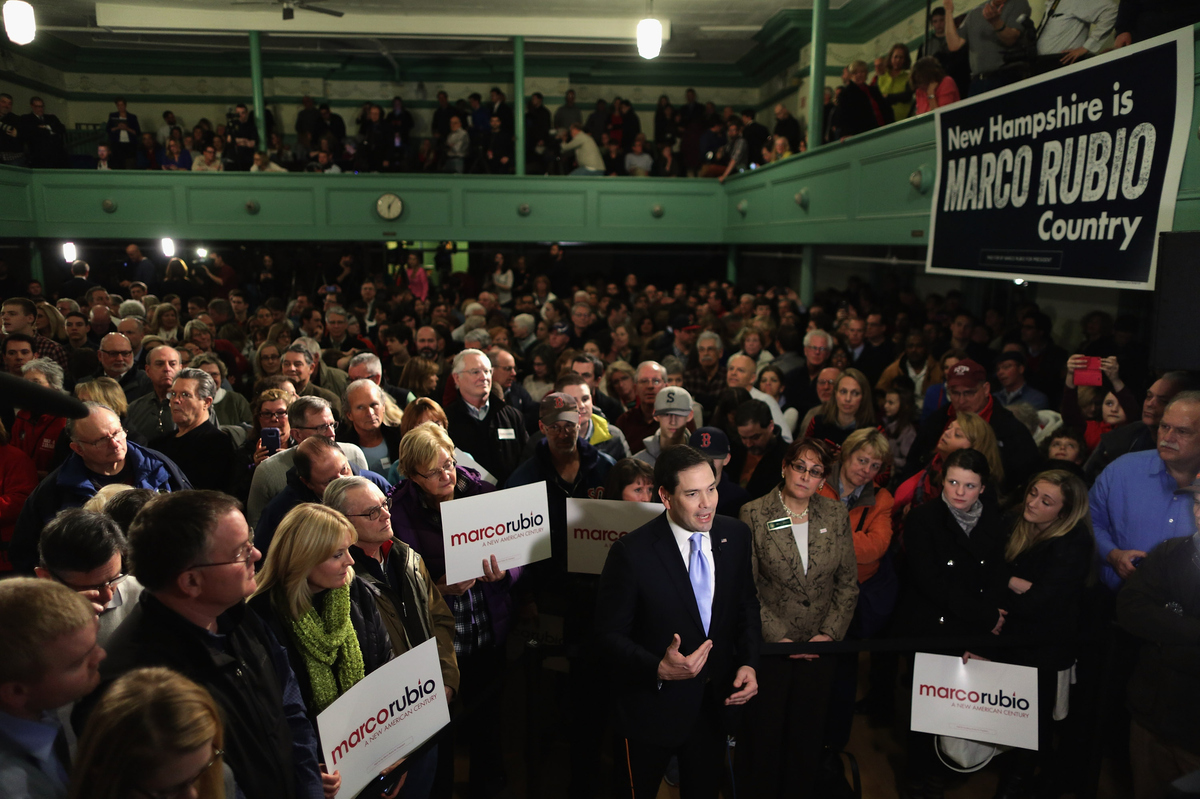 Marco Rubio is interviewed on live television before holding a campaign rally in the Exeter Town Hall Tuesday in Exeter, N.H.

"Well, he's making the argument here in New Hampshire that he can unite the party, that he can appeal to Tea Party conservatives, liberty conservatives, traditional Republicans," Cullen says. "I don't think he's the only candidate who's making that argument or could do it, but the other candidates maybe are more easily identified as traditional mainstream Republicans."

Ellen Hyatt and Mary Sue Sanderson, both from Hampton, N.H., and both of whom identify themselves primarily as moms, were among those at the Rubio rally. Hyatt said the two of them have been mulling over the primary race.

"We were talking Cruz versus Rubio. And much of what they say is very similar but we really are debating very hard about what the differences are," Hyatt said.

To Sanderson, the fact that Rubio is already in D.C., and a part of the Republican establishment, is a strength. "He knows what's going on, and I think that knowing what's going on is actually a big help when you're faced with crisis decisions that need to be made," she says.

In the past few days, some of the Republicans who have failed to attract support this cycle have dropped out. But for a "Stop Trump, Stop Cruz" movement to gain traction, some of the mainstream Republican contenders will have to drop out, too.

That's tough. For one thing, as Cullen, the former state GOP official, says, these are not people accustomed to folding their tents.

And there's another obstacle to winnowing the establishment field: Money isn't necessarily a problem. The campaign finance rules make it possible to keep running with just one supporter — provided he's a generous billionaire.