Accessibility links
Book Review: 'The High Mountains of Portugal', By Yann Martel Yann Martel, author of The Life of Pi, conjures up three stories grounded in grief and magical realism in his latest novel.

Confronting Loss While Scaling 'The High Mountains Of Portugal'

Confronting Loss While Scaling 'The High Mountains Of Portugal' 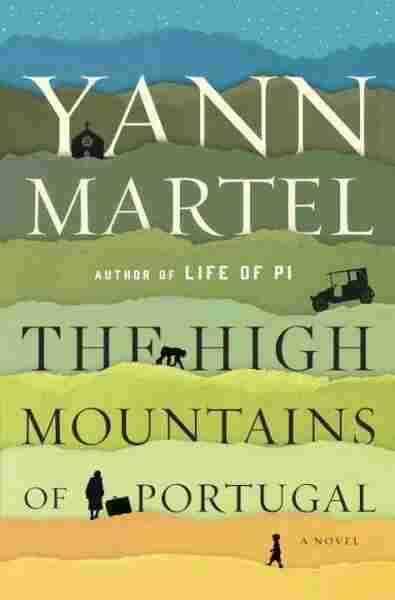 When Yann Martel gave us the international sensation Life of Pi in 2001, readers discovered a novelist-alchemist, capable of spinning gold out of improbable characters and anomalous scenarios. A tiger and a teenager awash together on the deep blue sea for 227 days? Only Martel could charm us into that suspension of disbelief, making the unlikely tale into fable rather than fluff.

In his new novel, The High Mountains of Portugal, the Spanish-born Canadian author works in a different setting — or three settings, actually, since he offers a series of three interlocking tales. The whole is more than the sum of the parts here, since each section picks up power from the others. Three makes one, as in the Trinity.

In turn-of-the-20th century Lisbon we meet a young man named Tomas, whose life lies in ruins after the death of his beloved wife and young son. Tomas has discovered an ancient diary that sends him on a quest for a lost treasure in the mountains of the book's title, a geographically obscure realm that actually contains no mountains at all, but simply low, nondescript hills and bluffs. These Tomas transverses in one of the first European motorcars, in search of an artifact he believes will shock the world: a carved wooden crucifix displaying a chimpanzee as the Christ figure. "With this object," he says, "I'll give God his comeuppance for what he did to the ones I love." Readers will know they are in Martel-land when they discover that the hero proceeds backward whenever and wherever he walks, miraculously, sure-footedly, with nary a trip or fall.

Flash-forward 35 years, as a Portuguese pathologist and Agatha Christie devotee unlocks a mystery of his own. This doctor, too, mourns the loss of his drowned wife — who's dead but not gone, since she appears as a gabby ghost. During an autopsy on an elderly man's corpse, the doctor exhumes a marvelous series of fantastic objects, including a figure of a chimp embracing a bear cub. (A measure of Martel's magic is that the procedure seems bizarre yet believable.)

In the third and most affecting part of the book, Martel again jumps decades forward, to give us a Canadian politician named Peter Tovy. He, also, has suffered the anguish of losing a spouse. In a spasm of grief-stricken whimsy, Tovy adopts an ape from a rundown animal preserve. The poet Rilke once wrote a simple but timeless exhortation of self-understanding: "You must change your life." Senator Tovy does just that, leaving friends, job and home to spirit the chimp to Tuizelo, his family's ancestral home in those same High Mountains. The site has become the locus of meaning for every piece of the puzzle in this strange and wonderful novel — and those pieces come together in a masterful ending, the kind that sends you back to the start to begin all over again.

Martel most definitely has his quirks. There are some odd turns of phrase in The High Mountains: "... the road continues nearly villagelessly," he writes of a barren stretch of landscape. A flock of animals is "a creamy billow of fluffy sheepdom." But the exuberant wordplay enhances the equally vivid storytelling.

I took away indelible images from High Mountains, enchanting and disturbing at the same time: the motorcar hitting obstacle after obstacle as it gradually, comically falls to pieces (as does its driver), or the ape as he swings his way across the rooftops of a Portuguese village. As whimsical as Martel's magic realism can be, grief informs every step of the book's three journeys. In the course of the novel we burrow ever further into the heart of an ape, pure and threatening at once, our precursor, ourselves. You must change your life.