Accessibility links
For Pro Athletes, Knowing When It's Time To Call It Quits Earlier in the season, many suggested Peyton Manning was through and should retire. He has since rebounded and will lead his Denver Broncos against the Carolina Panthers in Sunday's NFL Super Bowl. 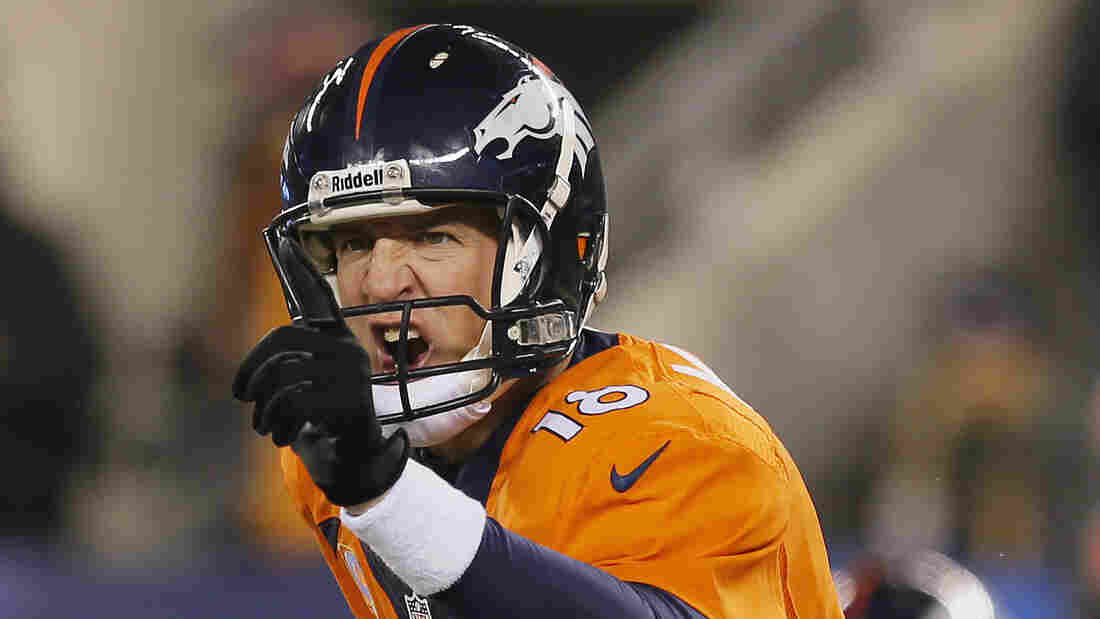 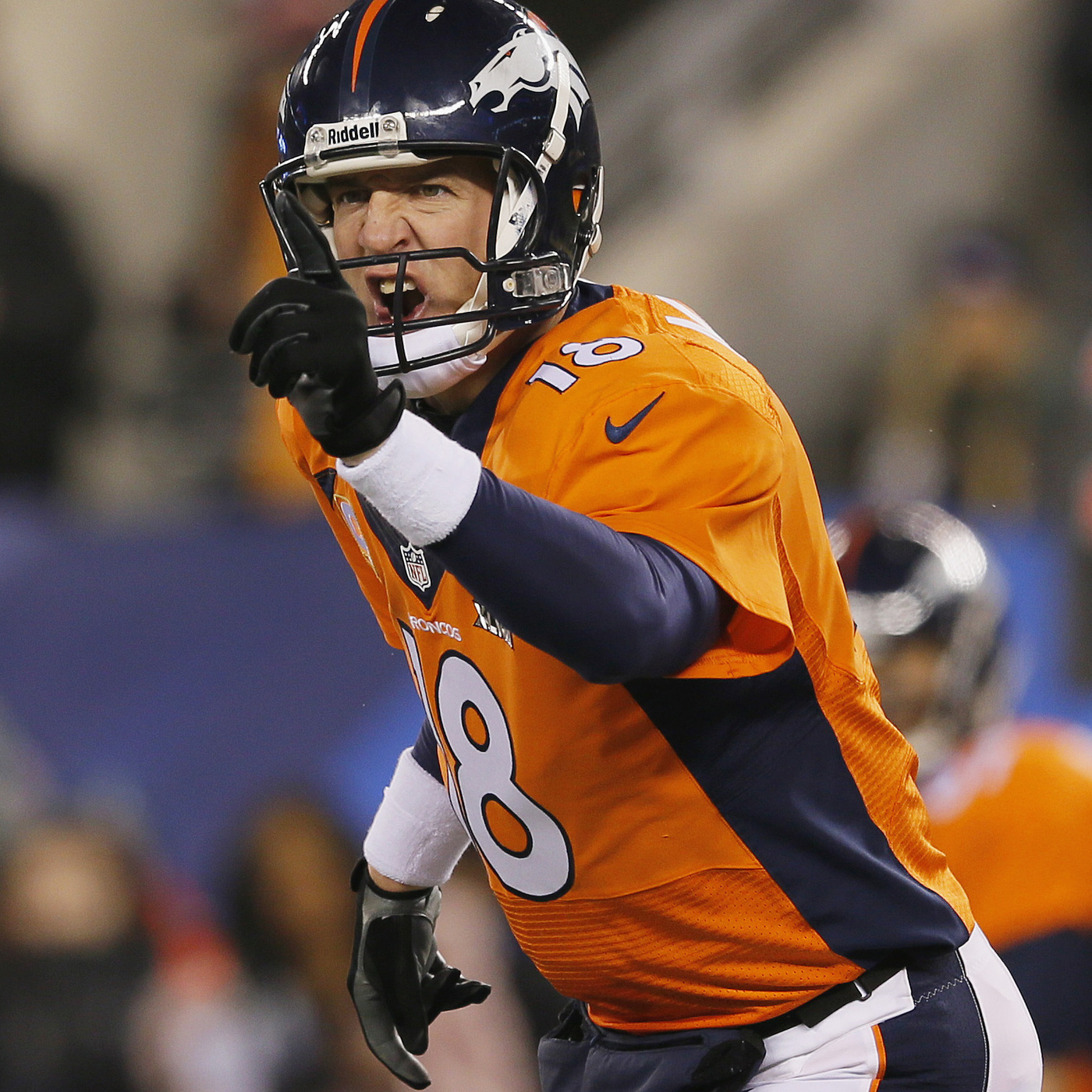 Sunday's Super Bowl 50 — Carolina Panthers versus the Denver Broncos — could mark the end of an era.

The veteran Broncos quarterback turns 40 next month. After a season plagued by injury and poor play, many suggested it was time to retire. Manning fueled speculation about his future after Denver won the AFC Championship game and microphones heard him tell New England head coach Bill Belichick, "This may be my last rodeo."

In the run-up to the Super Bowl, Manning has deflected talk about his career plans, simply saying he's focused on the immediate task ahead – beating the Panthers.

And so we wonder - with Peyton Manning, and in a broader sense all elite athletes - when do they know it's time to quit?

According to Steinberg, "When I think that they're too injured, or there's a diminution of their skills and talk to them about retiring, it's like I just committed heresy!"

Why so hard to leave? Certainly there are the obvious reasons – no more cheering crowds; no more special treatment; no more gobs of money. Retiring in your 30s may seem young, but if you're leaving something you've been doing exclusively for 25 or 30 years, that's tough in any profession. Adding to this, says Steinberg, is the fact that most top athletes are stubborn by nature.

Certainly there's a long list of premiere athletes who fight the inevitable, hang on too long and have an ending not worthy of their earlier greatness. Think of one-time Super Bowl hero Joe Namath, who quarterbacked the New York Jets to glory, but finished up with a single injury-filled, mistake-prone season playing for the Los Angeles Rams. Or boxing icon Muhammad Ali, who fought a few fights too many and might've paid even more with his health.

It is very rare, says Leigh Steinberg, to go out well...whether that means on the athlete's own terms, or on top, or both.

It's rare. But not impossible.

A Graceful Exit From Professional Golf

On a weekday morning this week, Lorena Ochoa put her newborn son Diego down for a nap. Diego is Ochoa's third – there's also Pedro, 4, and Julia, 2. It wasn't too long ago that Ochoa was dominating women's professional golf instead of changing diapers and taking walks to the park. But in 2010, Ochoa shocked the sports world when she retired at the age of 28. Smack dab in her prime, Ochoa was ranked number one in the world, a winner of two major championships and millions in prize money.

"When I look back and I see what I did," she says, "I just feel even luckier because I made the right decision at the perfect time."

Ochoa may have shocked golf fans and some of her competitors with her decision. But those closest to her knew the plan all along – from early in her career, Ochoa wanted, at some point, to marry and raise a family, without golf. She wanted to dive in to that domestic part of life with the same single-minded vigor she had banging golfballs around the world. Ochoa gave herself about 10 years on the LPGA Tour. She says knowing there'd be an end, actually helped her game.

"When I was in a difficult position and I was either upset or tired or angry or disappointed," she says, "I keep saying, 'OK, y'know I have three or four years left. I'm going to do it and I'm going to continue and I'm going to put everything into it.'"

Even the most devoted parents know raising three kids, all under the age of five, can test one's mettle. It might even make a former champion golfer pine for the relative simplicity of high-stakes competition. But Ochoa says no – she has no intention of returning to the tour. She's quite happy in her current life and fills her competitive needs with everything from water skiing to backgammon to weekend golf with her husband.

Again....Lorena Ochoa is the exception.

Most athletes, says Leigh Steinberg, have pangs after they leave. Sometimes more than pangs. Steinberg describes what a frantic post-retirement phone call from an athlete often sounds like.

"'This is agonizing and excrutiating,'" Steinberg mimics. "'I can't watch these games and not play! I know I've got more in me. I made the wrong decision. I shouldn't have retired!'"

When Steinberg gets those calls, he says he has to strike a careful balance. On the one hand he never wants to lose confidence, rapport and understanding with his clients. On the other, he can't be one more sycophant, he says....the kind of enabler with which famous athletes often surround themselves.

"With most agents," Steinberg says, "if their client was standing on the 90th floor of a building, contemplating jumping, they'd tell the athlete, 'Gravity doesn't apply to you! You're different. You can fly. Go ahead and jump!'"

Steinberg says his clients who do best with retirement are those who have a next thing, often a second career, into which they can pour all their energy and competitiveness.

Sunday, Peyton Manning will pour all that into a big football game. Will it be his last? A victory and then retirement would be the perfect Hollywood ending. But even that might not be enough. Take the case of Manning's boss. Denver general manager John Elway finished a stellar career quarterbacking the Broncos to consecutive Super Bowl wins in the late 1990's. Hollywood times two.

But when Elway retired after the second title, he wept.