Accessibility links
Fact Check: Hillary Clinton And Bernie Sanders On Campaign Finance Reform, 'Citizens United' In their most recent debate, the Democratic candidates made claims about how they'd want to change the way money works in politics, and how they benefit from unlimited campaign spending. 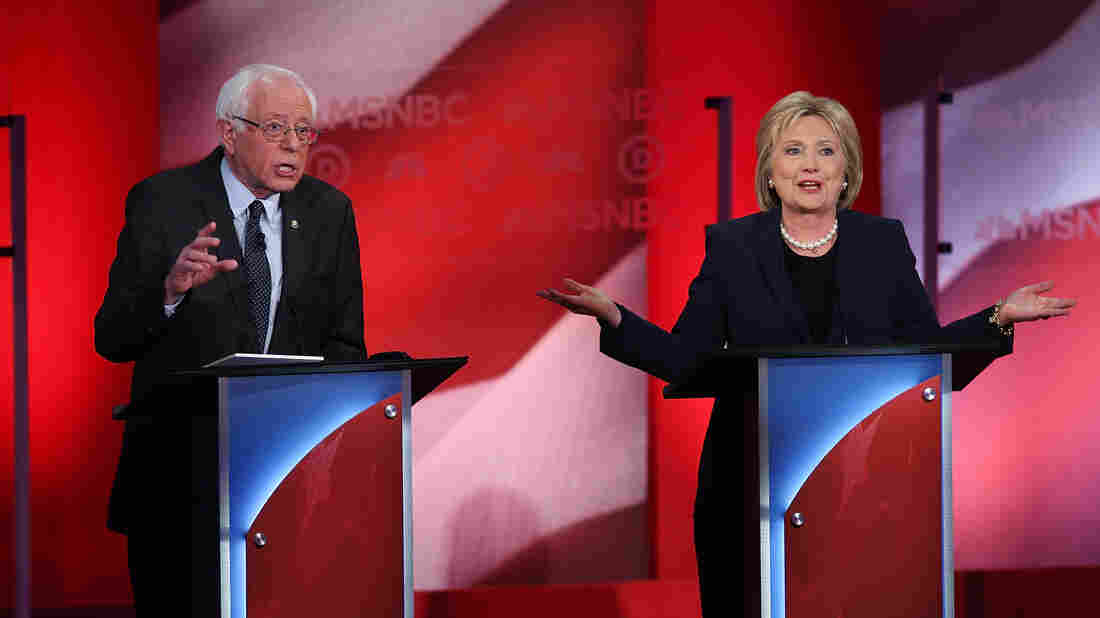 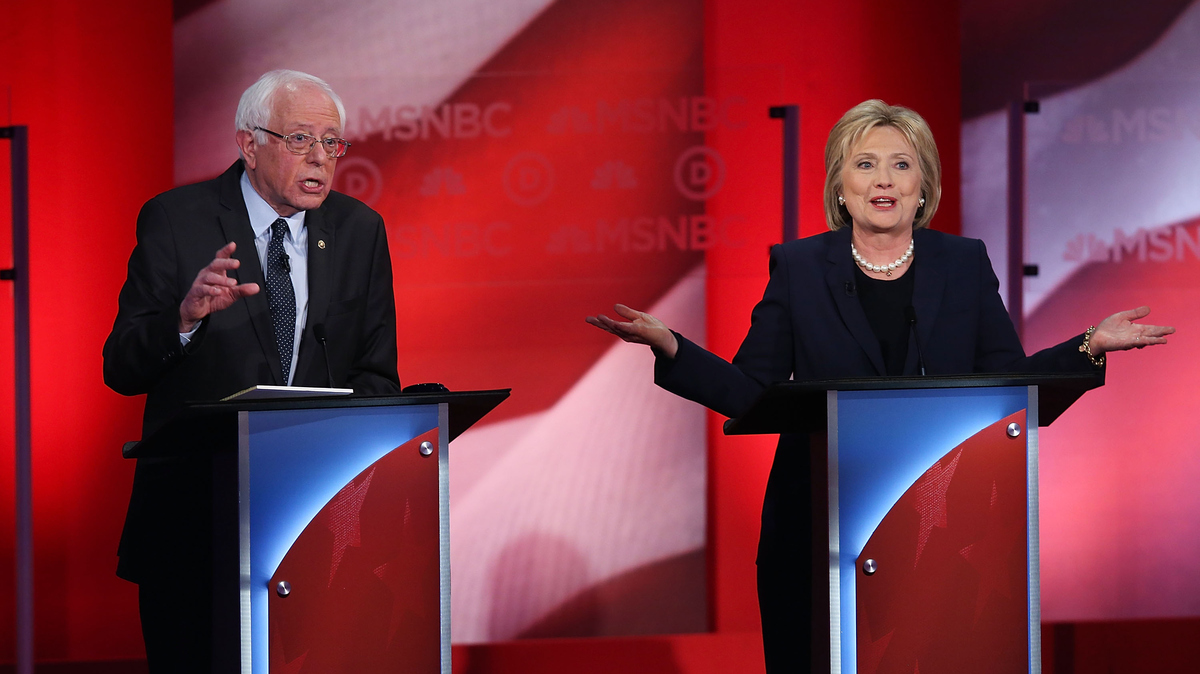 Former Secretary of State Hillary Clinton and Vermont Sen. Bernie Sanders both pledged their allegiance Thursday to the cause of campaign finance reform during the final Democratic presidential debate before the New Hampshire primary.

Polls show that many Americans agree: Too much money comes from too few donors. The candidates' solutions, predictably, were somewhat less certain.

Sanders: "What we should do, and one of the things we should do is not only talk the talk, but walk the walk. I am very proud to be the only candidate up here who does not have a superPAC and special interests."

Clinton: "Today, you've got hedge fund billionaires aligned with Karl Rove, running ads against me to try to get Democrats to vote for you. I know this game. I'm going to stop this game."

SuperPACs came into existence in 2010, after Citizens United and another court ruling. Unlike regular political action committees, they can raise unlimited money from corporations, unions and the wealthy.

They're supposed to be independent players, not coordinating with candidates or party committees. But this year, every major presidential candidate except Sanders has at least one "independent" superPAC on his or her team. Republican Ted Cruz has five.

Sanders may not have a superPAC near at hand, but the union National Nurses United is pretty close. It endorsed him this summer, and its political arm sends nurses to knock on doors and to trail his campaign bus in one of their own. NNU has spent more than $1 million so far. Friends of the Earth's superPAC has run pro-Sanders TV ads in Iowa and New Hampshire, and four other progressive groups have made smaller efforts.

Conservative superPACS have already poured more than $5 million into attacks on Clinton, according to the pro-transparency Sunlight Foundation. They include American Crossroads, guided by GOP consultant Karl Rove; Freedom Partners Action Fund, part of the Koch brothers network; and Keep the Promise I, a pro-Cruz superPAC. None of these groups supports Sanders.

Clinton gets support from unions and superPACs representing the National Education Association, Human Rights Campaign and Planned Parenthood, among others. But the superPAC aligned with her campaign, Priorities USA Action, is saving its money for the general election. As of Dec. 31, it had $35.8 million on hand and had spent just $5.7 million – less than $400,000 of it for Clinton.

And finally, Sanders is drawing some superPAC attacks too. Ending Spending Action Fund, has spent $774,321 against Sanders, according to Sunlight.

Sanders: "No nominee of mine, if I'm elected president, to the United States Supreme Court will get that nomination unless he or she is loud and clear, and says they will vote to overturn Citizens United."

Attacking this 2010 Supreme Court ruling, which let corporations and unions spend freely to promote or attack candidates, is a sure applause line at Democratic rallies. Actually doing something about it is much harder.

To get a Supreme Court that would reverse the decision requires changes on the Court. That could happen over the next four years, when four of the nine justices will be 80 or older. Both Sanders and Clinton promise to put forward nominees who oppose the legal theory underlying Citizens United – just the kind of litmus test that liberals criticized in less partisan times.

To circumvent the courts, some reform advocates call for a constitutional amendment. Both Sanders and Clinton endorse the idea. But it would amount to amending the First Amendment, something other reformers are wary of. It's also hard, requiring approval by two-thirds of each chamber of Congress, or of a constitutional convention, plus ratification by three-quarters of the 50 state legislatures.

Congress has even refused to pass legislation to fulfill a section of the Citizens United ruling that calls for immediate disclosure of corporate political spending. These have been largely party-line votes.

MSNBC moderator Chuck Todd asked Sanders why he isn't seeking public financing, a system that was used by the winners of every Democratic and Republican nominating contest from 1976 to 1996.

Sanders: "It is a public financing system that everybody knows is antiquated. It no longer works. Nobody can become president based on that system."

He's right. The public financing system badly needs updating. As it is, candidates get too little, too late, compared to what's being spent in modern campaigns.

A publicly-financed candidate can spend up to $48.1 million in the primaries. Both Clinton and Sanders have already raised more than twice that much.

One 2016 candidate did apply for public financing: Democrat Martin O'Malley. He qualified to get $846,365.09 (money supplied by the $3 public-financing checkoff on income tax forms). The Treasury sent him the first $100,000 on Jan. 4. O'Malley finished a distant third in the Iowa caucuses Feb. 1 and dropped out that night.

Clinton and Sanders both say the system needs fixing, and some sort of public financing should be available for House and Senate candidates. With Republicans likely to keep their House majority in November, public financing, like other big changes in the campaign finance system, seems like a long shot.