Accessibility links
Love The Music Of Coen Brothers Films? You Can Thank This Guy Burwell has scored 16 movies for the Coens, but his work on Hail, Caesar! — as well as Todd Haynes' Carol, for which he's nominated for an Oscar — presented a few brand-new challenges. 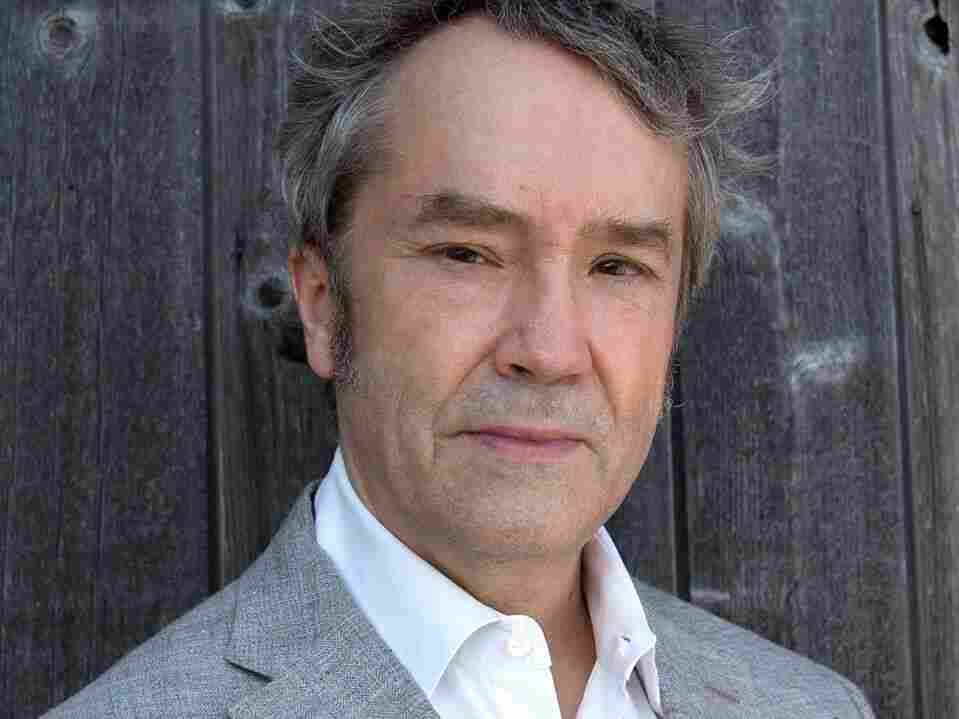 Carter Burwell has scored 16 films for the Coen Brothers, including their latest, Hail, Caesar! Tycho Burwell/Courtesy of the artist hide caption 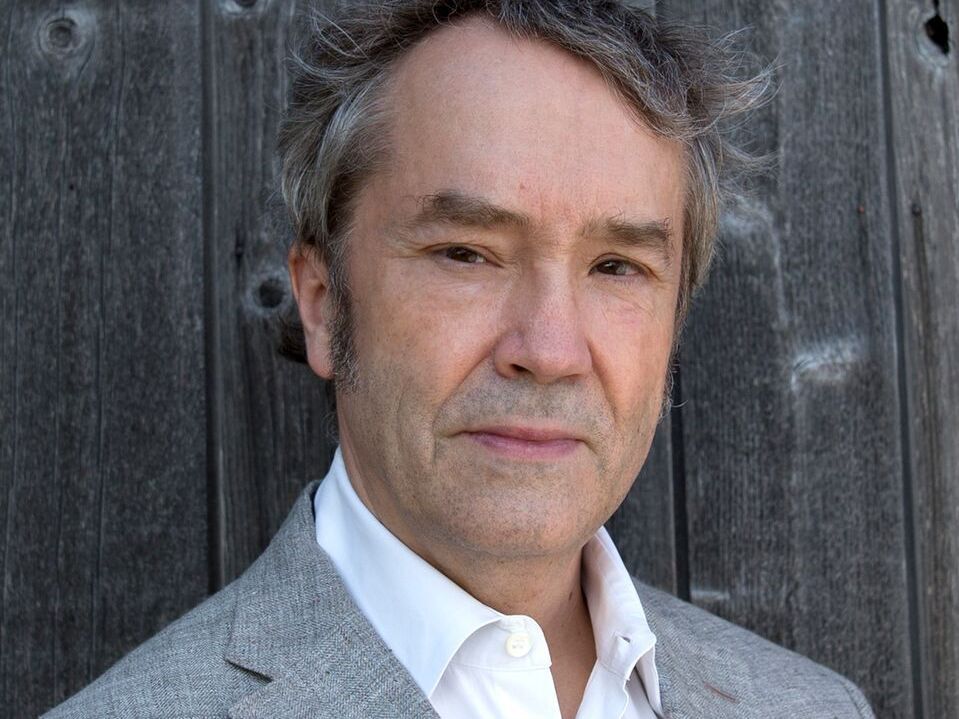 Carter Burwell has scored 16 films for the Coen Brothers, including their latest, Hail, Caesar!

Tycho Burwell/Courtesy of the artist

You might call composer Carter Burwell the third Coen brother. His work isn't as well-known as the T-Bone Burnett-produced soundtrack albums for O Brother, Where Art Thou? and Inside Llewyn Davis, but he has been part of Joel and Ethan Coen's creative team ever since their feature-length debut, Blood Simple, in 1984.

Burwell says he didn't intend to be a film composer, or even a professional musician." It is, in fact, just an accident of the way that Blood Simple was received, frankly," he says. "Other people started calling me and asking me to do film scores. So, yes, it's entirely their fault."

And the Coen brothers don't make it easy. In their latest, Hail, Caesar!, which satirizes Hollywood's golden age, there are several films being shot at the same time on the sound stages of the fictional Capitol Pictures. The Coens asked Burwell to score each of them: from the Roman epic that gives the film its title, to the corny Western comedy being shot next door.

"A lot of film music is putting on a hat and being like an actor," Burwell says. "In this case, I had to put on lots of different hats. But I love a challenge."

Carter Burwell studied animation and computers at Harvard, and put that education to use at the New York Institute of Technology. At night, he moonlighted as a keyboardist in various punk bands. That's how the two brothers from Minnesota found him and offered him his very first scoring assignment. 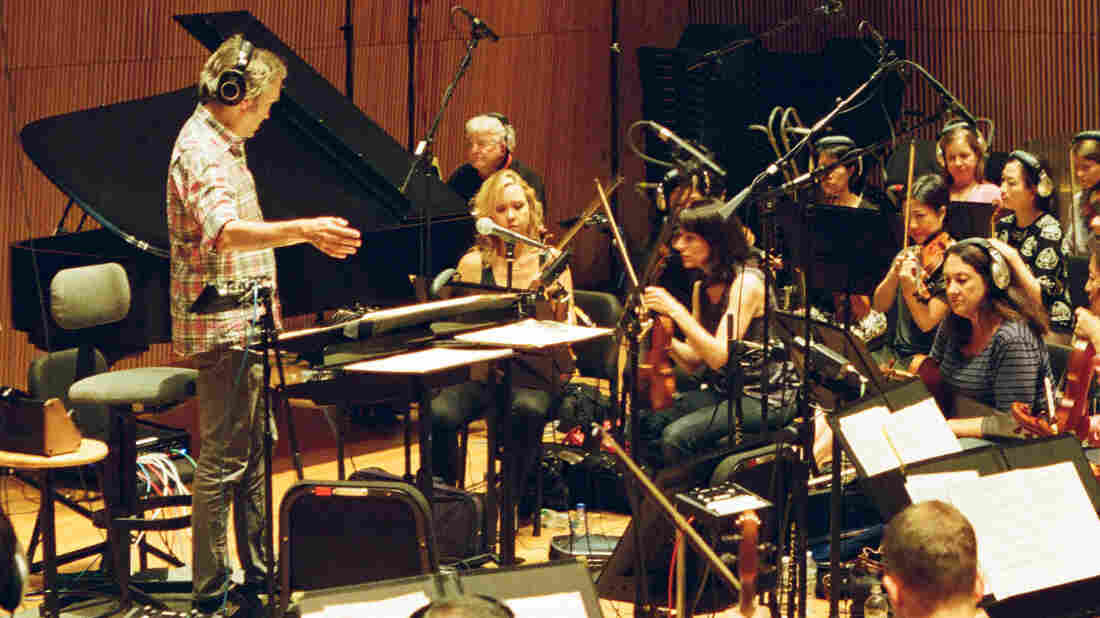 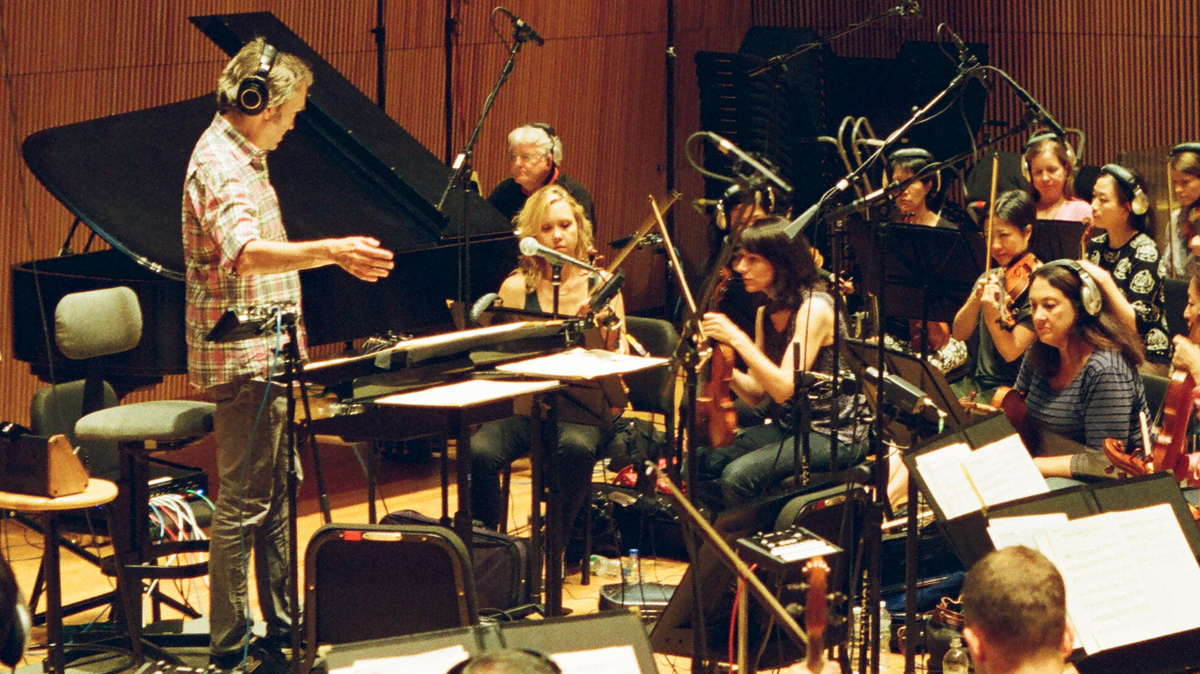 Carter Burwell conducts at a scoring session for Hail, Caesar! at the DiMenna Center in New York.

Despite Burwell's lack of formal training, Joel Coen says the brothers have always felt like they were in good musical hands.

"Carter is so good at sort of moving into these different kinds of storytelling," he says, "and understanding what the sort of imperatives of the movie are, and what it needs musically."

That's good, because the Coens don't like to give Burwell too much instruction up front. Burwell says they discuss all the practicalities, but he can't necessarily ask what a scene is really about.

"You ask them that, they go 'ummmm,' 'uhhh'... and then they start pacing," Burwell says. "And then that's kind of the end of the meeting."

But Ethan Coen says too much communication isn't necessary.

Burwell says he's certainly seen that relationship play out. "I think the classic example is Gabriel Byrne asking them what the meaning of his hat was in Miller's Crossing — why the hat is blowing away, and why he has a dream about a hat," he says. "And they were at a loss for words. I think their answer was, 'Well ... it's his hat.'"

Even though Burwell's music has been integral in the Coen brothers' filmography, he got his first ever Oscar nomination this year, working for a different filmmaker. His score for Todd Haynes' Carol, about same-sex lovers in 1950s America, plays a crucial role, often expressing what the characters cannot. Burwell says it put him a little closer to center stage than he usually prefers.

"I'm a bit more of a quieter person," he says, "and often the music is more behind what's going on. Whereas in this film, it's really like a member of the cast."

Carol is the third project Burwell has scored for Haynes, after Velvet Goldmine and the HBO miniseries Mildred Pierce. The director says there's a personal quality to Burwell's work — and that when the composer read the Carol script, he told Haynes it reminded him of his mother and what her experience may have been like. "He's a very curious, obviously incredibly gifted and sensitive and aware person," Haynes says. "And so he brings all of that to the process."

Unlike the Coens, Burwell says, Haynes loves to dig into the subtext and meaning of the music.

"Not everyone, including musicians, is good at discussing music in verbal terms — but Todd is." Burwell says. "He's actually very good at listening to a piece of music and saying in words what that music is doing to the scene, or to the characters, or to the film."

For Carol, Burwell and Haynes agreed that even though the music was critical in communicating those unexpressed feelings and desires, less was more. Burwell brought in a batch of different melodies and sketches of themes, and they tried them against the scenes to see how they played. "And I think we both really felt that the quieter ones summoned the most power," Haynes says, "and sort of elicited the most in the viewer."

Burwell says he tries to work with people who understand the virtue of withholding information or leaving the audience uninformed and even confused. "It's hard to sell discomfort to a studio executive as a feature of a film," he says. "But, in fact, a lot of the films I like, that's one of the main qualities they have. They leave you uncomfortable, and uncertain. And I think that's a valuable feeling."

So is there anything Carter Burwell can't do? Maybe one, Ethan Coen says: "There's a showtune in the movie," he explains with a chuckle, "and Carter said, 'I don't know if I can do this.' ... And he was kind of right." Nobody's perfect.