Accessibility links
Hillary Clinton or Bernie Sanders? Young Democrats Weigh In Two young Democratic activists say their own experience — and what they know about the experience of both Clinton and Sanders — brought them to support different candidates. 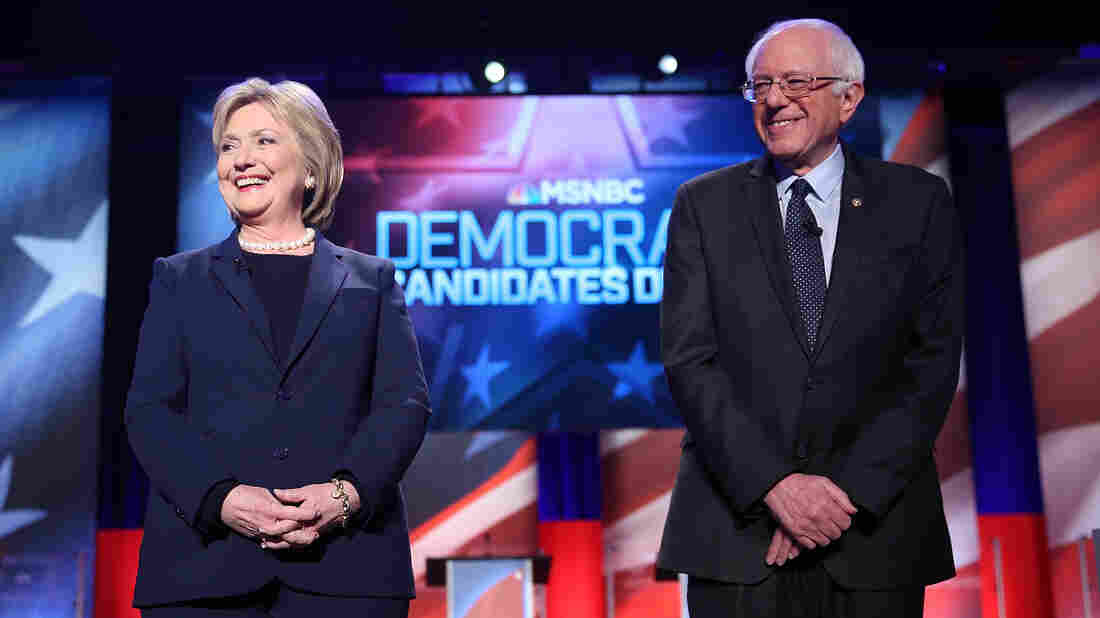 Hillary Clinton and Bernie Sanders stand next to each other at the start of the MSNBC Democratic Candidates Debate Feb. 4, in Durham, N.H. Joe Raedle/Getty Images hide caption 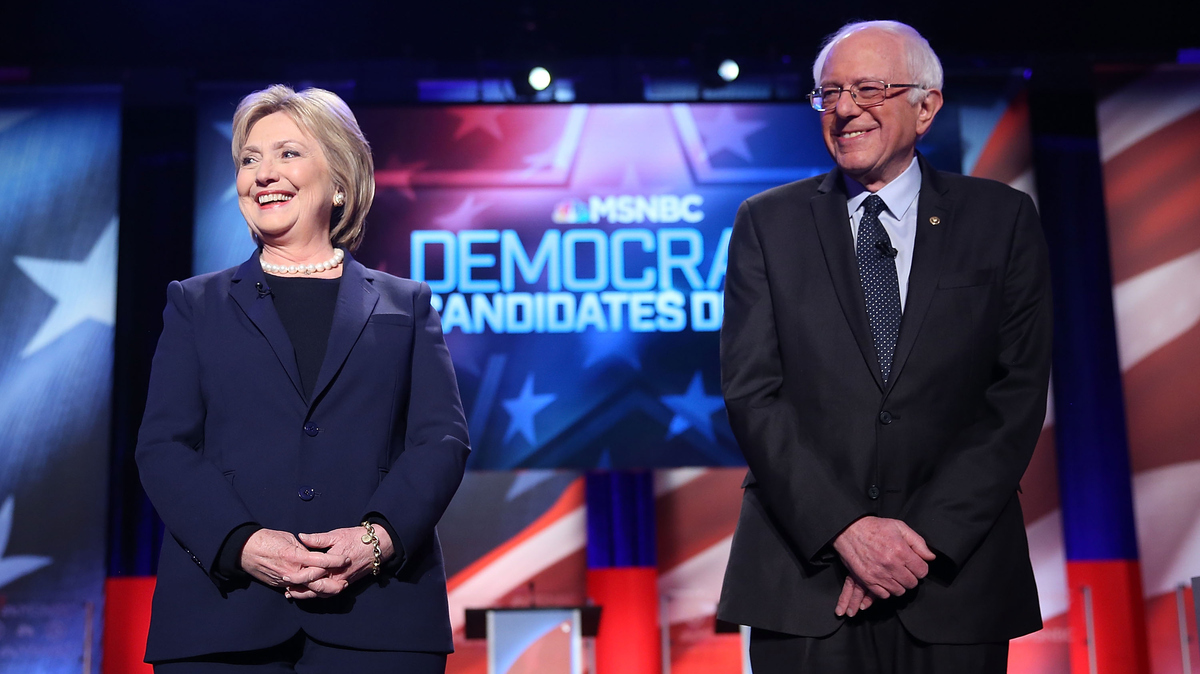 Hillary Clinton and Bernie Sanders stand next to each other at the start of the MSNBC Democratic Candidates Debate Feb. 4, in Durham, N.H.

Primary season has officially begun. And as the presidential candidates campaign ahead of Tuesday's New Hampshire primary, both Republicans and Democrats are making big arguments in response to some big questions about their party's future.

Is there such a thing as an "establishment lane" that can win the GOP contest? Can a Democrat be both moderate and a progressive? Is it better to be pragmatic or idealistic?

Last week, NPR's Rachel Martin talked with some young Republicans for their insights on the contest. This week, NPR spoke with two young Democratic activists about what's at stake for them.

Atima Omara, 34, is a political strategist and the former president of Young Democrats of America. She supports Hillary Clinton and works on women's rights issues. Nicole Castillo, 32, backs Bernie Sanders now, but supported Hillary Clinton in 2008, saying Clinton was "the most prepared for the job." She serves as national advisor to millennial issues at BeVisible Latina, a career social network for Latinas.

Nicole Castillo: I think it was through my own journey of trying to figure out how to make systems change that I started to experience frustration with the system. Is the system working for my community? And so, as I come to [Clinton's] campaign now, I think about, is the system the only way in which we can make change? And might another narrative, perhaps the narrative of Bernie Sanders be one that would be more empowering to my community?

[Sanders] is driving a people-powered campaign. I think especially if you look at millennials and Latinos, we don't have exactly the best track record for voting. And I think that's often because we see the system isn't for us. And so, his narrative is one that [says] "Yes we are going to make system change, but it's going to take all of us."

Atima Omara: She has been working in politics for a very long time; she's an advocate on the issues that I very much care about: paid family leave, she's introduced equal pay legislation. She came out first in repealing the Hyde Amendment, something that will actually benefit low-income women who have not had access to abortion on federally-funded healthcare.

She's very pragmatic. She does understand the way Congress has sort of devolved to disarray. I think it takes somebody who can be really creative and innovative about getting stuff done as president, who has to deal with Congress.

On whether or not Hillary Clinton is part of the establishment

Castillo: What people mean by [establishment] is more than having a career in politics. I think specifically they're referring to the amount of corporate money that she's receiving.

Omara: There are many candidates who run for public office who've taken money for speeches. ... I could understand why some people would be concerned about that, but she took it to make a speech, as opposed to [Wall Street] donating $645,000 to your campaign so that you can be better on initiatives concerning Wall Street. That's the difference.

On the importance of Hillary Clinton being a woman

Omara: Being the child of immigrants, knowing that Obama's father was an African, there is definitely an emotional impact to that. You look at Obama and you can see what's possible. And I think that is the same for Hillary Clinton. I think people can look at her and see what's possible for women in politics.

Castillo: I think because of my experience working with Latinas Represent, you definitely see the way in which women are unfairly told to tone it down. She's really had to — through her entire career — navigate how she's going to comport herself.

If you follow Twitter you can see it happening. When she raises her voice, people are like, "This is intolerable, we just can't even handle this." Whereas, it's a little bit more of a generous chiding [for] Bernie Sanders. It's like he's your grandfather yelling at you. It's absolutely a different tone.

Castillo: Obviously I would want to do the best for our party and make sure that we're mobilizing the vote. But I think it will be challenging to want to put the level of energy towards her campaign, especially given my prior experience.

Omara: I imagine myself doing what I can to make sure that a Democrat is elected. The Supreme Court's at stake. We've got a couple [justices] are who definitely getting up there in years.

I'm very concerned about where we're going politically in the country. And that is not a direction I want to see under Ted Cruz or Donald Trump or any of them. So whoever is the Democratic nominee — and in this case the only other person would be Bernie Sanders — I will be supporting and voting for him.