Accessibility links
In The Light Of The Morning After, How Bad Was Rubio's Repetition? "I would pay for them to keep running that clip, because that's what I believe passionately," Marco Rubio said of a much-aired video excerpt of him repeating a line at Saturday's debate.

In The Light Of The Morning After, How Bad Was Rubio's Repetition?

In The Light Of The Morning After, How Bad Was Rubio's Repetition? 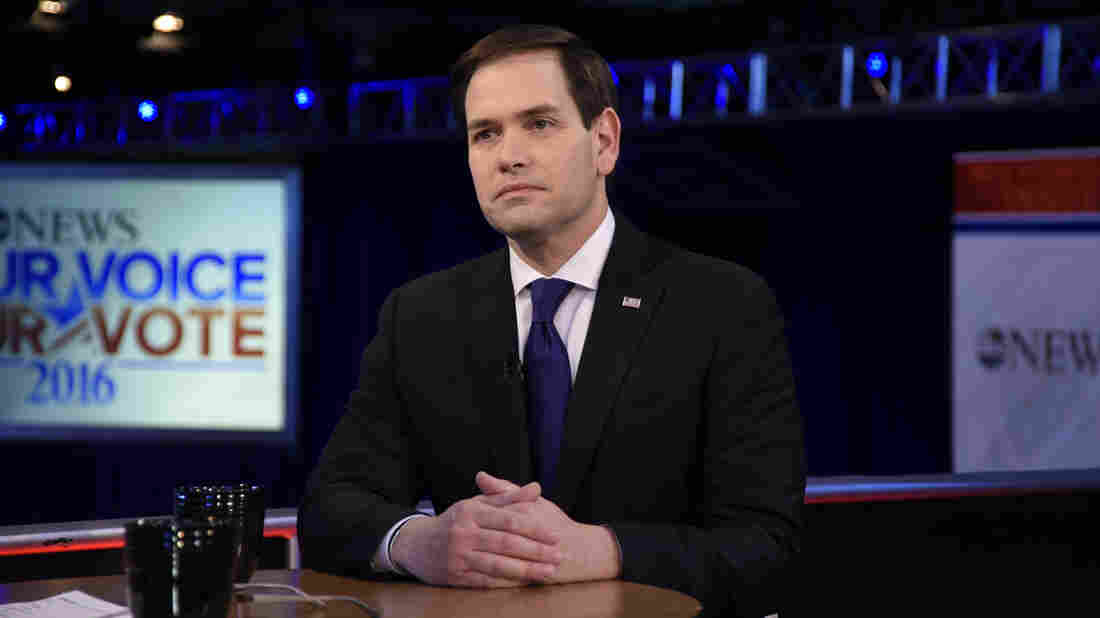 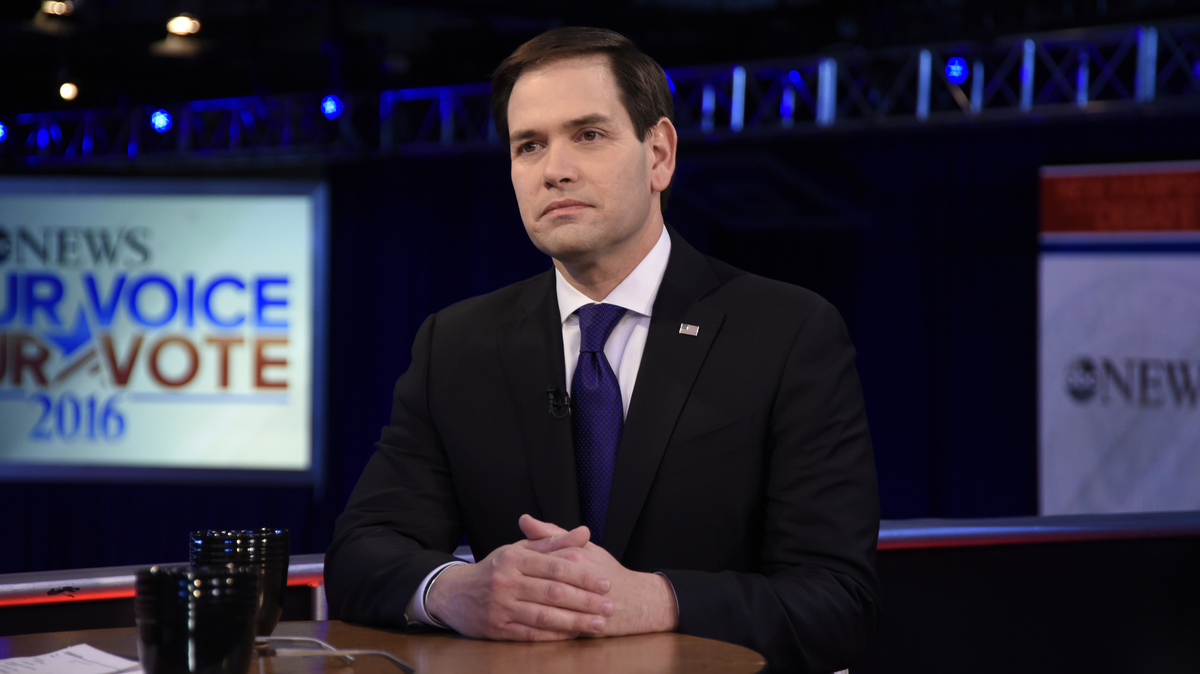 Sometimes it takes a Sunday morning to see how much damage was done Saturday night.

So it was this weekend, in New Hampshire and in the broader national conversation about the 2016 presidential race.

On Saturday night, many observers seized on the meatiest moment from the GOP debate staged here — perhaps the most salient moment of all the debates so far. It was the clash between Chris Christie and Marco Rubio that turned into a stunning exposé of Rubio's technique.

Still fixed on the mind's eye was the image of the young Florida senator repeating a single sentence almost verbatim, not once but several times — each time as if it had just popped into his head.

Christie, the New Jersey governor, who needs a breakthrough in New Hampshire to keep his flagging hopes alive, seemed to have drawn blood in a big way.

But in the new dawn, given the reality of the debates' limited audience and the general competition for voters' attention, the exact extent of the damage was less clear. Rubio's first event of the day drew overflow crowds showing both interest and enthusiasm. And he himself told George Stephanopoulos on ABC's This Week that he would pay the networks to show his repetitious sound bites again and again.

"I would pay for them to keep running that clip, because that's what I believe passionately," Rubio said. "It's one of the reasons why I'm not running for re-election to the Senate, and I'm running for president."

That line he'd pay to rebroadcast? In response to accusations that he lacked the depth of experience to be president and resembled the first-term senator who was elected in 2008, Rubio had said, "Let's dispel this notion that Barack Obama doesn't know what he's doing; he knows exactly what he's doing."

Rubio defended himself on ABC, saying that if "someone like that were elected for the next four years, it might be too late to turn America around."

At the opposite extreme of the issue was Christie, telling Jake Tapper on CNN's State of the Union that "the whole race changed last night" and that now Republicans "can't trust Marco Rubio to be the nominee of this party."

Jeb Bush, a former governor of Florida who functioned as Christie's tag-team partner against Rubio on Saturday, told Fox News Sunday host Chris Wallace that Rubio's deficits had been exposed. "He's a great speaker," Bush said, "but he's never had a chance to actually make a tough decision, like governors do."

But the rest of the candidates, who populated the Sunday news and talk shows, had other fish to fry — mostly having to do with their own campaign messages.

John Kasich, the governor of Ohio, who has invested his time in this state, gladly grabbed the share of the spotlight he had after the debate. Speaking to Tapper on CNN, Kasich asserted his conservative credentials.

"There's nobody who's balanced as many budgets as I have," Kasich said. He added that people saw him as moderate only because he had been willing to work with opponents in office.

Donald Trump appeared yet again with Chuck Todd on NBC's Meet the Press, reinforcing many of the points he had made just hours earlier on the debate stage.

He again said waterboarding should not be proscribed for anti-terrorism interrogators given that ISIS "chops people's heads off." In the debate, he had said he'd do "a hell of a lot worse" to prevent a terrorist attack. Trump also asserted that torturing subjects for information "works ... believe me."

Trump also repeated his view that he had not lost the Iowa caucuses, really, given the caucus-night tactics of the Ted Cruz campaign. Texas Sen. Cruz, who escaped the line of fire through most the latest debate, did not appear on any national news or talk shows on Sunday.

Ben Carson spoke to Maria Bartiromo on Fox's Sunday Morning Futures and expressed dismay with the last debate. Noting he had far less speaking time than the others (less than half as much as Rubio and Cruz), Carson said the format favors candidates who are mentioned by other candidates (giving them an opportunity to respond).

Carson said he would have liked a chance to explain his definition of conservatism. He also explained that he had stood in the wings for a while after being introduced because he had not heard his name called.

One other thing about the morning-after media attention was that the GOP contenders had to share it with their counterparts on the Democratic side. Bernie Sanders continued his run in the media sun, following up his cameo appearance on Saturday Night Live.

The humor was left behind, as Sanders sparred with Tapper on CNN and later with Todd on NBC. He said he was not overly reliant on polls that show him as much as 20 to 30 points ahead in New Hampshire (though others have shown a tighter race in recent days).

Sanders said his lack of investment in foreign affairs was less important than the judgment he showed in opposing the Iraq War more than a dozen years ago.

For her part, a remarkably cheerful Hillary Clinton made the rounds on the Sunday shows, chatting with Stephanopoulos, Todd and John Dickerson on CBS's Face the Nation about her expectations for Tuesday's primary, her superior preparation on foreign policy and her reaction to male commentators who say she shouts too much.

She also made the remarkable claim that her plan for regulating the financial industry made her tougher on Wall Street than Sanders, whose call to break up the big investment banks is the hallmark of his campaign.