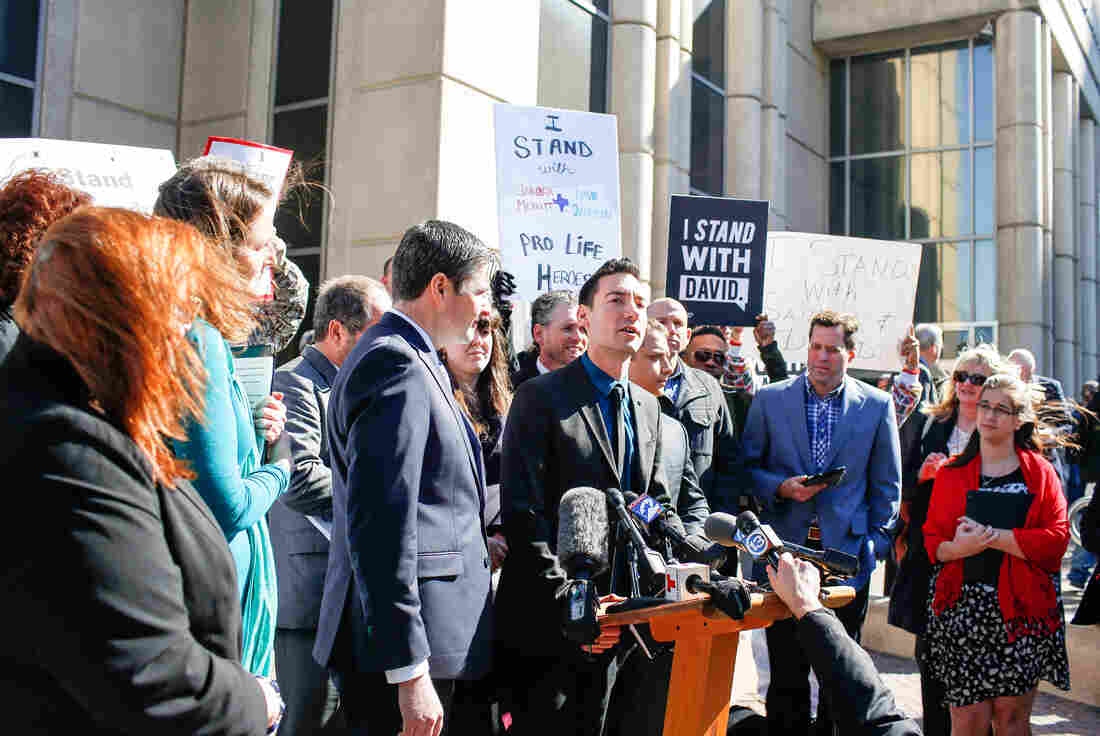 David Daleiden, a defendant in an indictment stemming from a Planned Parenthood video he helped produce, speaks to the media Thursday after appearing in court at the Harris County Courthouse in Houston, Texas. Eric Kayne/Getty Images hide caption 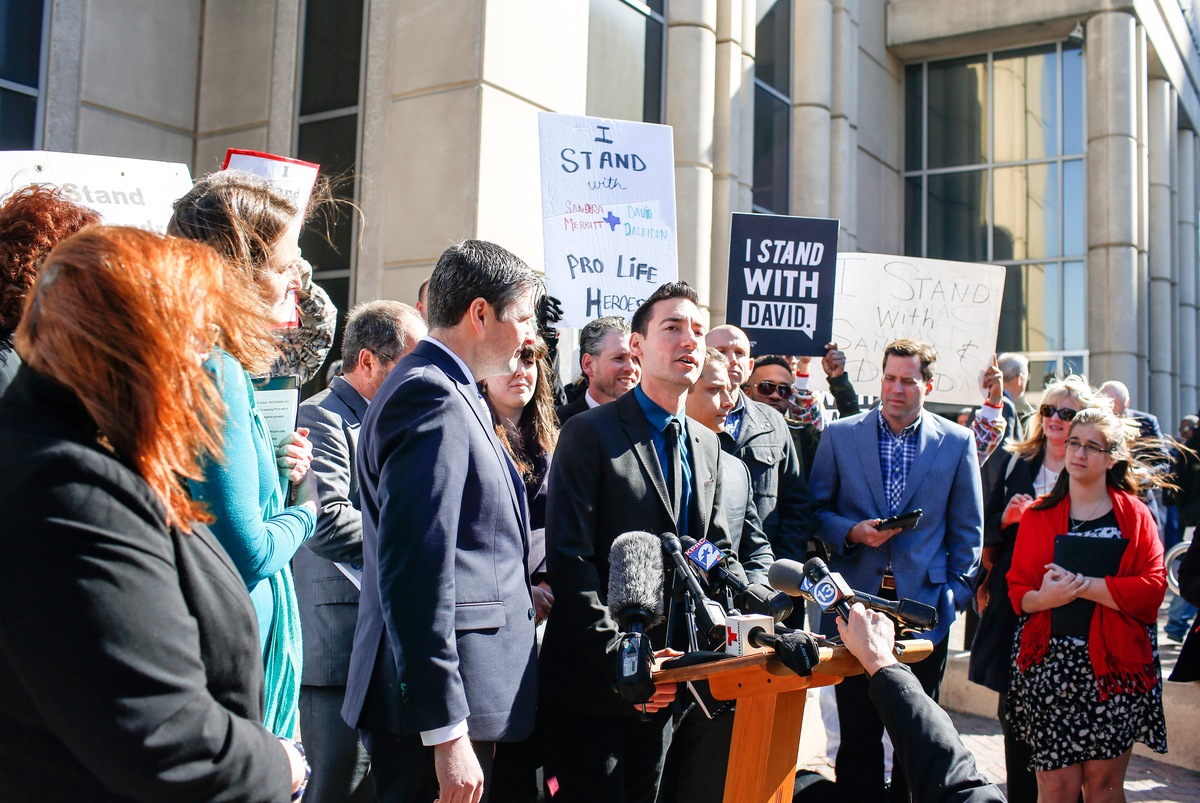 David Daleiden, a defendant in an indictment stemming from a Planned Parenthood video he helped produce, speaks to the media Thursday after appearing in court at the Harris County Courthouse in Houston, Texas.

The day David Daleiden turned himself in at the Harris County courthouse, the throng of media there was a good indication of just how much this indictment means to both sides of the abortion debate.

"It's outrageous that it's David that has to come and present himself to the court when it's Planned Parenthood who should be on trial today," Woodfill said. "The reality is David is a modern-day hero. He has exposed the wrongdoing that's been occurring in abortion clinics all across this country."

Daleiden faces charges that he tampered with a government record and attempted to purchase human organs. Houston prosecutors have offered him a deal for probation, which would expunge the charges if he stays out of trouble. But that was no sale for Daleiden's team of lawyers, including Terry Yates.

"The only thing we're going to accept right now is an apology," Yates says. Yates feels confident the judge will drop the charges before trial.

Daleiden's lawyers will argue that although their client admits to using a fake California driver's license, it's not a crime because he did so in the cause of investigative journalism. They'll argue the same First Amendment protection applies to the charges connected to Daleiden's email offer to buy fetal tissue from Planned Parenthood. But University of Texas law professor David Anderson says the courts have ruled on this defense.

"The Supreme Court and the lower courts have been perfectly clear that what the First Amendment protects is publication or disclosure of information. The First Amendment does not protect crimes committed in the course of newsgathering. Period," Anderson says.

The Houston grand jury's decisions have, for the moment, stopped the anti-abortion movement's political momentum against Planned Parenthood in its tracks. When they debuted, Daleiden's videos empowered Republican officeholders around the country to call for criminal investigations. That also happened in Texas when Texas Attorney General Ken Paxton asked fellow Republican District Attorney Devon Anderson to open a criminal investigation into Planned Parenthood in Houston. The clinic had been featured in Daleiden's videos.

"It became crystal clear that we needed to get to the table with the prosecutors and the law enforcement agents before anybody else beat us there," says Josh Schaffer, Planned Parenthood's defense lawyer in Houston. Instead of acting like the DA's office was the enemy, Schaffer threw open Planned Parenthood's doors and file cabinets to the police and Texas Rangers. And he urged them to acquire all the video that the young activist had shot and compare it to the final product.

"Well, they showed Mr. Daleiden attempting to bait the employee during the course of their meeting into being willing to do things that the law does not permit and that Planned Parenthood does not do," Schaffer says. "At the time he appeared green, naïve, about research protocol and regulations, but we know now that he was trying to scam them."

Republican Devon Anderson has become the anti-abortion community's Benedict Arnold. They accuse her of betraying her own anti-abortion convictions because of campaign contributions from abortion rights supporters.

"I think that she has shown that her biases have prevented her from being able to execute her duties in a proper way, and that's why we're calling for her resignation," says Cheryl Sullenger, senior vice president at Operation Rescue.

In her own defense, Anderson says the surprise indictments are nothing more than the grand jury following the trail of evidence uncovered by law enforcement. But for abortion opponents, the allegation that Planned Parenthood is selling fetal tissue for profit is indisputable fact. They're calling for Texas to appoint a special prosecutor and for a new investigation to proceed. Those cries are falling on sympathetic ears. Texas' governor, lieutenant governor and attorney general have all stated that the Houston grand jury's decisions will have no impact on the state's three ongoing investigations of Planned Parenthood.