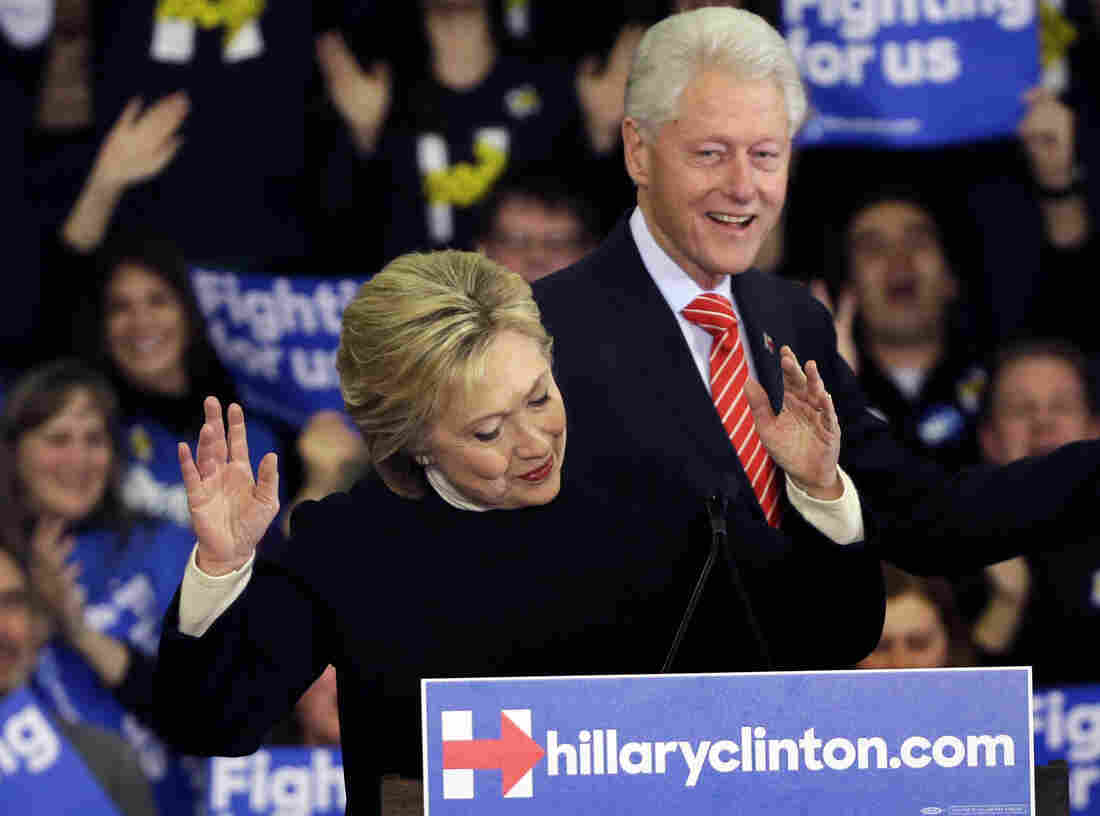 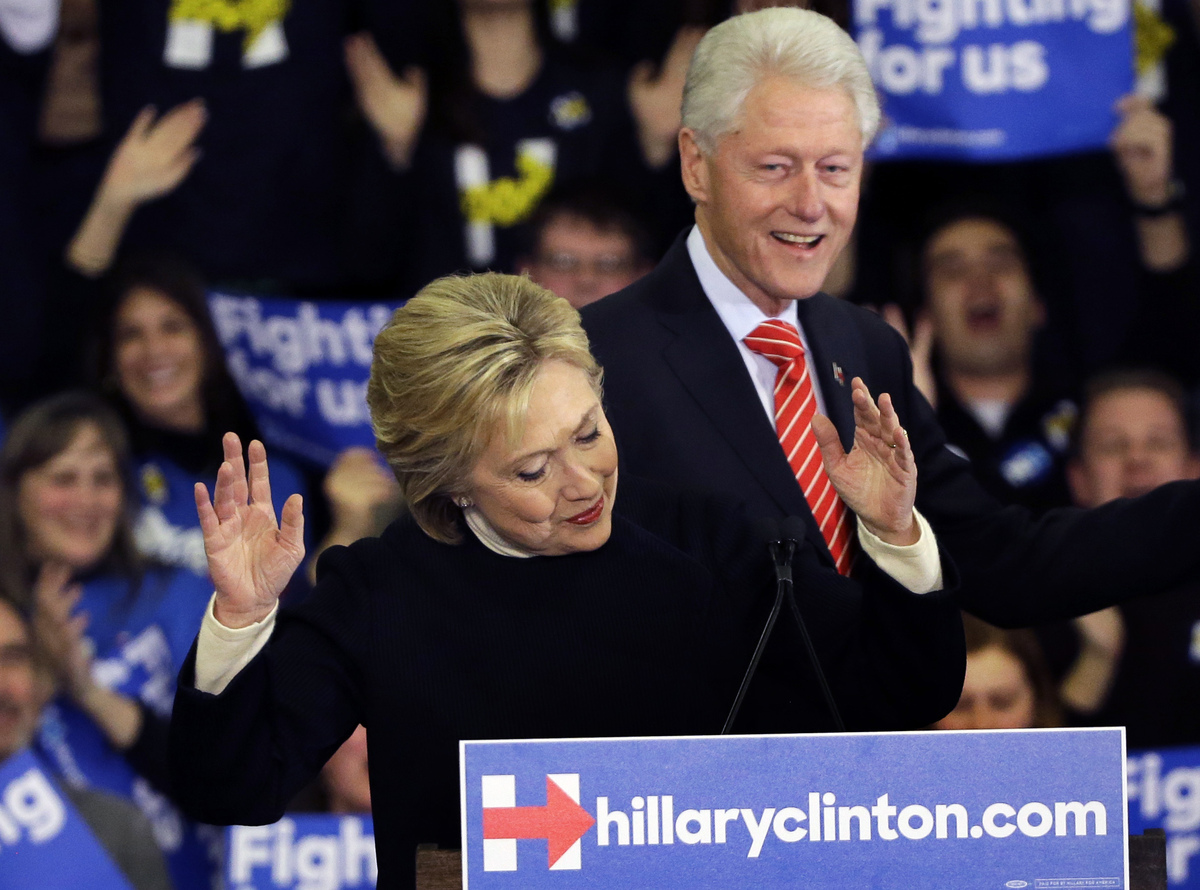 The broader results and exit poll data show there are still deep divisions in both parties, though. While the former secretary of state is looking toward South Carolina and Nevada for a rebound, some of the deep-seated problems she has may not go away. And while Republicans are battling to find the anti-Trump, the bombastic billionaire has deep and wide support that could be hard to quash.

Here are some of the top takeaways from the data behind last night's results.

1. Hillary Clinton has a woman problem

The Clinton campaign was trying to stop the hemorrhage of female voters — especially young women — from its camp in the closing days. Campaigning with Clinton on Saturday, former Secretary of State Madeleine Albright thundered, "There's a special place in hell for women who don't help each other!" — a phrase she has used before, but one that was specifically targeted at younger female voters who were wooed by Sanders. Feminist leader Gloria Steinem also stirred controversy when she suggested last week that younger women were supporting Sanders just so they could meet boys.

It turns out the Clinton campaign's fears were right. According to exit polls, women made up 55 percent of the New Hampshire electorate — and they favored Sanders by 11 points.

Many have described a disconnect between generations as one of the reasons Clinton, who would be the first female president, does not have a monopoly on female voters. Younger women tend to think gender barriers aren't a hurdle anymore, while older women have more sympathy for Clinton and the criticism she has received over the years.

But if Sanders continues to energize younger voters with his message of radical changes to stop economic inequality, women could continue to move toward the 74-year-old Vermont senator.

Democrats fretted early on in Clinton's candidacy about her high negatives in polls. Respondents said they didn't see her as someone who cared about them or someone who could be trusted. Months later, the campaign's worries are proving correct.

A 34 percent plurality of voters said whether a candidate is honest and trustworthy mattered most to them — and among those voters, Sanders thumped Clinton 91 percent to 5 percent.

Twenty-six percent of voters said whether a candidate cared about them decided their vote — Sanders carried that bloc 82 percent to 17 percent.

In the end, how bad was it for Clinton? She carried only four precincts out of 300 and received fewer votes in New Hampshire than she did in 2008, when she won the primary.

We've heard it for months: The public is fed up with politicians, big money in politics, income inequality, political correctness and more. Tuesday night's results in the "Live Free or Die" state bore that out in both parties.

On the GOP side, where Trump rode that anger to a victory that just months ago seemed implausible, 40 percent of voters said they were angry at how the federal government was working. Trump won 42 percent of those voters — the next closest was Texas Sen. Ted Cruz, who earned support from 15 percent.

Trump, who has no filter when it comes to attacking opponents, projects a tough-guy persona, and it's one voters are buying. He handily carried women and other voters young and old.

That outrage isn't just a GOP hallmark, though: Sixty-one percent of Democratic voters said they were dissatisfied or angry with the federal government — and those voters broke for Sanders by a 42-point margin.

4. There's a big education gap within the GOP

Trump is drawing much of his support from voters who have only a high school education. Trump dominates his next closest rival in that demographic, Texas Sen. Ted Cruz, earning 46 percent to Cruz's 13 percent.

Trump does lead voters with higher education degrees, too, but it narrows to just a 14-point gap.

If you talked to voters in New Hampshire over the last few days, you kept hearing one thing — "I'm still undecided." Even the day of, many voters said they didn't decide until they entered that ballot booth.

Polls confirm those impressions: Forty-six percent of Republicans said they made up their minds just within the last few days, compared with just under a quarter for Democrats.

Who benefited from the late surge? Among voters who decided on Tuesday, Trump still won, but Kasich was a strong second.

Some of those decisions were influenced by Saturday night's GOP presidential debate, where Florida Sen. Marco Rubio performed poorly, by his own admission. Just over half of voters said the recent debates were important in deciding.

Trump again won those voters, and Kasich was second. One person the debates didn't help, though, was New Jersey Gov. Chris Christie. He was the attack dog against Rubio, but despite spending millions in the state, Christie finished a disappointing sixth and will be dropping out of the race, a source close to Christie told WNYC's Matt Katz Wednesday. Christie canceled his planned trip to South Carolina, instead heading back to the Garden State to reassess his candidacy.