Accessibility links
Dogs' New Challenge: Find A Bomb Before It Becomes A Bomb Humans rely on dogs to search for bombs. But the increasingly common improvised explosive devices can be made with ordinary ingredients — and that is posing a new challenge for bomb-sniffing dogs. 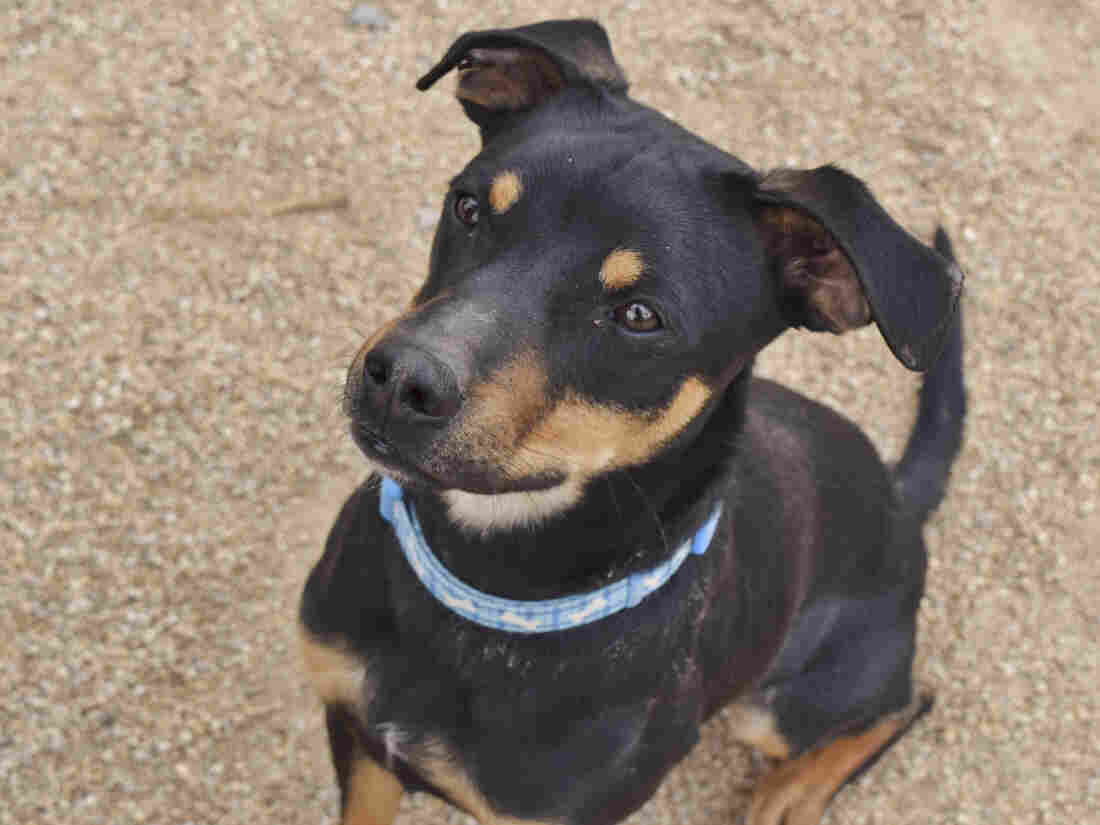 Shelter dog Rohan takes a break from his scent detection trials to play outside. Rohan is one of several dogs training to detect homemade bombs at the Canine Science Collaboratory at Arizona State University. Jimmy Jenkins/KJZZ hide caption 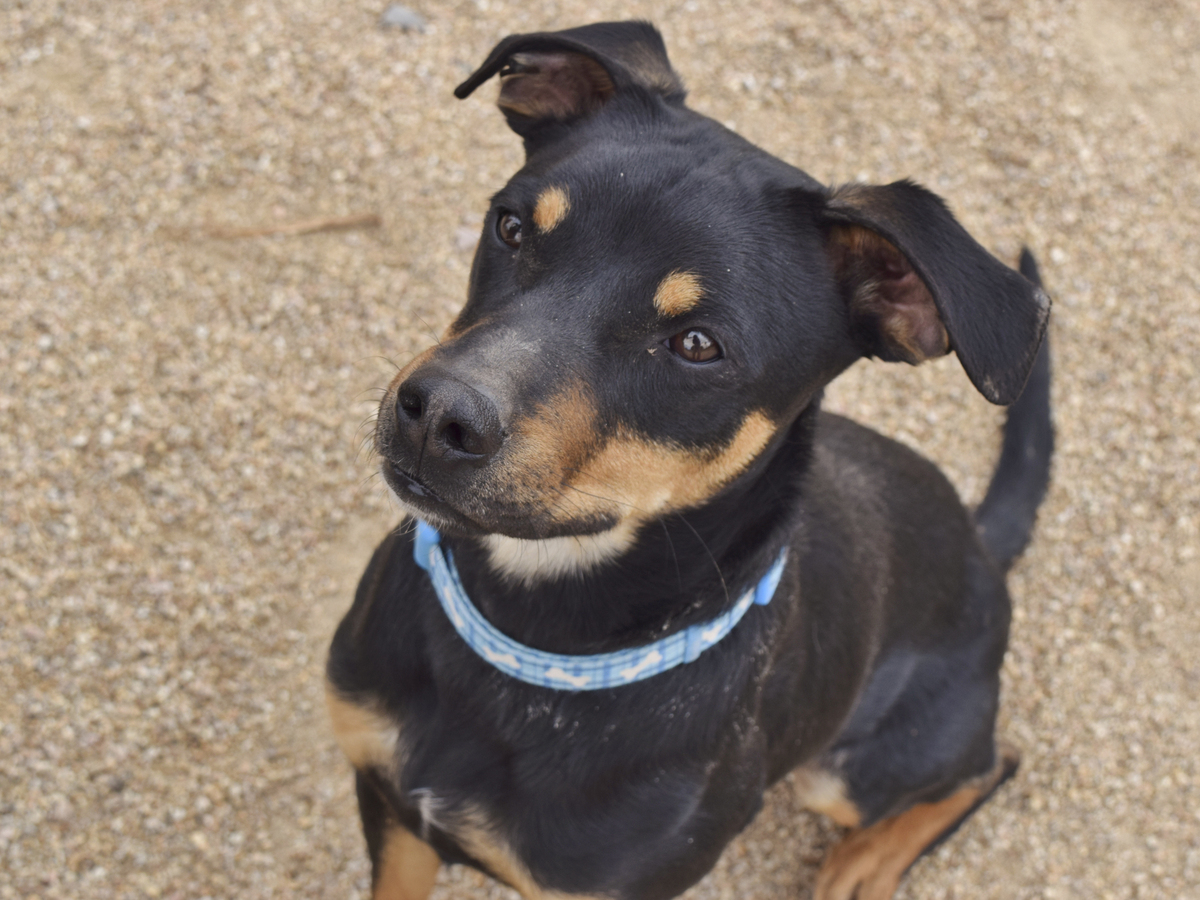 Shelter dog Rohan takes a break from his scent detection trials to play outside. Rohan is one of several dogs training to detect homemade bombs at the Canine Science Collaboratory at Arizona State University.

Humans have long turned to the dog for its nose, especially in its ability to hunt, track missing people and search for drugs.

But there is a new challenge: Bomb-detecting dogs have to now learn to find the increasingly common improvised explosive devices (IED) that can be assembled from ingredients that are not dangerous by themselves.

"So we're now asking dogs not just to find a needle in a haystack, now the problem is more like saying to the dog 'we need you to find any sharp object in the haystack,' " says Clive Wynne, a professor at Arizona State University.

Wynne directs a study funded by the Office of Naval Research that develops methods to train dogs to identify a wide variety of ingredients that could be used to make bombs.

The dogs not only have to detect whether explosive ingredients are present — they also have to determine whether the agents they smell could combine to form an explosive mixture. 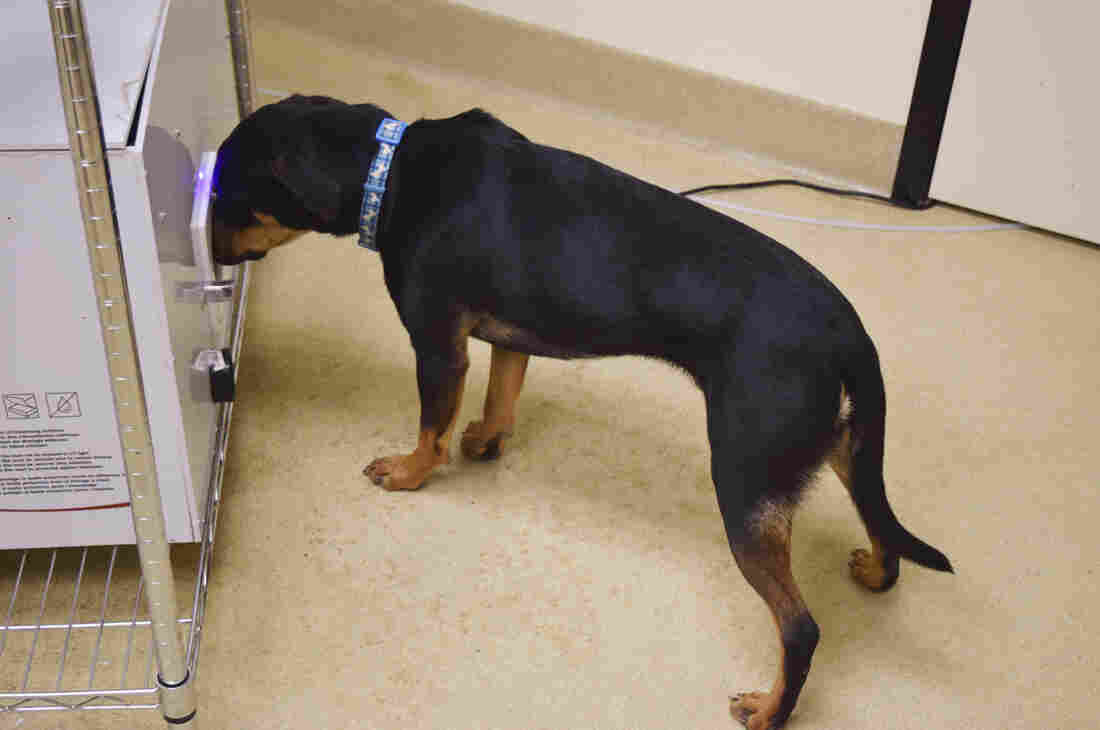 Rohan puts his nose in the olfactometer to detect a scent presented by the computer. Jimmy Jenkins/KJZZ hide caption 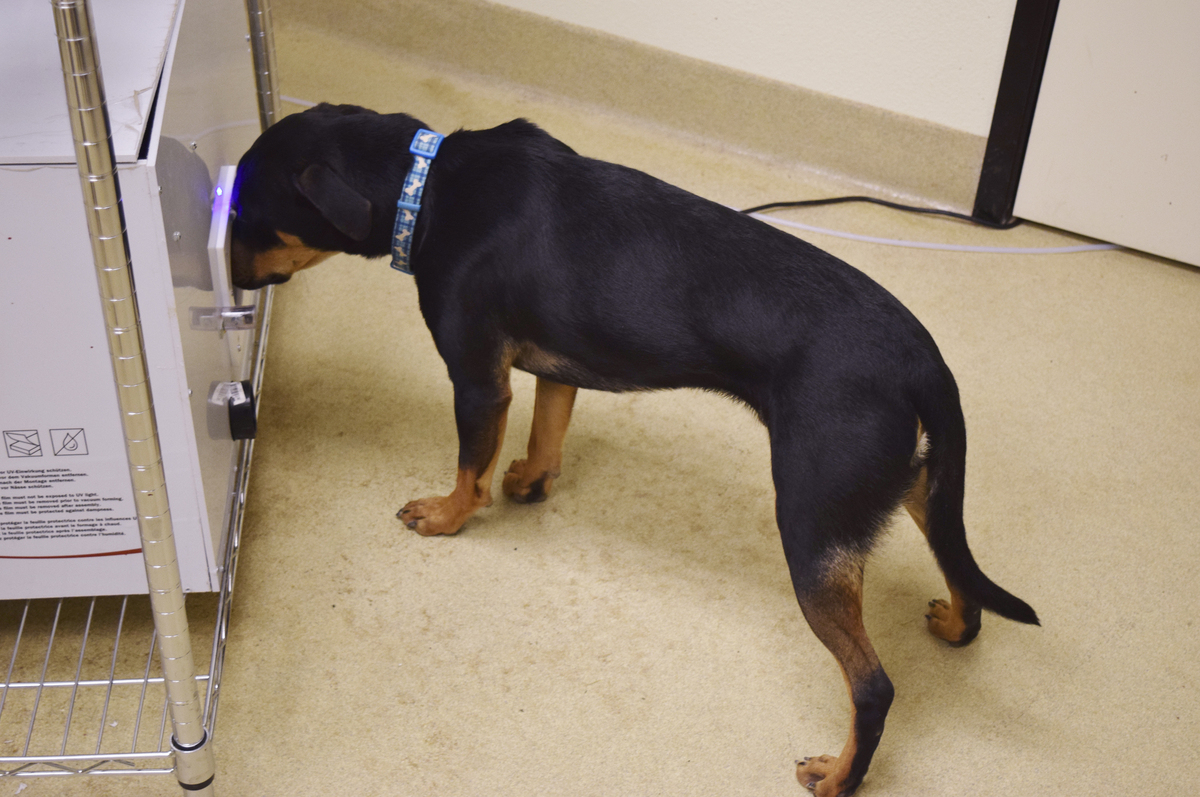 Rohan puts his nose in the olfactometer to detect a scent presented by the computer.

Rohan, a small, black and brown shelter dog with perky ears and intent eyes, is one of the canine trainees at the Canine Science Lab on the campus of Arizona State University.

For training, Rohan puts his pointy, black nose into a machine called an olfactometer that can present thousands of scent mixtures — everything from vanilla to ammonium nitrate.

In Cambodia, Rats Are Being Trained To Sniff Out Land Mines And Save Lives

"He's keeping his nose in and he gets food for that. That was a correct hit. That was a hit response. The odor was there, he made the correct indication," says researcher Nathan Hall as he watches Rohan go through the process. Hall is part of the research team.

Wynne says history shows that some of those ingredients don't seem dangerous at all.

"I grew up in Britain, and when I was a child there was a series of terrorist attacks on Britain and I only recently learned that the critical explosive fuel was confectioner's sugar," Wynne says. "Now, would there be a purpose in training dogs to find confectioner's sugar? Obviously not."

But Wynne says the dogs need to learn that when combined with other elements, even sugar could be used in a bomb. 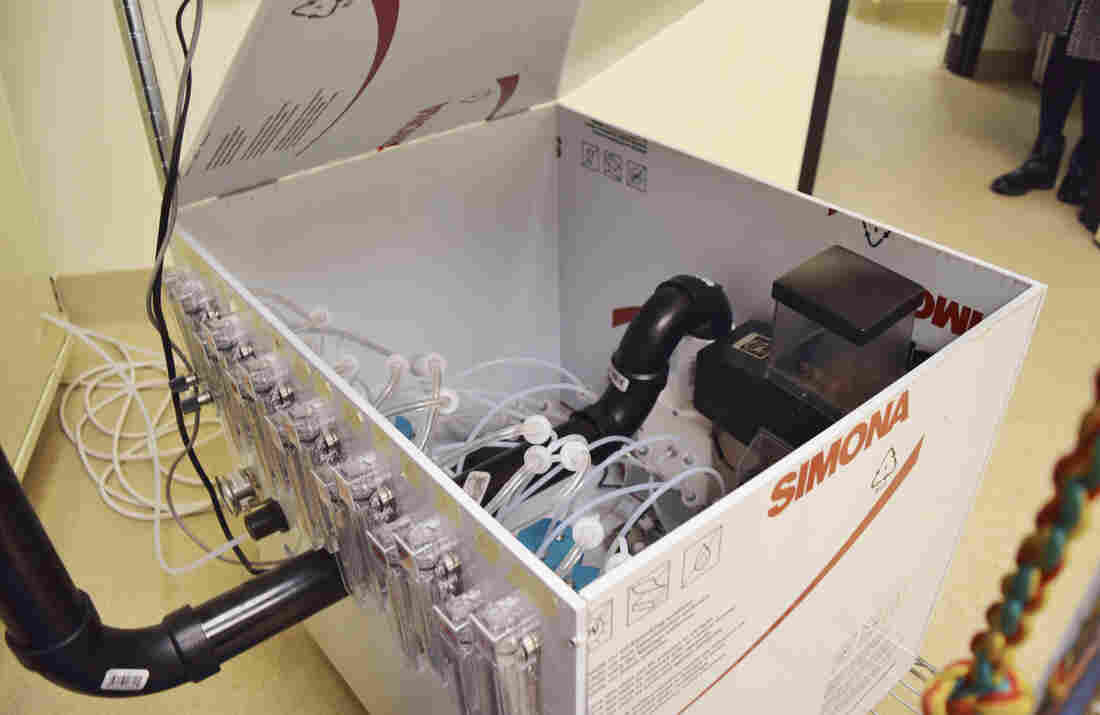 An air pump controlled by a computer creates a mixture of scents from various samples inside the olfactometer. Jimmy Jankins/KJZZ hide caption 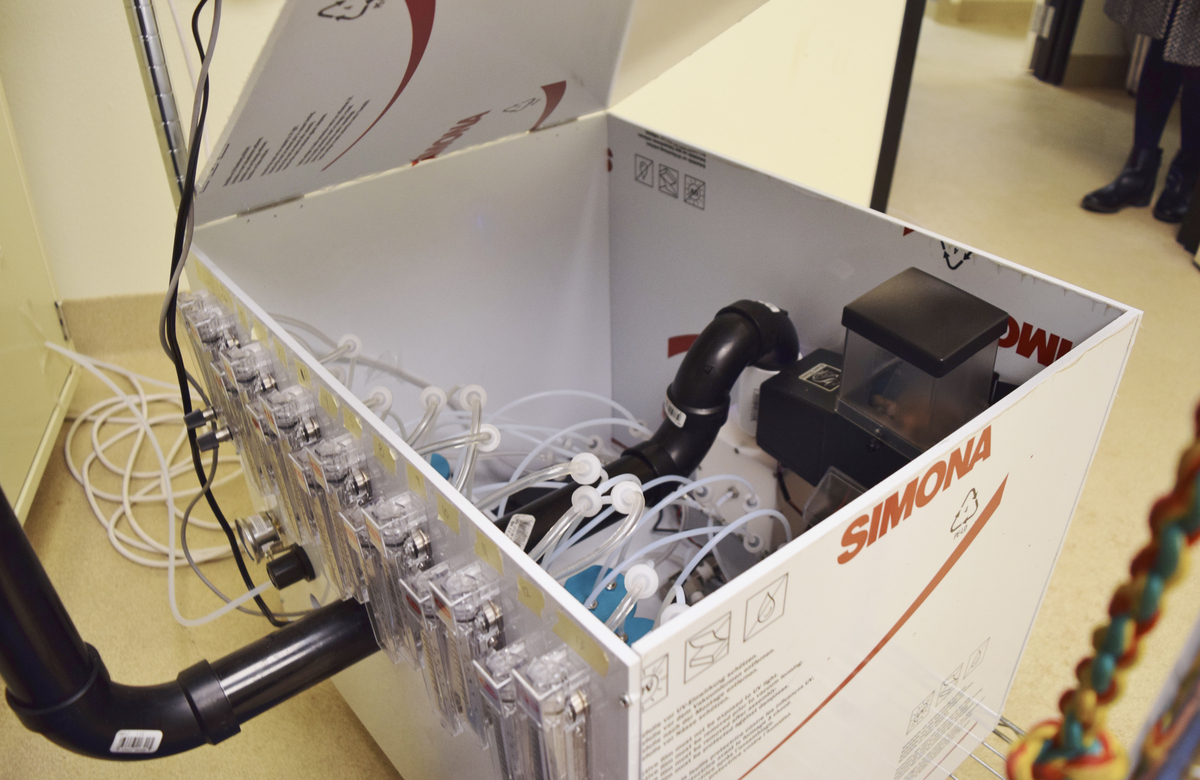 An air pump controlled by a computer creates a mixture of scents from various samples inside the olfactometer.

It's a much different approach than just teaching dogs to detect explosives like C4 or TNT. Joong Kim is a program manager with the Office of Naval Research. He says dogs used by the Marines are having a difficult time finding roadside bombs in Iraq and Afghanistan.

"Their components can be in a different ratio, a different quality and that does seem to have some effect on the performance of the canine," Kim says. "That variation is actually the challenging part of being able to identify and locate those threats."

He says the big problem is that IEDs are just that — improvised and completely inconsistent.

Wynne says Rohan's nose is more than a thousand times more powerful than a human's nose.

"In the United States, defense research agencies spent billions of dollars over the last 15 years trying to create a technical replacement for the nose of the dog, and at the end of all that they just had to admit 'No, we cannot get close,'" Wynne says.

He thinks his team can develop bomb-sniffing dogs that can detect IEDs at a fraction of that price. All it takes, he says, is patience and a little positive reinforcement.