Accessibility links
Cliven Bundy's Arrest Caps Years Of Calls For Government To Take Action The Nevada rancher's arrest is a setback for his self-styled militia supporters and their anti-federal lands fight. The charges stem from a standoff with federal agents at his ranch in 2014. 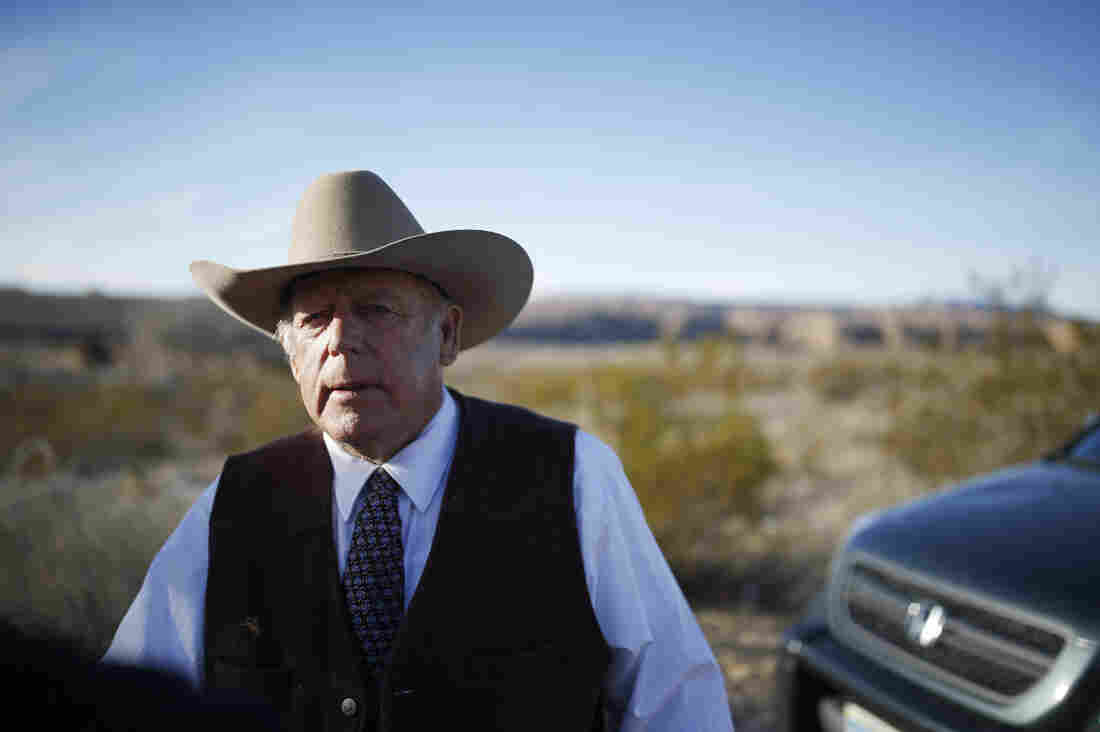 Cliven Bundy stands along the road near his ranch after speaking with media in Bunkerville, Nev., on Jan. 27. His sons led the occupation of the Malheur National Wildlife Refuge in Oregon, and he was arrested Wednesday on charges stemming from a 2014 standoff with federal agents. John Locher/AP hide caption 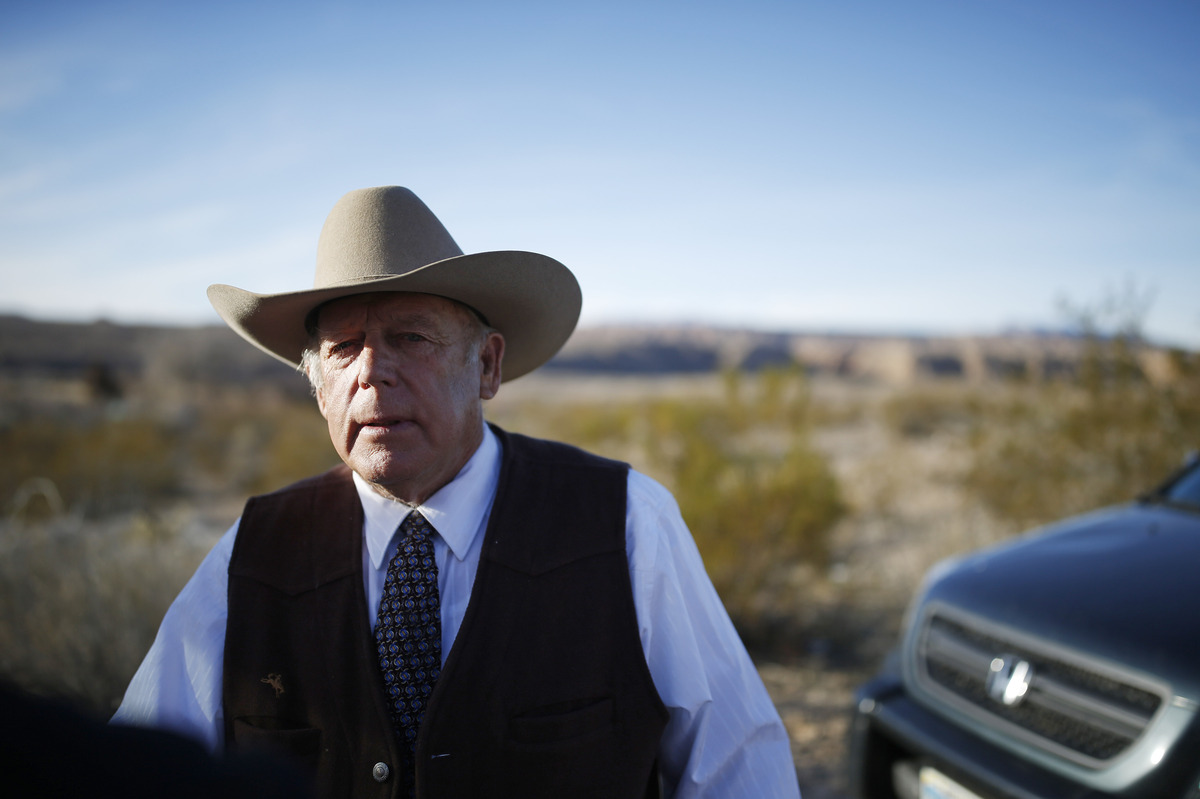 Cliven Bundy stands along the road near his ranch after speaking with media in Bunkerville, Nev., on Jan. 27. His sons led the occupation of the Malheur National Wildlife Refuge in Oregon, and he was arrested Wednesday on charges stemming from a 2014 standoff with federal agents.

The defiant leader of the anti-federal lands movement, Nevada rancher Cliven Bundy, is now facing multiple felony charges — including conspiracy and assault on a federal officer — in the 2014 standoff at his Nevada ranch.

Bundy, who inspired the occupation of Malheur National Wildlife Refuge, was arrested at the airport in Portland, Ore., Wednesday night, apparently on his way to Malheur.

In a 32-page criminal complaint, prosecutors allege Bundy and his co-conspirators led a massive, armed assault against federal officers in April 2014 near the town of Bunkerville, Nev.

Cliven Bundy Is Charged With Conspiracy And Extortion

U.S. Agency Backs Down In Standoff With Cattle Rancher

According to the U.S. attorney for Nevada, Bundy and his armed supporters on horseback effectively ambushed federal Bureau of Land Management officials as they were trying to round up 400 of Bundy's cows illegally grazing on federal land.

The tense dispute ignited a fierce debate over federal land management and cattle grazing that continued for the past month in Oregon. But Bundy's self-described "range war" has always been about more than cows.

That hot summer day, Bundy sat between two bodyguards. Photos of his 14 children and framed Mormon scripture hung on the wall behind him.

"[Federal authorities] was acting like an army coming against 'we the people,' " Bundy said at the time.

"We the people" is a constant Cliven Bundy refrain. He has flouted federal grazing laws and four prior court orders because he believes his Mormon ancestors arrived in the region and claimed a "right" to this land, predating the federal territories — an argument often disputed by historians who study the American West.

Bundy owes the federal Bureau of Land Management, or BLM, more than $1 million in leases and fines.

After the 2014 standoff, Bundy enjoyed a few weeks in the national spotlight, and was a darling of some talk show hosts. Most distanced themselves from the rancher when a video surfaced of him espousing racist views about the African-Americans he said he's came into contact with in nearby Las Vegas.

"I've often wondered, were they better off as slaves, picking cotton, having family life and doing things, or are they better off under government subsidy?" Bundy said in the video, apparently filmed a few days after the 2014 standoff. 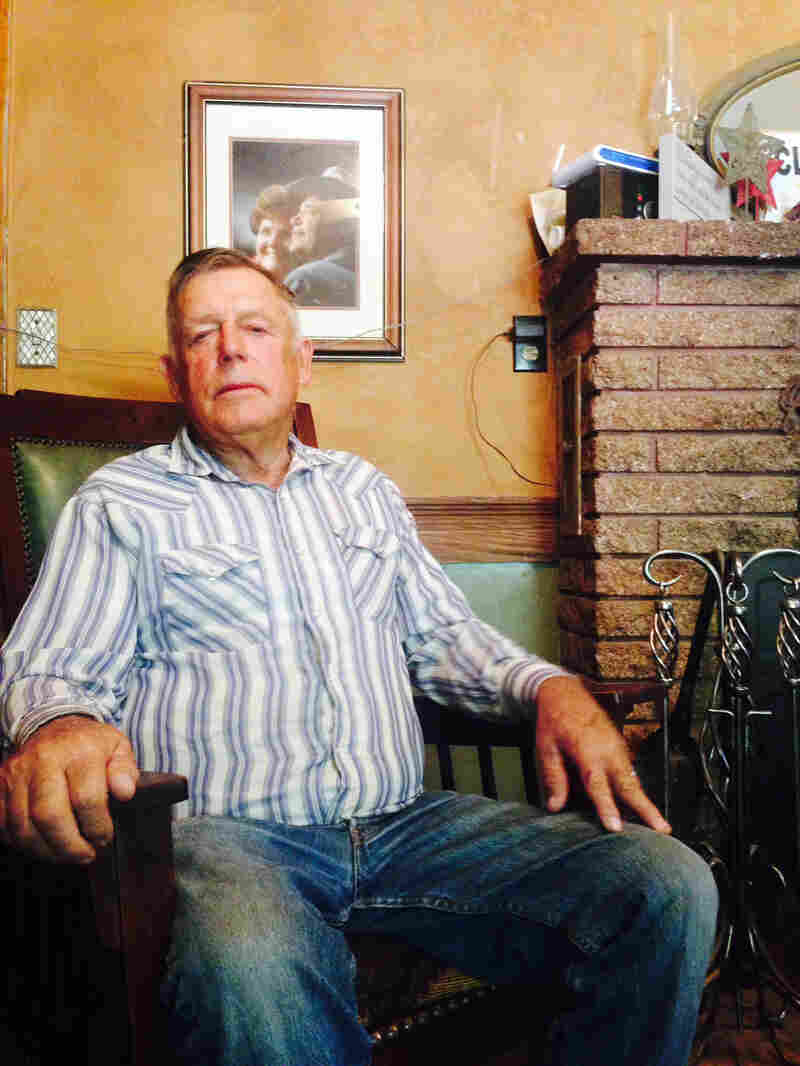 Bundy at his home outside Bunkerville, Nev., in 2014, a few months after the standoff with federal agents. Kirk Siegler/NPR hide caption 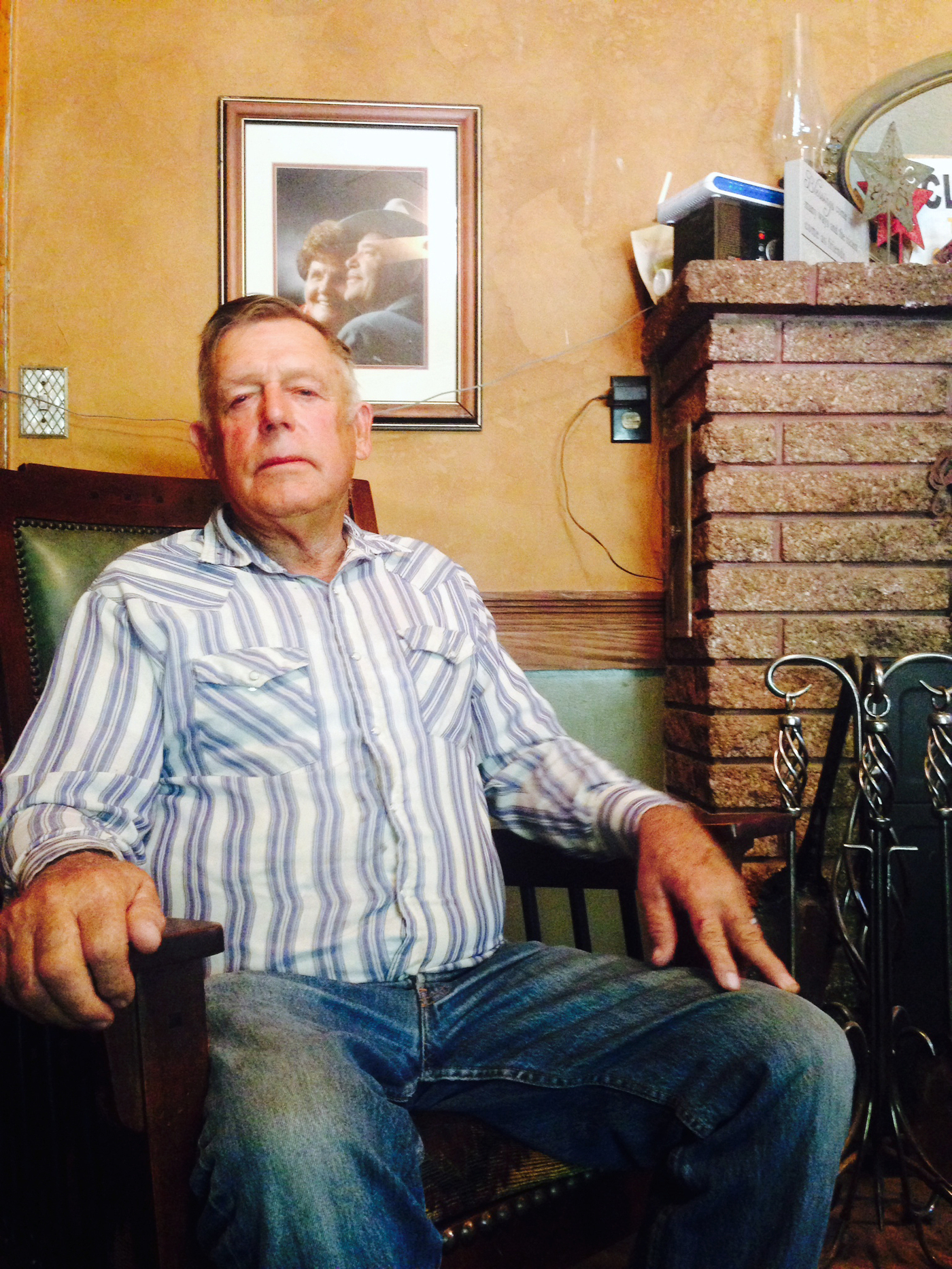 Bundy at his home outside Bunkerville, Nev., in 2014, a few months after the standoff with federal agents.

But after all the attention started to fade, the federal government still didn't act against Bundy. The BLM completely pulled out of the region, and Bundy and his supporters declared victory — until Wednesday night.

"I've been waiting for this for a long time," says Alan O'Neill, a retired park superintendent at Lake Mead National Recreation Area, which spans the Arizona-Nevada border near Bundy's ranch.

O'Neill's first brushes with Cliven Bundy's defiance began in the late 1990s, when Bundy's cows were illegally grazing on park service land. He said there was a plan in place to remove them, but it was stopped back then at the last minute because the federal government worried about another Waco.

"I thought that the government should have moved quicker on Cliven Bundy, but I'm just happy that they did," O'Neill says.

It's not clear how Bundy's arrest will affect his followers and the larger anti-federal lands movement. Reached by cellphone on Wednesday before she began negotiating with the Oregon occupiers and encouraging them to surrender, Nevada state Rep. Michele Fiore was as defiant as ever.

"Across the Western states, this is a pattern of behavior where the BLM has literally become a bureaucracy of terrorism," she said.

If convicted, prosecutors say, Cliven Bundy faces up to 42 years in prison and fines up to $1.5 million.