Accessibility links
'Strategic Patience' Pays Off For FBI During Wildlife Refuge Occupation Court documents and an NPR interview with one of the arrested occupiers tell a story of federal agents biding their time, collecting evidence against the group occupying the refuge in Oregon. 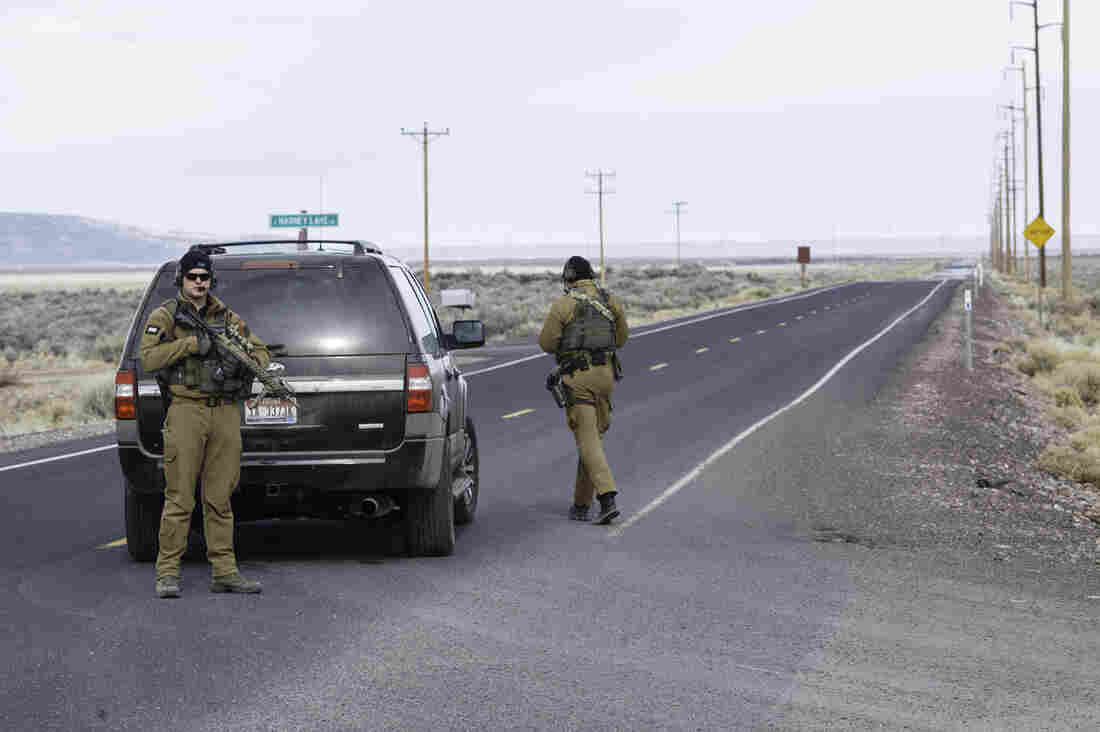 FBI agents close a stretch of road near the Malheur Wildlife Refuge Headquarters on Thursday. The FBI surrounded the last protesters holed up there amid reports they will surrender. Rob Kerr/AFP/Getty Images hide caption 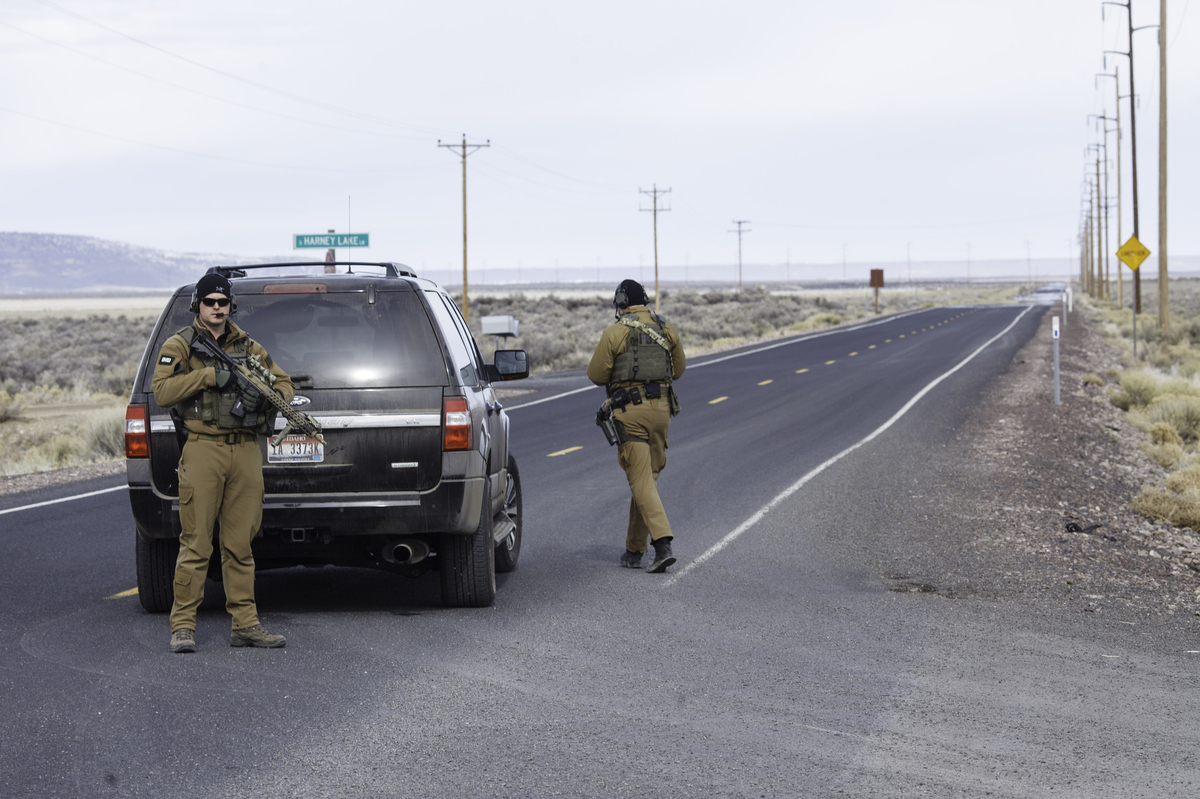 FBI agents close a stretch of road near the Malheur Wildlife Refuge Headquarters on Thursday. The FBI surrounded the last protesters holed up there amid reports they will surrender.

During the nearly five weeks of the occupation of the Malheur National Wildlife Refuge in Oregon, the FBI kept a low profile, and it attracted some criticism for being too easy on the militants. But the feds' low-key profile concealed a deliberate strategy, one that evolved during an earlier round of confrontations with anti-government protesters in the 1990s.

Robin Montgomery was the special agent in charge of the Oregon office of the FBI during that era, and he was involved in standoffs such as Ruby Ridge and the Montana Freemen. He says the FBI learned from those experiences to take a softer approach.

"You wait it out and you dress down. You don't need to have a bunch of military paraphernalia, out and about," he says.

Keeping a low profile doesn't mean nothing is happening behind the scenes. After Ammon Bundy and other leaders of the occupation were arrested Jan. 26 on a stretch of lonely road, court documents revealed that the FBI had spent the preceding weeks gathering evidence against them (read the criminal complaint). By allowing the militants the freedom to come and go and make statements to the media, the FBI had given them just enough rope to hang themselves, legally.

Montgomery says this "strategic patience" approach also seeks to defuse tension. In the '90s, he learned the value of finding intermediaries who were sympathetic to the people on the other side of the standoff, such as Bo Gritz, who became a mediator at Ruby Ridge.

"We had folks doing that, that also had issues with the government," Montgomery says, "so that there was a connection made, and you worked through that."

At the Malheur National Wildlife Refuge, that person appears to have been Franklin Graham, the conservative son of evangelist Billy Graham. After the occupation ended Thursday, the FBI's special agent in charge, Greg Bretzing, said Graham had been softening up the last holdouts over the phone. 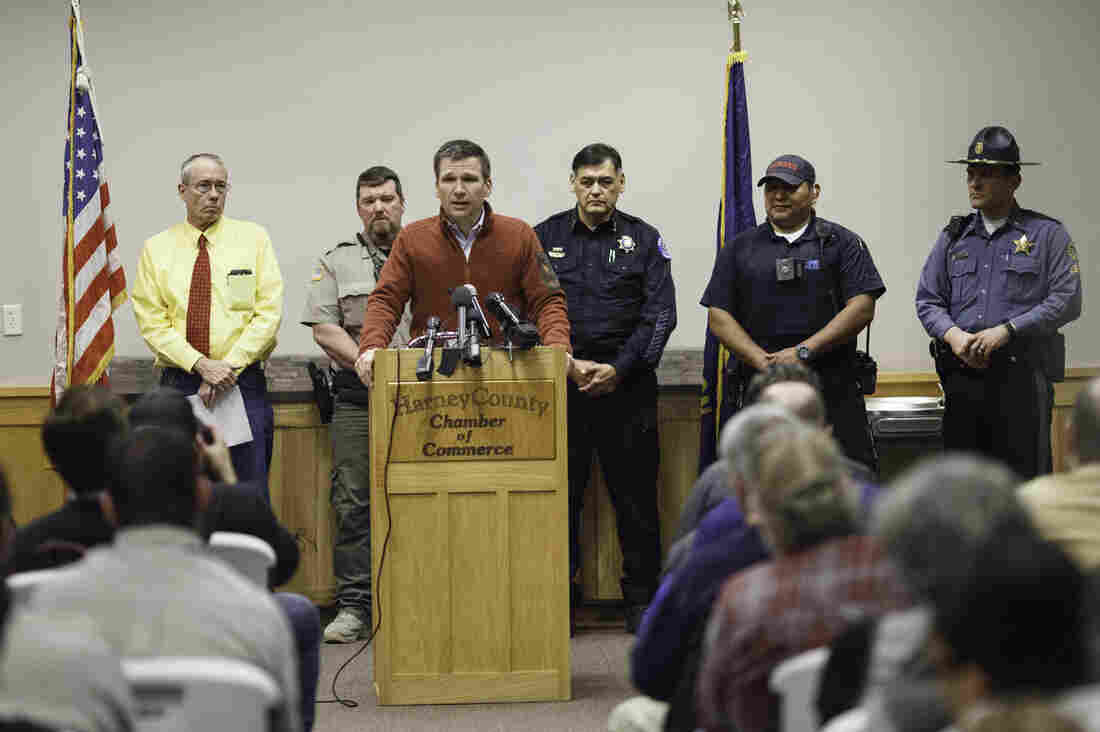 FBI Special Agent Greg Bretzing addresses the public at the Harney County Chamber of Commerce in Burns, Ore., on Thursday after the last four armed occupiers of a wildlife refuge turned themselves in. It ended a tense 41-day standoff over grazing rights on federal land that left one dead. Rob Kerr/AFP/Getty Images hide caption 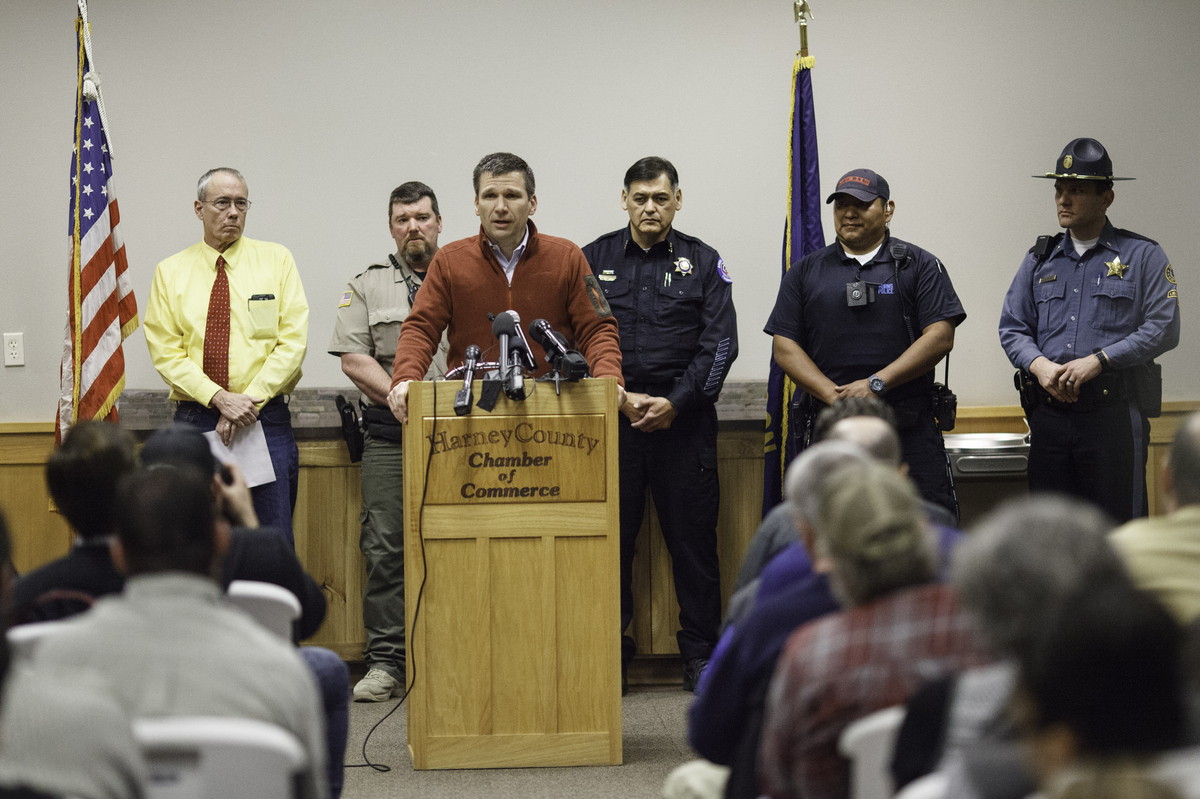 FBI Special Agent Greg Bretzing addresses the public at the Harney County Chamber of Commerce in Burns, Ore., on Thursday after the last four armed occupiers of a wildlife refuge turned themselves in. It ended a tense 41-day standoff over grazing rights on federal land that left one dead.

"He spent well over a week speaking to those on the refuge, and helping them work through their issues so they could come to a point where they were ready to leave of their own volition," Bretzing said.

The FBI also sometimes uses techniques that are more cloak-and-dagger. Montgomery says in his day, "cooperating witnesses" were a legitimate tool. Many of the militants who occupied the wildlife refuge are convinced something like that happened to them, in the form of an FBI mole.

The target of their suspicions is a man who goes by the name Mark McConnell, who joined the occupation early on and was in the militants' convoy that was pulled over by the authorities on Jan. 26. Almost everyone in the convoy was arrested and sent to jail in Portland, but McConnell was set free. Within hours, he was posting videos calling on other people in the anti-government movement not to believe inflammatory reports about what had just happened — particularly the report that the militant who died at the scene, LaVoy Finicum, had been shot by the FBI as he was trying to surrender.

In one of those same videos, McConnell acknowledged the suspicions swirling around him on the Internet.

In the video, he said he hadn't been sent to jail because he'd been careful not to be quoted in the media, and the authorities had no evidence against him.

But many people who supported the militants are convinced he was at least cooperating with the government.

"Mark McConnell we believe was a federal informant," says B.J. Soper, one of the founders of a regional activist group called the Pacific Patriots Network. "It's pretty interesting that he'd been [at the refuge] for weeks, and he's free to go."

Shawna Cox is one of the militants who did go to jail on Jan. 26, and she says she also had her suspicions about McConnell during the occupation. "He was very bold and kind of a demanding sort of person and tried to manipulate things."

Those who were on the refuge say they don't know how to reach McConnell, now, and he hasn't responded to a Facebook message from NPR.

Whether or not McConnell was connected to the FBI, the mere possibility just amplifies the general atmosphere of mutual suspicion that can haunt a standoff like this. As the authorities closed in on Wednesday night, Sean Anderson, one of the final four occupiers at the refuge, railed against sympathetic groups that had failed to come to the militants' rescue.

"Where's our PPN [Pacific Patriots Network] and where's our Idaho Three-Percenters," he demanded during a phone call. "And the Oathkeepers? They're all infiltrated with FBI agents!"

It appears the FBI tried to exploit the militants' sense of betrayal. Sean's wife, Sandy Anderson, reported over the phone that, "They're telling us that all the militia abandoned us!"

Isolation is a powerful closing tool for law enforcement in a standoff. By Thursday morning, the occupation was down to a single militant, a 27-year-old man from Ohio named David Fry. After the others surrendered, he dug in, insisting he couldn't give up. But after another hour and a half of tense negotiations, he relented. Later that day, Special Agent in Charge Bretzing theorized that Fry gave up because, "he was able to look around and notice that he was there by himself."