Accessibility links
Genya Ravan, 'Rock And Roll Refugee,' Has Stories To Fill Two Lifetimes Ravan came to the U.S. as a refugee of postwar Europe, learned English listening to the radio and, before long, heard herself on it. Her life in pop and rock is the subject of a new off-Broadway show. 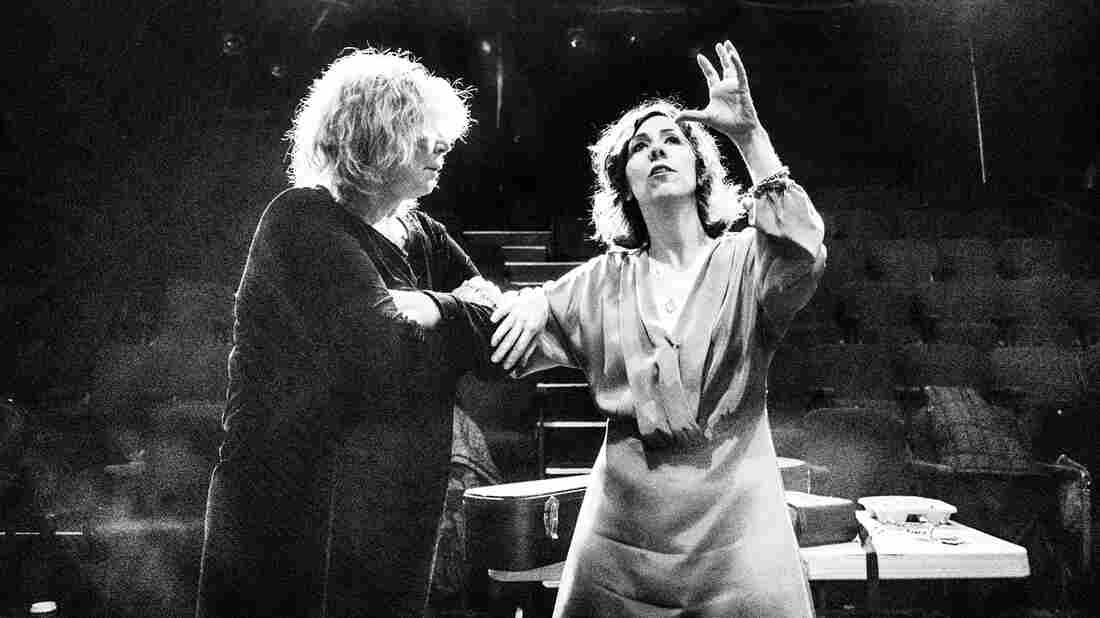 Genya Ravan (left) and director Chris Henry on the set of Rock and Roll Refugee, a new off-Broadway play about Ravan's early life in music. Shannon Rednour/Courtesy of the artist hide caption 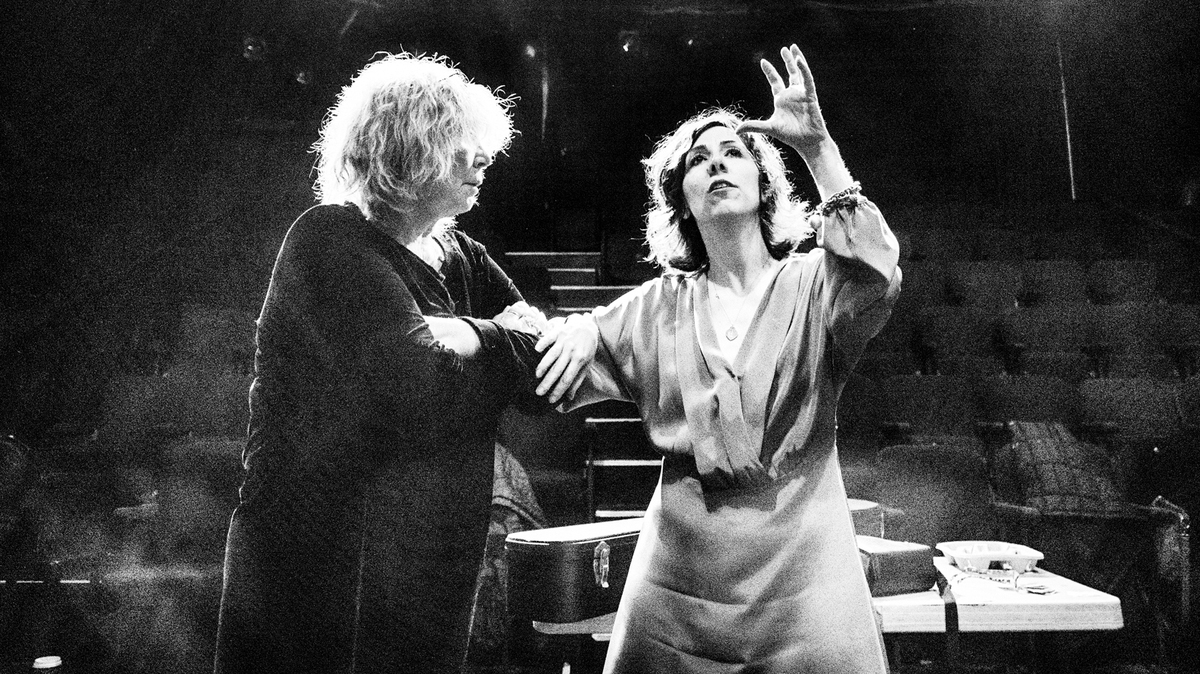 Genya Ravan (left) and director Chris Henry on the set of Rock and Roll Refugee, a new off-Broadway play about Ravan's early life in music.

Shannon Rednour/Courtesy of the artist

Genya Ravan's name has always been a hurdle: Strangers tend to stress the wrong syllable, or reduce it to something more conventional. (Jimmy Fallon once casually referred to her as "Gina.")

Ravan was actually born Genyusha Zelkowitz, to a family in war-torn Poland. By the time she left for America in 1947, she had lost two brothers to the Holocaust. Along with her parents and sister, she settled on New York's Lower East Side, in a cold water flat on Rivington Street.

"The apartments were tenements," she says. "Forget air conditioning. My sister and I used to sleep on the fire escape in the summer... right above all the garbage."

Her mother renamed her Goldie to sound more American. Her father ran a candy store and she became friends with an African-American man who worked there. He gave her a radio, and her favorite station played doo-wop. 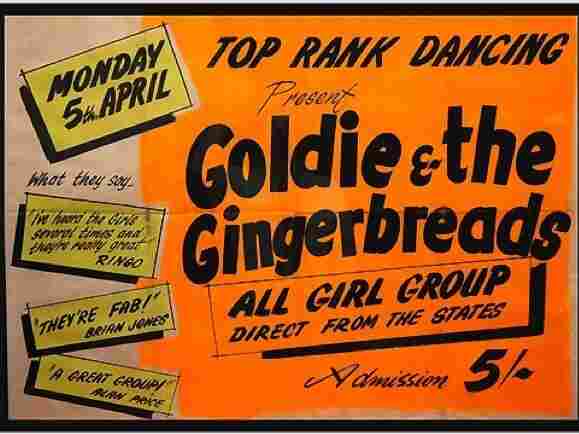 Genya Ravan — then known as Goldie Zelkowitz — broke into the major-label music world with the all-female band Goldie And The Gingerbreads. Courtesy of the artist hide caption 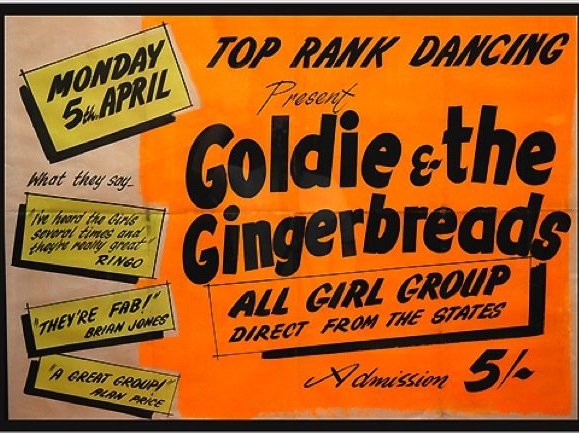 Genya Ravan — then known as Goldie Zelkowitz — broke into the major-label music world with the all-female band Goldie And The Gingerbreads.

"It was hard to pick up," she says. "And the DJ, he'd be going in and out, in and out, and then I'd be hearing my songs, my fabulous songs!"

Singing along with the radio not only helped her with her English; it also gave her an identity. One night in 1962, she went to a club to see a band. Behind the courage of a few drinks, she got onstage — on a dare — to sing along.

"Well, never dare me to do anything!" she says. "I got up on stage. There was a standing ovation! So they said, 'Sing another one!' Yeah! They fired their lead singer and asked me to join them!"

The band was called The Escorts, and with Goldie Zelkowitz behind the mic, they scored a regional hit.

That would be a story in itself — at least, playwright and director Chris Henry thought so. Those early years of the singer's life are the basis of Henry's new off-Broadway musical, Rock And Roll Refugee.

"What I really wanted to do is to flesh out more of what was it like growing up on Rivington Street," Henry says, "what was it like learning to speak English by listening to black radio stations, and how everything in her life made her who she became as an artist."

But that's only the first act of Goldie Zelkowitz's real-life drama. Two years after joining The Escorts, in 1964, she was fronting the first all-female band to be signed to a major label.

"Hark, hark, an all-female band! This was a revolution!" says Andrew Loog Oldham, The Rolling Stones' original manager and producer. "I mean, we were used to The Shirelles or The Ronettes, but a band; that was a completely different story! And wonderful they were, and that was the beginning."

Goldie and the Gingerbreads toured Europe with The Rolling Stones, The Kinks and others — and scored its own UK hit, "Can't You Hear My Heartbeat?"

But in the United States, Herman's Hermits released their version of the same song just ahead of Goldie And The Gingerbreads, keeping them from duplicating their European success. The band broke up, and three years later, it was time for a new group and a new first name: Genya, short for her birth name.

"The drummer said, 'You should also give yourself a nice second name,'" she says. " 'Something for the way you sing — which is, you know, black, soulful!'" So she went with Ravan, meant to be pronounced "raven" (though the alternative spelling led many to call her "rah-VAHN").

Genya Ravan went on to form the jazz fusion band Ten Wheel Drive. The band was a favorite with critics and fans, but Ravan left after three albums. Clive Davis signed her to a major label deal, but her experience with that side of the music business was not a happy one.

"They were seemingly trying to make her their next Janis Joplin," Andrew Loog Oldham explains, "but Genya knows the gift she's got, and she's been true to it because she knows it gives her life."

So in 1978, she decided to produce her next album herself. It gave Ravan her first taste of creative control, and led to work as one of the first female independent producers in the music business. But her lyrics also pointed to a long-running struggle with drugs and alcohol.

"I was starting to go downhill badly," she says. "So I said to myself, 'Either live or die, one or the other.' And I decided to get clean."

That brings us to Ravan's third act. She did get clean, only to be diagnosed with terminal lung cancer — but once again, she beat the odds. Returning to music, however, proved a greater challenge. Without drugs and alcohol, she didn't know if she could muster the courage.

"What brought me down was also my strength at one time," she says. "I thought to myself, 'I will never write a good song again. I will never be able to sing well again.' You know, I just thought it was the end. Little did I know it was quite the beginning."

Returning to the musical roots that helped forge her identity helped her to move forward. She hosts two radio shows on the Sirius XM channel Little Steven's Underground Garage, and she's working on a new album — her fourth since getting sober.

"I hear a lot of people getting into trouble in their lives, saying, 'Well, when I was a kid, I didn't have that, I didn't have this,'" Ravan says. "I didn't either, and I took another way, you know? At least I found my voice."