Accessibility links
7 Things To Know About Presidential Appointments To The Supreme Court Republicans are adamant they will stop anyone President Obama names to replace Antonin Scalia on the Supreme Court. It's possible Obama's nominee would face the longest wait in history for a vote. 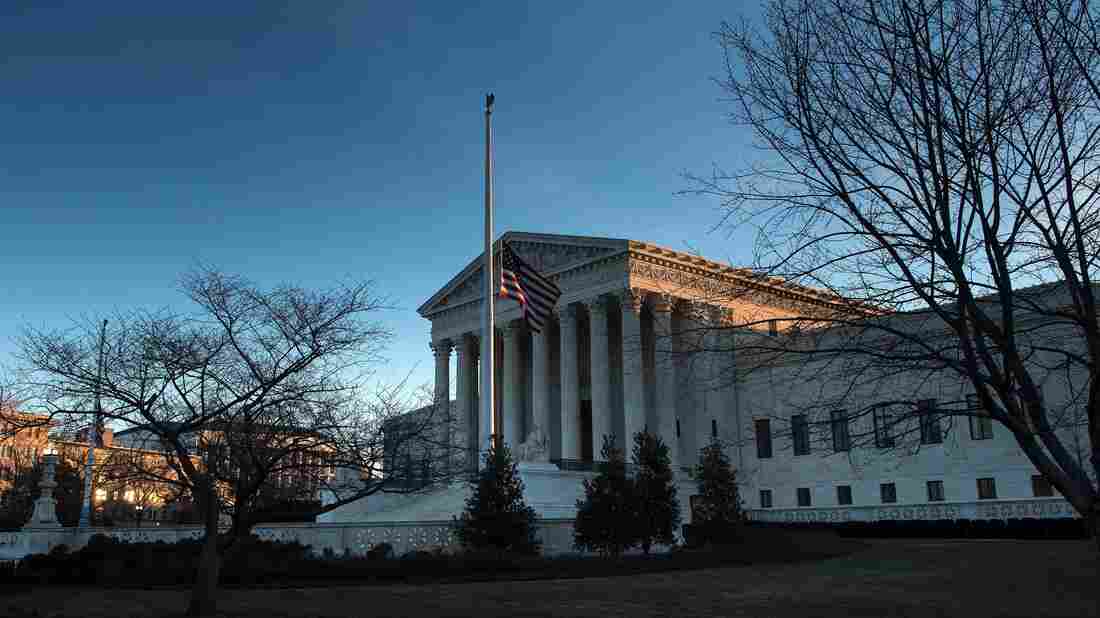 An American flag flies at half-staff outside the U.S. Supreme Court after the death of Justice Antonin Scalia. The fight to replace him could be historic, resulting in the longest vacancy in history. Brendan Smialowski/AFP/Getty Images hide caption 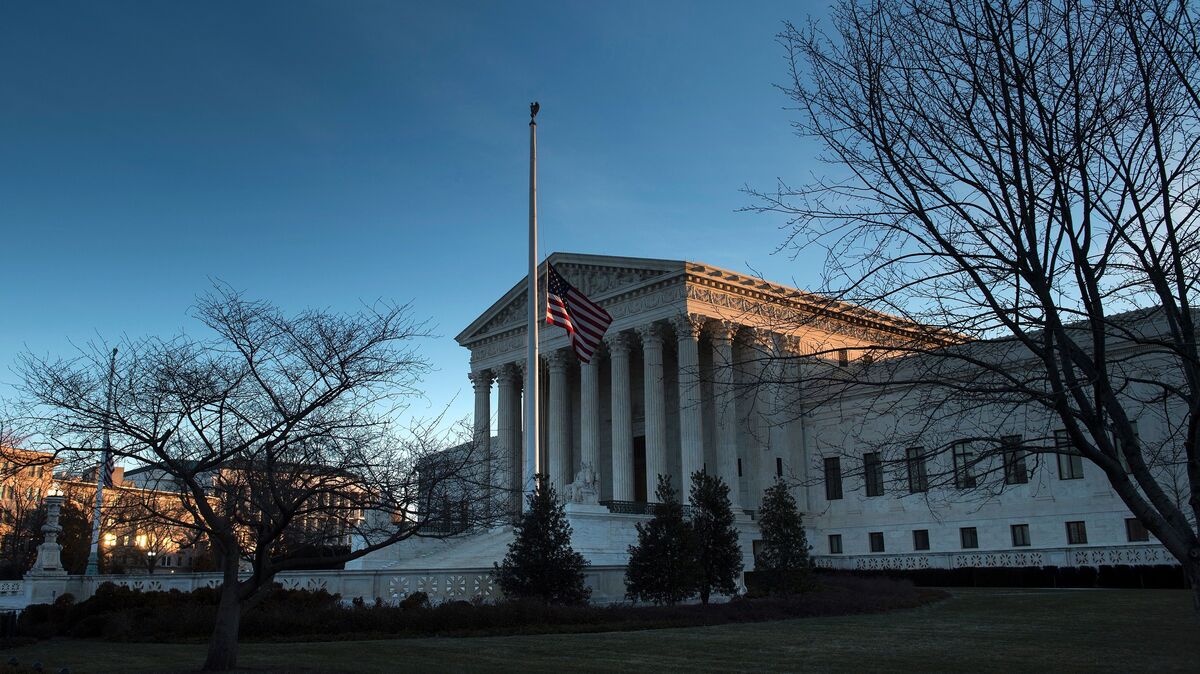 An American flag flies at half-staff outside the U.S. Supreme Court after the death of Justice Antonin Scalia. The fight to replace him could be historic, resulting in the longest vacancy in history.

The Appointment Clause of the Constitution (Article II, Section 2, Clause 2) states that the president "shall nominate, and by and with the Advice and Consent of the Senate, shall appoint ... Judges of the Supreme Court."

That "advice and consent" role has meant different things in U.S. history. In the early days of the republic, nominees to the court got a passing glance. The Senate acted speedily, within about a week, from the date of nomination to a vote. But there was a marked difference after 1967, the year Thurgood Marshall was nominated to be the first black Supreme Court justice. Post-1967, the median wait time for a presidential nominee has ballooned to more than two months. (Current members of the court faced an average of 71 days. That includes Antonin Scalia, who died Saturday.)

And it's very possible, if not probable, that Obama's nominee to replace Scalia — and he is pledging to fulfill his "constitutional responsibilities" to do so — will break the record for the longest wait for a vote in history. The fight to replace Scalia could be historic, possibly resulting in the longest vacancy on the court since it went to nine justices in 1869.

Republicans, who currently control the Senate, have said they don't think Obama should nominate anyone in this election year — even though Obama still has 11 months in office. With that, here are seven things to know about the presidential appointment process:

1. The longest wait for a nominee, from the time it was received to the time it got a vote, was 125 days for Louis D. Brandeis in 1916. (Obama has 341 days remaining.) Brandeis was ultimately confirmed, but only after 19 public hearings. Public hearings, by the way, were new to the process 100 years ago. Before Brandeis' nomination, the Senate had never before held the public hearings we're all now so used to. What's more, only once — in 1873 for the nomination of George H. Williams to be chief justice — is there a record of the Senate's having conducted even closed, private hearings, according to the Congressional Research Service. Williams' nomination was withdrawn a month after those hearings. (See table at bottom of this post for a full list of longest wait times.)

2. The longest vacancy on the Supreme Court was 27 months between the Tyler and Polk administrations before the Civil War. Tyler, derided as "His Accidency," because he was the first vice president elevated to the White House, also holds the distinction of a record eight nominees rejected or withdrawn.

3. The longest vacancy since the court went to nine justices in 1869 was 391 days. After Abe Fortas resigned from the court in 1969, Richard Nixon's first two attempts to replace him were narrowly rejected in November 1969 and April 1970. That means if Obama doesn't get a nominee through, the next president would have until March 12, 2017, before the vacancy record would be broken. (For a list of the top 10 vacancies, check out Time's chart here.)

4. There have been other nominees who got hearings in presidential election years. It wasn't until 1868 that the Senate determined that all nominees need be referred to the Senate Judiciary Committee. Sen. Chuck Grassley, R-Iowa, currently heads that committee. His office put out a statement Saturday saying no one in 80 years has been confirmed in a presidential election year. That wasn't true. Anthony Kennedy, currently serving on the court, was approved in February 1988 by a 97-0 vote. Grassley's office walked that back later, saying it meant nominated and confirmed. (Kennedy was nominated in November 1987.)

The year 1968 also keeps coming up. That's because Lyndon Johnson, who was on his way out as president that year, nominated Abe Fortas to be chief justice and Homer Thornberry to a court vacancy. Johnson withdrew their nominations a month before that year's general election after 22 hearings between them. Fortas, who had been appointed to the court three years earlier, nearly became chief justice. A cloture motion was rejected by two votes. His nomination was withdrawn three days later. Despite almost a dozen public hearings, Thornberry didn't even get a vote in committee. Both, though, did get hearings within two weeks of their nominations in June 1968.

Richard Nixon went on to win the presidency in November and got four nominees through, including one for chief justice.

6. The last person nominated and confirmed in a presidential election year was Benjamin Cardozo of New York in 1932. That's where Grassley's office gets the 80-year figure. It took a speedy nine days for the Senate to confirm Hoover's pick.

7. The last nominee rejected outright was Robert H. Bork in 1987. He faced 12 hearings and didn't get one until 70 days after his nomination. There have been about a dozen nominees who were rejected outright; 124 of the 160 nominated were confirmed, according to the Congressional Research Service. The fastest anyone has been rejected was five days. That record belongs to George Washington's nomination of John Rutledge to be chief justice in 1795. Rutledge is the earliest rejection of a nominee (by a 14-10 vote and also the only recess appointment to be rejected). In 1811, Alexander Wolcott was the fastest non-justice to be rejected. It took just nine days for the Senate to dismiss Madison's nominee.

Longest waits for presidential nominees to the Supreme Court (from receipt in Congress to result):

An earlier version of this post incorrectly identified the last person nominated and confirmed to the Supreme Court in a presidential election year as Stanley Reed in 1938. It was actually Benjamin Cardozo in 1932.