Accessibility links
Songs We Love: John Doe, 'Get on Board' LA punk pioneer digs deep into the dusty soul of America on a tune from his desert dream of a new album.

Songs We Love: John Doe, 'Get on Board' 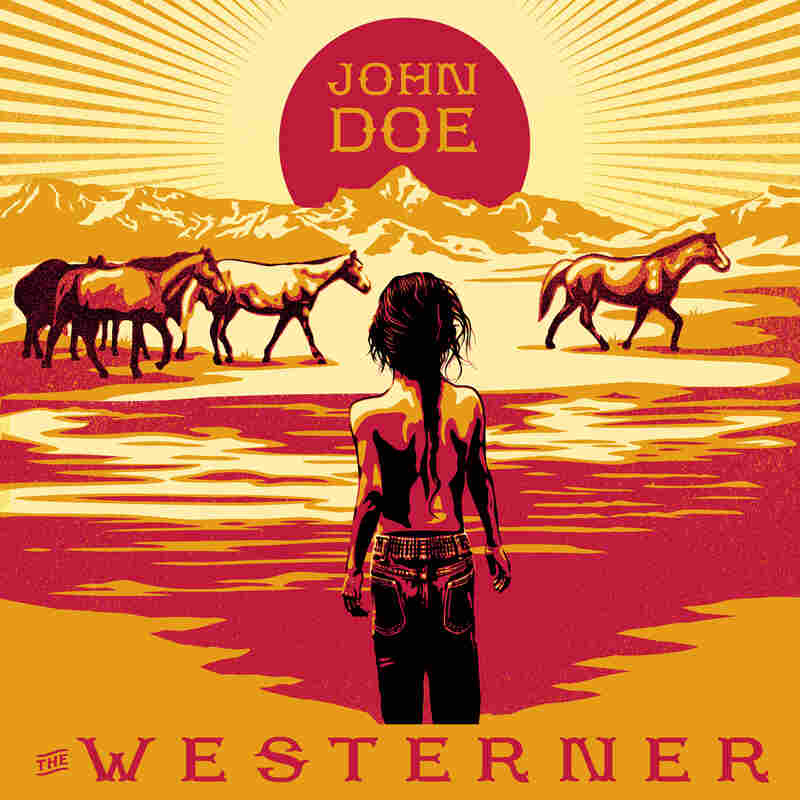 The Westerner Courtesy of the artist hide caption

Trains are such an essential part of American mythology that they have their own dedicated wing in the gilded palace that is this country's roots music tradition. In that wing is a room where John Doe's "Get on Board," the opening song from his new album, The Westerner, will share space with its spiritual kin: the traditional gospel tune "This Train," popularized by Sister Rosetta Tharpe, and "People Get Ready," the soul salvation ballad penned by Curtis Mayfield. Those earlier songs are explicitly concerned with the train that leads to heavenly redemption even as it makes earthly stops along the way. Doe's tune leaves the option open; as the simple, folk-based guitar chords ring out, recalling "This Train" but colored with plenty of rock 'n' roll grit and reverb, Doe exhorts us to partake of a journey that's both urgent and unavoidable, without getting too specific about the destination.

It's not too surprising that someone who made his bones in the scene that Doe details in his forthcoming book, Under The Big Black Sun: A Personal History of L.A. Punk, would eschew the role of holy-roller. But besides being the frontman for celebrated punk iconoclasts X, Doe was also a member of The Knitters, a mid-'80s cult super-group that included members of both X and The Blasters and offered up a fresh take on trad country, so a certain sort of reverence is no alien concept to him either.

The personal journey that led Doe to The Westerner found him cutting the record in Tucson with Giant Sand's Howe Gelb, for a sound full of dry, open air and desert plains. The album, dedicated to Doe's late friend, Dances With Wolves author Michael Blake, is the singer/songwriter's attempt to capture what the West means to him by kicking up a roots-rocking dust storm flecked with the country and folk influences that have been a part of his solo career since it began in 1990. (Guests like Debbie Harry and Chan Marshall pop up to help Doe realize his vision.)

Ironically, the video for "Get on Board" finds John Western-suited and guitar-slinging, bashing out the tune on the platform of a New York City Subway station (the Q line at Brooklyn's Beverly Road, to be exact). The clip seemingly suggests that the train he's singing about is accessible from one end of the country to the other, and does not discriminate once you've paid your fare. So maybe it's the American dream that's the final stop on the route; or maybe it's a more personal kind of journey Doe has in mind. As The Westerner's opening cut, it could just be an invitation to take a ride. But maybe it's a "Mystery Train" (Doe would definitely bump up against that tune in the gilded palace of roots), in which case it would be utterly impolitic of Doe to damn us with details.

The Westerner is out April 29 on Cool Rock Records/Thirty Tigers; Under The Big Black Sun: A Personal History of L.A. Punk is out April 26 on Da Capo Press.