Accessibility links
5 Ways Scalia's Death Complicates The 2016 Election The death of the Supreme Court justice raises the stakes. What are the implications for both sides, and could it drive voters to the polls? 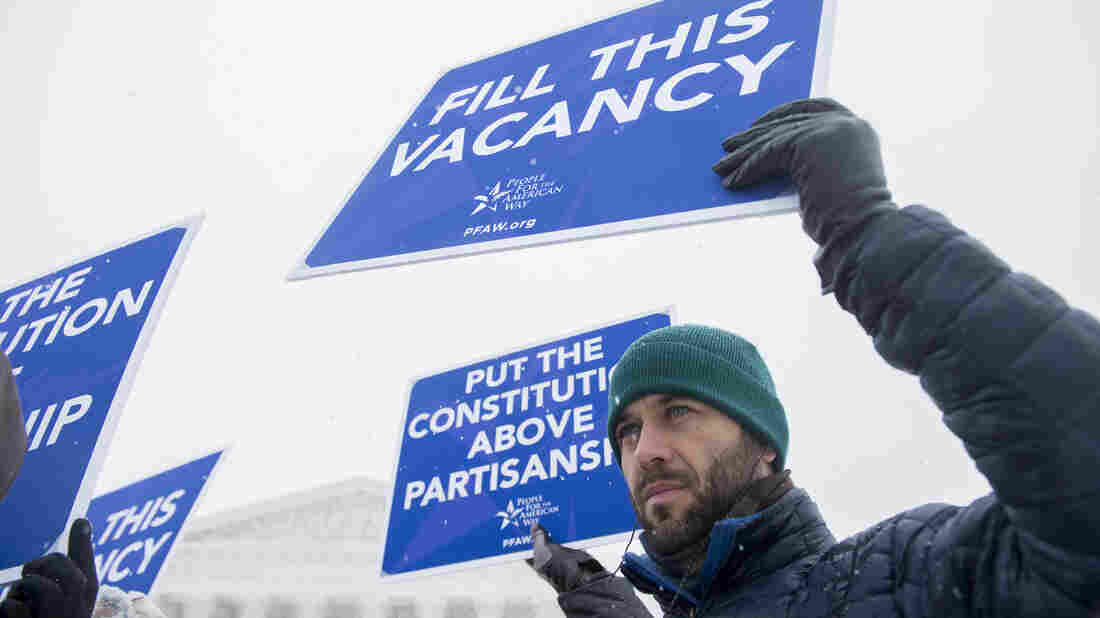 Activists with People For the American Way demonstrate outside the Supreme Court on Monday, calling on Congress to give consideration to whomever President Obama nominates to replace Antonin Scalia. Bill Clark/CQ Roll Call/Getty Images hide caption 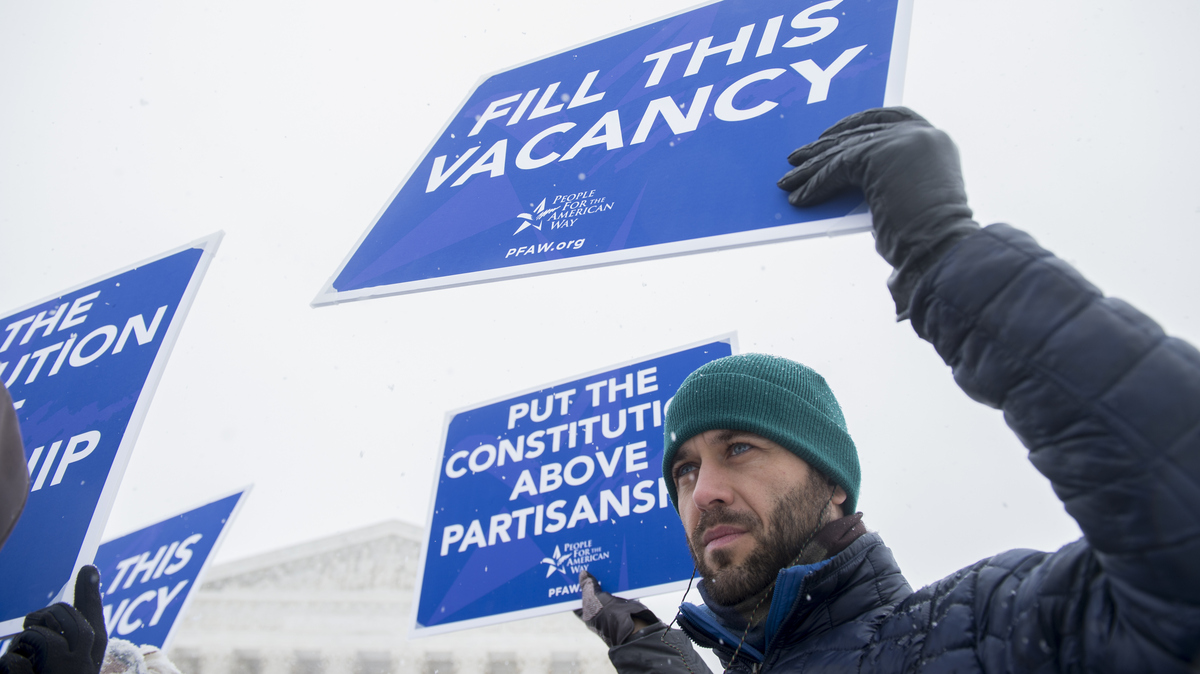 Activists with People For the American Way demonstrate outside the Supreme Court on Monday, calling on Congress to give consideration to whomever President Obama nominates to replace Antonin Scalia.

Antonin Scalia's body wasn't cold before his seat on the U.S. Supreme Court became tangled up in partisan politics. Here are five ways Scalia's death is complicating the 2016 election.

1. Obama looms even larger: After two terms, this election was always going to be a referendum on the Obama presidency. The upcoming nomination battle (even if the Republicans refuse to hold hearings or votes on the nominee, there will still be a battle) will make that even more obvious. Hillary Clinton is a quasi-incumbent. For all intents and purposes, she's running for Obama's third term. The Republican candidates are arguing that they have to rescue the country from all the damage they believe Obama has done. This makes that fight exponentially more intense.

Up until now, the only court vacancies Obama has had to fill are ones left by liberals. This is a chance for him to change the balance of power on the court, so it makes the remainder of his presidency much more consequential and much more controversial — with repercussions for all the campaigns.

2. Obama's choice to try to put Republicans in a box: The GOP pledge to block any Obama nominee makes this a very unusual nomination. The chances of confirmation are so slim that Obama could, if he wanted to, pick someone to merely send a political message. But that's unlikely. For the White House, picking the most qualified, broadly acceptable, history making nominee — not unlike Sonia Sotomayor — might just be the best way to help Democrats make the case that Republicans are being obstructionist. The Republican promise not to have hearings or votes on any nominee might affect the president's choice in another way — it may make it harder to find someone willing to be nominated just to be a sacrificial lamb, unless there's a Democratic president in 2017 and maybe a Democratic Senate.

3. The Democratic primary: Right now, both Clinton and Bernie Sanders are saying the same thing — the Senate should vote on the president's nominee. But the debate in the Democratic primary is all about pragmatism versus idealism. It's possible that if Obama nominates someone who, under different political circumstances, could get 60 votes, that person might not be liberal enough to satisfy Sanders, for example, if they ever represented big corporations. But that's assuming Sanders wants to break with Obama on the Supreme Court just as he is trying to appeal to African-American voters in the South.

4. Unintended consequences for the GOP: Did Mitch McConnell make a mistake when he did what the GOP base wanted him to? It's possible that a 10-month battle to block whoever is the nominee could backfire. That will depend on how broadly acceptable the nominee is and whether general-election voters think that "delay, delay, delay" is a responsible strategy. The Democrats are busy trying to make Republicans look very extreme. McConnell's strategy could throw a monkey wrench into Republican leaders' plans to show voters they have a positive, constructive governing agenda. Back when McConnell became majority leader he said he wanted to show the American people that if Republicans had control of both houses of Congress and the White House it wouldn't be "scary." Then there are the senators up for re-election in blue states. Most all of them have signed on to McConnell's strategy, but to refuse to hold hearings or even a vote might strike some voters as obstructionist. The GOP has the votes it needs to reject a nominee — it's highly unlikely that 14 senators would side with all the Democrats for a filibuster-proof majority.

For the GOP primary battle, all the candidates agree that the next president, not Obama, should make the nomination, but this issue might help Ted Cruz the most. He's been running as a constitutional conservative. And he says he wants the whole 2016 election to be a referendum on the Supreme Court.

5. Might all of this increase voter turnout and engagement this cycle? So far, the GOP seems more energized. Republicans had record turnouts in Iowa and New Hampshire, and Democrats have slipped from 2008 levels, but those are only two data points. Usually, the Supreme Court balance of power only matters to the most intense activists on both sides. The battle over Scalia's successor could change that. Up until now, the court was more of an issue for the Republican base. GOP base voters feel the Supreme Court decisions on same-sex marriage and the Affordable Care Act were betrayals. Now that there's no longer a conservative majority on the court, they'll be even more energized.

But it also could energize Democrats, because up until now, a conservative-majority court, which we've had for almost 50 years — is not something they just have to live with. All of a sudden, a Democratic president could have the chance to reshape the court in a way Obama didn't. It makes the stakes in this election much, much higher.