Accessibility links
Review: Willie Nelson, 'Summertime' On his new album of George and Ira Gershwin covers, the prolific 82-year-old singer has never sounded more like he belongs on the sunny side of the street. 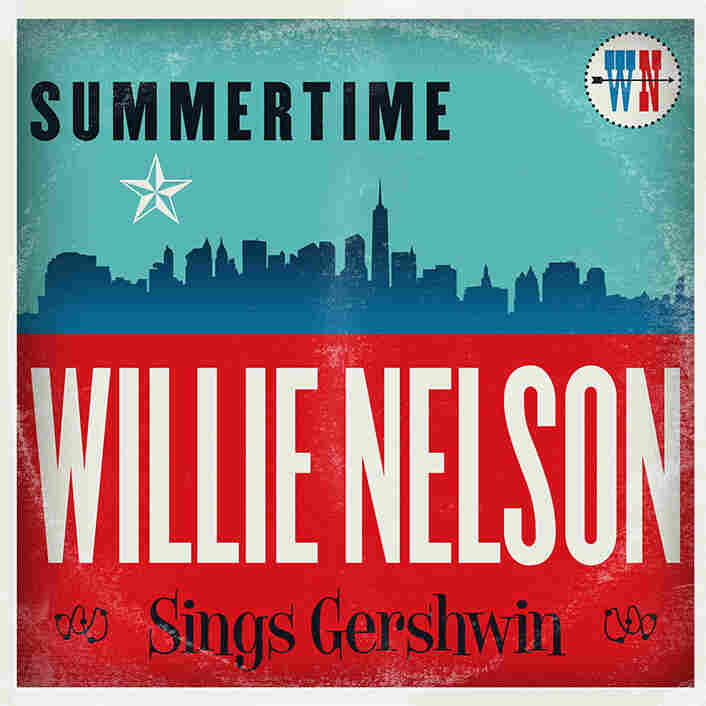 Every time Rod Stewart, Linda Ronstadt, Carly Simon or even Bob Dylan have done a standards album, maybe they should have had to pay a small royalty to Willie Nelson. The co-king of the 1970s outlaw-country movement did about the most outlaw thing he could have done in 1978 by releasing Stardust, a deep dive into the then-uncool Great American Songbook that presaged decades of other rock, country and soul singers also doing their part to break down the Irving Berlin wall. He wasn't the first of his generation to make a recorded case for Hoagy Carmichael, Ringo Starr's little-noticed solo debut, Sentimental Journey, having been an early entry in the genre. But it was the quintuple-platinum Stardust, far more than any other album, that marked an official end to the generation gap.

The last song on Stardust was George and Ira Gershwin's "Someone To Watch Over Me," and 38 years later, he revives that revival on Summertime: Willie Nelson Sings Gershwin. Probably wisely, Nelson resisted the urge to title his Gershwin tribute album S'Willie — that doesn't quite trip off the tongue the way it should — but this prosaic title fits, too. In Willie's world, the livin' is nothing but easy, and the general mood befits the musical comedies of the 1930s from which most of the songs spring (Porgy And Bess withstanding). While at 74 Dylan is using his excursions into standards (he just started recording another one) to stare down dark, Sinatra-style alleys, the 82-year-old Nelson has never sounded more like he belongs on the sunny side of the street.

This applies even to the straight ballads. You almost have to laugh hearing Nelson re-record "Someone To Watch Over Me," because the last person in the world you'd take for a "little lamb who's lost in the wood" would be the romantically independent and usually blithe Nelson. But it's an enormous pleasure to hear him glide through Ira's pleading syllables, even if we don't believe the vulnerability and anguish in the album-opening "But Not For Me" for a breezy second.

Nelson does "put on some speed" in plenty of the new album's tracks, adopting a style that nearly approaches the light-footedness of Western swing, though there's nary a moment you'd mistake for straight country. "I Got Rhythm" opens with riffs being traded between Nelson's eternal harmonica player, Mickey Raphael, and guest steel-guitar legend Paul Franklin — and it's interesting that Nelson makes freer use of steel when he's venturing toward jazz than he does back in the country wheelhouse. Nelson's triumph in his use of rhythm is to make you barely notice any rhythm at all, from the first touch of brushes on a snare in the opening track. "Jaunty" and "effortless" may sound like damning-with-faint-praise terms, but Nelson's lack of interest in having us see him or his crack ensemble sweat is no reason not to admire the decades of accomplishment that make the singer sound as born to Gershwin champagne soirees as to Toby Keith duets.

A few years ago, as part of his at-least-an-album-a-year output, Nelson released To All The Girls..., a collection of new duets with female singers. He reprises that concept here with a pair of collaborations. First up is Cyndi Lauper — set to make her foray into country this spring — in "Let's Call The Whole Thing Off." She uses the pure comedy of Ira's lyrics as a springboard to have even more fun with the (arguable?) mispronunciations, and can't help blurting out, "I love you, Willie" over the solo he delivers on his trusty acoustic guitar, Trigger. Nelson doesn't return the vocal idiosyncrasies, so it's unclear if he's having what she's having or has already quietly made the decision to call things off, but his and Lauper's harmonies in the chorus exude truly vintage-sounding sweetness. A more frequent duet partner, Sheryl Crow, plays it straight in "Embraceable You," the perfect aperitif for a Valentine's Day gone particularly well.

If you love the Red-Headed Stranger but Gershwin is, for some reason, not your thing, don't worry — he'll have another album out in about 10 minutes, to add to the 70 or so studio records already in his just-keep-scrolling discography. When he asks, "Who's got the last laugh now" (in "They All Laughed"), it's clearly a trick question: A sense of finality, or even winding down, is not in his vocabulary. If you believed in cosmic balance, you could almost imagine that his having such a prolific career is justice for George "You Can't Take That Away From Me" Gershwin having been taken away from us in 1937 at the tragic age of 38. "Our Love Is Here To Stay"? That's a sentiment you do believe, coming out of the sweet mouth of the most lovable of all immortals.