Accessibility links
Family Drama Meets Existential Horror In 'The Humans' On its surface, the play sounds pretty ordinary: A young woman and her boyfriend have her family over for Thanksgiving dinner. Then things start to get weird. 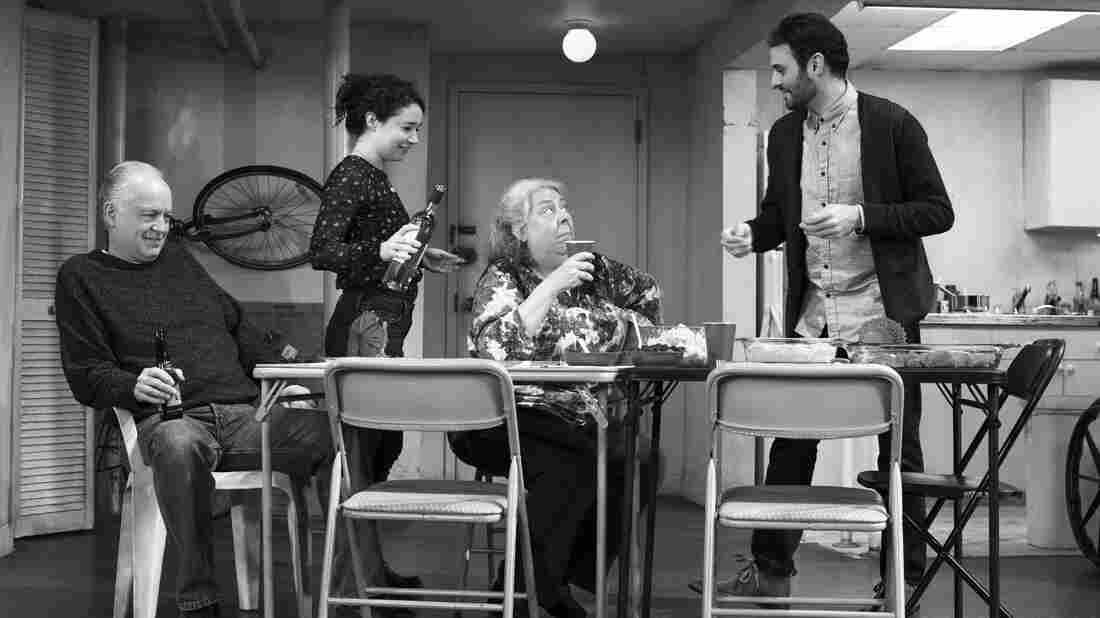 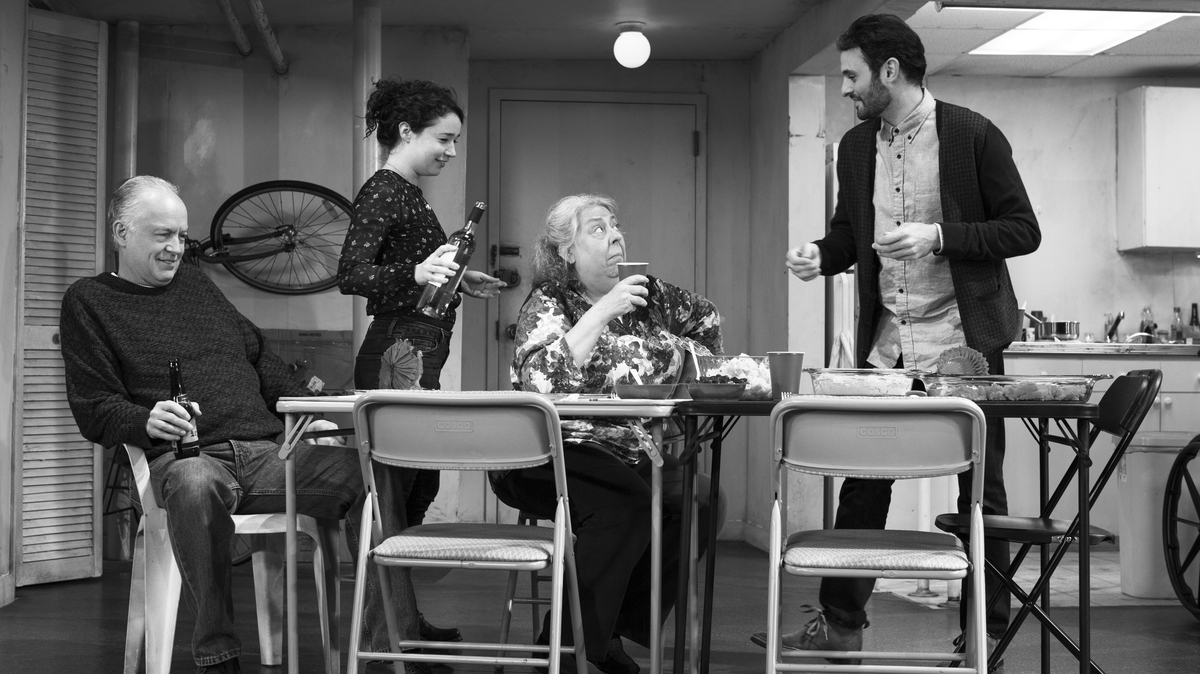 The Humans is set during a family's Thanksgiving dinner, hosted by the youngest daughter and her boyfriend. (Pictured: Reed Birney, Sarah Steele, Jayne Houdyshell, Arian Moayed)

On the surface, the setting for the new Broadway play The Humans couldn't be more ordinary: A young woman and her boyfriend have moved into a basement apartment in New York's Chinatown and invited her family for Thanksgiving dinner.

Over the course of 90 minutes, they do what families do: They laugh, they bicker, they express their love. But director Joe Mantello says playwright Stephen Karam is up to much more. "He's so smart about how he's constructed the play and how it appears as if nothing's happening for quite a long time," Mantello says. "And then you get to the end of it and you realized, 'Oh.' "

That "oh" factor is the fact that The Humans is a mash-up of genres. Initially, Karam intended to write a thriller with people crashing through windows and ghosts jumping out of closets. Then he fell in love with the characters he was writing.

"What ended up happening was I sort of, in spite of myself, ended up with a family play that is sort of infected by my love of the thriller genre," Karam says. "Instead of a thriller about a family, I feel like I've ... ended up with a kind of family thriller."

When the play opened off Broadway last fall, it got rave reviews from most critics. The New York Times' Charles Isherwood was impressed by the way it captures so many kinds of dread. He says, "It does manage to reflect very dark currents in American culture right now: the squeezed middle class, the fears that everyone has that the future is not going to be as bright as the past. At the same time, it's also a very funny play." 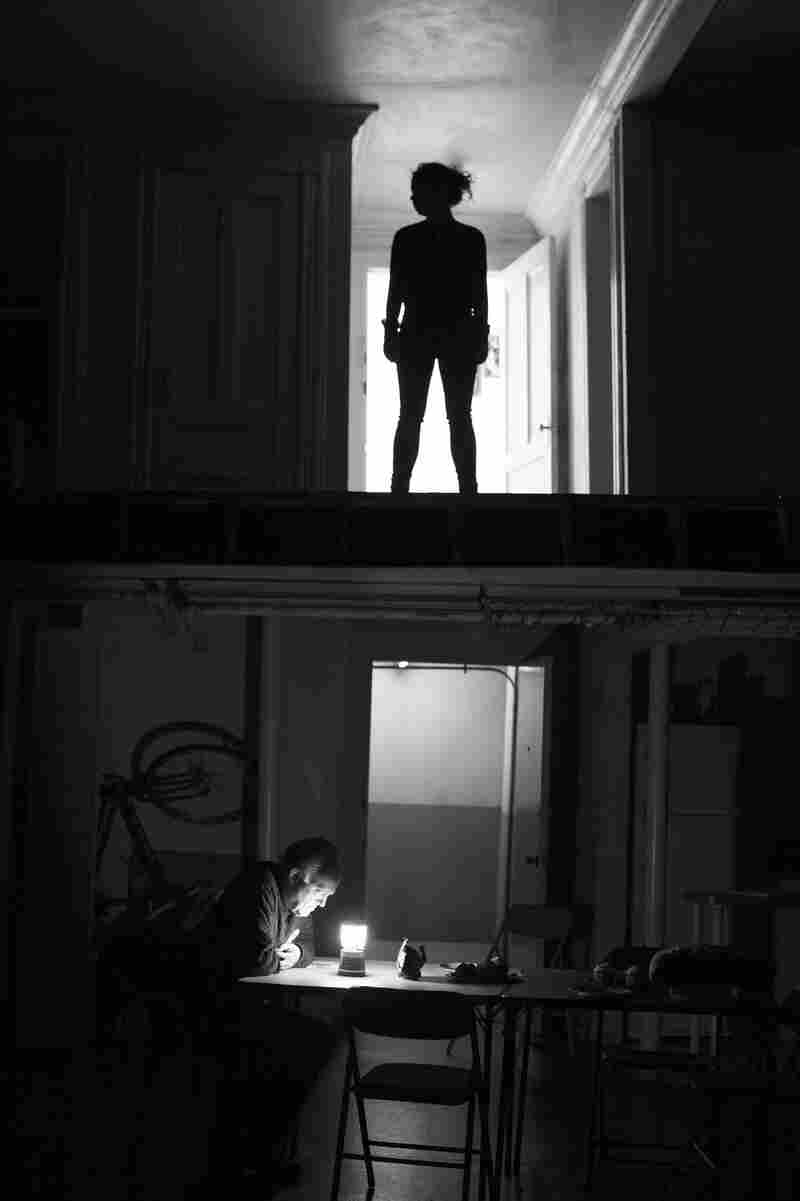 Even the play's set evokes fear, with weird noises and shadows, and the lights go out one by one. (Pictured: Sarah Steele, Reed Birney) Brigitte Lacombe/Courtesy of O&M Co. hide caption 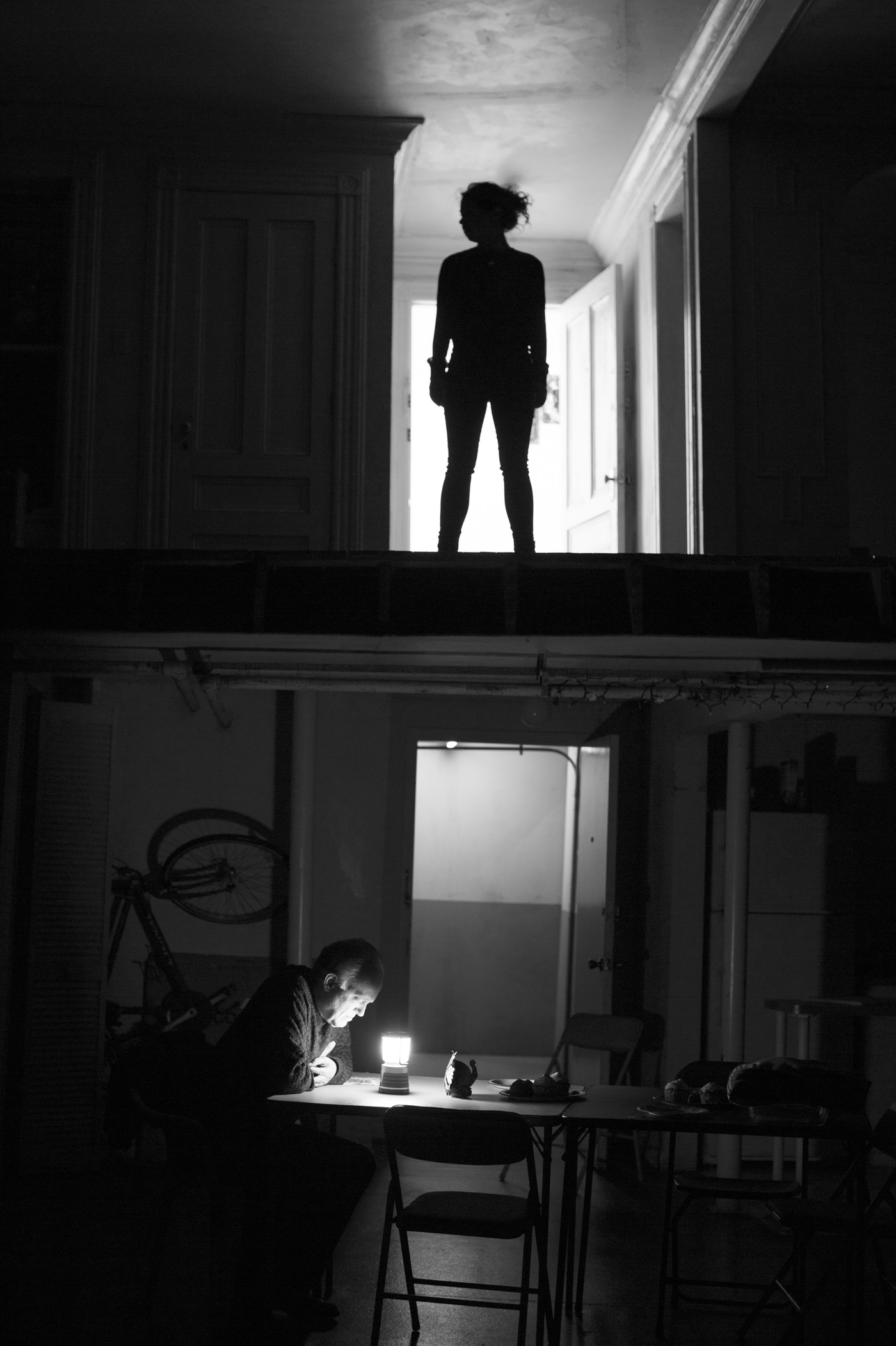 Even the play's set evokes fear, with weird noises and shadows, and the lights go out one by one. (Pictured: Sarah Steele, Reed Birney)

Stephen Karam has called his plays deeply autobiographical, but not in a literal sense. He grew up in Scranton, Pa., with a Lebanese-American father and an Irish-Catholic mother. In The Humans, the young woman who lives in the Chinatown apartment is an aspiring but poor artist who's also from Scranton. She's played by actress Sarah Steele, who has collaborated with Karam four times. Steele's character might be considered a stand-in for the author, who only quit his day job a few years ago, but Steele says, "He's not one character in the play. I think when most people write stuff that's autobiographical, they're one character in a play. He's sort of all of the characters."

And as The Humans progresses, it becomes clear that all the characters of this Irish-Catholic clan are dealing with some profound personal issues.

"I think the play is a little obsessed with exploring the existential horrors that we all experience," Karam says. "You know, our fear of death, our fear of poverty, our fear of ill health and losing the love of someone."

Even the set evokes fear. There are weird noises from upstairs and shadows in the apartment's only window, and the lights go out one by one. By the end, the patriarch of the family, a man haunted by his own secrets, is left alone onstage in the dark. Director Joe Mantello says it's a tricky balancing act.

"You don't want it to turn into an episode of Scooby-Doo at the end," he says. "It really has to work on some sort of larger existential crisis that this man is having; his fear of being left to his fear of losing his family."

But even if The Humans ends up being kind of a haunted house play, Karam feels the message is actually optimistic. He says, "I'm always amazed by how resilient and funny and just incredible people are in the face of all of these anxieties — which is why I think the play is really interested in how do we get up and move through our days, even with these big, existential horrors always kind of hanging over our heads?"

The play's answer: with humor and dignity, despite things that go bump in the night.