Accessibility links
What You Need To Know About Nevada's Democratic Caucuses On Saturday, Democrats in Nevada will choose between Bernie Sanders and Hillary Clinton in what has been dubbed the "First in the West" caucuses. Clinton once had a large lead, but not anymore. 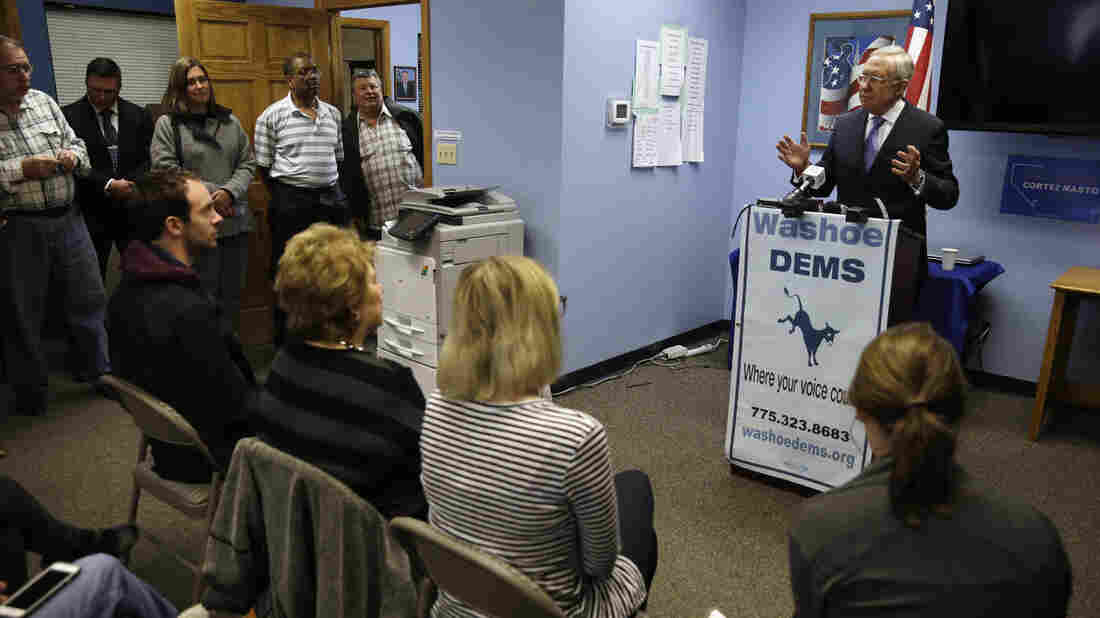 Senate Minority Leader Harry Reid of Nevada kicks off a caucus training session in Reno on Wednesday. Firehouses, schools and a handful of casinos will open for caucusing on Saturday. Marcio Jose Sanchez/AP hide caption 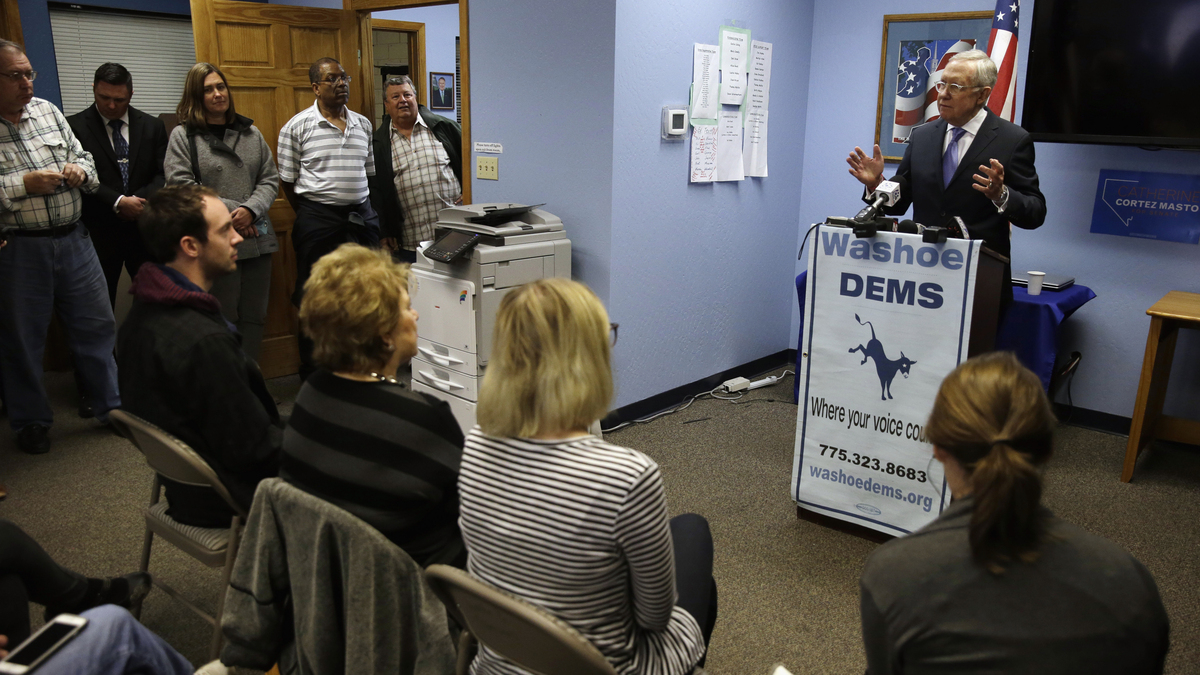 Senate Minority Leader Harry Reid of Nevada kicks off a caucus training session in Reno on Wednesday. Firehouses, schools and a handful of casinos will open for caucusing on Saturday.

While much attention has been focused on Republicans competing in this weekend's South Carolina primary, Democrats will face off in Nevada on Saturday during the "First in the West" caucuses.

The race between former Secretary of State Hillary Clinton and Vermont Sen. Bernie Sanders is tighter than anyone anticipated even a month ago. If you're watching from a distance or even if you live in the Silver State, here's what you need to know.

How does Democratic caucusing work in Nevada?

The caucuses take place on Saturday and the doors open at 11 a.m. PT. There are caucus sites at firehouses and schools, and also in a handful of casinos on the Las Vegas Strip, so shift workers can take part.

Caucusgoers move to different sides of the room to indicate which candidate they support. It's actually a lot like Iowa (so if you understood that confusing system, you're in luck). There can be a couple of rounds of forming "preference groups," though with only two candidates this time, there may not be a lot of reshuffling. Then the votes (or really voters) are tallied up, and delegates to county conventions are assigned.

Or if you need your dose of cute for the day, the Bernie Sanders campaign created an explainer using stuffed animals and a little girl who pronounces it cow-cus.

One important thing to note is that there is same-day registration, so people who aren't registered to vote or who are Republicans or independents can show up on Saturday, register as Democrats and caucus. All of this makes predicting an outcome incredibly hard.

How close is this race?

Nevada was supposed to be Hillary Clinton country. With its diverse population, the state was supposed to be the start of Clinton's firewall to stop Sanders. Based on what the campaigns are saying now, it's clear that firewall isn't as strong as originally thought.

"I think Nevada could be close. I sure do," said Clinton senior strategist Joel Benenson. "I think any of these states could be close. We'll see. I mean it's coming up pretty quickly."

That is not a campaign with swagger, exuding confidence. Public polls, which are admittedly pretty unreliable (because it is a caucus state with same-day registration and a transient population) show the race is well within the margin of error.

Meanwhile, Sanders, in an interview on the Nevada PBS show Ralston Live, could barely contain his optimism.

"We were way down here," Sanders said. "Who thought that we could win Nevada? If we get a decent turnout here I think we've got a real shot."

He was saying the same thing before Iowa, where Clinton wound up winning by the narrowest margin in history — so narrow, it was basically a tie. For some time, Sanders was spending more money on ads in Nevada than Clinton. NBC is reporting that is reversed and Clinton is spending more.

How diverse is Nevada's electorate?

You could say Nevada is what America would look like in the future. According to 2014 Census estimates, the population is 28 percent Hispanic, 9 percent black and 8 percent Asian. And those populations are growing quickly.

Dig down into the Democratic electorate and it is even more diverse than the general population. In 2008, Democratic caucusgoers were 65 percent white, 15 percent black and 15 percent Latino.

People like Nevada Sen. and Minority Leader Harry Reid argue Nevada's electorate is a much better reflection of the nation than Iowa or New Hampshire, the states that vote first. That's why he pushed to get Nevada moved up early in the calendar.

Planning to caucus Saturday on the #LasVegasStrip? This is what you need to know. #NVCaucus pic.twitter.com/UzIfdEvctu

The Culinary Workers Union endorsed Barack Obama in 2008 and worked hard to get its members out to caucus. This year, that very influential union is staying neutral. It still worked to make sure its members could vote from their workplaces in casinos.

In 2008, 117,000 Democrats turned out to caucus. Experts in the state don't expect it to be nearly that high this year, in part because of the Culinary Union's neutrality.

Another thing about the caucuses in Nevada: 2008 was the first year they came early in the primary cycle. Before that, caucuses were sleepy affairs. So there's not a strong caucus history in Nevada like there is in Iowa. It's unfamiliar, and the population in Nevada is so transient there's been massive turnover since then. This is an added challenge for campaigns trying to get their supporters out to caucus.

They caucus on Tuesday, and much like in Iowa, they gather together and vote using paper ballots. None of this standing next to your neighbors publicly showing who you support stuff like the Democrats do. Turnout is expected to be even lower for the Republicans.