Accessibility links
Under Apartheid, Trevor Noah's Mom Taught Him To Face Injustice With Humor The Daily Show host grew up biracial in South Africa; his mother was jailed for having a relationship with his father. But she always turned to humor before anger, Noah says — a trait he's inherited. 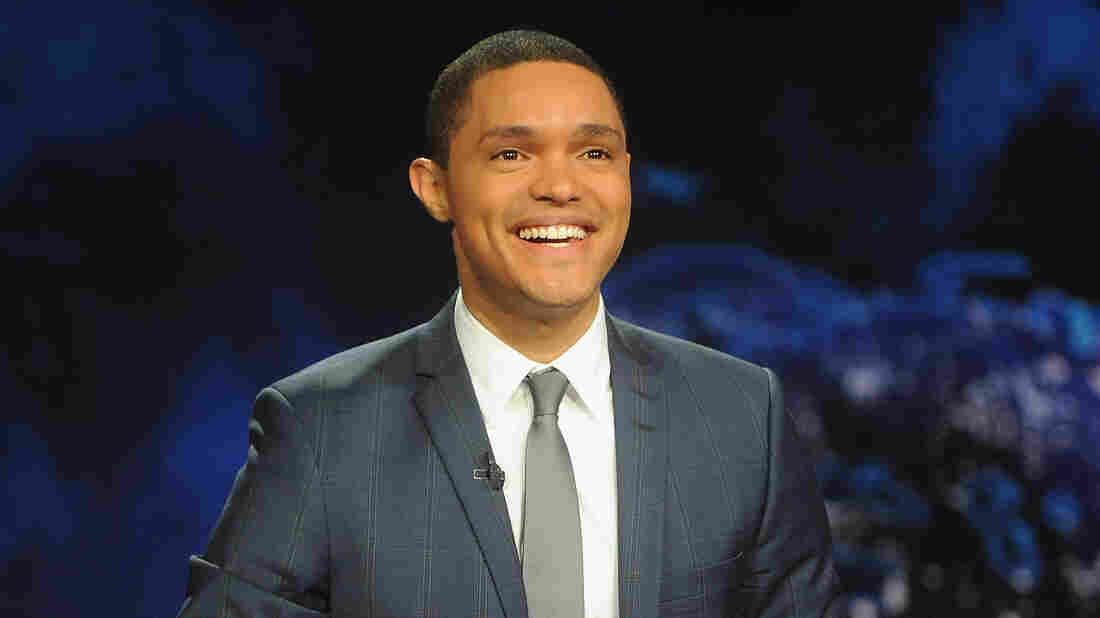 Trevor Noah — who took over hosting from Jon Stewart in 2015 — remembers watching The Daily Show on CNN in South Africa. "It looked like a news show and it had the same colors as CNN and the ticker," he says. "I just worked under the assumption that it was part of the news programming. ... I thought that Jon Stewart was a news anchor who didn't take his job seriously." Getty Images hide caption 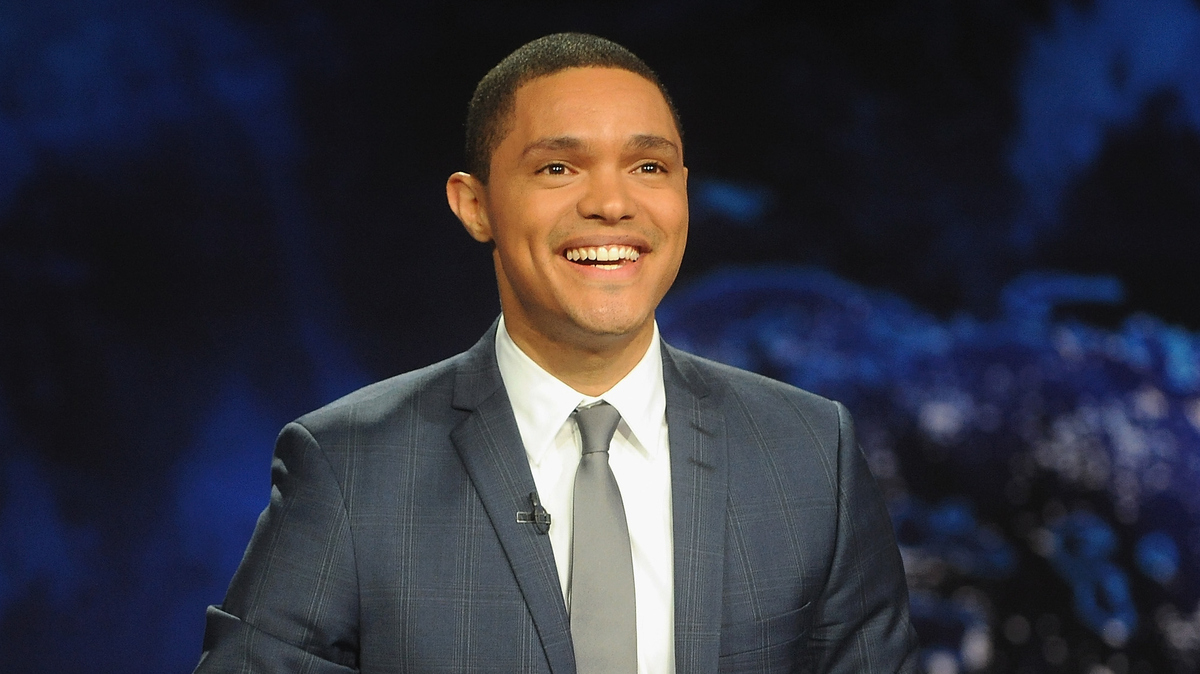 Trevor Noah — who took over hosting from Jon Stewart in 2015 — remembers watching The Daily Show on CNN in South Africa. "It looked like a news show and it had the same colors as CNN and the ticker," he says. "I just worked under the assumption that it was part of the news programming. ... I thought that Jon Stewart was a news anchor who didn't take his job seriously."

Growing up in South Africa with a white father and a black mother, Trevor Noah confronted prejudices on both sides. He tells Fresh Air's Terry Gross that both white people and black people would express fear and biases to him. Then, he says, "I'd have to explain to them, 'Hey, you can't think like that. You can't hold these views, because you're generalizing everybody.' "

His experience growing up enables him to see both sides of an issue — which helps when it comes to creating political satire on The Daily Show. "I've understood multiple experiences simultaneously," he says. "That's something I've always done and I continue to do till this day: I try and see the perspective of the other side."

He adds that while the pressure of creating a daily television show can be intense, those pressures pale in comparison with those he knew growing up in Soweto during apartheid.

"When I think back. ... Not 25 years ago, I was living in basically a very elevated hut with no running water or indoor sanitation. I can't trick myself into getting stressed by First World problems," he says. "Things are going great. Things are going very, very well."

On his mother being jailed on and off for having a relationship with Noah's father, who is white

My mom opposed the system as a whole, so she never let that stand in her way, and I think I have a lot of my mom's demeanor. Even when she told me the story she was never angry, she just went, "It's a stupid thing, and so I refused to listen to it."

She never came at it from a place of anger. If anything, she defied it and she didn't give it the credibility that it was trying to create in the world. So that's something that I inherited from my mom — that in my family we're not quick to anger, if anything, obviously there are moments where you find things ridiculous or ludicrous, but not quick to anger, rather find a way to laugh about it or to minimize it using humor. ...

As much as there were the people on the forefront fighting, really every movement is also underwritten to a certain extent by the people who undermine the restriction or the laws that restrict people by just refusing to adhere to those laws.

On growing up in Soweto during apartheid

It was wonderful; it was electric. Even today Soweto is a beautiful community; everyone knows everybody's names, there's just a sense of togetherness. And I think because everyone was going through the same thing, it was a shared experience. It didn't feel like it was suffering.

You knew that there was a cloud hanging over a nation, but there were lots of moments of joy within that time period. The streets were dusty, there weren't many tarred streets. The houses were very modest, because the government would allocate land and that's where you could live. So everyone found a way to make ends meet.

I'm very lucky in that I never look back at it as a tough upbringing because it was the only upbringing I knew, and everyone was doing it with me. Essentially it's like being in a very stringent fitness class — if everyone is suffering together it doesn't seem so bad.

There were seven or eight of us at one point living in a one-room house or two-room house at some point. We had outdoor sanitation, every four or five houses would share one toilet outdoors, and then you would have one faucet outdoors that you could go and get your water from.

But this is how everyone lived, and because everyone was doing it, then it's normal. I'm very lucky in that I never look back at it as a tough upbringing because it was the only upbringing I knew, and everyone was doing it with me. Essentially it's like being in a very stringent fitness class — if everyone is suffering together it doesn't seem so bad.

When someone gets shot in the head and suffers no brain damage and is alive and needs to go through no surgery and a bullet completely passes through the head, then you almost have to concede. Who was I to say "I don't believe in miracles" when I've seen this happen in my life?

We laughed about it, we joked — that's really the hallmark of my family is a few days afterwards in the hospital — my mom was the person who cracked the first joke. I was crying by her bedside and she said to me, "Don't cry. Look on the bright side: Now you're officially the best-looking person in the family."

We've overcome a lot because of laughter. I think that's why I love comedy so much, it's because it's the thing that has kept my family going through every single type of adversity.

On being aware of cultural differences in comedy

It's a process of trial and error. You work through the material, you talk to the people. It also helps to live here, which is something I could only do with time. So for instance, in America there's a huge sensitivity around "fat." If you say somebody's fat, because there's been a culture of fat-shaming and there's clearly an epidemic, partly because of the food and just because of the lifestyle and so on that this is no longer being seen as a choice thing anymore.

Whereas where I'm from, you would be teased more for being skinny. Fat and thin were two sides of the same coin; it was never something that could be held over anyone. ... It's not judged as much, it's just a statement of a fact. ... These are small land mines that you pick up as you go from one place to the next; you go, "OK, this is sensitive here but it's not sensitive there."

More On 'The Daily Show'

Maybe Trevor Noah Shouldn't Be So Comfortable With An Indoor Toilet

On the criticism he received for a tweet from 2014, in which he retweeted: "When a woman is loved correctly she becomes ten times the woman she was before," and then commented: "so she gets fat?"

I'm not surprised by the response to any comedy taken out of context. Comedy is all about context. If you think about the things that you say to your friends or to people you know, if a stranger hears them they would think you're the most horrible human being in the world. When you know someone, that's when it becomes comedy. That's exactly what comedy is: It's a familiarity that is combined with you breaking down a commonly held belief.

So, what was ironic about that tweet that you're reading is that was me and my girlfriend at the time. That's something that no one even bothered to check. You go, "Who was he messaging?" I was speaking to my girlfriend at the time in public, and we were both fat at the time. We had gained a lot of weight, we were both happy, we were both lazy, and so we were joking about it. But people don't bother, they go, "You were fat-shaming a stranger on the Internet!" This is not a stranger, this is somebody that I live with and somebody that I love. ...

With the change in social media and sharing and videos and so on and sound bites, we now live in a world where people are part of conversations that they originally weren't really, so you're now overhearing everything that everybody's talking about and you're not part of the conversation.