Accessibility links
In Rural America, Homeless Population May Be Bigger Than You Think The rural homeless often crash with friends or stay in cheap motels on cold nights due to a lack of shelters. But this means homeless tallies miss them — and the state gets less funding to help them. 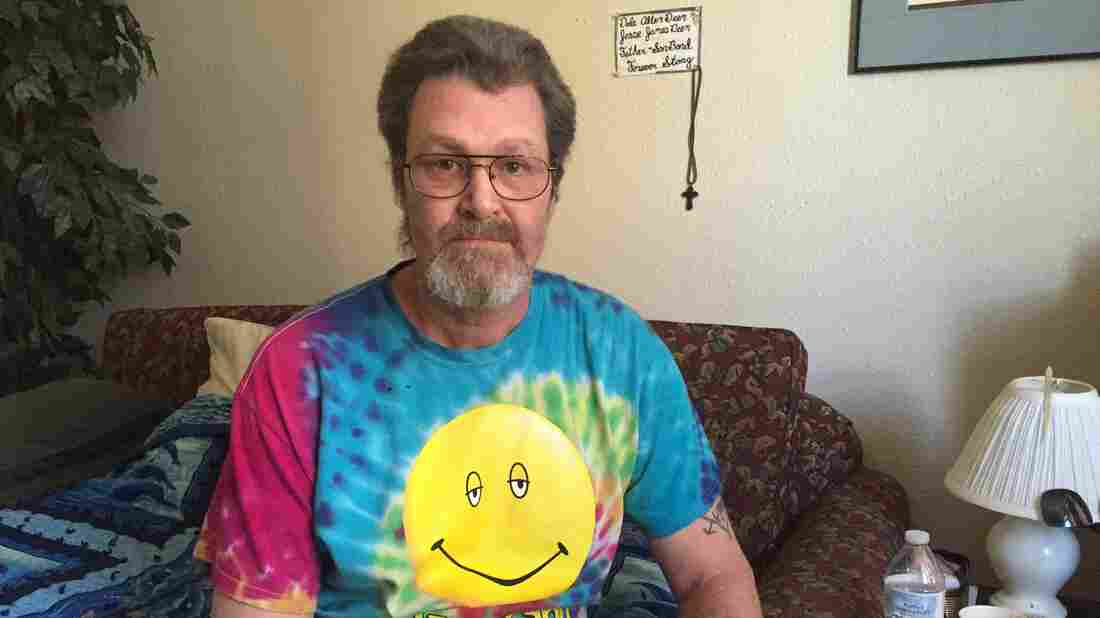 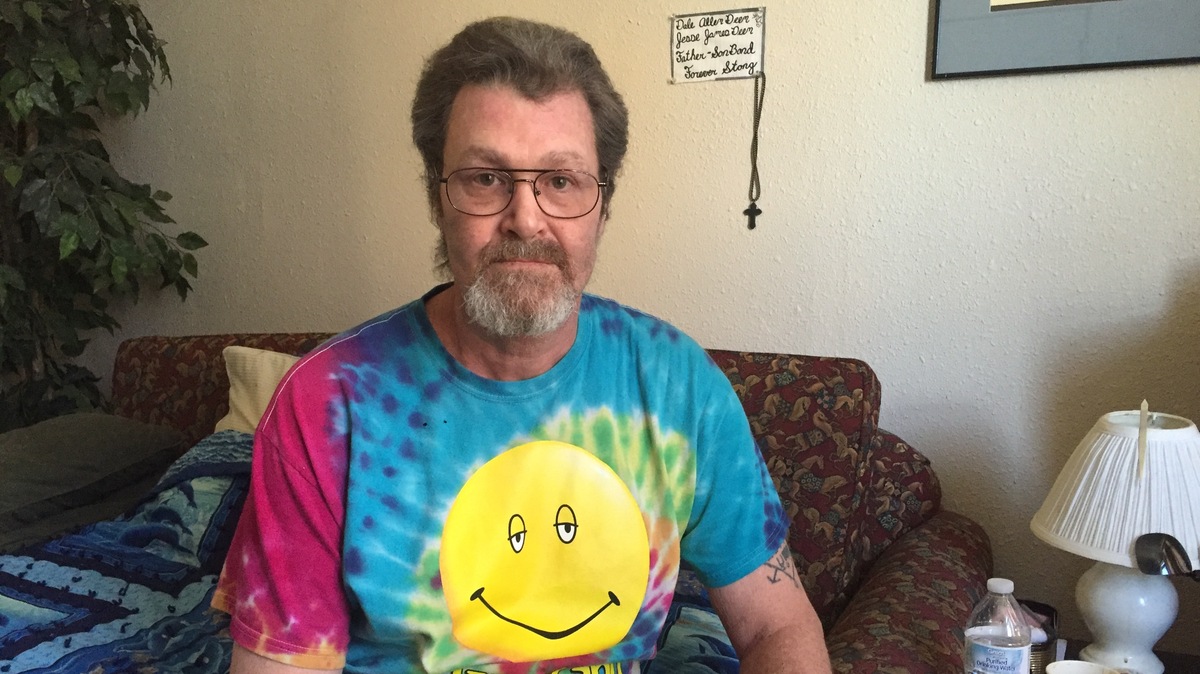 The point-in-time count for the homeless population often misses those who crash on friends' couches or stay in cheap motels due to a lack of shelters. Dale Dean, from Cheyenne, Wyo., is one of them.

Official homelessness numbers come from the point-in-time count: A 24-hour tally of a community's homeless population on the streets or in shelters. But in rural areas such as Wyoming and South Dakota where shelter space is scarce, people often crash with friends or stay in cheap motels on cold nights.

The 24-hour counts that happen across the country in January will miss these people in the official tally.

"They're not out in the open like they are in a larger city, because they find places," says Jennifer Cruz, a volunteer who drove around Cheyenne, Wyo., during a point-in-time count. "I just met a gentleman who's been sleeping on his brother's couch, but he is homeless." 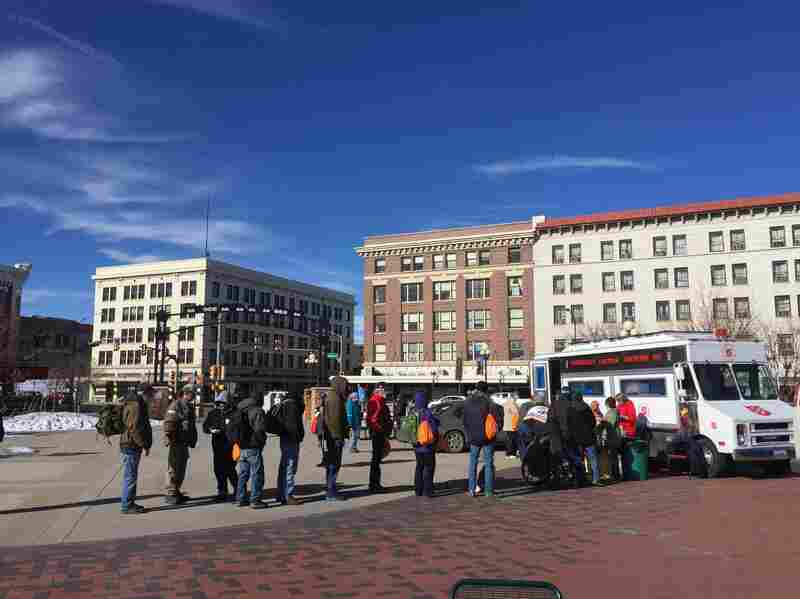 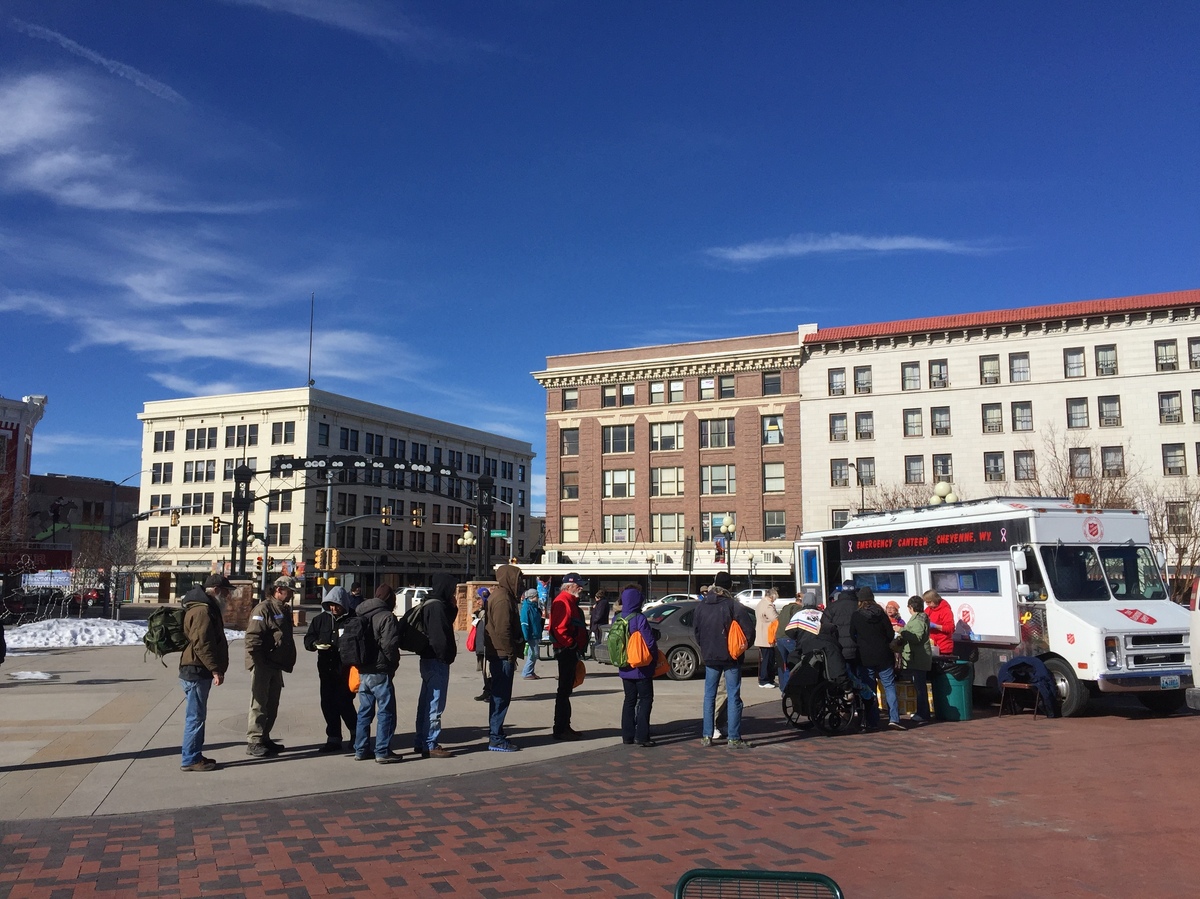 The homeless line up for lunch and hot drinks at Cheyenne's Depot Plaza in Wyoming.

To address this problem, volunteers in Wyoming are getting creative. They put up flyers around town advertising a free meal and hot drinks in Cheyenne's main plaza, where the homeless answer federal homelessness surveys. Even so, volunteers here are still going to miss some people who don't have a home — people such as Dale Dean.

Dean is crashing on a friend's futon in the Pioneer Hotel, a cheap place in Cheyenne.

"Being as its wintertime, it gets very cold," Dean says. "So far, I haven't (slept outside.) I've been pretty fortunate, you know. I've met enough people."

There is only one homeless shelter in Cheyenne, and currently, its 90 or so beds are completely full. Dean's good luck is the reason why the point-in-time count isn't always accurate. This year, Dean won't be counted as homeless.

The count is a standard used by the Department of Housing and Urban Development. It is performed in January based on the logic that the cold weather will drive people into emergency shelters, where they are easier to find. It is important: The count will in part determine how much federal money state homeless services get. Advocates say when even a few homeless people aren't counted it can make a big difference in the funding.

Building A New Community For The Rural Homeless

Rick Garcia, the regional administrator for HUD in Denver, says the January count is the best time for the country as a whole.

"We are aware that the count certainly is not perfect," he says. "I think the goal is that we have a count at one time of the year that everyone in the nation is creating."

To Megan Hustings, director of the National Coalition for the Homeless, the point-in-time count is just one of many challenges that those seeking to end rural homelessness face.

Laramie, Wyo., is an example. The nearest shelter to the university town with a population of about 30,000 is an hour away with no regular bus service to get there.

Wyoming homeless advocates are now working on a plan to do another homeless population count this summer. It may not open the door to more federal funding, but it will help them get a better sense of homelessness in the state.