Accessibility links
Movie Review: RACE While Race is, for a while, a conventional athlete biopic, once the story begins to balance the many forces that pulled on Owens and complicated his story, it gets more interesting. 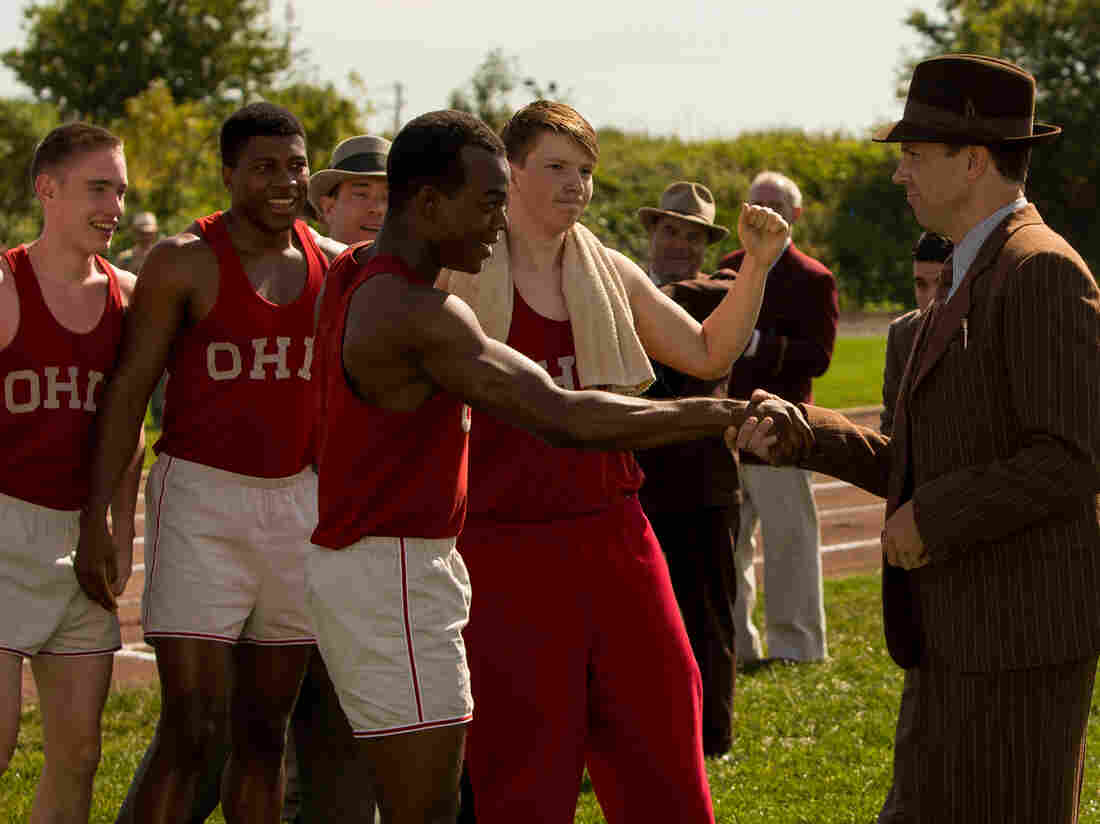 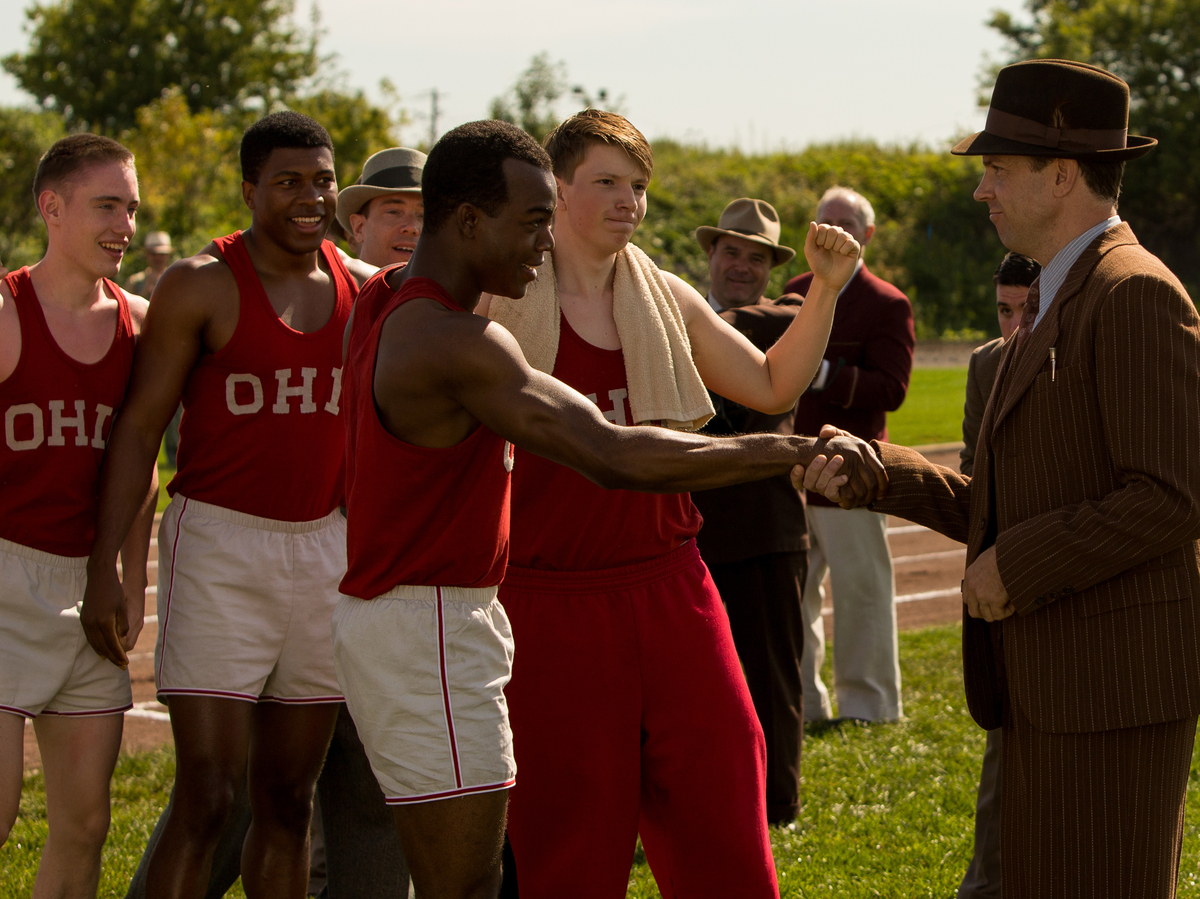 For a while Race, a handsomely mounted drama about a pivotal moment in the life of track star Jesse Owens, bowls along as a crisp, if conventional, account of a black athlete who triumphs over poverty and racism to get the gold. An unprecedented four gold medals to be precise, at the 1936 Berlin Olympics. But that's getting ahead of ourselves. In Cleveland, there are angry, red-faced bigots to get in the way, and the statutory tough-love coach, serviceably rendered by Jason Sudeikis, to smooth the path to glory.

The road to success is no cakewalk: Coach Snyder is a bit of a lush who comes to Owens having screwed up his own athletic career and his family life. Owens hasn't had it easy either, having already fathered a child with his sweetheart, Ruth (Shanice Banton), whose loyalty he briefly betrays before coming to his senses. He gets more saintly later, and not necessarily to the film's advantage. But for now, there is learning to live with prejudice in a funny, appalling scene in which Snyder models for his protege how to screen out the ugly noise and focus on being — the mostly lively screenplay by Joe Shrapnel and Anna Waterhouse has a few bum lines— the best that he can be. Refreshingly, though, the point of view belongs not to Coach but to Owens, who's ably played by the impossibly beautiful Canadian actor Stephan James, last seen as civil rights activist John Lewis in Selma. His graceful carriage is pure pleasure, his victories over haters satisfying. And though this ground has been well covered in other biopics about athletes of color, it bears repeating.

Things start to get interestingly out of hand when the canvas widens to rumors of war in Europe, where Hitler plans to turn the games into a showpiece for his Aryan master race. For the Fuhrer (Adrian Zwicker) and Joseph Goebbels (a stony-faced Barnaby Metschurat), this specifically excludes the likes of Owens or his two Jewish teammates. But before he sets foot on German soil, Owens must contend with the NAACP, which pressures him to stay home in solidarity with the country's oppressed minorities. Also muddying the waters is a divided U.S. Olympic Committee dominated by the corruptible real estate developer Avery Brundage, played by Jeremy Irons, looking unnervingly like British Prime Minister Neville Chamberlain, who was busy conducting his own little policy of appeasement across the pond.

Realpolitik rules, and if Race is bracingly candid on the back-room politicking about Germany's treatment of its Jews that raged on both sides of the Atlantic, it's stronger still on the mixed signals awaiting the team in Berlin. The Third Reich is just gearing up, so there's actually less physical segregation for the black athletes than there was at home. No such luck for their Jewish compatriots or for the German-Jewish citizens we see loaded onto trucks, even as Owens steps out into a stadium ringing with thousands yelling "Sieg Heil." That Owens was lionized and befriended by Germany's star jumper Carl "Luz" Long (David Kross), a brave and decent man, is well known and movingly told here. It's unfortunate, then, that Dutch actress Carice Van Houten strains all belief as filmmaker and Nazi propagandist Leni Riefenstahl, gussied up into a concerned humanitarian who mediates between the Americans and Joseph Goebbels while she makes her documentary Olympia. Either someone's been reading the real-life Riefenstahl's self-cleaning memoirs, or the need was felt for a well-turned ankle to glam things up.

What is a fiction film's responsibility to history? Is it a lack of focus or simply the truth that, late in the movie, Owens fades into a dignified but mostly passive witness to the diplomatic maelstrom? The scenes in which he wins his four golds are a big thrill, but to Hopkins' credit, he doesn't fudge the fact that despite the hero's welcome to which Owens returns on the streets, it's humiliating business as usual when he arrives at the front door of a swank hotel for a dinner in his honor. It would be decades before Owens was invited to the White House, and decades more for this engrossing film to get out the word.

The original version of this review placed the 1936 Olympics in Munich instead of Berlin.