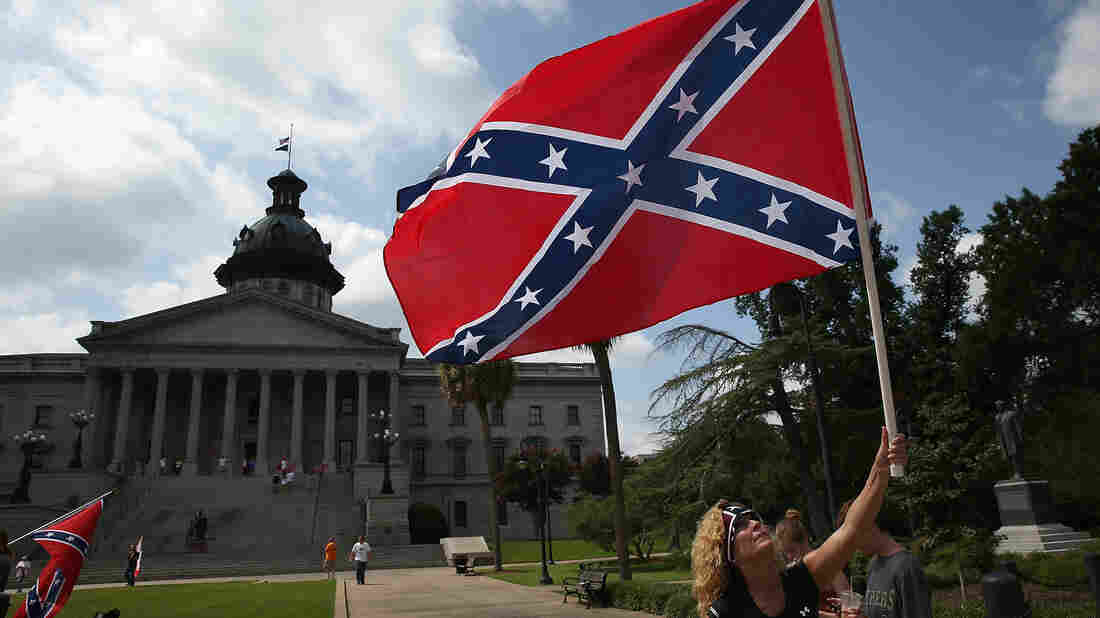 Barbie Byrd, of Columbia, S.C., joins a group of demonstrators on the grounds of the South Carolina State House calling for the Confederate battle flag to remain on the Capitol grounds in June 2015. Win McNamee/Getty Images hide caption 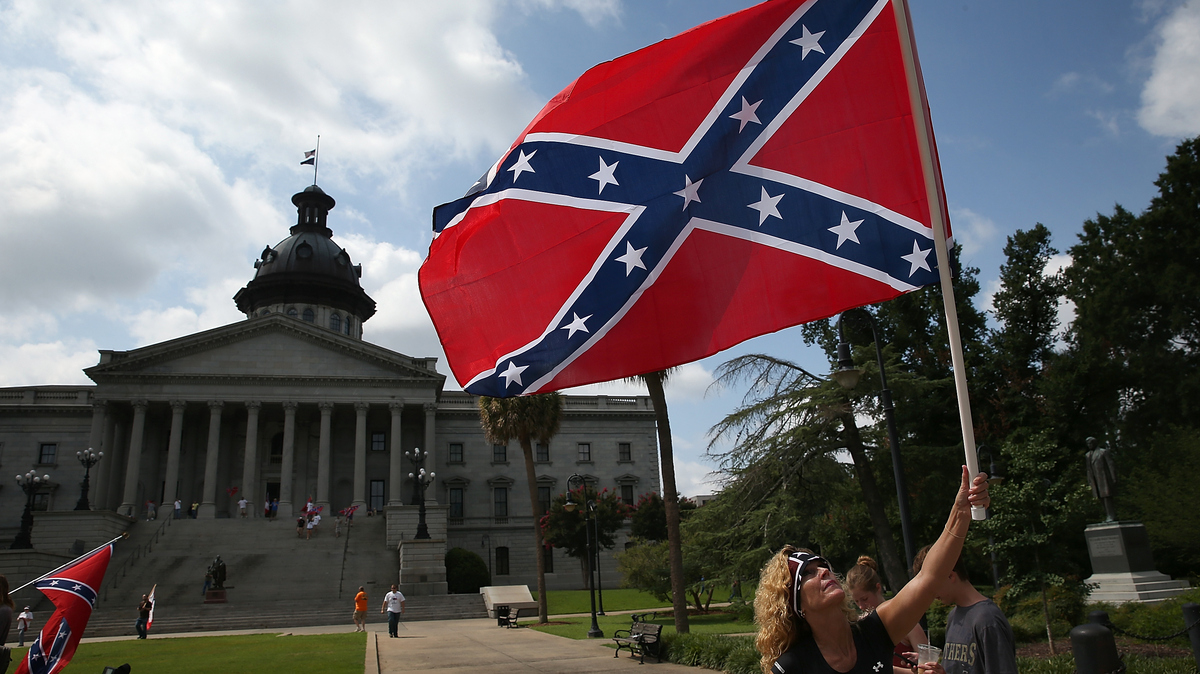 Barbie Byrd, of Columbia, S.C., joins a group of demonstrators on the grounds of the South Carolina State House calling for the Confederate battle flag to remain on the Capitol grounds in June 2015.

It wouldn't be South Carolina without stuff like this.

A superPAC supporting Ted Cruz is hitting Donald Trump in South Carolina radio ads and robo calls for his support of the removal of the Confederate battle flag from the State Capitol grounds. Another robo call out Friday night is also hitting Trump for appearing to be supportive of "forward motion" on LGBT equality.

"People like Donald Trump are always butting their noses into other people's business," an announcer says over dark music in the ad from Courageous Conservatives PAC. "But Trump talks about our flag, like it's a social disease."

Listen to the ad here:

Nikki Haley, the state's Republican governor, called for the flag's removal in June of last year after nine black parishioners were killed in a Charleston church in a racially motivated attack.

The other ad, from the same group, highlights a questioner at a Trump event, who identifies herself as lesbian and asking if under a Trump presidency there would be "more forward motion on equality for gays and lesbians." Trump says in response, "Well, you can, and look that's your thing and other people have their thing. We have to bring all people together."

Listen to it here:

The ads and robo calls comes just a day before the crucial GOP primary in South Carolina, where Trump and Cruz are jostling for the top-two spots.

The Cruz campaign, for its part, denounced the Confederate flag ad. "This is from someone not affiliated in any way with our campaign, and it is not something we condone," Cruz spokeswoman Catherine Frazier told NPR before the LGBT rights ad came out.

The Confederate flag ad highlights a rift between the old and new guards in the state — and in the South. Florida Sen. Marco Rubio, who is on Cruz's heels, got Haley's endorsement this week. It was a striking picture on stage, one the Rubio campaign was eager to highlight, of Rubio, who is Hispanic, with Haley, an Indian-American woman, and Tim Scott, the state's first black U.S. senator.

The Republican Party has worked hard over the last several years to put that kind of new face on the party by recruiting candidates of color after it has struggled mightily to win over non-white voters. Those efforts have produced the most diverse field of candidates in history for Republicans.

At the same time, ironically, Trump, who is being targeted in this pro-Cruz ad, has grabbed the spotlight time and again in this campaign with impolitic rhetoric that threatens the GOP's diversity effort.

The ad is a reminder that there are lingering resentments that groups, like the pro-Cruz superPAC, hope to exploit. Reached by phone, Rick Shaftan, a spokeman for the superPAC, told NPR the spot is running on the radio and as a robo-call in South Carolina Friday only.

Shaftan said he believes the flag removal was a product of "silly political correctness." He said the ad "criticizes Trump for jumping in and telling South Carolina what to do," which he said showed "arrogance" and a "lack of empathy."

(The group landed in controversy back in November when it ran a radio ad touting Cruz as someone who "makes things happen." And: "After Sandy Hook, Ted Cruz stopped Obama's push for new gun-control laws.")

Shaftan pointed out that Cruz, when asked about his thoughts on the flag's removal, said the matter should be decided at the state level. Back in June of last year, Cruz said he could see "both sides," but that it was up to South Carolina to decide.

"I think that's a question for South Carolina," Cruz told the Washington Post then, "and the last thing they need is people from outside the state coming in and dictating how they should resolve that issue."

The Trump campaign did not immediately responded to a request for comment, but Trump has accused Cruz of being a "liar." In a recent debate, Trump called him the "single-biggest liar. You are probably worse than Jeb Bush."

Taking up a Cruz line of attack against Trump's conservative credentials, the ad hits Trump for bankrolling "every major Democrat in the country."

It concludes this way: "On Saturday, send Donald Trump and his New York values back to Manhattan. Ted Cruz for president. Let's take our country back. Now, before it's too late."

Here's a transcript of the Confederate flag ad:

TRUMP: "Respect whatever it is that you have to respect, because it was a point in time, and put it in a museum."

ANNOUNCER: People like Donald Trump are always butting their noses into other people's business. But Trump talks about our flag, like it's a social disease.

TRUMP: "Respect whatever it is that you have to respect. Let it go. Put it in a museum."

TRUMP: "Respect whatever it is that you have to respect. Let it go. Put it in a museum."

ANNOUNCER: "On Saturday, send Donald Trump and his New York values back to Manhattan. Ted Cruz for president. Let's take our country back. Now, before it's too late."