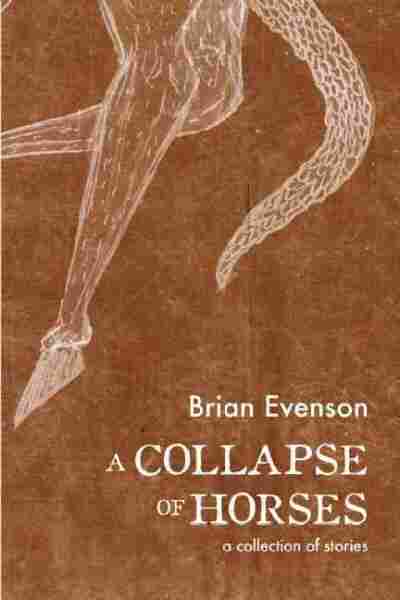 A Collapse of Horses

The stories that bookend Brian Evenson's newest collection, A Collapse of Horses, are connected by two unsettling elements. The first is an image: a man's gunshot leg leaving a bloody swath across the flank of a horse. In Western-genre-infused "Black Bark," this image exists in real life — or as real as life gets in Evenson's stories — as two men flee aggressors on horseback into a surreal, shifting landscape. In "The Blood Drip," it's part of a campfire tale as two men — one of them probably dead, one of them maybe alive — confront each other after a conflict drives both of them into the woods. The second element is a story, a horrible story that one man is trying to tell the other.

Evenson is deeply interested in narratives that slide around like the interior workings of a labyrinth, where walls are doors and doors disappear and hallways might be there, or not. Many of the stories are surreal and deeply unreliable; a veritable encyclopedia of all the ways the human animal might be incapable of a firm grasp on its experience. There's oxygen starvation ("The Dust"), drugs ("The Moans"), dystopia ("A Report"), the distortion of the open road ("Past Reno"), head injuries, too. In both the titular story and "Click," a nameless protagonist experiences some sort of accident, and is afterwards able to only give an unstable account in which nothing, no matter how straightforward or simple, can be assumed to be true. It's impossible to get a foothold in these stories, and so the reader's experience reflects the protagonist's volatility.

Evenson also takes traditional subjects — a lover you can't shake, childhood memories, the loss of a pregnancy — and tweaks them into nightmares. In "Cult," a hapless man cannot escape a girlfriend's magnetic draw, even after she stabs him and leaves him for dead. A couple loses their child but retains a stuffed bear with the unborn fetus' heartbeat in "Bear Heart™." A man reconnects with a childhood friend, with whom he had once played a terrifying game of escalation, in "The Punish." Though these stories have a bit more to hold onto, plot-wise, they still possess echoes of that element of uncertainty.

Evenson ... takes traditional subjects — a lover you can't shake, childhood memories, the loss of a pregnancy — and tweaks them into nightmares.

Violence is punishing but unbelievably subtle in Evenson's delicate, minimalist stories. And ultimately, there is something cosmic — something utterly Lovecraftian, but without the baroque language — about this type of horror: Beneath the slippery, often abstruse plots lies a vast gulf of nothingness, in the purest and most unsettling sense of the word.

It's enough to provoke an existential crisis of the highest magnitude, which is precisely how my partner found me: curled up on the couch with all the lights on. Not because I was frightened, exactly. Rather, I'd mainlined A Collapse of Horses, I was thinking about the unknown outermost reaches of the universe and human consciousness, and I could not bring myself to move.