Accessibility links
Rubio Tries To Sell The New Face Of The GOP Establishment To S.C. Voters The Florida senator needs a rebound in the state's GOP primary after a disappointing New Hampshire finish. And he's hoping the backing of the state's young, diverse leadership can help him do that.

Rubio Tries To Sell The New Face Of The GOP Establishment To S.C. Voters

Rubio Tries To Sell The New Face Of The GOP Establishment To S.C. Voters 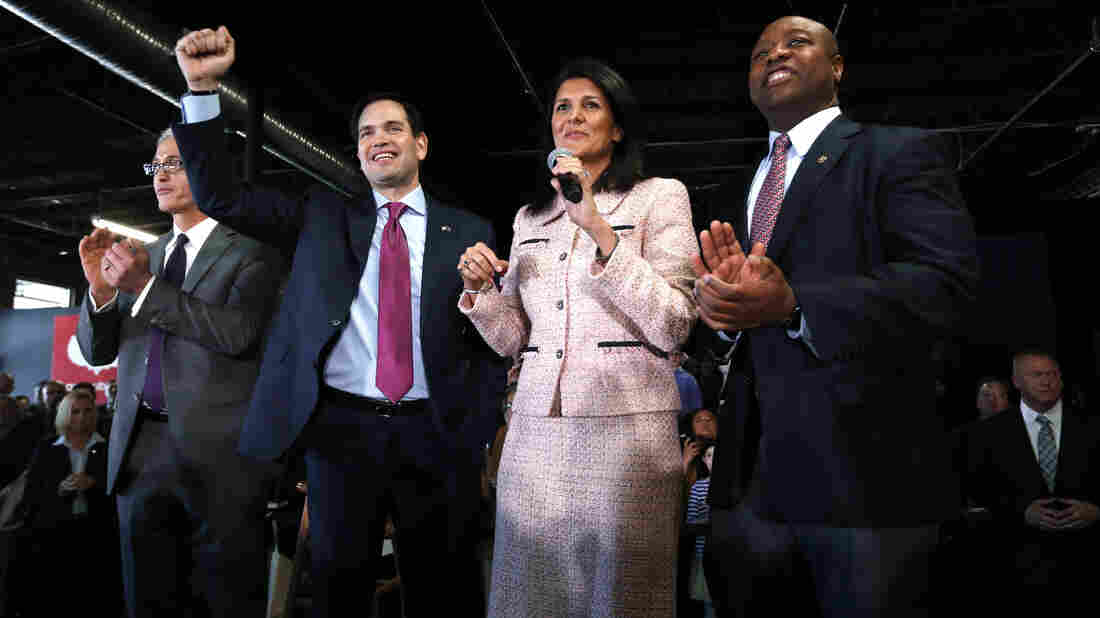 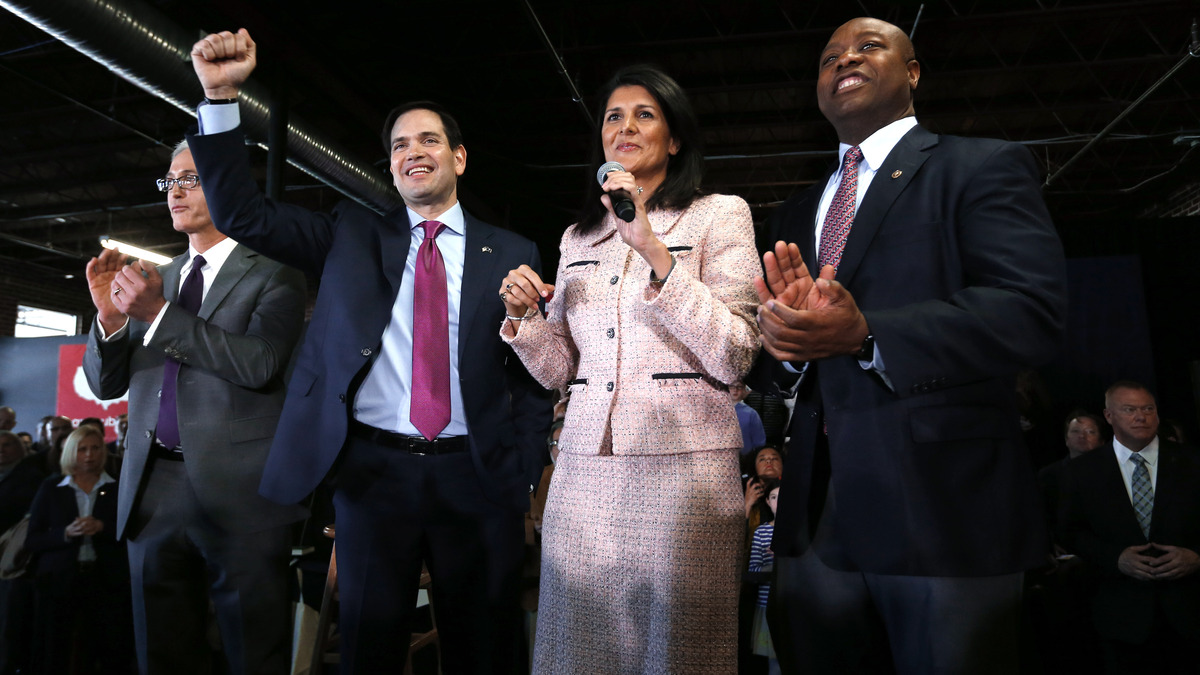 The photo op at the end of Marco Rubio's Greenville rally Thursday morning was the stuff GOP dreams are made of.

The young Latino presidential candidate many top party leaders believe would be their best standard-bearer smiled and cheered, flanked by South Carolina's Indian-American female governor, the state's young black Republican senator and the congressman who's led the investigation into the Benghazi attacks and Hillary Clinton's involvement.

"Take a picture of this, because this new group of conservatives taking over America looks like a Benetton commercial," Gov. Nikki Haley crowed, standing alongside Sen. Tim Scott and Rep. Trey Gowdy on stage in a CrossFit gym re-purposed for Rubio's rally.

That image of a diverse, young Republican Party is one the Rubio campaign wants people to remember. His staff was even making sure press knew the quartet would be on stage together at the end of the event.

Observers in the state think Rubio is the one who is on the rise in the closing hours. And he badly needs a strong finish here, too, to recapture the narrative that he is the establishment's best hope to take down Donald Trump and Ted Cruz.

"This is a great day in South Carolina," Scott boasted as he introduced Rubio. "The cavalry is coming."

The Florida senator has certainly needed some help to get to this point. While his stronger-than-expected third-place finish in Iowa gave him new mojo, last week's disappointing fifth-place finish in New Hampshire after a disastrous debate took some of the luster off the rising star, who at 44, is the youngest candidate in the race.

But he's found new vigor in the Palmetto State. Buoyed this week by Haley's coveted endorsement, the quartet crisscrossed the state together in the final days. And while Cruz is fighting for the evangelical vote, Rubio could build a cross-section of the state's top voting blocs.

Plus, if Rubio pulls off a strong showing in the state, the biggest thing it could do for him is possibly drive former Florida Gov. Jeb Bush out of the contest, further clearing the so-called establishment lane for him heading into Super Tuesday.

It's Rubio who has the backing of the state's top elected officials — the "new establishment" of sorts, hoping that their chosen candidate can be the one to right the Republican ship.

Rubio, Haley, Scott and Gowdy were all elected in the 2010 GOP wave, buoyed by the tea party, and none of them were then the party's preferred candidates. As the Florida senator often says on the stump, the national party wanted then-Republican Gov. Charlie Crist instead. Crist ran as an independent and lost — and is now a Democrat.

Gowdy knocked off Upstate Rep. Bob Inglis in a primary, and Scott first won a congressional seat over several better-known political scions, who had the surnames Thurmond and Campbell. Haley was also the underdog tea party candidate when she first ran six years ago, besting a better funded rivals that included the sitting attorney general and lieutenant governor.

As Gowdy argued to NPR, the group is far from "the establishment."

People Keep Talking About 'The Establishment.' What Is It, Anyway?

So what message should the solidarity of support for Rubio mean? "He's a principled conservative who can win in November," Gowdy said.

For Don Pendleton of Greenville who was at the Thursday morning event, the new endorsements only validated his decision to vote for Rubio.

"I'm very proud to be from South Carolina and have Nikki Haley out for him," Pendleton said. "It made me feel like I made the right decision. I feel like it's an All-Star team."

Larry McGriff of Greenville was undecided when he came to the rally, but he left leaning strongly toward Rubio over Cruz. To him, the trio of endorsements for Rubio carried some weight.

"I'm very much a fan of Trey Gowdy, Tim Scott and the governor," McGriff said. "She's been a great governor. I wouldn't say that it had pushed me strongly in one direction for Gov. Haley to give an endorsement, but it certainly didn't hurt."

South Carolina Republican strategist Chip Felkel said there's no question Rubio has momentum going into Saturday's vote, but will it be enough?

"I just don't know if it's enough. If anybody's got momentum, you've certainly got to think it's Rubio."