Accessibility links
Stand-Up Comedy Bridges Boundaries Between Pakistan And India — By Crossing The Line In Pakistan, a stand-up comic is sharing the stage with another comedian from the old enemy, India. The comics believe laughter is the best medicine for their conflict-blighted region. 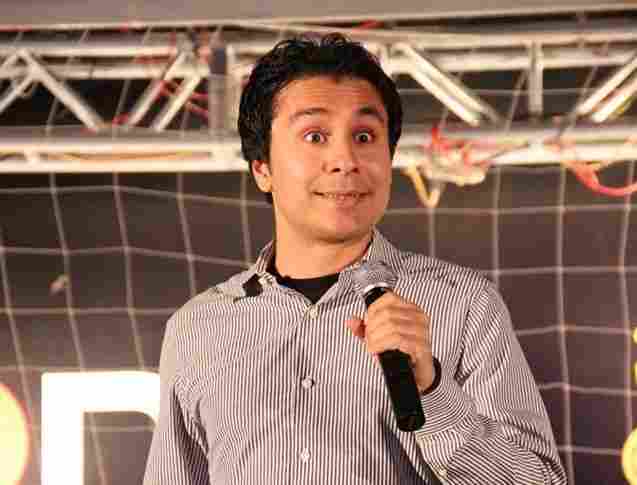 Pakistani stand-up comedy pioneer Saad Haroon tests cultural sensitivities between his native country and India in his material. "When it comes to satire, I think as a culture, we kind of struggle with it," he says. Facebook hide caption 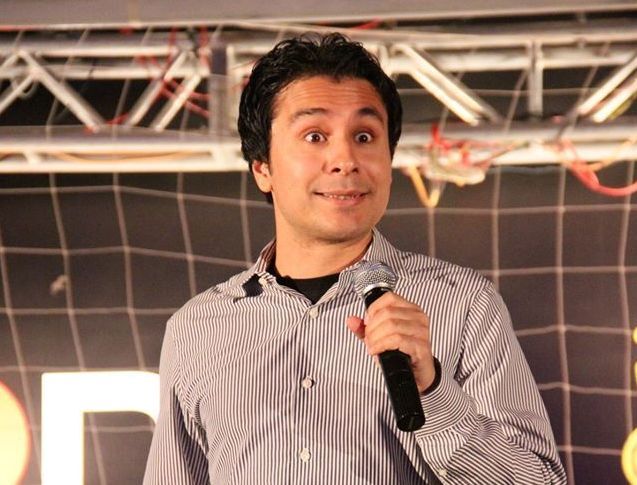 Pakistani stand-up comedy pioneer Saad Haroon tests cultural sensitivities between his native country and India in his material. "When it comes to satire, I think as a culture, we kind of struggle with it," he says.

In Pakistan, there aren't a whole lot of stand-up comics.

"When it comes to satire, I think as a culture, we kind of struggle with it," says Pakistani stand-up pioneer Saad Haroon.

His humor shines a light into some delicate areas.

"I wrote this song called 'Burqa Woman,' which is a parody of 'Pretty Woman,' " Harron says.

He gives the audience a taste of his act:

Burqa woman, in your black sheet

Burqa woman, with your sexy feet

Burqa woman, my love for you, it grows

Every time I see your nose

Haroon's presenting a talk about comedy at the city of Karachi's literature festival along with Sanjay Rajoura, a writer and comedian from neighboring India. Hundreds of people are crammed into a hall to learn about something they rarely see.

"By definition, you know, comedy has to offend someone," Rajoura says.

India and Pakistan have a seven-decade history of animosity. It isn't long before a man in the audience starts heckling Rajoura over Kashmir, a core part of the dispute between the two nations.

Rajoura responds with a joke, then Haroon steps in.

"What is your problem, sir? He's a guest in our country! Let's show him a little welcome," Haroon says.

This audience, a mostly young crowd, responds with thunderous applause. They want to know how the comics prepare their acts and how far they can push their comedy.

"I want to ask you: Where do you draw a line between what is a joke and what isn't a joke — and if there is a line?" says a young woman.

Some subjects do require careful handling, especially in a country like Pakistan where the military wields great power.

"I was just saying that whenever you start cracking jokes about the army, the plot thickens," says Haroon.

Haroon, who spends a lot of time in the U.S., is asked if it's different performing stand-up there.

He says he did a gig not long after the Paris terrorist attacks, and afterwards, a man came up to him.

I ask Rajoura why he, an Indian, came to Pakistan.

To see friends, he says casually. He adds, "I like to come to Pakistan and talk about peace and a lot of other stuff. Somehow or the other I am doing my bit. I dunno whether it is going to help or not."

Working for peace through comedy's an ambitious undertaking in South Asia.

Risqué or politically edgy humor can land you in trouble in India as well as Pakistan. Rajoura shrugs this off.

"If they want to shoot me, they shoot me. But I won't stop talking, because this is where the next nuclear war will happen. We have to fight it, and if we just sit in your living rooms saying — I don't want to say this — I'm gonna get shot. You'll die anywhere you know, so I am not scared."

Saad Haroon doesn't seem at all scared either. He says there's no shortage of comedy material to work with in South Asia.

After all, Indians and Pakistanis often laugh at the same jokes.

"Like, I can't even start to get into it, the similarities. I mean, I think our people literally try to keep each other apart. We need boundaries, we need fences, we need visas, we need planes," Haroon says.

If the warm reception given here to these two comedians is anything to go by, maybe comedy might just bring down a few of those boundaries and fences.