Funeral services were held today for the late Supreme Court Justice Antonin Scalia at the Basilica of the National Shrine of the Immaculate Conception.

Justice Antonin Scalia, who died last Saturday, was buried today after a funeral mass attended by more than 3,000 people in the nation's capital.

MARTIN: At the Basilica of the National Shrine of the Immaculate Conception, it seemed much of legal Washington was there, Republican and Democrat. The justices themselves, lawyers who argued before them, judges of the lower courts, three of whom have been mentioned as possible nominees to be Scalia's successor and literally thousands of friends and neighbors of the man known to them simply as Nino. NPR's legal affairs correspondent Nina Totenberg reports.

NINA TOTENBERG, BYLINE: This was, as one of the justice's friends put it, Nino's last opera. Sitting behind the altar were Cardinal Wuerl, archbishop of Washington, in scarlet robe and cap, along with 108 priests and bishops and 39 deacons. The National Shrine is the largest Catholic church in North America, decorated with brilliantly colored mosaics on the walls. And this mass did have all the rituals of a grand opera - a parade of priests carrying a sparkling gold cross, incense, gorgeous music and of course, the Scalia family, including wife Maureen, nine Scalia children and most of the 28 grandchildren. The principal celebrant of this mass was the justice's son Paul, a Catholic priest.

PAUL SCALIA: Pray brethren that my sacrifice and yours may be acceptable to God, the Almighty Father.

TOTENBERG: No eulogies, only Father Paul's homily in which he referred to his father simply as dad.

SCALIA: He loved the clarity and coherence of the church's teachings. He trusted the power of her sacraments as the means of salvation, as Christ working within him for his salvation.

TOTENBERG: Although, said Paul, his father had once scolded him for hearing confession on a Saturday.

SCALIA: The issue that evening was not that I'd been hearing confessions but that he had found himself in my confessional line.

SCALIA: And he quickly departed it.

TOTENBERG: Father Paul choked up only once when speaking of his father, saying he was blessed by a marriage of 55 years to the woman he loved, a woman who could match him at every step and hold him accountable. Most of the homily was devoted to a description of Justice Scalia's love of his Catholic faith and love of country. He understood, said Father Paul, that there was no conflict between the two.

SCALIA: He knew well what a close-run thing the founding of our nation was. And he saw in that founding, as did the founders themselves, a blessing, a blessing quickly lost when faith is banned from the public square or when we refuse to bring it there.

TOTENBERG: At the end of the mass, Father Paul incensed the cast casket in the final commendation, and it was carried out by the justice's sons and sons-in-law. 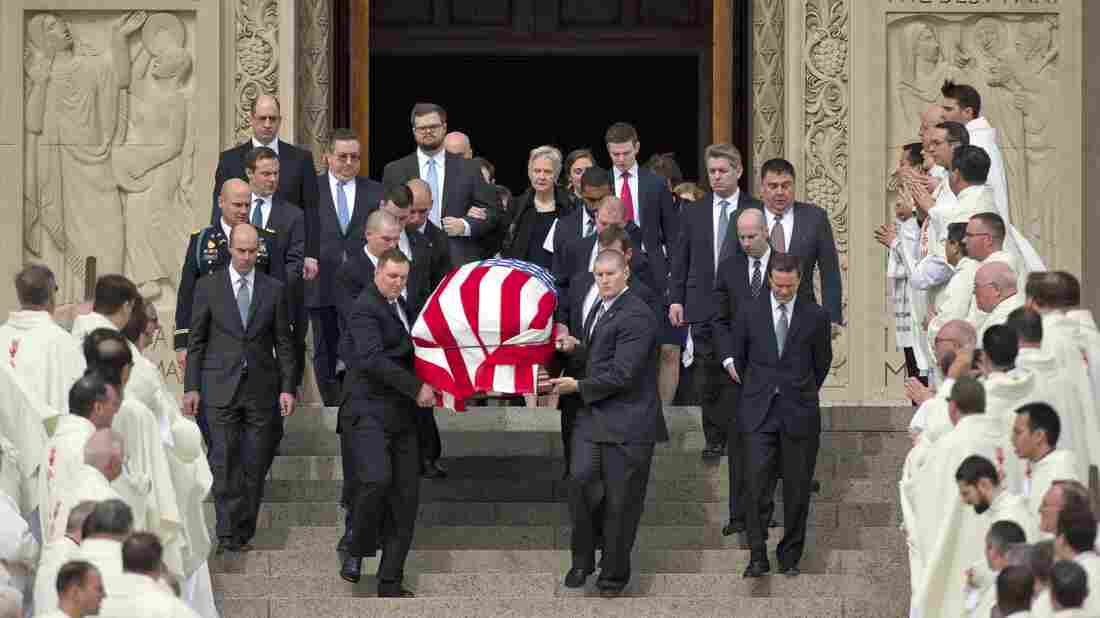 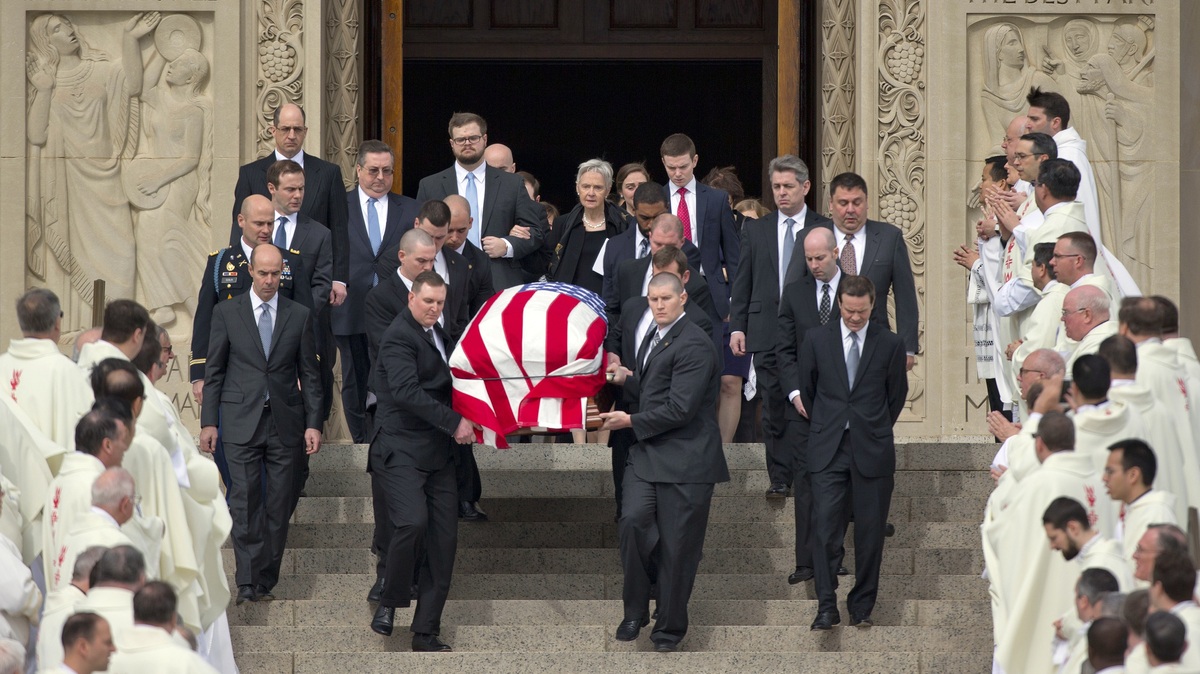 The casket containing the body of the late Supreme Court Associate Justice Antonin Scalia leaves the Basilica of the National Shrine of the Immaculate Conception in Washington following funeral mass services on Saturday.

The towering conservative jurist will be buried in a private ceremony following the service at the Basilica of the National Shrine of the Immaculate Conception, NPR's Nina Totenberg reports to our Newscast unit.

"The shrine, a colorful and large church, is not far from where the justice served for some 30 years," Nina says.

"Scalia's sons and sons-in-law served as pallbearers to carry his flag-draped casket up the steps of the basilica," the Associated Press reports.

Scalia's son Paul, who is a Catholic priest, conducted the service and delivered the homily. 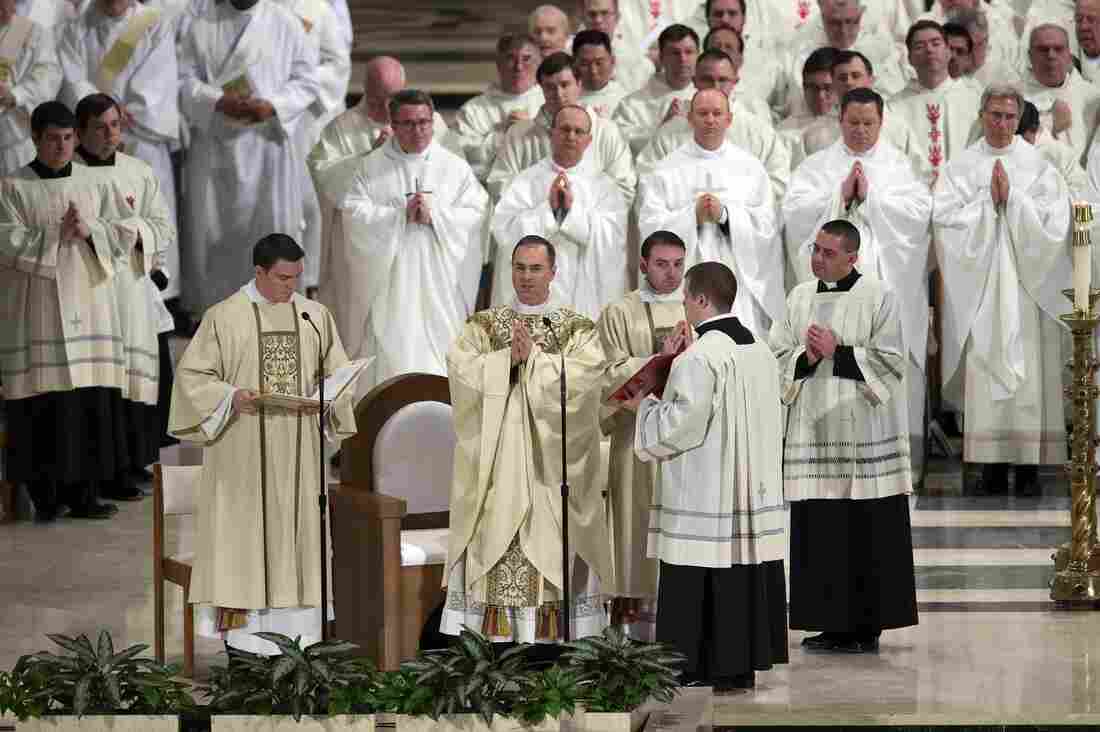 The Rev. Fr Paul Scalia, son of the late Supreme Court Associate Justice Antonin Scalia, center, leads the funeral mass for Justice Scalia, at the Basilica of the National Shrine of the Immaculate Conception in Washington on Saturday. Doug Mills/AP hide caption

Here's an excerpt, which focuses on Scalia's role as a father:

"We have been thrilled to read and hear the many words of praise and admiration for him — for his intellect, his writings, his speeches, his influence and so on. But more important to us — and to him — was that he was Dad. He was the father that God gave us for the great adventure of family life. Sure, he forgot our names at times or mixed them up, but there are nine of us. He loved us and sought to show that love. And sought to share the blessing of the faith he treasured. And he gave us one another, to have each other for support. That's the greatest wealth parents can bestow, and right now we are particularly grateful for it."

Supreme Court Justice Clarence Thomas read a biblical passage from the Book of Romans during the service.

Scalia died at a Texas ranch one week ago. He was 79.

"Dignitaries including Vice President Joe Biden, former Vice President Dick Cheney, members of Congress and all eight sitting justices of the Supreme Court were among those attending. Four of the five Catholic justices took communion," The Associated Press reports.

On Friday, Scalia's body lay in repose in the Great Hall of the Supreme Court. Barack and Michelle Obama paid their respects there, and did not attend the funeral service on Saturday.

Nina says "Scalia is only the fourth justice to die in office in the past 65 years, and there is no consistent pattern of presidential attendance at court funerals."