Accessibility links
Jeb Bush Drops Out Of Presidential Race After failing to gain any traction in the GOP presidential race, Jeb Bush has ended his run for the White House. NPR's Rachel Martin speaks to Mark McKinnon, a former Republican media strategist.

After failing to gain any traction in the GOP presidential race, Jeb Bush has ended his run for the White House. NPR's Rachel Martin speaks to Mark McKinnon, a former Republican media strategist.

As we heard, Jeb Bush suspended his presidential campaign after another loss, in South Carolina this time. Here's a bit of his speech to his supporters last night.

JEB BUSH: I thank all of the Jeb alumni, many of them who are here, that have been going door to door all across the country, who have put their lives on hold for this cause. And I want to thank my mom and brother who came here to South Carolina. America truly loves them and respects them, and so do I.

MARTIN: We're going to turn now to Mark McKinnon for his perspective on the Republican presidential race and the Bush family legacy. McKinnon served as the former chief media adviser to John McCain and George W. Bush.

Thanks so much for being with us, Mark.

MARK MCKINNON: Hey, thanks for having me. Good morning.

MARTIN: Jeb Bush had the money. He had the name recognition. He had the resume. What happened?

MCKINNON: Well, he's part of a political establishment that's been in politics for about 50 years, and that's the last thing Republican voters want right now. I mean, they are angry and mad. And they don't want to see anything that they've seen before, so they overthrew the dynasty and voted (laughter) for a guy who took on the Vatican this week.

MARTIN: Did the Bush campaign just see the writing on the wall? Or do you think the Republican National Committee exerted some pressure to get him to drop out so voters can coalesce around other candidates?

MCKINNON: Oh, no. I think it was quite clear to Jeb and the rest of the campaign. They knew they had to do well coming out of South Carolina. Otherwise, there was no rationale for donors to carry on beyond South Carolina.

MARTIN: Do you think Donald Trump is on his way to becoming the nominee?

MCKINNON: Pretty good chance. I mean, he comes out with a significant victory out of South Carolina. He's shown now that he's won two out of three states. (Laughter) You know, in order to get the nomination, you have to win states, and he's now won two. And he also benefits from the fact that he has a divided field now between Cruz and Rubio. They're going to divide up votes and - which allows him to coalesce the rest of those votes and have a good chance going into Super Tuesday and the larger states in the South.

MARTIN: So do you think there are conversations among some so-called establishment Republican Party leaders who are saying we have to get one of these two men to leave the race? There must be one established alternative to Donald Trump.

MCKINNON: Well, the problem with that is that Ted Cruz is not an establishment candidate. I mean, he - although he's been in the Senate, there's been nobody that's been more antiestablishment than Ted Cruz. So there's not going to be any deals between the Cruz and Rubio supporters at all, which makes it problematic for them, and it benefits Donald Trump.

MARTIN: What are you learning about the Republican Party in this election that you didn't know before?

MCKINNON: Well, it makes me think about 1992 when Ross Perot ran. You know, you looked at the - sort of what the country was going through at that time, and people felt pretty bad about politics and the direction of the country. And so it created a huge opening for a businessman outsider. Well, if you look at those fundamentals today, they're, like, 10 times worse than they were in 1992. So you know, the fact that the country's in the shape that it's in - it really shouldn't be a surprise that a businessman outsider's having such an appeal to Republican and independent voters. So you know, it says that the Republicans - you know, I think the Democrats - with Hillary Clinton winning - are, you know, they're on their way to probably a coronation and, you know, a third term for Obama. What the Republicans want is a revolution.

MARTIN: Lastly, just briefly - final thoughts on what this means for Jeb Bush and his family and that legacy?

MCKINNON: You know, it's - it was bittersweet last night. I mean, it was great to see my former boss 43 (laughter), George W. Bush, come out and Barbara Bush come out and the whole family come out. You know, it's a great political family. And I think even if you disagree with their politics, there's just a lot of goodwill for the Bush family. And it was hard to see somebody go through what Jeb went through. But he was - you know, he was very dignified last night. And I think he goes out with a lot of goodwill, although not a win.

MARTIN: Mark McKinnon is a GOP strategist and the co-executive producer and co-host of a weekly documentary series about the election. It's called "The Circus." It airs on Showtime. Mark, thanks so much. 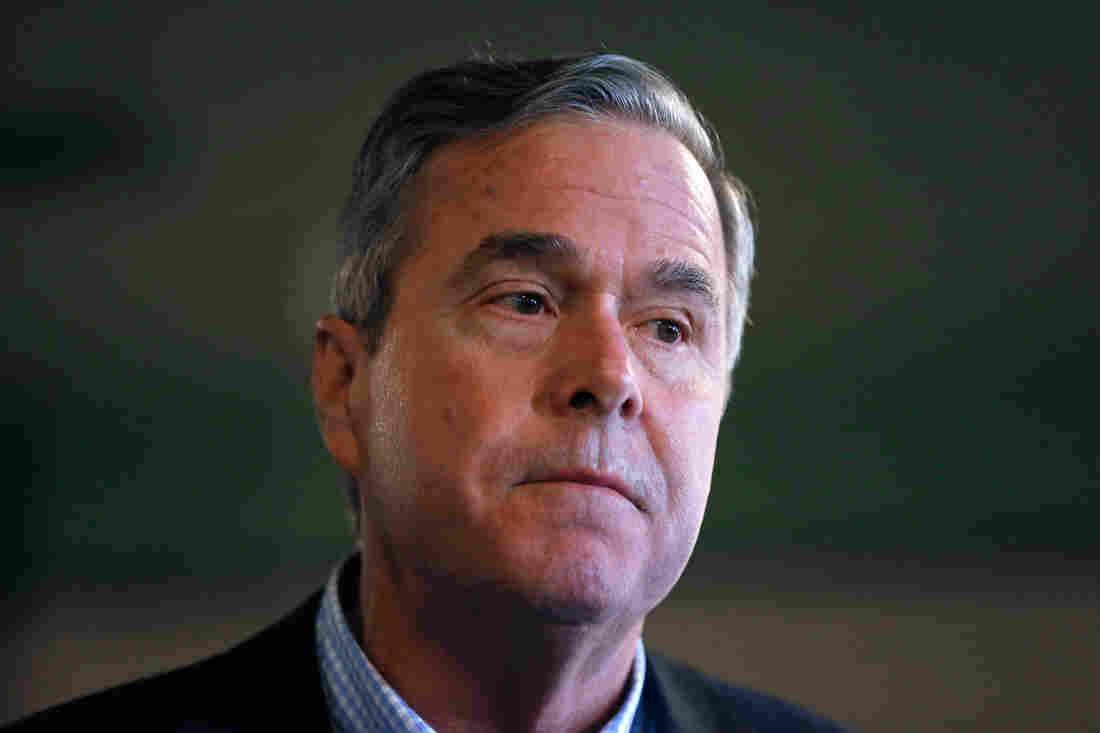 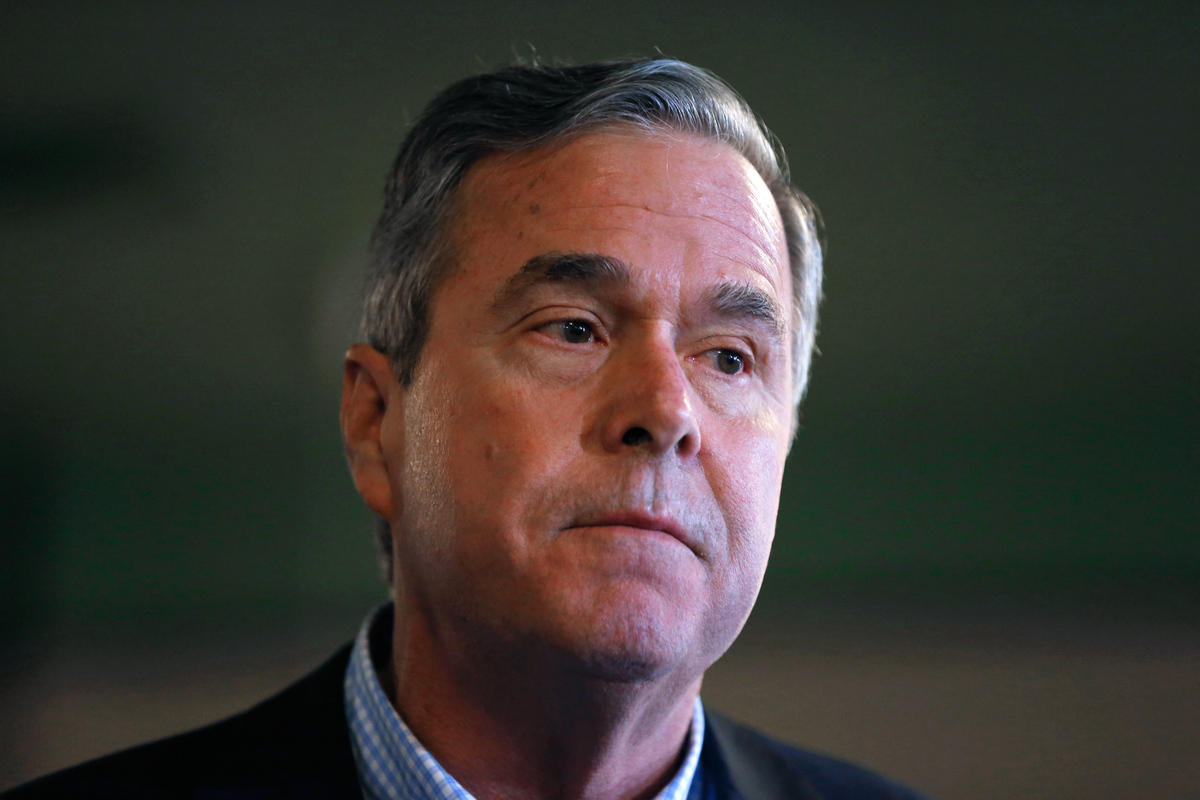 Former Florida Gov. Jeb Bush listens to a question during a campaign stop at Wade's Restaurant on Friday in Spartanburg, S.C.

Jeb Bush is ending his campaign for president after a disappointing showing in the South Carolina primary.

"The people of Iowa and New Hampshire and South Carolina have spoken, and I really respect their decision," the former Florida governor told his supporters gathered in Columbia on Saturday night. "So tonight, I am suspending my campaign."

"I congratulate my competitors, that are remaining on the island, on their success in a race that has been hard-fought, just as the contest for the presidency should be because it is a tough job," he continued.

The son and brother of the past two Republican presidents entered the race with all the signs of the classic front-runner: endorsements from other top officeholders, a massive campaign war chest and name-brand campaign consultants.

Bush sought to campaign as an optimistic champion of pragmatic conservative values — but his positions in favor of overhauling immigration laws and educational standards put him out of step with an increasingly conservative Republican electorate that was hungry for an outsider, not the ultimate insider.

His perceived momentum quickly stalled as it became clear that voters in both parties are shunning experienced politicians. Onetime protege Marco Rubio passed him in the polls, and Bush moved farther and farther to the side of the stage in the candidates' presidential debates.

In New Hampshire last week, Bush was left defending his family to voters eager for a change. "I'm proud of my dad. I'm proud of my brother. I'm proud of being a Bush," he told a crowd in Derry. "The Bush thing, people are just going to have to get over it," he said at a later town hall in Portsmouth.

South Carolina this week felt like it was do or die for Bush, and indeed it was. In retrospect, his campaign had the aura of a farewell tour as he brought in his brother, former President George W. Bush, and his mother, former first lady Barbara Bush to try to catch fire. He hoped to do well in the military-friendly state, which both his father and his brother had carried. Instead, the Palmetto State marked the end of the road for the once-promising candidate.

Despite spending far more money than any other campaign on television advertising and his allied superPAC dropping millions to attack his rivals, Bush garnered less than 3 percent of the vote in Iowa and placed fourth in New Hampshire. He's on pace to finish a distant fourth or fifth in South Carolina.