Accessibility links
Republican Candidates Look To Appeal To Nevada's Changing Conservatives The five remaining Republican candidates are aiming to gain an edge with Nevada voters before Tuesday's caucuses. But the issues important to conservatives vary. 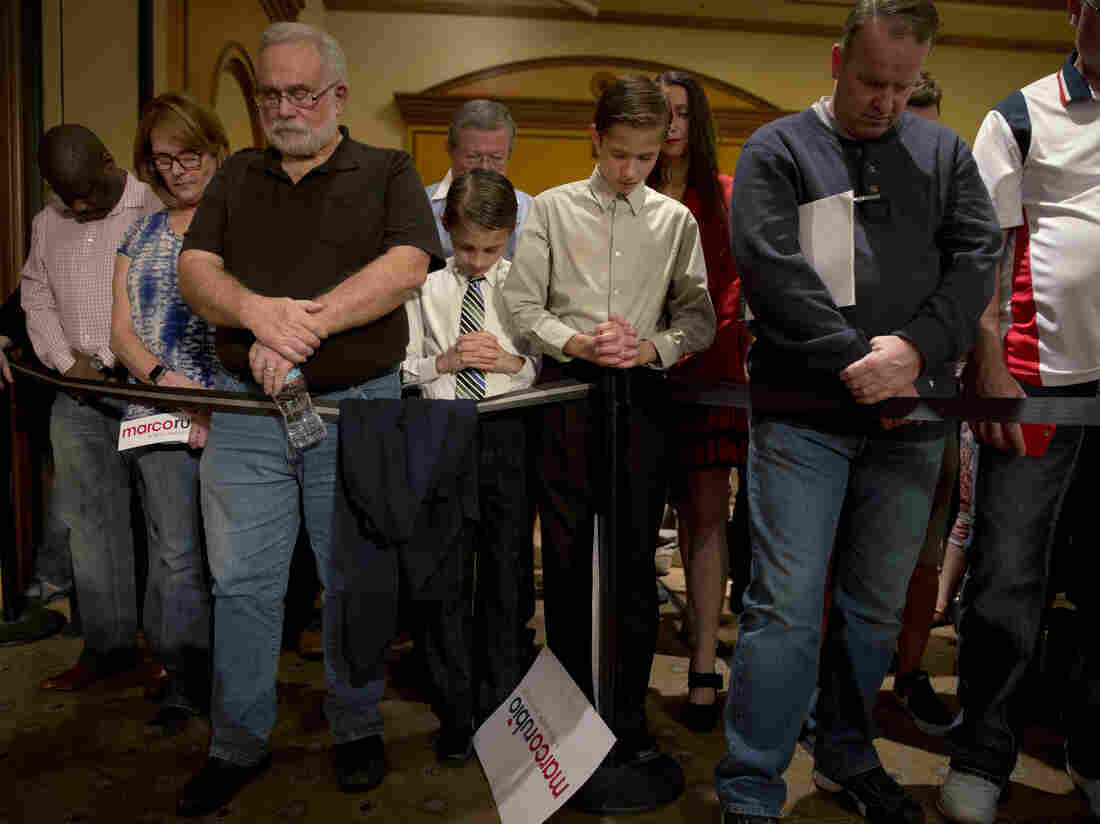 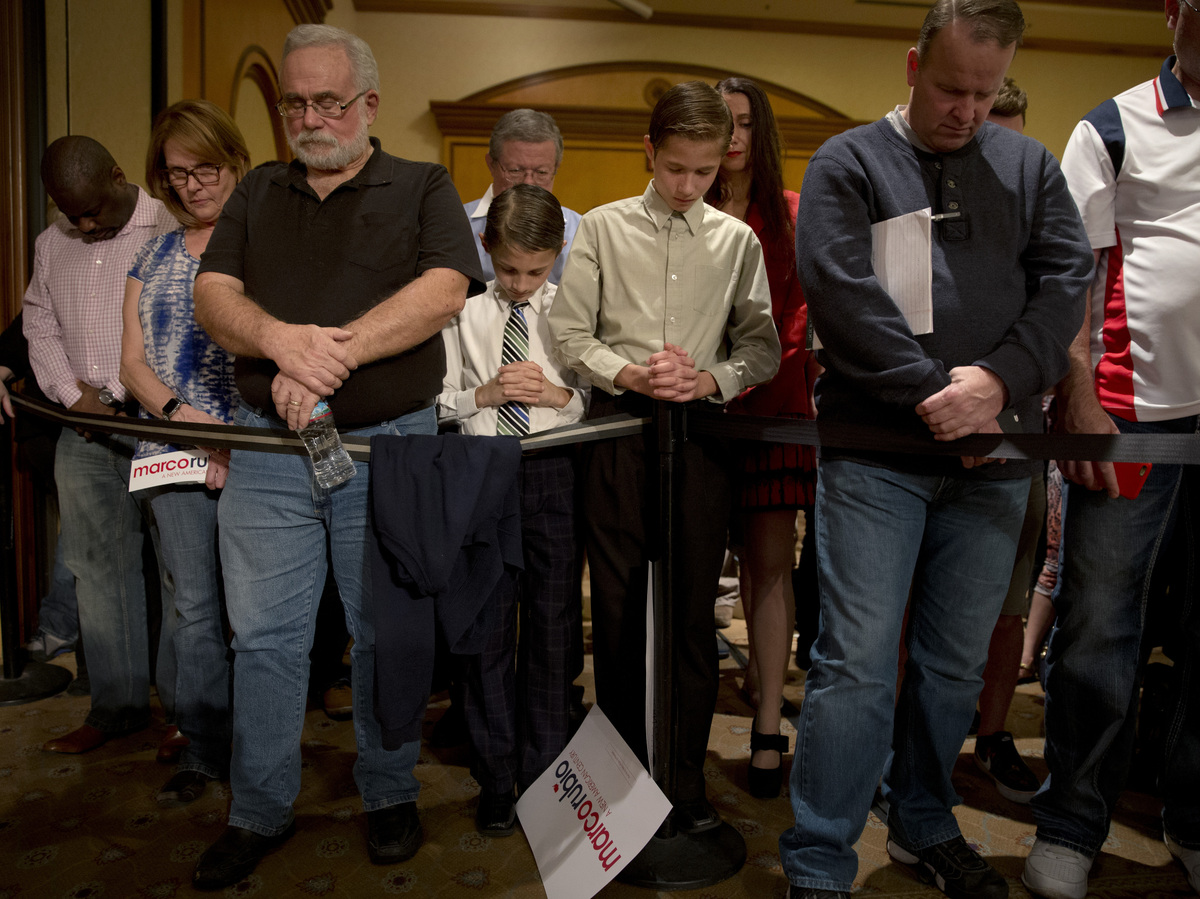 People pray before the start of a rally Sunday with Republican presidential candidate Marco Rubio, in North Las Vegas, Nev.

Nevada is a complicated state. Especially if you're a Republican politician looking to appeal to the state's increasingly wide variety of conservative voters. There are sprawling, diverse urban centers like Las Vegas and there are places on the side of highways that you could miss altogether if you were busy changing the radio. Lovelock is one of those places.

It's a rural town of about 2,000 people in the northern part of the state. There are six churches, a few bars and one stoplight in town, surrounded by miles of desert and sage. To get an idea of the type of people who call it home, look under the seats at the Pershing County Courthouse, and you'll find wire hangers to store your cowboy hat during proceedings.

Mining, farming and ranching are the big industries in Lovelock, as they are in most of rural Nevada. Conservative values are the political flavor.

In Lovelock's Cowpoke Cafe, almost all the clientele identify as Republicans or independents. 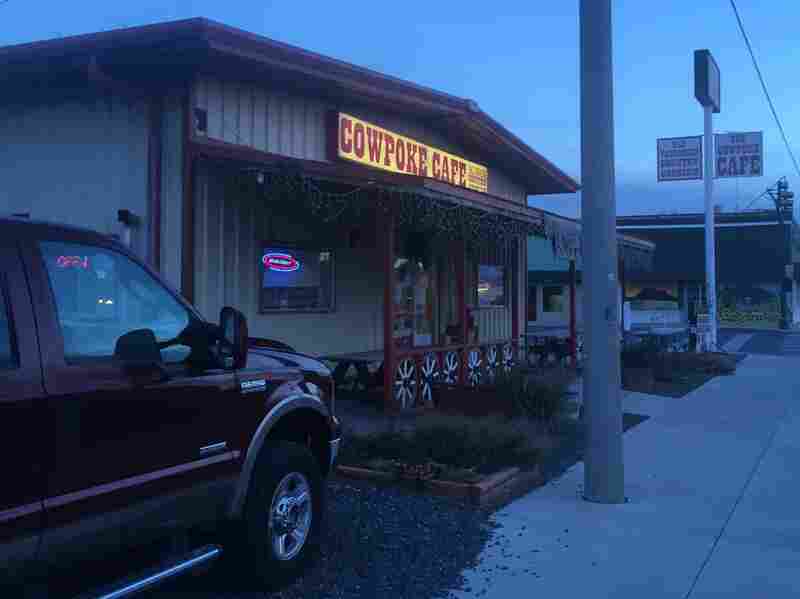 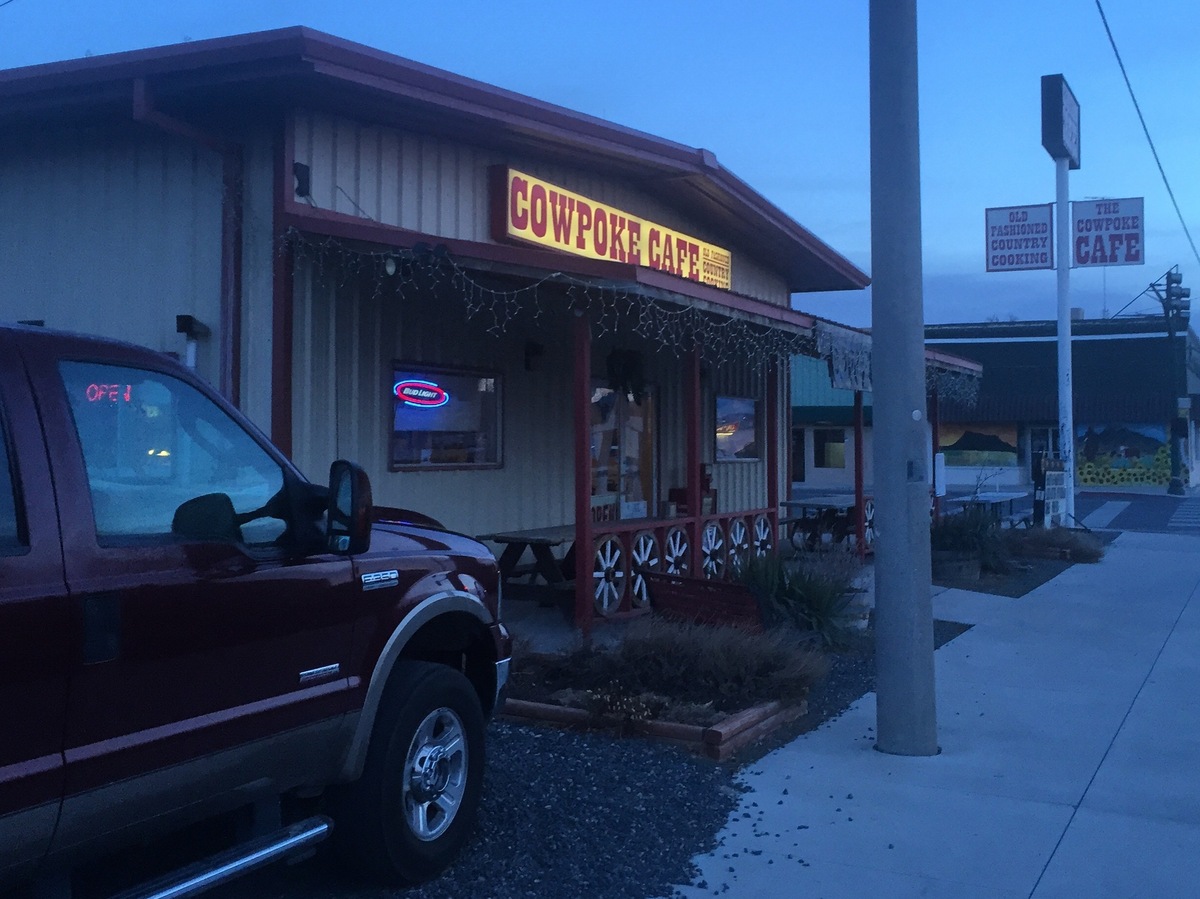 The Cowpoke Cafe in Lovelock, Nev., is a pre-dawn gathering spot for the mostly conservative ranchers, farmers and miners who call Pershing County home.

But there's little consensus on who, if any, of the five remaining Republican presidential candidates best speaks to the place.

John McMullan likes Donald Trump, he says, because "He's done something. He's a businessman. Rest of them haven't done much, have they?"

Ballard, who works in mining, says she supports Ted Cruz. Another miner, who prefers not to be named, grumbles that he thinks Cruz is full of ... Well, you get the idea. Folks here in Lovelock don't mince their words.

That's especially true when it comes to the issue of public lands. If there's anything in Lovelock that everyone can agree on — besides the quality of the prime rib at the Cowpoke — it's the idea that the federal government has an outsized presence in rural Nevada.

"They own 85 percent of Nevada and they want more," says Jack Cooney. "They want it all."

That sentiment is shared in most of Nevada's rural towns and counties - and in a lot of the rural West - where people are angry about mining restrictions to protect the sage grouse population, and grazing regulations because of drought.

That's not to say that people here are like Cliven Bundy, the rogue rancher who led an armed standoff with the federal government over grazing fees, or his son Ammon, who led the armed occupation of a federal wildlife refuge in Oregon, but people here sympathize with their plight.

"What the Bundys did, I don't agree with," says Bing Wesner. "But their reasoning for doing what they did was correct."

The Republican Field and Public Lands

People like Wesner want to see the Republican presidential candidates talk about public lands more in their campaigns.

To date, Texas Sen. Ted Cruz has taken the strongest stance on the issue, saying he supports the idea of returning federal lands to the states. He's even put out television ads featuring photos of weathered Nevada ranchers, herds of cattle and the Texas senator himself, boldly declaring in a yellow flannel shirt: "If you trust me with your vote, I will fight day and night to return full control of Nevada's lands to its rightful owners: Its citizens."

When it comes to the public lands issue, other Republican candidates have been more cautious.

In an interview with the Des Moines Register's editorial board, Florida Sen. Marco Rubio said that he thinks the federal government owns entirely too much land, using Nevada as an example, but he didn't say he'd transfer ownership back to the states.

Ben Carson told the Las Vegas Review-Journal editorial board that he would "advocate returning lands to the states."

Republican frontrunner Donald Trump went the other way, telling Field and Stream Magazine that he doesn't like the idea at all.

That may seem puzzling, because there's little doubt after meeting with Nevada's rural voters that public lands is the big issue for them. If you want their support, saying you'd transfer federal lands to states seems like pretty low-hanging fruit. So why not?

The reason, says Eric Herzik, the chair of the political science department at the University of Nevada, Reno, is that it might hurt a candidate more than it helps.

Nevada is not as rural as you might think. Not even close. In the 2010 census, 94 percent of the state's population lived in urban areas. And while that rural, outlaw, libertarian spirit still lives on in those urban places like Las Vegas and Reno, it's not nearly as intense there as it is in a place like Lovelock.

"You'll have plenty of people that want to shrink the size of government, but they don't necessarily go along with the rural agenda as well," says Herzik, referencing the idea of transferring federal lands to the states. "These more pragmatic Republicans, I'll call them, say that means the state has to manage [that land]. And pay for it."

Herzik says that's not an appealing proposition for a fiscal conservative, who doesn't live in a rural area.

Squaring those two ideologies — between the state's traditional, rural conservatives and its growing urban conservatives — is the challenge facing the Republican candidates in Nevada today.

"Can they create this broader coalition?" Herzik says, of urban and rural, new and old.

Washoe County is probably the best example in Nevada of a place where those two worlds meet. With nearly a half-million residents, it's the second-most populated county in the state. In its southern end are Reno and Sparks, the only two incorporated towns in the county. Further north it's rural.

Adam Khan, the chairman of the county's Republican Party, says he's seen it go from a mostly rural area to an urban and industrial center, with more young people and out-of-towners.

"Now we have companies like Tesla and Switch that are coming here," he says. "We're becoming more of a tech-startup place."

The issues conservative voters care about have changed with the times. Instead of grazing fees or federal lands, younger voters in Washoe County such as Khan are more worried about net neutrality and government surveillance.

Even though that may seem a world away from the concerns of folks in rural places like Lovelock, Khan says it's not.

The question is, which Republican candidate will best be able to harness that sentiment — in all of its forms — before Tuesday's caucuses.